Trump is fixated on maintaining his base

As his Florida kickoff rally nears, polling suggests he is right

to be worried about losing support. 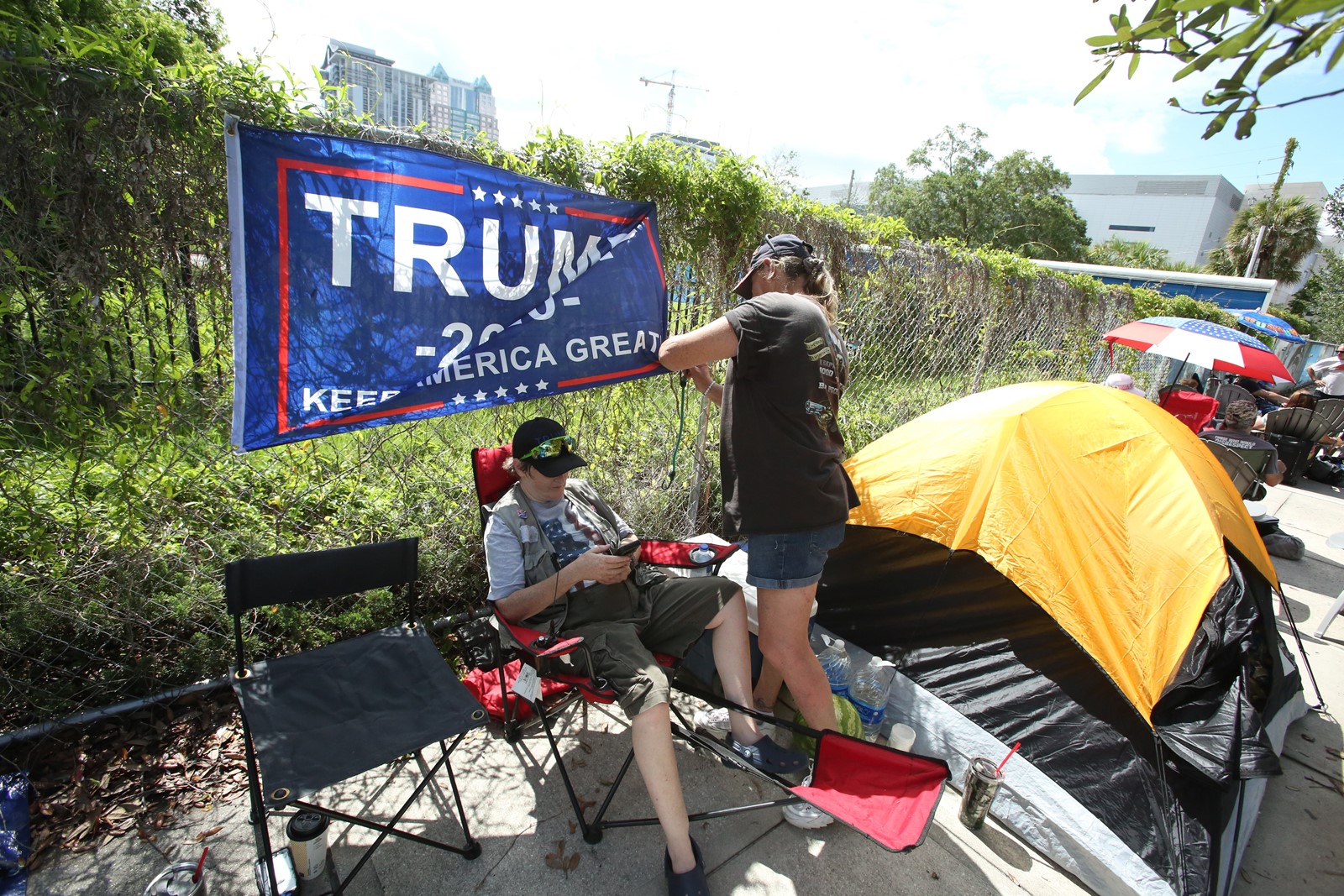 Early in his improbable 2016 run for president, Donald Trump boasted he could shoot someone in the middle of New York’s Fifth Avenue and he “wouldn’t lose any voters, OK?”

President Trump will kick off his reelection campaign Tuesday at a rally in Orlando, Fla., and he is likely to make a full-throated pitch to keep his ardent supporters in line. Polls suggest he is right not to take his base for granted.

Trump won last time by holding Republican areas in the South and West, and cracking Democratic strongholds in a handful of key Rust Belt states, by focusing on immigration, trade and the alleged misdeeds of his opponent. Whether he can do so again is an open question.

“You always have to have your base, but it sure helps to have a majority in American elections,” said Whit Ayres, a Republican pollster whose clients include Florida Sen. Marco Rubio, a former rival to Trump.

Trump is behind in early polling, losing in theoretical matchups with some Democratic primary candidates in battleground states, including Florida.

Trump will speak Tuesday night in downtown Orlando, a city considered a linchpin of the voter-rich Interstate 4 corridor that crosses the diverse state. Some fans lined up outside the 20,000-seat Amway Center on Monday, more than a day before Trump is scheduled to take the stage.

Trump won Florida last time, but it almost always is decided by a hair-thin margin in presidential elections. He has spent as much time courting voters in the state as anywhere else, suggesting his campaign believes the state will once again be in play.

Trump began campaigning for reelection days after he won in 2016, holding nine victory rallies before he moved into the White House. All were in states he had won — including Florida, Iowa, Pennsylvania and Michigan — foretelling the political strategy Trump has embraced since taking office.

Since then, he has rarely sought to expand his appeal, as other White House incumbents have done. Instead, the president has geared his rhetoric, policies, travel and campaign apparatus almost exclusively toward the voters who unexpectedly put him in office.

It’s a high-risk strategy, but Trump may have few options.

He lost the popular vote to Hillary Clinton but won the election by turning a handful of traditional Democratic counties in Michigan, Wisconsin and Pennsylvania. He won the three states by a combined total of 77,780 votes.

Some of those voters presumably have died in the last two years, or grown disaffected, meaning Trump needs to find replacements and hope he can exploit flaws in the Democratic nominee, as he did against Clinton.

Ekins, the Cato Institute pollster, has scrutinized Trump’s voters since 2016 using data gathered by the Voter Study Group, a bipartisan coalition of analysts.

She initially divided Trump’s base into five segments, from disengaged voters who knew or cared little about policy to a hardcore group she dubbed “American preservationists,” whose nativist views on immigration and trade track closely with Trump’s.

While Trump won over some blue-collar Democrats, he also needed traditional Republicans to beat Clinton.

As a result, Ekins found that many of Trump’s voters hold conflicting views on key issues, including whether to give tax breaks to the wealthy, as Trump has done in his tax reform legislation, and on immigration and trade, his signature causes.

About 1 in 5 Trump voters that Ekins studied, a group she dubbed the “anti-elites,” was alarmed at alleged charges of cronyism and corruption in Clinton’s past — but now see the same problems in Trump’s scandal-plagued administration.

Many voted for Democrats in the past and hold more moderate views on the economy and entitlement spending than other Trump voters. Ekins says the president is in danger of losing at least some of them.

After Trump had been in office one year, about 20% of those voters said they regretted voting for him. That did not mean they would have chosen Clinton, but it suggested another Democrat could win their votes.

In more recent polling, a majority of these voters said they still disliked the president personally, underscoring their openness to other candidates.

Though crowds at Trump’s rallies cheer when he mocks congressional oversight of his finances, his businesses and his administration, this group of voters apparently isn’t convinced.

Only 1 in 4 said it would be “appropriate” for Trump to ignore congressional subpoenas demanding administration documents and testimony. Other Trump voters are more forgiving of his attempts to thwart Congress.

Trump clearly has decided voters are not concerned about his ethical lapses and unconventional behavior.

Last week, he told ABC News that he saw nothing wrong with accepting dirt on his political opponents from foreign governments even though his 2016 campaign’s contacts with Russian operatives and officials helped spark a special counsel investigation that led to U.S. indictments or charges against 34 people.

At least in public, Trump remains outwardly confident in his reelection prospects. His campaign is wealthier and better organized than before, with strong support from a Republican Party that disdained him as a gate-crasher last time. Moreover, the nation’s economy is strong and growing, normally key to an incumbent’s victory.

Even as Trump has turned off many voters, large parts of his base have grown more committed over the last two years as partisan divisions have hardened.

He has moved mainstream Republican opinion to his hard-line views on immigration and trade. Once-skeptical fiscal conservatives have generally rallied to him, and were rewarded with the 2017 tax cut and the confirmations of conservatives Neil M. Gorsuch and Brett M. Kavanaugh to the Supreme Court.

And social conservatives, despite early reservations about Trump’s personal behavior, have become his biggest boosters.

“For somebody who once held a pro-choice view on abortion, this is a person in word and in deed who has done more than any other president,” said Henry Olsen, the author of “The Four Faces of the Republican Party.”

Olsen cited Trump’s efforts to ban transgender individuals in the military and his live video address to the March for Life in 2018, an annual antiabortion gathering in Washington, a presidential first.

“That’s the sort of thing that people in the pro-life community always noticed, that the head guy doesn’t want to have the photo-op with us,” Olsen said.

As a result, religious conservatives have become a bedrock group for Trump because they believe he has delivered on his promises.