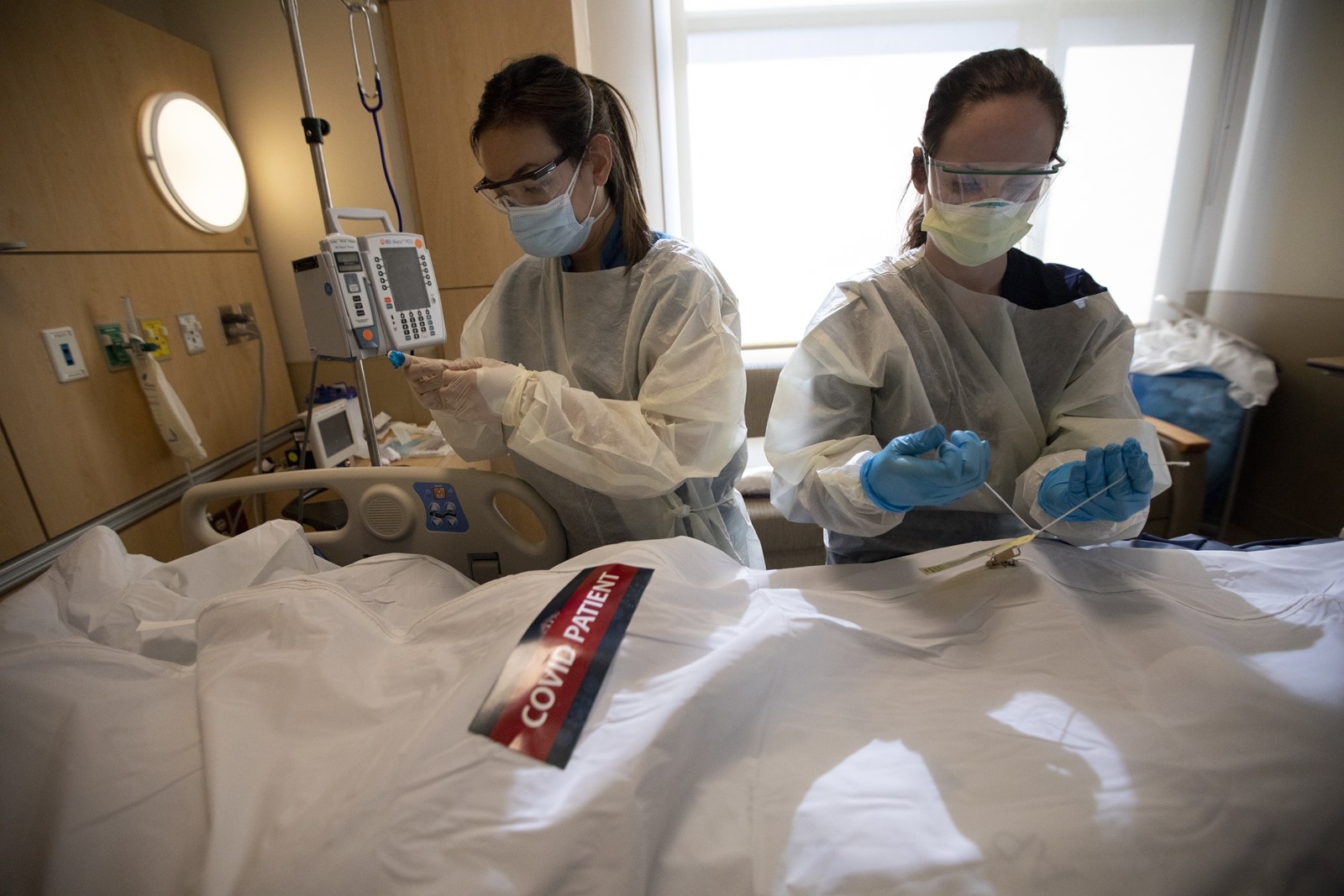 A months-long surge of coronavirus cases in Los Angeles County is reaching its grim if inevitable zenith as deaths reach once-unthinkable levels, medical infrastructure is buckling under a flood of patients and officials fear the mortality numbers will only worsen in the coming weeks.

The county recorded an average of 151 people dying from COVID-19 each day in the past week — a figure that’s almost as high as the average number of people dying daily from every other cause, about 170 a day. But more recently, those numbers have spiked considerably.

Single-day COVID-19 death records have been broken every day for the last three days of the year, with 242 deaths reported Tuesday, 262 on Wednesday and 291 on New Year’s Eve.

The sheer number of fatalities is causing more challenges to already overwhelmed hospitals and other institutions. Many hospital morgues are now filled with bodies, and officials are trying to move them for temporary storage at the county medical examiner-coroner’s office.

Mortuary and funeral home operators say they are having to turn away bereaved families because they don’t have the capacity to handle more bodies.

Jennifer Bagues, the general manager of Felipe Bagues Mortuary in Boyle Heights, started turning away families this week. Her family’s small mortuary on 1st Street, which was founded by her great-grandfather, can accommodate no more than 20 bodies.

Bagues estimates that 75% of the calls she’s fielded in the last two weeks have been from families whose relatives have died of COVID-19. Lately, she’s realized some families are returning to bury a second loved one. Bagues scheduled a service this weekend for a husband and wife who both died from COVID-19, the fifth one she’s arranged since the pandemic began, she said.

Telling grieving families she can’t take their loved ones is heartbreaking, Bagues said. “I think my dad would be turning over in his grave if he heard me saying that.”

Rob Karlin, the owner and funeral director of Los Angeles Funeral Service in Culver City, attributed his capacity issues both to the rising caseload and to a slowdown in the process of burying the dead. Obtaining death certificates, retrieving bodies from the coroner, embalming them — “everything is taking longer,” he said.

Embalmers, he added, are treating every body as if it had been infected with COVID-19.

“They’re taking extra precautions and using a lot of bleach,” he said. “There’s an uncertainty about how long it’s dangerous on a dead body. I don’t know. There’s so much unknown.”

At St. Francis Medical Center in Lynwood, morticians from funeral homes can’t come fast enough to remove bodies from the hospital morgue, said Scott Byington, a nurse at the hospital. Morticians visit the hospital multiple times a day to pick up as many bodies as they can, but limited space at the funeral homes has created a backlog. Any open spots are quickly filled with more deceased patients, Byington said.

At the beginning of a recent shift, Byington was told there were enough gurneys for nine more people in the hospital morgue. Six hours later, several patients had died and the morgue was at capacity, he said. “We were calling the mortuary to come and take what you can,” he said. “Our morgue has been full all the time.”

Based off of previous patterns, the spike in COVID-19 deaths related to Thanksgiving may last through early to mid-January. Hospitalizations related to the expected surge in virus transmission over Christmas and New Year’s are expected to worsen around the middle and later weeks of January.

In L.A. County, in the days before Christmas, overloaded hospitals were already adding in a net additional 234 more COVID-19 patients in hospitals every day over a weekly period, a record.

Lengthy wait times to offload patients at the county’s critically overcrowded hospitals are increasingly keeping ambulances from being able to respond to other emergency calls, officials said Thursday — the latest repercussion of the rampant and widespread coronavirus surge that’s walloping the region’s healthcare system.

Sometimes as many as 10 ambulances are queued up waiting to drop off patients, and “we’ve had patients waiting in ambulance bays outside of [emergency departments] for seven hours, eight hours,” said Cathy Chidester, director of the L.A. County Emergency Medical Services Agency.

“We’re running out of ambulances, and our responses to 911 calls are getting longer and longer,” she said during a briefing Thursday.

In the Antelope Valley, “response times are getting longer,” forcing officials to begin relying on ambulance companies that are not traditionally used to respond to 911 calls, Chidester said.

Hospitals are scrambling to find staff. Sometimes emergency medical technicians are asked to work in hospitals. Older hospitals are being reconfigured to house far more patients than they ever anticipated holding. The demand for oxygen for patients suffocating from their inflamed lungs is causing some hospitals to lose adequate air pressure in their pipes.

“Running low of oxygen and oxygen tanks is an issue,” Chidester said. The shortage of oxygen tanks is a problem for hospitals trying to discharge recovering COVID-19 patients as fast as possible, as they often need to be sent home with oxygen.

Unlike other disasters, where the impact can be easily seen from a dramatic fire or earthquake, the pandemic for some people appears to be hidden, with the illness and deaths “all happening behind the doors of households and hospitals, so … the general public is not really seeing what is going on,” Chidester said.

The number of deaths reported in California each day on Tuesday, Wednesday and Thursday was more than on any other previous day throughout the course of the entire pandemic — a back-to-back battering that has propelled the state’s total death toll past 25,000.

California is the third state to reach that morbid mark, joining Texas and New York.

Over the last four days, the deaths of more than 1,690 people statewide from COVID-19 have been reported, including a record-high of 442 Tuesday and the next-highest total, 424, a day later. The single-day record was broken again on New Year’s Eve, with at least 570 additional deaths, according to a preliminary tally.

Those numbers represent roughly the equivalent of one person dying from the disease statewide every three and a half minutes.

In Los Angeles County, officials say one person is dying every 10 minutes.

Starting at midnight Thursday, county officials began posting new messages on Twitter at that interval, describing someone who may have just lost his or her battle with COVID-19: the principal who stayed late to watch every school play, an ER nurse who pulled double shifts for months on end, the activist who labored to uplift a community, a cherished co-worker or friend, a beloved family member.

Each message was punctuated with the same plea: “Slow the spread. Save a life.”