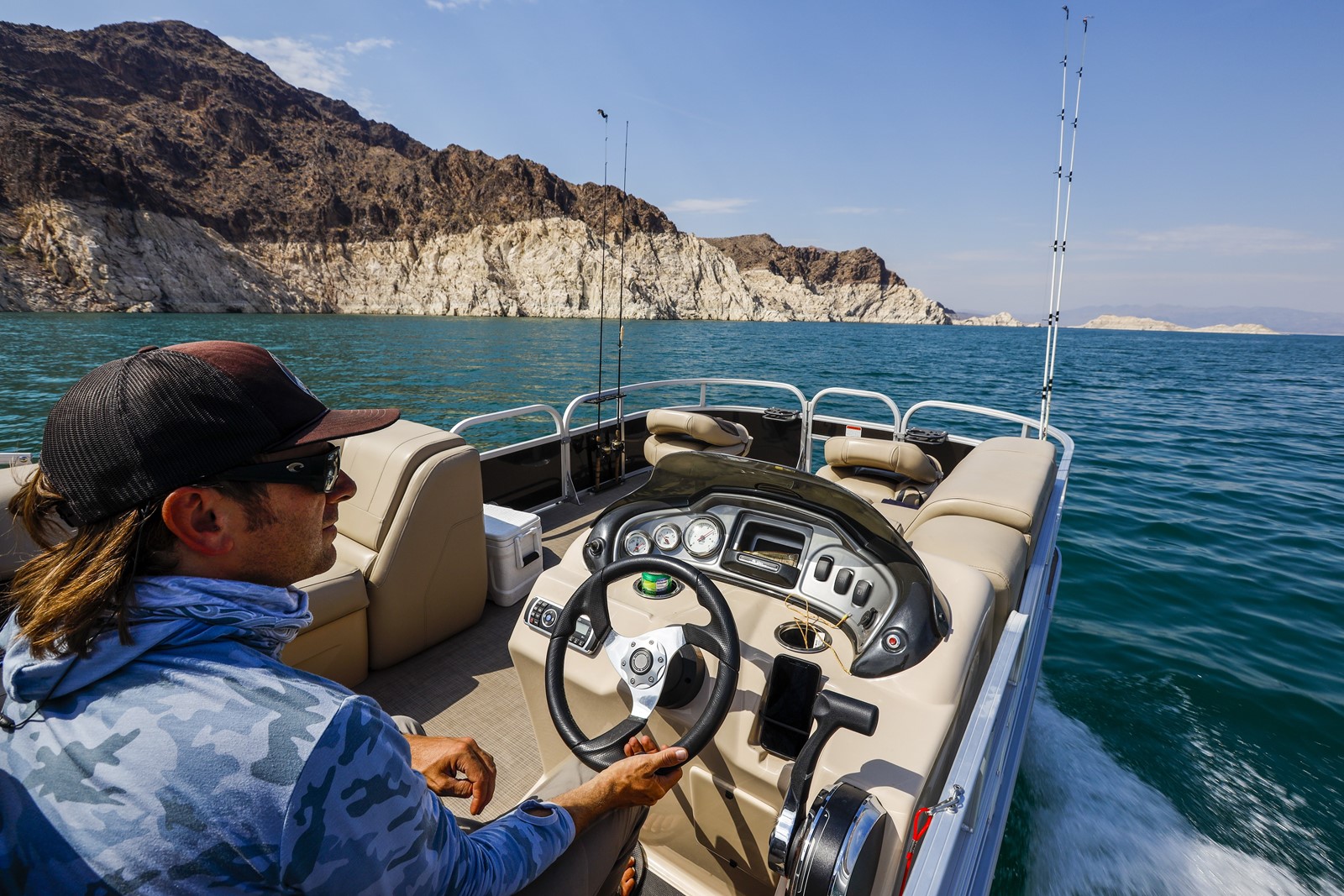 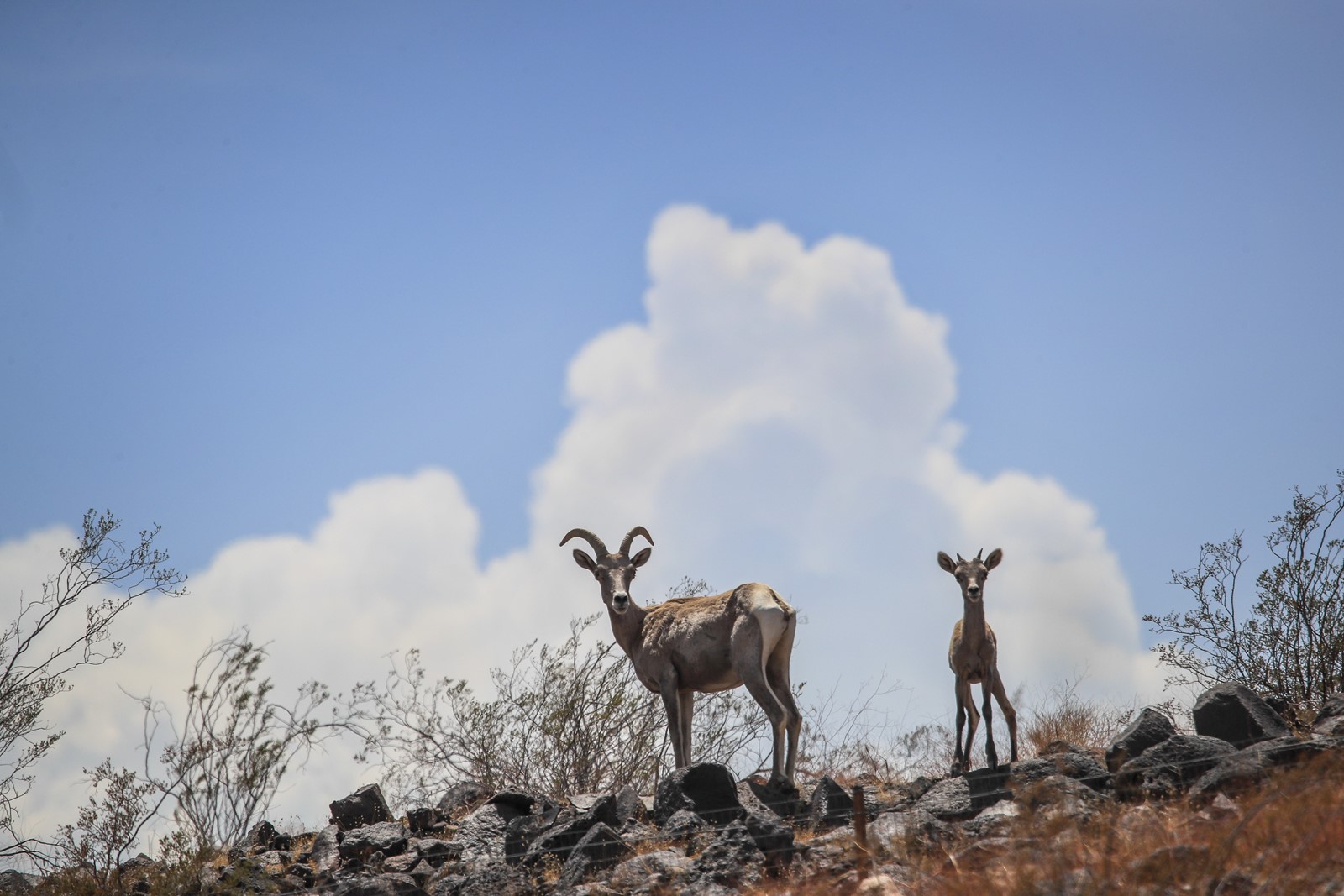 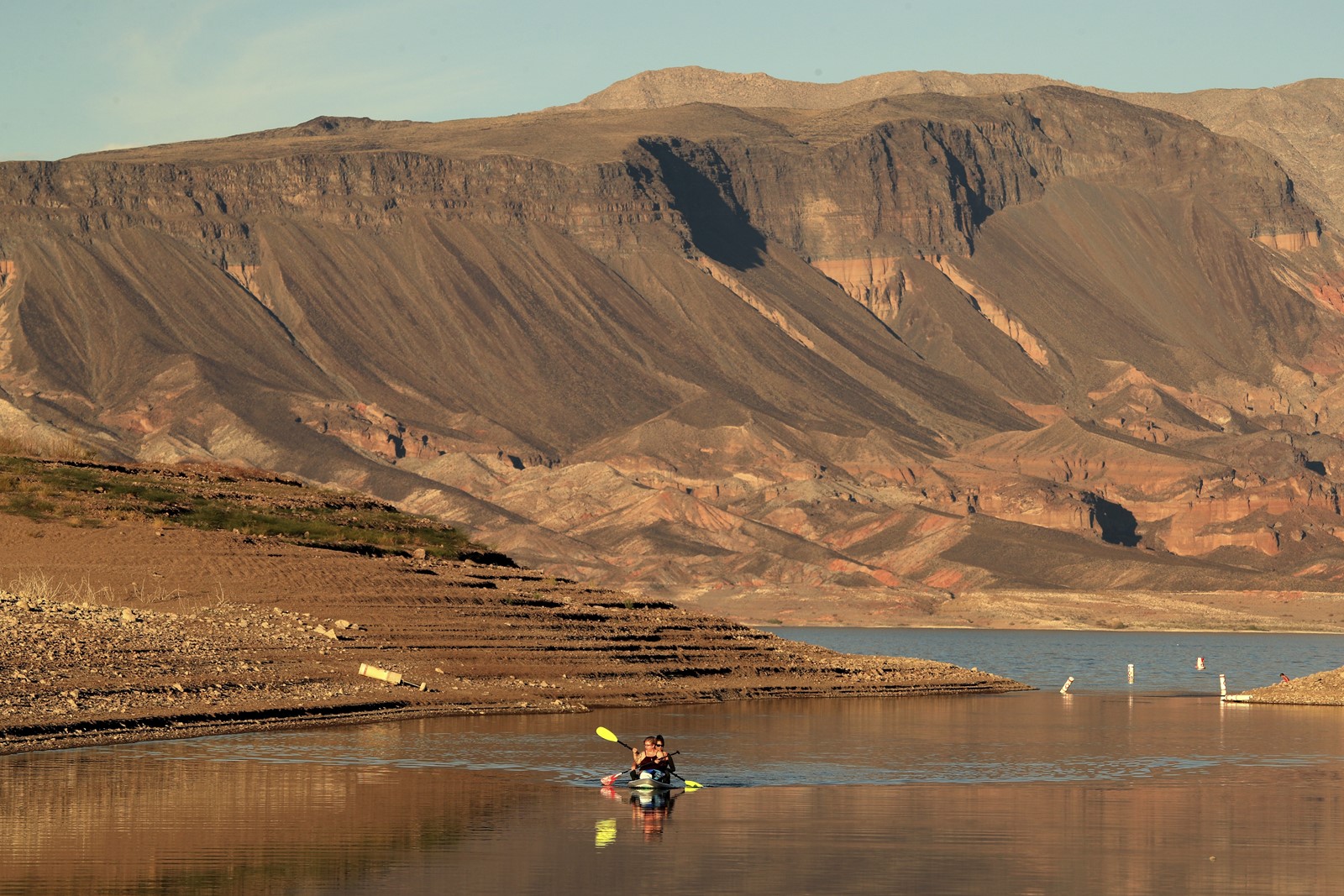 Eric Richins looked out from his pontoon boat to the shallows on the lake’s western edge. He squinted and paused as if he had come upon a foreign shore. For the first time in a career navigating the waters of the American West, he didn’t know where he was.

“I could have sworn I was here just six weeks ago catching smallmouth and bigmouth bass,” said the 35-year-old fisherman who runs tours on this 247-square-mile basin where the Colorado River meets the Hoover Dam to form the nation’s largest reservoir.

He pointed ahead to what looked like dozens of tiny steps made from successive layers of dried mud now covered in tall grass and weeds — the effect of rapidly creeping vegetation over a shoreline that has been dropping by nearly a foot a week.

“Now it looks like a lawn. I knew the drought was bad. I didn’t realize it was bad,” he said. “This place is unrecognizable.”

Lake Mead, a lifeline for 25 million people and millions of acres of farmland in California, Arizona, Nevada and Mexico, made history when it was engineered 85 years ago, capturing trillions of gallons of river water and ushering in the growth of the modern West.

But after years of an unrelenting drought that has quickly accelerated amid record temperatures and lower snowpack melt, the lake is set to mark another, more dire turning point. Next month, the federal government expects to declare its first-ever shortage on the lake, triggering cuts to water delivered to Arizona, Nevada and Mexico on Jan. 1.If the lake, currently at 1,068 feet, drops 28 more feet by next year, the spigot of water to California will start to tighten in 2023.

The crisis, said Eric Kuhn, former general manager of the Colorado River Conservation District, can no longer be ignored. “According to Merriam-Webster, a drought is a temporary condition,” he said. What is happening, he suggested, is something more permanent and troubling. “This is aridification.”

As fires sweep over large swaths of the West and scorching temperatures fry others, the scarcity of water is a less visible but perhaps the most pressing consequence of climate change confronting the states that depend on Lake Mead.

First to be hit are locals along the Nevada-Arizona border near Las Vegas, who rely on the lake for tourism, fishing and recreation. Ramps are closed. Jammed boats are towed from newly shallow waters. Fishermen scour to figure out where to catch striped bass. The iconic lake’s predicament is marked by a “bathtub ring” of calcium deposits that highlight the rocky edge where water once flowed.

For Richins, who lives in Kingman, Ariz., and launched his company, Big Water Boating, two years ago to offer daylong fishing tours, the drought has meant thinking of changing his offerings entirely.

“The places where I was catching fish last spring and summer just don’t have fish anymore,” said Richins, a former wildlife biology professor at Salish Kootenai College in Montana, who used to regularly tow his 20-foot boat with his pickup truck for the hourlong drive to Lake Mead.

“As the water drops, the habitat for fish changes because some of their homes are just no longer available.”

On a recent morning, Richins pulled up at dawn to Temple Bar Marina — about 80 miles from Las Vegas and a popular point for boaters from Arizona to float onto the water. A sign read, “Danger: Launch at your own risk. Low water levels.” He stood 100 feet from the lake’s edge, looking below him at a ramp made of concrete planks that transitioned into pipe mats leading into the basin. But the water was not where it once was.

“I was fishing right here last spring,” Richins said, staring in disbelief at the moss, mud and dead cattails that remained where he used to launch his boat. He waded into the water, feeling the mud with his feet and measuring the drop-off from the ramp.

The mud was too soft. The water too shallow. The drop too big. The boat had no chance.

It was as if nature were playing tricks on him. Richins drove an hour west to Hemenway Harbor, a launch point in Nevada that has become the site of hours-long traffic jams as one of the few ramps to remain open most days. When he arrived, a maintenance worker told him that it shut down that morning. The lake had receded again. The ramp needed repairs.

He drove 40 minutes more up and around the lake back east to the ramp at Callville Bay. He got the boat in the water four hours after his first attempt.

“It’s more gas. It’s more time. It’s more money to get up here,” said Richins. “People ask a lot about tours on Lake Mead because it’s so famous. But I might have to go elsewhere for now, like Lake Mohave,” a 67-mile-long reservoir formed downriver by Davis Dam on the Nevada-Arizona border that’s closer to Kingman.

Elsewhere around Lake Mead, some business owners and recreational boaters have already adjusted to the new normal.

At Laker Plaza, a boat storage and supplies stop in Henderson, Nev., near the entrance to Lake Mead National Recreation Area, the Las Vegas Water Rentals and Bait and Tackle shop has taken to advertising to shoreline fishers and tourists who don’t need big boats. The store, a one-stop-shop for tackle, lures, dry ice and snacks, is bracing for fewer boating customers after low water levels forced the Nevada Bass Anglers club to cancel its monthly July tournament.

“We’re hoping there’s a silver lining with people who don’t get out on motorized boats and maybe kayak instead because you can launch a kayak anywhere,” said the store’s co-owner, Tommy Middleton.

“We feel the economic impact everywhere. Fewer boaters pulling up to fill their gas. People who have their boats stored at marinas might not want to pay fees if they can’t use their boats. The chain effect goes on.”

Middleton said his problems were small compared with the bigger issues at hand.

“It’s fun to go paddle-boarding and kayaking, sure,” said Middleton, 42. “But anything that feeds off the Colorado River is down. That’s bad news because the waterway is here to support us and sustain us.”

Lake Mead and the Colorado River are created from melted snow that flows into La Poudre Pass in the Rocky Mountains. Western states including Wyoming, Colorado, New Mexico, Utah, Nevada, Arizona and Nevada — as well as 29 tribes and Mexico — depend on the water from the river. Each has signed successive treaties stating how much they receive from the river and dams, with the current agreements expiring in 2025.

Concerns over Lake Mead’s water levels came as negotiators met in Denver last month to take a preliminary step toward a four-year process to update operating rules and allocations for the reservoirs along the river.

According to the U.S. Bureau of Land Reclamation, which manages the river system, drought in Lake Mead is far from an emergency. Yet, the water level is nowhere near what it was a year ago. Having dropped 1.4 million acre-feet from April 2020 to April 2021 and 886,000 acre-feet since then, Lake Mead’s losses show no sign of slowing down.

“We are concerned, but it isn’t a crisis,” said bureau spokeswoman Patti Aaron. “People have been planning for this moment for a long time and have the mechanisms in place to protect the water levels at Lake Mead.”

But to many experts, it’s a make-or-break moment in the history of a river that has been for decades over-allocated, with less water available than is needed. What’s at stake for Lake Mead is a recreation area that draws more than 8 million visitors a year and generates $336 million annually.

While computer modeling helps water managers anticipate future shortages that could affect water supplyand tourism, there is a gap in the understanding, said Kuhn, the former head of the Colorado River Conservation District. Predicting increased temperatures is easy — over the last century the West has heated up by nearly 2 degrees — but understanding how high temperature affects precipitation is less certain.

The monsoon rains that typically hit the Southwest during the summer never materialized last year. In Colorado, drier soil from higher-than-typical temperatures and lower air moisture has led to less melted snow draining into rivers and streams. As a result of the drought in Northern California, Los Angeles’ Metropolitan Water District is building up its reserves with water taken from the Colorado River, which will continue to flow uninterrupted through 2022.

But what comes next?

The Bureau of Reclamation estimates that normal snowfall in the Rockies and the Upper Basin this winter will reverse the present drought. By the end of September 2022, the agency expects the river to bring 8.3 million acre-feet of water into Lake Powell, the reservoir on the Utah-Arizona border that precedes Lake Mead.

The projection, based on soil moisture, temperatures and precipitation, is updated monthly, but currently goes against the trends of the last two years. From October 2019 to September 2020, Lake Powell received 5.8 million acre-feet, and since has received 3.2 million acre-feet.

Experts suggest that the agency’s forecasts for next year are too generous: “The Colorado River is over-allocated. We really can’t rely on snowpack in the Rockies to refill our reservoirs and mitigate the over-allocation of the river,” said Kathryn Sorensen, former director of water services in Phoenix and now with Arizona State University.

The Bureau of Reclamation’s optimistic forecast for Lake Powell means the agency can replenish that reservoir. But it will continue to release water from Lake Mead and predicts its elevation will fall to 1,050 feet by September 2022, five feet shy of the level where Southern California must relinquish some of its allocation of water. Further analysis by the agency gives the reservoir a 58% chance of dropping to 1,025 feet and a 21% chance of hitting 1,000 feet by 2025.

“To me it is a shocking number,” Sorensen said. “It is one of those events that is of small probability but high consequence.”

For Richins, who grew up exploring the Idaho trails along the Snake River and was a U.S. Forest Service river ranger in Montana before launching fishing tours on Lake Mead, the idea is unfathomable.

“Rivers are my life,” he said recently as he navigated the Las Vegas Bay, an eastern portion of the lake where towers of the Vegas Strip are visible on a clear night. Mt. Charleston, the highest peak in the region, jutted out to the sky beyond the city, with the red, rocky bluffs of the Mojave Desert visible much closer. Heron, grebe and pelicans swam in front of him.

Weeks earlier, he had been in this same spot, spotting boils of striped bass — feeding frenzies made up of dozens of fish gathered near the surface.

That was a good day. The water was higher, the terrain more familiar, the catch plenty. He hauled a dozen striped bass, some up to 5 pounds, back ashore. Boats were usually plenty in this part of the lake.

But today, his was the only one within sight. He blamed the winds that were kicking up and the searing summer sun as morning turned to afternoon. But Richins sensed something else was going on too. Maybe fewer boats were out because of the ramp closures and long lines at the ones still open. For those who wanted to fish, he wondered if they — like him — were perplexed at where to go as the water shifted.

“That empty lake feeling,” Richins called it, as if in mourning. It wouldn’t deter him from what he loved. He’d go out on the lake again, seeking the thrill of the catch. He hoped Lake Mead wouldn’t change again too much more. But he wasn’t confident.

His boat pressed on through the shallows and toward the muck and mud of the expanding shore.