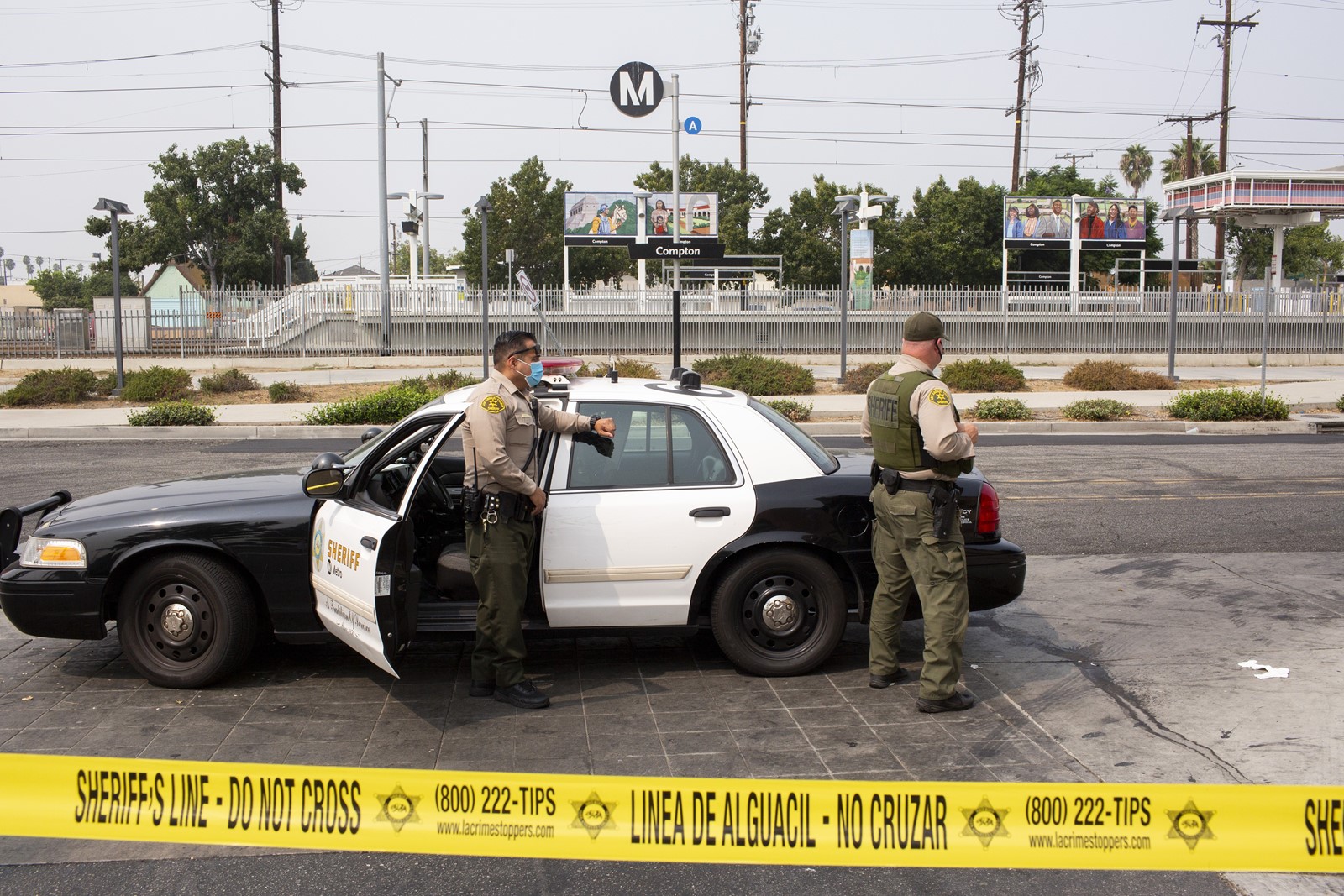 DEPUTIES MONITOR the area near the Metro Blue Line station in Compton. Authorities didn’t give a motive for Saturday’s gun attack on the two deputies, one a 31-year-old mother and the other a 24-year-old man. (Gabriella Angotti-Jones Los Angeles Times) 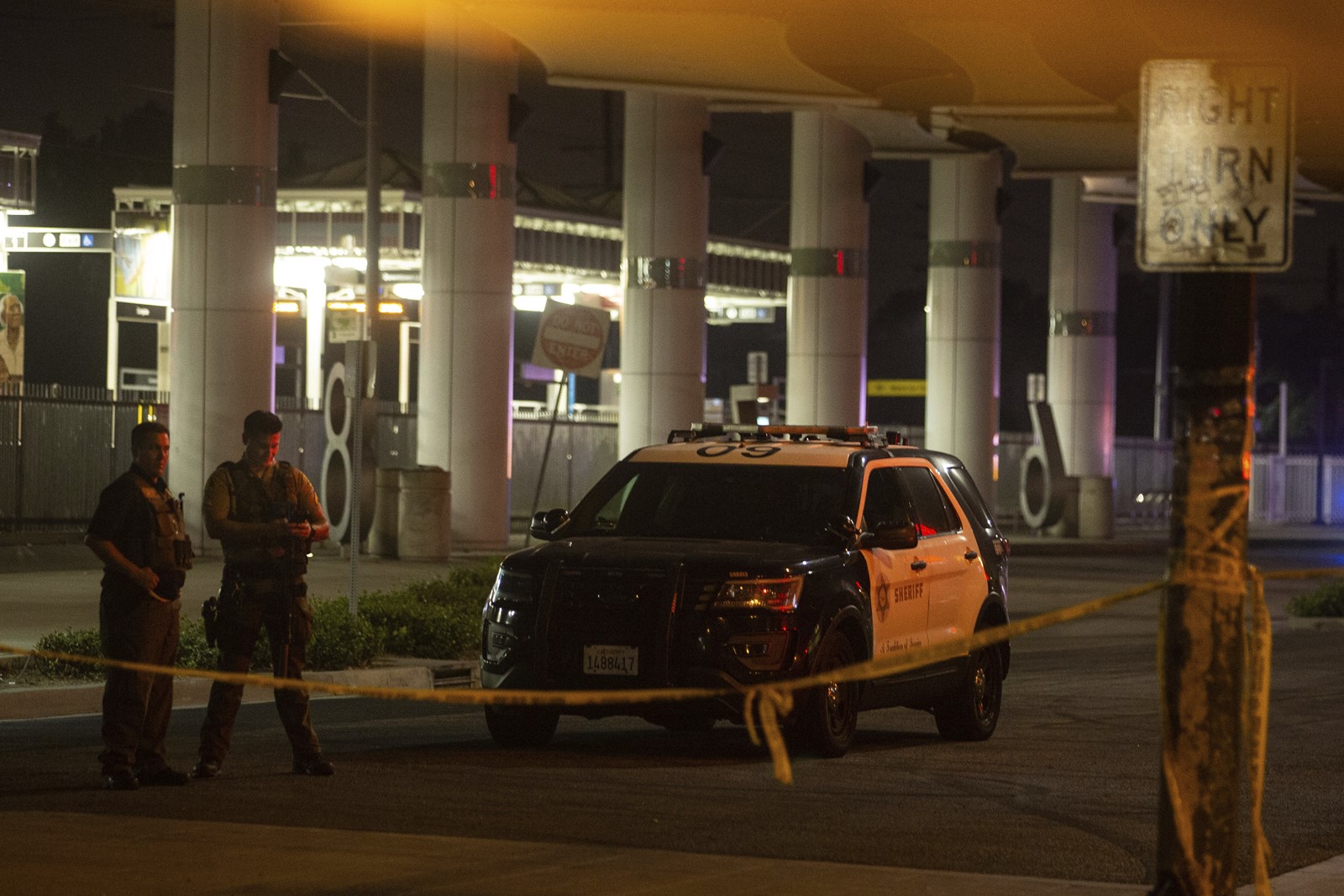 STREETS ARE blocked off near the shooting. As detectives furiously work to identify the shooter, Compton residents are struggling to understand the violence, noting tensions between police and the community. (Jason Armond Los Angeles Times)
PREVIOUS IMAGE

Two Los Angeles County sheriff’s deputies shot in what authorities described as an ambush attack are expected to survive amid an intense manhunt for the gunman captured on video firing inside their patrol car and as the violence became a new flashpoint in the political debate about policing and crime.

Both deputies were shot in the head near the Compton Metro station but went through surgery and are now listed in stable condition. The attack sparked widespread outrage, from the presidential campaign to the streets of Compton, where residents fear it will heighten already deep tensions between police and the community after several high-profile deputy shootings and uses of force.

“It makes no sense,” said Setif Capelton, 22, who has lived in Compton nearly all his life and heard the burst of gunfire Saturday night. “It hurts this community more than anything else. Now, what if someone walks up to a police officer’s car, and they get scared and shoot that person?”

Authorities have offered no motive for the attack. But new surveillance video and dispatch calls provide a more detailed account of what happened.

The video reviewed by the Los Angeles Times shows a figure in dark clothes casually walk up a pathway near the Compton Blue Line station, approaching the deputies’ parked patrol car from behind.

The person draws closer and turns to face the passenger’s-side door, his steps quickening. Inches from the window, he raises a gun, opens fire and runs back the way he came.

Moments later, the passenger door opens and a deputy stumbles out, hand on head. The driver’s-side door opens soon after. On the radio, a shaky voice mutters: “998 Compton Pax.”

Recognizing the code for a deputy-involved shooting, a dispatcher asks: “Just happened?”

In the security footage obtained by The Times — an extended version of the clip released by the Sheriff’s Department — the shooter turns a corner out of the frame, past a second figure lingering on the sidewalk. It’s unclear if the second person was involved in the attack. A Sheriff’s Department spokesman declined to comment, citing the “ongoing active investigation.”

Capt. Kent Wegener said the security footage released by the department was recorded with a fisheye lens, so the height and weight of the assailant were distorted.

County Supervisor Kathryn Barger on Sunday recommended offering a $100,000 reward for information leading to capture of the shooter. The Board of Supervisors will vote Tuesday on whether to approve the request.

Sheriff Alex Villanueva said Sunday that the deputies “survived the shooting and [are] recovering, a double miracle.” They were being treated at St. Francis Medical Center in Lynwood.

One of them is a 31-year-old mother of a 6-year-old boy and the other a 24-year-old man, Villanueva said. He said both deputies were sworn into office just 14 months ago in the same academy class.

“These are real people doing a tough job,” Villanueva said, “and it just shows just the dangers of the job, in the blink of an eye.”

Villanueva said in a brief interview that detectives had been “working furiously overnight” to identify the shooter. Detectives are scouring the area for more surveillance video that may offer a better view of the shooter, he said.

He said the shooting evoked the 2014 attack in Brooklyn in which a man fatally shot two New York police officers.

“There is no rhyme or reason to it; it is an act of a coward,” Villanueva said. “Obviously tensions were running high in the neighborhood with the deputy-involved shooting. But there is no nexus to it at this time. We are chasing all leads.”

Residents in Compton also said they were struggling to understand the violence.

Juan Ceja was managing Superior Grocers on Saturday night, unloading groceries, when he heard screaming and sirens. He rushed to the front of the store, worried there was an active shooter, and learned of the shooting. The store was busy with customers, but Ceja decided to close the store early, at 8:30 pm.

A few blocks away, Maria Medina, who has lived in the area for 20 years, heard the gunfire, which is not uncommon in her neighborhood, she said.

“It feels like there’s more tension between the police and people in the area,” Medina, 66, said in Spanish, with her dog Fluffy at her side.

She’s noticed a heightened police presence in the area recently. It makes her feel safe, but she also thinks that law enforcement is more aggressive with the predominantly Black and Latino residents who live there than with white people.

Though the two deputies survived the shooting, she said, “no one deserves to have their life taken like that.”

The shooting comes amid heightened tensions between the Sheriff’s Department and the community after a string of controversial killings by deputies that have sparked months of protests.

On Thursday, detectives from the Operation Safe Streets Bureau shot and killed a man who they said opened fire on them as they served a search warrant in Compton, according to the Sheriff’s Department.

Saturday’s shooting immediately entered the presidential race. President Trump tweeted his outrage at the attack, adding that if the deputies die, “fast trial death penalty for the killer. Only way to stop this!”

The president has been widely criticized for his handling of tensions and unrest sparked by the police killing of George Floyd, at times seeming to stoke the fires of racial bias as part of his reelection bid.

Trump has blamed protesters for instigating violence and acts of vandalism in big cities.

“This cold-blooded shooting is unconscionable and the perpetrator must be brought to justice,” he said on Twitter. “Violence of any kind is wrong; those who commit it should be caught and punished. Jill and I are keeping the deputies and their loved ones in our hearts and praying for a full recovery.”

The Sheriff’s Department has been under scrutiny for several deputy-involved shootings in recent months. The killing of Dijon Kizzee, 29, who was stopped while riding a bicycle in Westmont last month, has sparked days of tense protests.

Some demonstrators came to St. Francis Medical Center, where the wounded deputies were being treated. The department said on Twitter that some of those protesters had blocked entrances and exits at the hospital, but that could not be independently verified.

Videos from the scene capture at least one person in the crowd yelling, “I hope they ... die.”

A reporter for KPCC and LAist was arrested there. Video showed the reporter, Josie Huang, pinned by several deputies.

Huang received a citation for allegedly obstructing a peace officer.

Back in Compton, Capelton said tensions in the area had reached “a boiling point.”

Omar Williams, who lives near the Metro station on Willowbrook Avenue, said he was saddened if not surprised to learn someone had shot a police officer, an act he called “the work of an evil person.”

Williams, 40, had taken part in protests against racism and police brutality earlier in the summer, but he’d recently sensed in the crowds a heightened anger.

“You could hear the chatter in the crowd,” he said. “You could feel the tension. You could tell something was going to happen.”

He believes the police have at times abused their authority and subjected Black people in Compton and elsewhere to “years of hostility.” Those abuses shouldn’t be forgotten, he said.

“But I’ve got to remember this,” he said, standing across the street from where the two deputies were shot, “as much as I remember the killing of an unarmed Black person by the police.”