Are Saudi ties so valuable?

Trump stresses economic importance to the U.S., but doubts remain 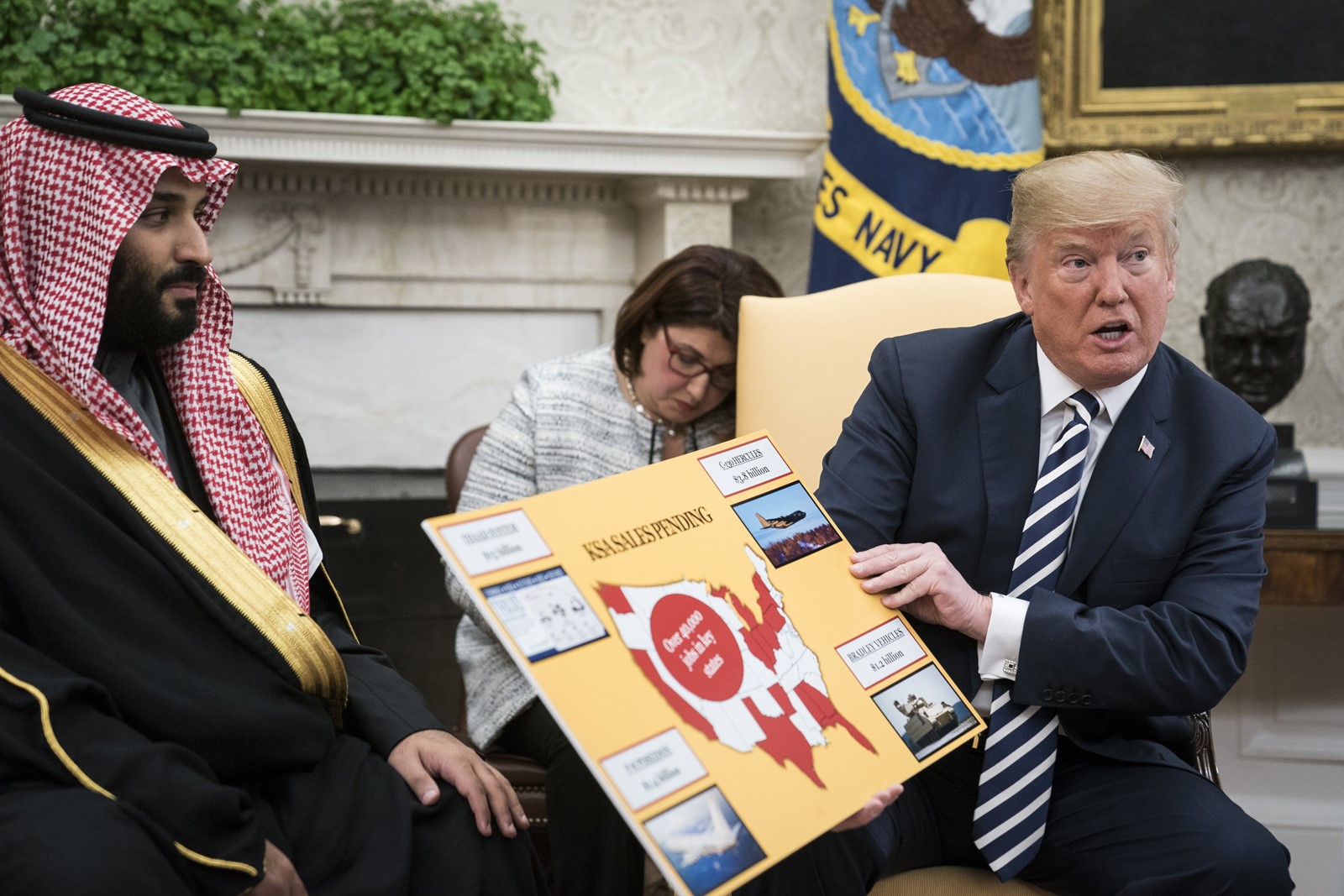 As President Trump has faced increasing pressure to punish Saudi Arabia over its suspected torture and murder of Saudi journalist Jamal Khashoggi, he has repeatedly cited the country’s value as not only an ally, but also a customer.

Trump’s open talk of sales figures as a factor that could outweigh human rights concerns is a rare stance for an American president, one that conflicts with long-standing national values. Compounding the controversy, the president’s figures are significantly inflated, speculative and further in doubt owing to international revulsion at the Saudis over Khashoggi, according to defense experts and current and prior reviews by The Times.

“To go around and throw a number like that around is really highly misleading, and that’s being generous,” said Richard F. Grimmett, who spent three decades compiling the most authoritative accounting of U.S. military arms sales for the Congressional Research Service before retiring in 2012.

The military sales figures are murky because it takes years to negotiate, approve and build weapons systems for sale to another country. So far, contracting experts and government officials estimate that the Trump administration has agreed to somewhere between about $15 billion to $22 billion in sales to Saudi Arabia, much of which was negotiated during the Obama and George W. Bush administrations.

“It’s showmanship in lot of ways. This $100-billion deal over many years is still much yet to be negotiated, and much of it may never happen,” said Jeff Abramson, a fellow at the nonpartisan Arms Control Assn.

The president’s promise to boost the U.S. economy through Saudi purchases dates to his sumptuously feted visit to the kingdom 17 months ago. As his first international trip as president, Trump’s tour was a powerful symbol of his intent to reorient American foreign policy in the Middle East and the world.

As Trump was being celebrated by the Saudi royals — led by King Salman and Crown Prince Mohammed bin Salman, the latter of whom is now the nation’s de facto ruler and widely blamed in Khashoggi’s death — the administration announced a $110-billion arms deal and a series of commercial deals that it said would lead to a combined total of “upwards of more than $350 billion” in investment in the United States. The Saudi government valued the package at “in excess of $380 billion.”

Trump administration officials could not say where the president came up with the number he used last week, a total of $560 billion. Nor could they provide a list of itemized investment projects.

From the beginning observers raised questions about the commercial aspects of the deal. When the announcement was made in 2017, administration officials allowed a Times reporter to view a list of 23 projects that were the basis for the president’s investment and jobs claims. The two-page list contained broad ranges of dollar figures, however, and an important caution at the top: “Economic Impact figures are supplied by Saudi sources and are not verified.”

A deeper look at the list underscores why American officials were reluctant to take it at face value, at least behind the scenes.

The biggest project, a $100-billion investment fund backed by the Japanese telecom giant SoftBank, is based far from the United States, on the British island of Jersey. The so-called Vision Fund is expected to benefit American companies and workers. Yet it also has operations in London and Tokyo and plans to invest in technology companies around the world.

An official familiar with the fund’s plans told The Times last year that it viewed the United States as an attractive market but that the firm had no single geographic focus.

Courtesy of a pledge by the crown prince, the Saudi contribution is supposed to be $45 billion — not the full $100 billion listed by the Saudis as its economic impact. Yet even that lesser amount is now in jeopardy.

SoftBank’s chief operating officer, Marcelo Claure, said at a technology conference in Silicon Valley last week that the company is “anxiously looking at what is happening” in the kingdom after Khashoggi’s disappearance, according to the Financial Times. Claure said “there is no certainty” that the tech company will launch phase two of the Vision Fund.

The commercial fallout over Khashoggi’s disappearance could yet run wider. Treasury Secretary Steven T. Mnuchin announced Thursday that he, too, would skip this week’s Saudi-sponsored “Davos in the Desert,” an international business and media conference in Riyadh, joining numerous other foreign officials and corporate leaders in the shunning of the event.

Stephen Schwarzman, chief executive of the Blackstone Group, the asset management firm, also pulled out of the conference. Blackstone is the second-largest business partner with the Saudi government on the list, with plans to create an infrastructure fund seeded with $20 billion from Saudi Arabia’s Private Investment Fund.

Trump’s hoped-for military sales to the Saudis face trouble closer to home: Members of Congress, who have the power to block future arms sales, are expressing bipartisan anger with Saudi Arabia for its human rights record, including deaths of civilians in Yemen from Saudi bombings.

A State Department official, who was not authorized to speak on the record, said the United States has so far signed letters of acceptance for $14.5 billion in weapons systems since Trump’s $110-billion announcement last year. The signed agreements are for helicopters, tanks, ships and other weapons and training; most date to the two prior administrations.

Other defense analysts, using different measures, put the numbers closer to $22 billion. The biggest project by this reckoning, a missile defense system known as the Terminal High Altitude Area Defense, would cost about $15 billion. Because a final agreement hasn’t been reached, it is not included in the State Department figure.

The American relationship with Saudi Arabia has had a strong financial component from the start, under President Franklin D. Roosevelt, based on the desert kingdom’s oil riches. The country became a bigger arms client in the late 1970s, after the Camp David accords by which President Carter brokered peace between Israel and Egypt.

By such sales, the United States wanted to assure the Saudis that they would not be left defenseless against a more powerful Israel, which got heavily subsidized American arms, said Gordon Adams, a professor emeritus at American University’s School of International Service who specializes in defense contracting. Saudi arms sales rose under President Obama when he sought unsuccessfully to placate the kingdom as the administration brokered a multinational deal with Iran, the Saudis’ enemy, to freeze that country’s nuclear program.

Under Trump, the United States has grown much closer with Saudi Arabia, as he abandoned the Iran deal while speaking more openly about his transactional desire to wield American power for the sake of U.S. business.

But the horrific accusations from Turkey that Saudi officials tortured, killed and dismembered Khashoggi, a U.S. resident who wrote columns for the Washington Post, have complicated that thinking and put pressure on both Trump and Prince Mohammed.

“In taking sides, the Trump administration is now dancing with the devil,” Adams said. “Saudis are their allies, Saudis are their friends. And this Khashoggi thing is very uncomfortable.”

Trump is “more concerned about the press effect on the relationship and how to manage that” than he is on the relationship itself, said a member of the foreign policy community with ties to White House, speaking on condition of anonymity. “We’re not going to give up on the Saudis.”