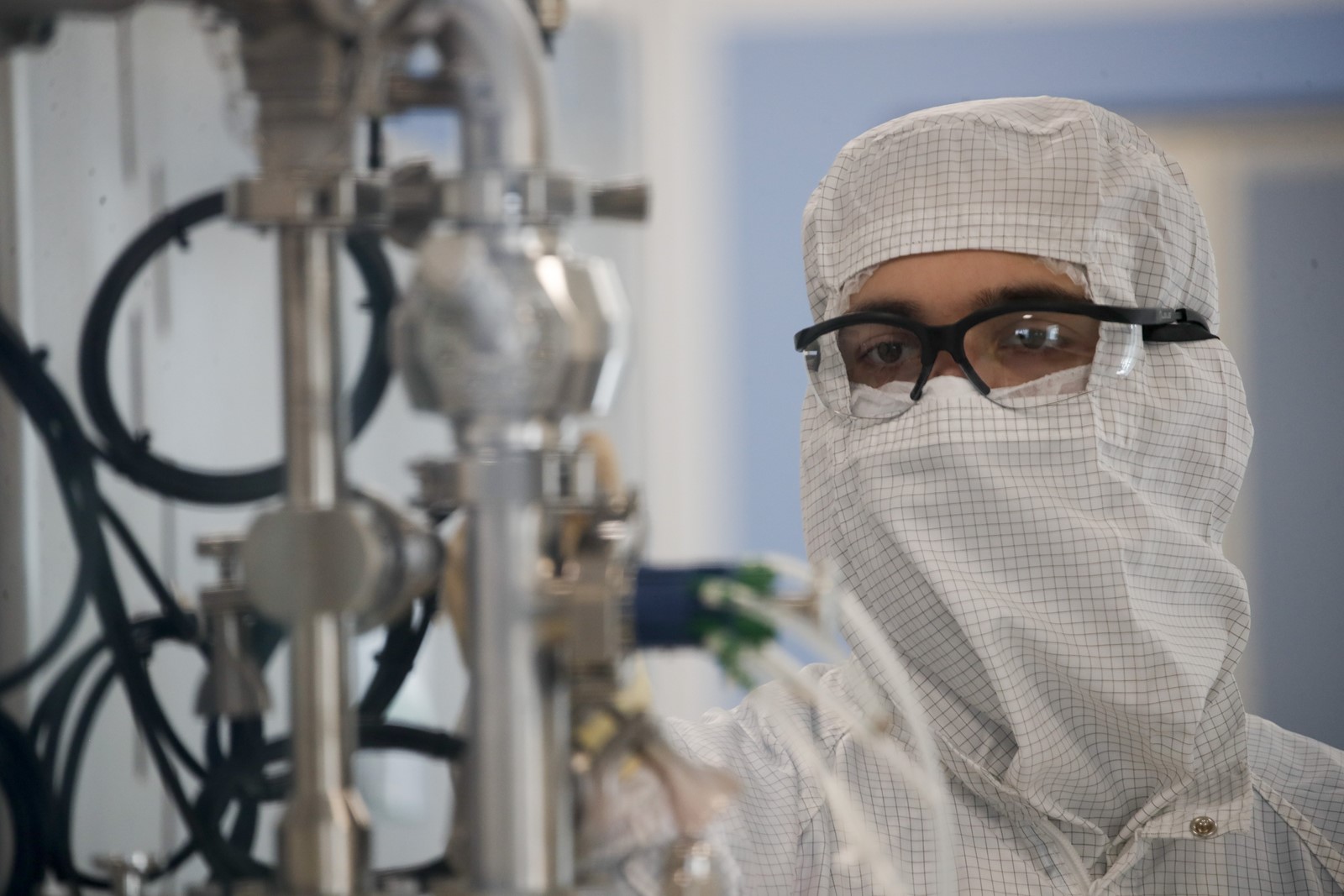 “ANTI-VACCINATION sentiment is going into the mainstream,” a health expert says. Above, a worker at MAbxience, a company in Argentina that will make an experimental coronavirus vaccine for Latin America. (Natacha Pisarenko Associated Press)
PREVIOUS IMAGE

Greer McVay insists she is “not an anti-vaxxer — not at all.” She is up to date with her own immunizations and had her son vaccinated when he was a child. But she fears the development of a vaccine for the coronavirus is being dangerously rushed, in part to improve President Trump’s prospects ahead of the presidential election in November.

“This situation is different, because of the politics that have been injected into the process and the speed at which they’re developing the vaccines,” says McVay, a communications consultant from California and a supporter of the Democratic Party. “Frankly, I don’t trust this president. It just gives me pause.”

McVay, 53, is one of a growing number of “vaccine hesitant” Americans who have not previously identified with the anti-vaccine movement, which has traditionally been dominated by libertarian Republicans and those on the left who preach the benefits of alternative medicine over pharmaceuticals.

“I don’t fall into either category,” she says.

Rather, McVay fears that Trump will put pressure on the U.S. Food and Drug Administration to quickly approve a vaccine before the election.

She cites as evidence the FDA’s decision to allow the use of hydroxychloroquine — a disproved drug touted by the president — to treat the virus before the agency performed a U-turn after several studies showed the medicine did not benefit patients.

She is also mistrustful of Operation Warp Speed, a sprawling federally funded effort that has paid billions of dollars to drug companies — including $1.2 billion to AstraZeneca and $1.6 billion to Novavax — to manufacture hundreds of millions of doses of their vaccine “at risk,” or without full clinical trials in advance of definitive data.

“The way that they are expediting the process is by doing things concurrently,” she says. “They’re beginning manufacturing before they’ve even completed the trial.”

The discovery of a vaccine before the election might well boost Trump’s chances by allowing him to claim he has turned the tide against a disease that has killed more than 180,000 Americans. But public health experts fear it could also lead to a hardening of anti-vaccination sentiment among people like McVay ahead of what will be one of the largest mass immunization programs in recent U.S. history.

Two vaccines have already been approved — one in Russia and a second in China — while eight are in the final stage of clinical testing.

“Anti-vaccination sentiment is going into the mainstream,” says Heidi Larson, director of the Vaccine Confidence Project at the London School of Hygiene and Tropical Medicine. “A lot of people you never would have imagined are now saying that maybe the anti-vaccination lobby has a point.”

Harvey Fineberg, the chair of a committee on the coronavirus set up by the National Academies of Sciences, Engineering and Medicine, says: “I am concerned about people resisting immunization for irrational reasons based on generic distrust of anything the president says.”

Polls show that as the pandemic has continued, U.S. citizens have become less confident about the safety of a vaccine.

Polling by YouGov in May found that around 55% of U.S. adults said they would get a COVID-19 vaccine. By the end of July, that figure had dropped to 41% — well below the 60% to 70% public health experts think will be needed to achieve “herd immunity.”

Joe Biden, Trump’s Democratic opponent, has seized on the surveys as proof that the president is fueling vaccine skepticism. “It’s not the usual anti-vaccine crowd — it’s beyond that — because people are losing faith in what the president says,” he said last month.

However, there is also substantial opposition to vaccines in other high-income countries that are likely to be more skeptical about the safety of immunizations, according to a recent study by the Wellcome Trust, a British research charity.

In France, fewer than half of people believe vaccines are safe, the report found. In Ukraine — the most skeptical country in the world — the figure is just 29%.

People who worry about vaccines fall broadly into two camps: those who are outright opposed to them, and a far bigger number who are unsure that they are safe. Academics term the latter group “vaccine hesitant.”

Concerns about vaccinations vary from country to country, but they are often held by people not normally associated with fringe views or conspiracy theories. Many are highly educated, and they are just as likely to be liberal as conservative. “If you want to map where the anti-vaccination movement is strongest, just look for your nearest Whole Foods,” says Barry Bloom, a professor of public health at Harvard University, referring to the high-end supermarket chain.

Those who study the phenomenon say they have begun to find anti-vaccination material being shared among a far wider group of people since the outbreak of the pandemic.

“My researchers have found Facebook groups which have nothing to do with vaccinations suddenly widely sharing misinformation about them,” Larson says. “There is a lot of anger and emotion in the world right now, and the debate around vaccines has been an opportunity for that to bubble up.”

One example of this is how supporters of QAnon, a pro-Trump network of conspiracy theorists, are increasingly sharing anti-vaccination material. High-profile members have been promoting the false theory that the coronavirus was deliberately developed and spread by Bill Gates, the Microsoft co-founder and pro-vaccination health activist.

Much of the doubt stems from the breakneck speed at which coronavirus vaccines are being developed. The previous record for developing a vaccine is four years for mumps, and that was more than five decades ago. If one is proved to be successful in October, it will have taken just nine months.

Even some pharmaceutical executives, like Ken Frazier, chief executive of Merck, have warned of the dangers of moving too quickly.

Anti-vaxxers have also seized on the fact that some developers are using a relatively new technology called messenger RNA that attempts to alter the body’s protein-making machinery.

In late June, Carrie Madej, a long-term anti-vaxxer physician from Georgia, released a video on YouTube that has been viewed more than 409,000 times, in which she mixed truths about mRNA vaccines — such as the fact that they are being studied in humans without having been first tested in animals — with outlandish theories.

The doctor warns that vaccines and “ancillary products” like health apps could be used to “create a new species” that could be hooked up to “an artificial intelligence interface.” The video ends with a tearful plea from Madej to her viewers to “start flooding social media with this.”

Madej is right about one thing: The battle to shape public opinion on vaccines will be won or lost online, said Neil Johnson, a professor of physics at George Washington University.

Johnson recently published a paper in the scientific journal Nature concluding that the anti-vaccination movement was winning the online information war because it was organized around smaller “clusters” that were able to infiltrate groups of undecided people. He says the movement has its roots in the anti-vaccination sentiment toward measles jabs that has surfaced in recent years, and that has been blamed for a spate of outbreaks.

“Since 2019, the [anti-vaccination] communities have grown enormously and it’s almost like the whole thing is in some sort of overdrive, it’s kind of on steroids,” he says. “It’s the parenting groups, the school parents’ associations — people who would never usually talk about vaccines, but now they are absolutely engaged.”

Administrators of the online groups are focused on the news surrounding vaccines and quick to seize on developments that can be used to support their stance. This month, anti-vaxxer Facebook groups lighted up with the news that AstraZeneca had secured protection from liability claims related to its vaccines; the administrators presented it as proof that the drugmaker knows the jab will cause serious side effects and is trying to indemnify itself.

Anti-vaccination groups also have a proliferation of different messages that appeal to different people, says Johnson, including safety fears; doubts over whether COVID-19 really poses a risk, especially to young people and children; skepticism over the role of the pharmaceutical industry and standard-bearers for vaccinations like Gates; and a general mistrust of science.

Even if an undecided person is not swayed by all of these arguments, just one is enough to make them hesitant, he says.

“They each have different flavors versus the pro-vaccination vanilla message which is just, ‘Have your vaccine, it’s good for you,’ ” he says.

One question that concerns public health experts is how much the anti-vaccination movement is growing organically, and how much it is being stoked by a small but well-organized and well-funded group of activists.

Stop Mandatory Vaccinations is run by Larry Cook, who describes himself as a “natural living” advocate who solicits donations on his website for the cause, which go directly into his personal bank account, according to his website.

Whoever is behind the increase in anti-vaccination sentiment, public health officials in the U.S. know they have to act fast to halt it if they want to ensure any COVID-19 vaccine provides herd immunity.

Part of that is about communication. Johnson warns that unless supporters of vaccinations can counter the anti-vaxxers with “guerrilla marketing” that reaches people online, they run the risk of losing the immunization battle: “Otherwise, I think it’s a lost cause.”

Researchers suggest other tactics too.

A report by Johns Hopkins University in July recommended delivering vaccines in more familiar surroundings rather than hospitals and large health centers, as well as making sure advocacy campaigns are led by community leaders rather than just doctors.

However, many public health experts fear that government compulsion is unlikely to be effective, and warn that heavy policing of vaccine uptake could backfire.

“It would be very difficult to push people to get vaccinated with heavy government intervention,” Bloom says. “If you cannot even mandate face masks, how are you going to mandate that people take a personal risk with a vaccine? I can’t imagine that being politically viable.”

Others believe the surge in people expressing doubts over a COVID-19 vaccine will dissipate once one becomes a reality.

Fineberg says many of the vaccines that have attracted opposition in the past were for diseases that had been all but eradicated, leading to a sense of complacency, whereas the coronavirus is a near and present danger.

“The big difference with COVID is that it’s not invisible.... It is highly feared and enormously disruptive,” he says. “One of the key ingredients that feeds the general anti-vaxxer movement — the invisibility of the health threat — is missing in COVID.”

Fineberg also points to the fact that drugmakers have been able to quickly enroll volunteers on to trials of their vaccines as a sign that the anti-vaccination movement might not be as strong as some fear.

He suggests that schools, universities and employers might have more success than the government in spurring vaccinations, especially if they insist that students and workers get vaccinated as a precondition of attending places of work or education.

“If Congress extended vaccine liability protections to any institution that requires it, and insulated them, that would change the equation,” he says.

Such a move would not be enough to change McVay’s mind. If her son’s university were to insist on his vaccination before he could attend classes, “I think my advice to him would be to sit out a semester,” she says.