Four years after a gunman terrorized her high school, she is still writing about mass shootings 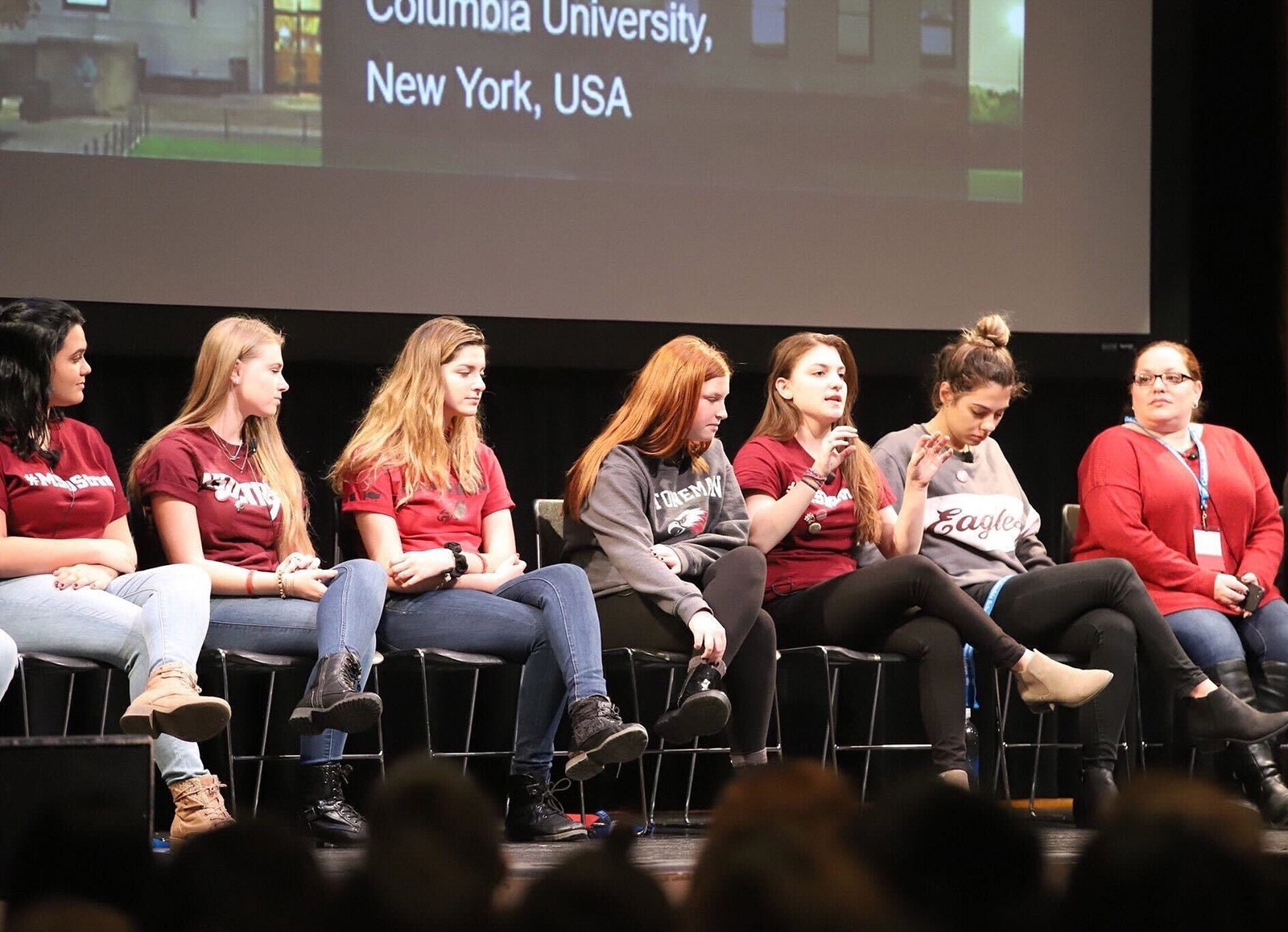 REBECCA SCHNEID, third from right, speaks on a panel of journalism students from Marjory Stoneman Douglas High in 2018. () 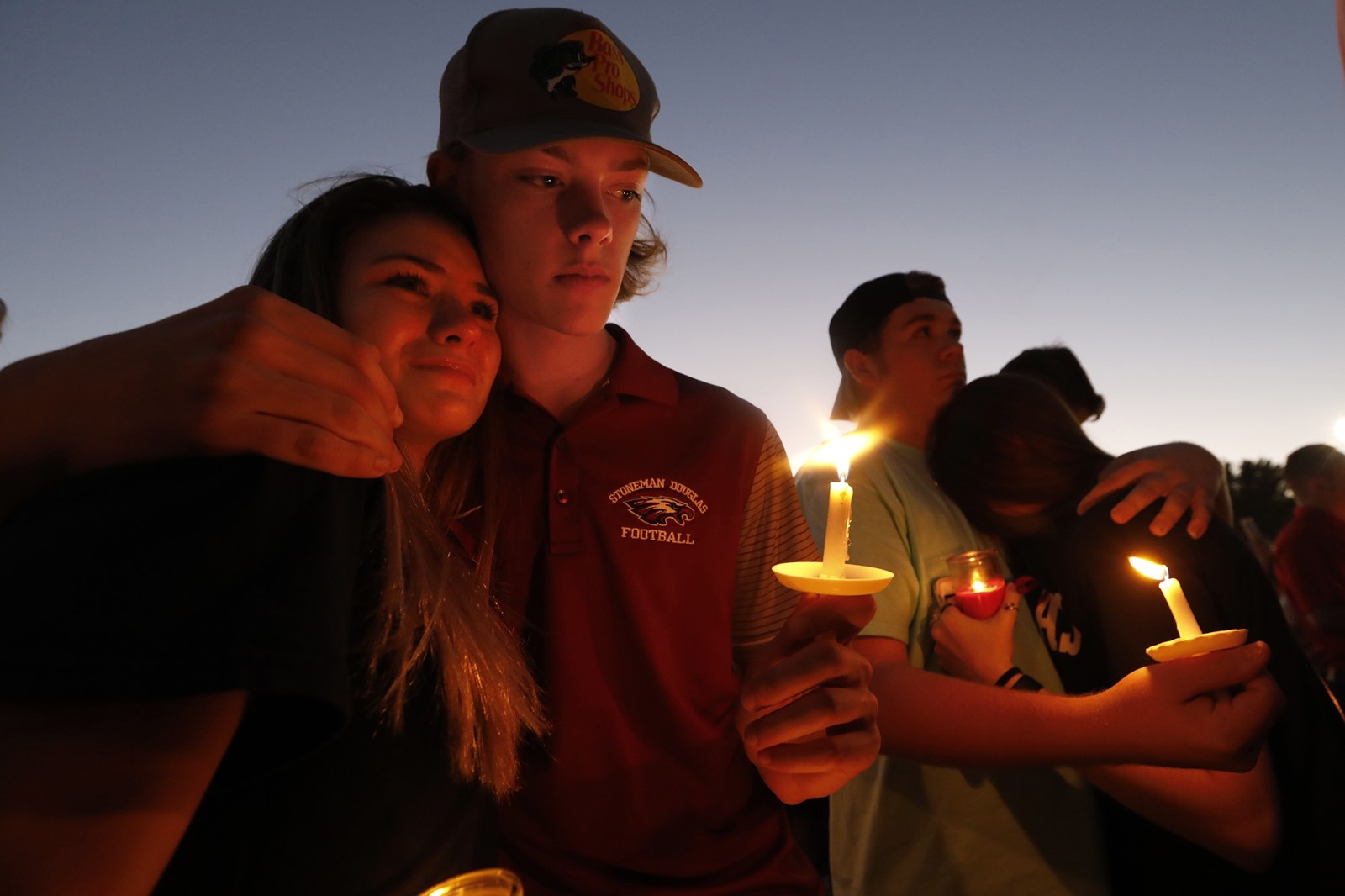 A VIGIL at Pine Trails Park in Parkland, Fla., in 2018 to remember those who were killed and injured in the shooting. (Carolyn Cole Los Angeles Times)
PREVIOUS IMAGE

n my first journalism job, I wrote two obituaries and edited 17. They were about the classmates and teachers who died in the mass shooting at my school.

In my first journalism job, I hid from an active shooter inside the newspaper room’s photo closet.

In my first journalism job, I returned to that room every single day to write about the trauma and its impact on all our lives.

I was 16, a junior in high school and editor in chief of my school newspaper. It was 2018.

I start with this not for shock value or an attempt at gaining sympathy, but simply to share the truth of my life. The truth I skirt around whenever someone asks what city I am from or how I learned I wanted to write or what my high school was named.

I have come to learn that it is not something to shy away from. I need to tell this story for anything else I say here to make sense.

I don’t remember writing those obituaries as much as I know I did them. I don’t quite remember the drive to Joaquin Oliver’s house three weeks after he was killed — but I know it was the most nerve-racking 15 minutes of my life.

Before Feb. 14, 2018, Joaquin was someone I knew only in passing. But then I was driving to his house to speak with his sister, Andrea, to talk about a young man whom neither she nor I would see again.

This interview terrified me — as a journalist and just generally as a human being. It is so inexplicably difficult to speak to someone who has just lost a loved one, let alone interview them about the person who died. Do I talk about Joaquin in the past tense or present tense? What should I not talk about? How can I make this experience as painless as possible for Andrea? I asked myself these questions over and over.

Yet, there was also catharsis in the autonomy given to me and my classmates. We wrote the stories that mattered about our classmates. Not those TV media empires that came for one week to capture the carnage without any knowledge of who these kids were.

So, when someone asks how I got into journalism, it does not evoke the happiest memories, or memories that I want to think about.

Yet, I am here, in the third week of my internship with The Times, thinking about it. Here I am, after four years away, writing about the same thing all over again.

When I went to college, I decided I wouldn’t think about it — in fact, I made sure no one would. I was not from Parkland, Fla., I was from South Florida only. Specifics were strictly forbidden. Orientation was a week of anxiety-filled moments, hoping no one would probe deeper into my life, look me up on Google, or recognize my name and face.

After all, was that all I would be to them? And, when I started journalism internships, was that all they thought of me? Was that why I was there?

As much as I would have liked to put it all in a box in the back of my mind, it wasn’t feasible. As white supremacist attacks and more mass shootings came and came and came and did not stop, there was no box big enough to hold it all.

I covered gun violence during internships at the 9th Street Journal and the South Florida Sun Sentinel, and started to understand the secondhand trauma those who covered my school shooting had felt.

But where other journalists started training in trauma-informed reporting — which creates a safe space for interviewees and requires journalists to understand what survivors are expecting when journalists interview them — it was already ingrained in me. It was how I began and how I continued my work.

“Will you be OK doing this?” many of my editors would ask before putting me on stories related to gun violence or acute trauma. And the truth is, there was no answer to that besides “I have to be.” It follows me everywhere. It does not stop.

If I sound negative or dire, this is because gun violence in this country is both of those things. Peace does not exist here — not while nothing continues to be done. Beyond what happened to me and my classmates, beyond what happens in these widely publicized mass shootings, this issue is ever present and overwhelming. And not just to me.

I tried to write about mutual aid funds, nonprofit work, activism, whatever could give me hope for a caring future. And yet, there have been 250 mass shootings in 2022 alone. And it’s only June.

I arrived in L.A. for this internship with The Times four days after the elementary school shooting in Uvalde, Texas, which killed 19 students and two teachers, less than one month after the shooting at a grocery store in Buffalo, N.Y., in which 10 people were shot to death.

I was back in Parkland, Fla., packing to leave for L.A. as news vans flocked around the school, as they always did after a shooting. My girlfriend had come to visit, and I showed her around my hometown, laughing without humor that she got the “full Parkland experience.” My mother told me she was glad I had company as the news of Uvalde broke.

I realized that none of the students who go to Marjory Stoneman Douglas High School now were there back on Feb. 14, 2018, when the shooting happened. It left me feeling some emotion between hollowness and deja vu.

Four years had passed, and still, it follows me around like a ghost or a shadow. Even as I start this new chapter of my career. Even as I continue to wonder if I would be where I am now had that not happened to me. Nothing has changed. Or, even if I have changed, the world around me hasn’t.

I realized that, as much as I try to separate myself from gun violence, I also wanted to report on the March for Our Lives in L.A. If for no other reason than because I had experienced it, I was pretty sure people would talk to me.

Some might say I could not be an objective reporter on gun violence because of my experiences. There are many who have said it, in vindictive responses and Twitter threads. I say, reporters are like all people: Humans who have experienced stuff in their life, and that stuff informs how they see the world, how they interact with communities, how they understand why we are in the country that we are in.

As much as objectivity is a tenet of journalism, there are some things we all can agree on: Mass shootings are bad. I, who have experienced one, and another reporter who never has will (hopefully) agree on that.

And, since I know what it’s like to hide from a shooter in a closet, it can be easier for others who have experienced that too to tell me about it.

Since I know what it’s like to watch the death count rise on the news mere moments after your escape, it can be easier for them to tell me about it.

Since I know what it’s like to have the SWAT team’s machine guns pointed at my head, it can be easier for them to tell me about it.

On June 11, after the March for Our Lives, my close friend from high school — someone I had hidden with back on Valentine’s Day2018 — texted me.

We were 16 and 17 when this happened to us, and now she and I are 20 and 21. So much has changed in our lives. Both of us have grown up to see the ways the gun violence prevention movement could learn from other groups, could include a greater understanding of gun suicides and domestic violence and gang violence.

We have tried to look past the bubble of Parkland — and toward the white supremacy that lies in the underbelly of so much violence in this country.

Both of us have spent years in college; both of us have cut our hair and fallen in love and become adults — but we are also in the same exact place we were four years ago.

The march itself was surreal to cover. I saw my old classmate Cameron Kasky, whom I hadn’t seen since high school, and wished I wasn’t seeing again just to interview him about mass shootings.

I held back tears as one of the speakers read out the names of all the mass shootings that had occurred in the last month. And held back more as a young girl told her story of watching her best friend die after being shot in the leg at Saugus High School in 2019.

And as we began to walk, I realized the march was smaller, certainly, than the one I had attended more than four years ago in Washington, D.C., the first March for Our Lives, which was organized by my Marjory Stoneman Douglas classmates.

Soon, though, the crowd grew to more than 8,000. And I was moved that even this many people still cared.