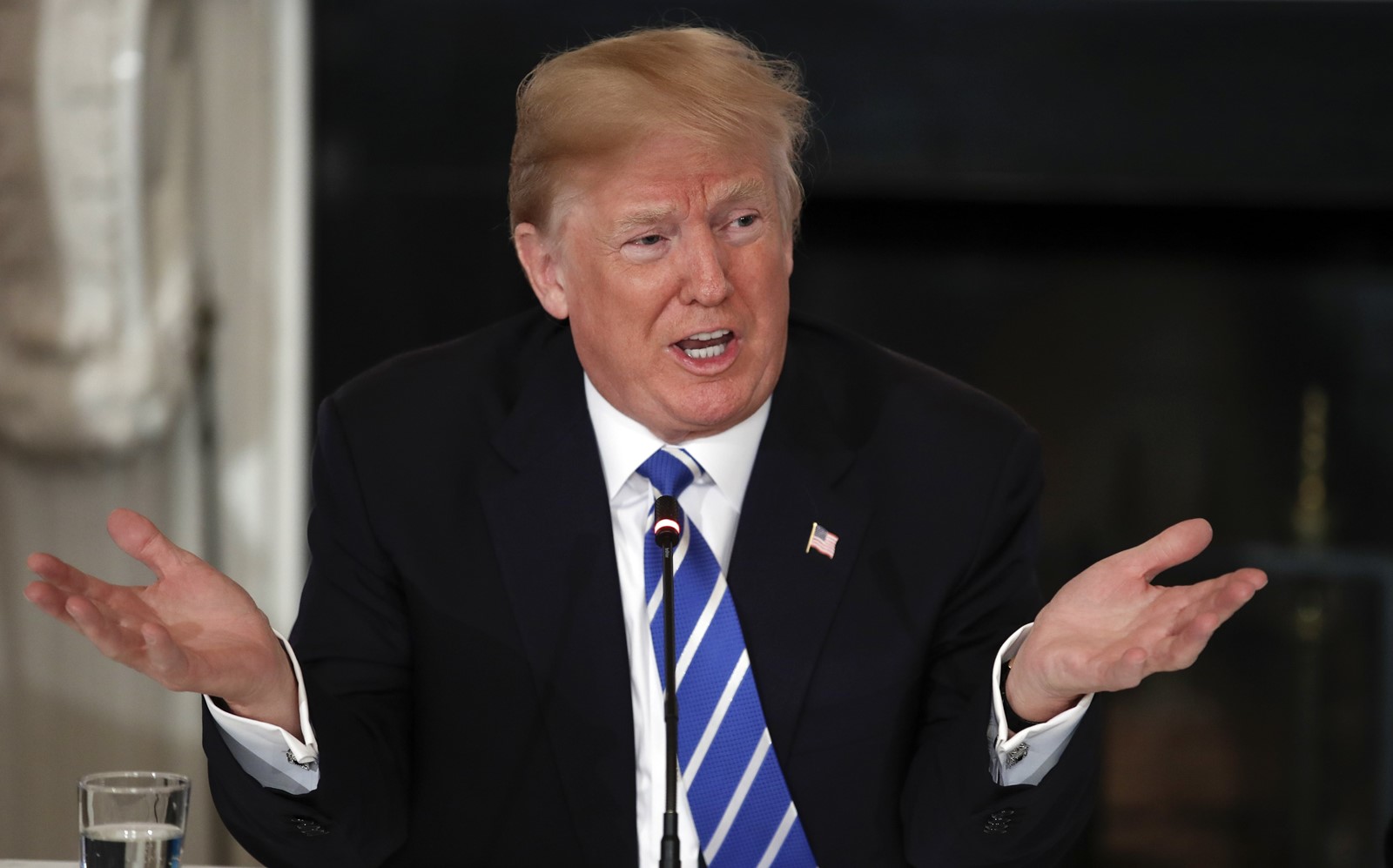 The Trump administration proposed a spending plan on Monday that projects deficits as far as the eye can see, giving up the longtime Republican goal of a balanced budget to champion a spending plan replete with cash for a host of military programs and some domestic ones the president’s supporters might admire.

The budget calls for about $716 billion in annual defense spending, more than $100 billion above the level President Trump requested last year. Add in the tax cuts Republicans pushed through in December and the extra spending Congress approved just last week, and the result is a flood of red ink projected to send the national debt ever higher.

Trump’s budget anticipates deficits throughout the next 10 years even if Congress were to approve some $3 trillion in cuts over that same time period that he’s proposing for a wide range of federal programs. Both parties already rejected most of those cuts last year and have shown little interest in pursuing them.

The deficits persist even though the White House is forecasting extremely optimistic levels of economic growth. If growth falls short of those projections — most economists think it will — deficits would be higher still.

As a result, the budget marks something of a milestone — the Trump administration’s abandonment of the quest for budget balance that the Republican Party has claimed as a guiding light for years, at least rhetorically.

In reality, deficits have often soared under Republican presidents as the party has put cutting taxes ahead of balancing budgets on its list of priorities. In the past, however, Republican administrations have taken pains to at least come up with a budget that would balance on paper.

The budget unveiling led off with the administration’s infrastructure plan, released with a statement from the president promising to build gleaming new roads, bridges and highways “all across our land.”

Despite the bold promise, the plan involves a relatively small amount of new federal spending — $200 billion offset, at least partially, by cuts to other programs. The administration claims the new money would spur some $1.5 trillion in infrastructure investments from state, local and private sources, but that would depend to a large degree on the willingness of local and state officials to raise taxes for transportation projects.

“Washington no longer will be a roadblock to progress,” Trump told a group of state and local officials gathered at the White House.

Progress, as laid out in the budget, means building and spending on projects important to Trump’s core supporters. The president proposes investment in popular causes including fighting the opioid epidemic and bolstering medical care for veterans.

He is also asking for $1.6 billion to build 65 miles of border wall in the Rio Grande Valley in south Texas, just one installment of the larger border wall promise that helped propel him to the Oval Office. He also proposed pouring more money into immigration enforcement.

But Trump’s plan also defines progress as cutting programs that many of his voters don’t like, including climate change research at the Environmental Protection Agency and programs under the Affordable Care Act, also known as Obamacare.

His budget would slash almost $700 billion in federal healthcare spending that helps low- and moderate- income Americans who rely on insurance marketplaces created by the 2010 healthcare law.

As Republicans proposed last year, the plan would replace much existing healthcare spending with grants to states, allowing each one to craft its own health program. Similar proposals last year failed in the Senate, and Senate Majority Leader Mitch McConnell (R-Ky.) has indicated that the chamber won’t consider another run at Obamacare this year.

The spending blueprint also outlines nearly $1.5 trillion in cuts over the next decade to Medicaid, the government health plan for the poor — another proposal that was rejected in Congress last year.

The administration said the sweeping reductions reflect a goal to cut regulation and “empower patients and doctors.” Independent studies, as well as evaluations by the nonpartisan Congressional Budget Office, however, have projected that cuts of that magnitude would leave tens of millions of Americans without health coverage.

One illustration of the gap between the budget and congressional reality: Last week, as administration officials were putting the final touches on their spending plan, lawmakers reached a bipartisan budget deal that included an agreement to raise spending on both military and domestic programs over the next two years. Congress is highly unlikely to throw out its own decisions in favor of embracing those of the president.

Trump’s budget director, Mick Mulvaney, acknowledged as much in the letter he sent to House Speaker Paul D. Ryan (R-Wis.) transmitting the budget on Monday. The administration doesn’t believe the new spending decisions “comport with its vision” for the role and size of the government, Mulvaney wrote.

The unlikely cuts are just part of what makes Monday’s budget partially fiction. The spending plan also assumes that the country’s economic growth will surge to greater than 3% this year and stay above that level for several years to come — a projection most economists think is optimistic. The Congressional Budget Office estimates that the gross domestic product will expand at somewhere about 2% a year over the coming years.

Because government revenue rises with economic growth, the deficit will be even higher than the budget acknowledges if the administration’s rosy forecast proves inaccurate.

“The country is facing a massive fiscal challenge, and the president’s budget doesn’t own up to these realities and fails to call for a suite of credible policies that would help change course,” said Maya MacGuineas, president of the Committee for a Responsible Federal Budget, which over the years has chastised presidents of both parties for not balancing the budget.

“The budget has too many gimmicks, exaggerated savings and rosy assumptions. Most troubling, it doesn’t make the credible hard choices necessary to help bring the debt back to more manageable levels.”

In recent years, Republicans preached that message loudly. GOP lawmakers, led in part by Mulvaney, fought President Obama’s spending plans through much of his presidency, insisting that the government should not spend more than it takes in.