No matter what Mueller finds, Trump faces investigations into nearly every aspect of his career 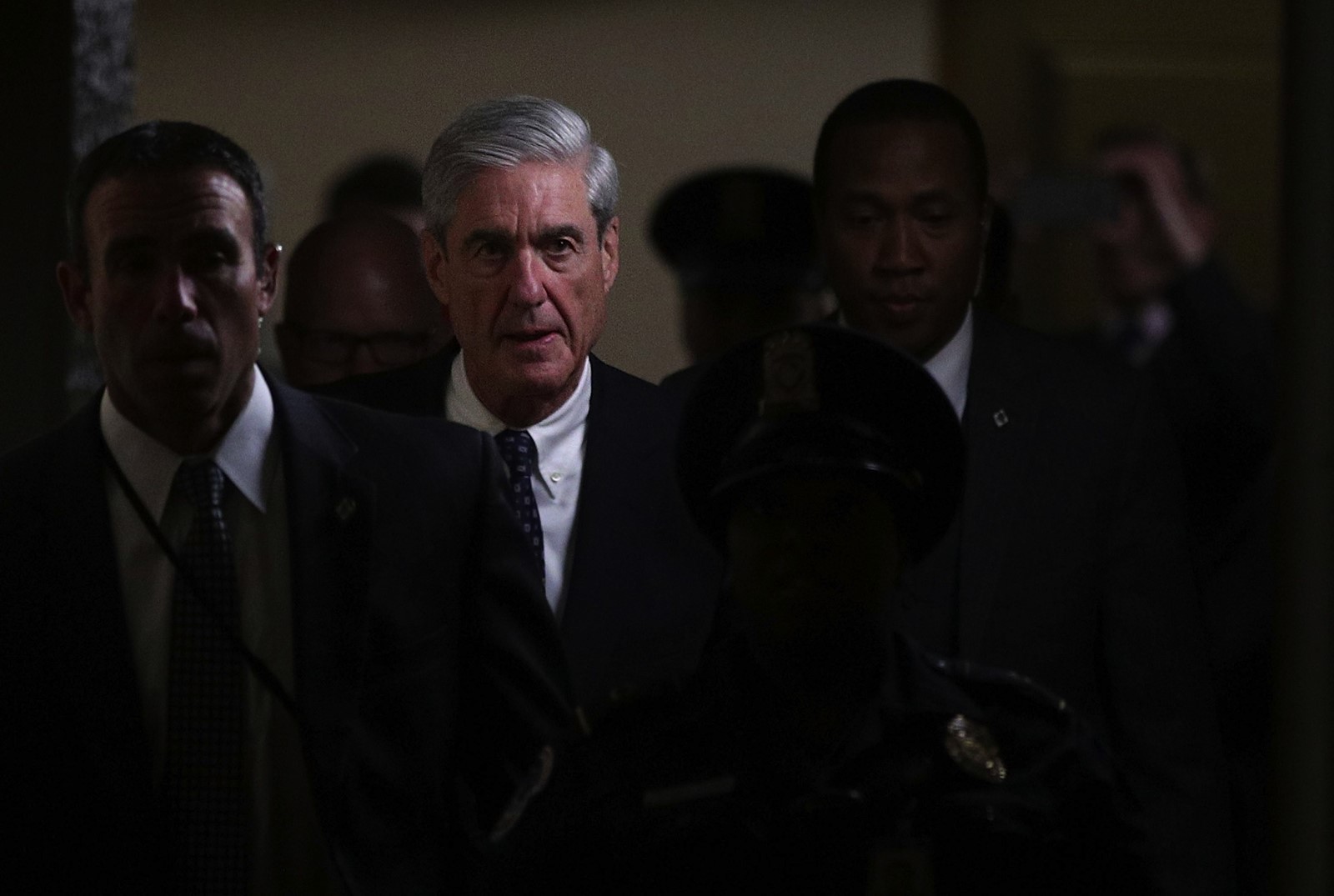 President Trump is likely to celebrate if the final report from special counsel Robert S. Mueller III echoes Trump’s relentless claims of “no collusion” with Russia — or at least doesn’t outline a criminal conspiracy between his 2016 campaign and the Kremlin.

No matter what Mueller concludes, the president remains in considerable legal jeopardy.

The Russia probe spawned a web of federal, state and congressional inquiries into virtually every aspect of Trump’s career — the company that bears his name, the campaign that won him the White House, the inauguration that celebrated his improbable victory, and the administration that he leads from the Oval Office.

Prosecutors in Manhattan, Brooklyn, Washington, D.C., and Virginia are all pulling at threads that the FBI started unraveling two years ago. Legal problems, and possibly further indictments of Trump’s friends and aides, are likely to shadow the president for the rest of his White House tenure.

“Once you turn over one stone, there are a host of other matters that come to light,” said Bruce Udolf, who worked for the independent counsel’s office that investigated President Clinton. “And you start turning over those stones as well.”

In addition to the 34 people charged by Mueller, other crimes have been uncovered in other jurisdictions.

The U.S. attorney in the Southern District of New York, for example, successfully prosecuted Trump’s personal lawyer, Michael Cohen, for hush money payments to two women who claimed they had affairs with Trump. He pleaded guilty to two campaign finance violations, among other crimes.

Prosecutors from the same office also have issued subpoenas for records from Trump’s inauguration, including how the inaugural committee spent a record $107 million. The U.S. attorney for the Eastern District of New York, based in Brooklyn, is reportedly conducting a related probe.

So is the U.S. attorney in Washington, where a lobbyist, Sam Patten, has pleaded guilty to helping a Ukrainian oligarch illegally buy tickets to Trump’s inauguration.

And the U.S. attorney in the Eastern District of Virginia has charged an Iranian American businessman in illegal lobbying on behalf of Turkey, a case that grew out Mueller’s prosecution of Trump’s former national security advisor, Michael Flynn.

State officials are also digging into Trump. In December, the New York state attorney general forced the Donald J. Trump Foundation, once billed as the charitable arm of the president’s business empire, to dissolve and give away remaining assets under court supervision.

The attorney general, Barbara Underwood, accused the foundation of “functioning as little more than a checkbook” for Trump’s business and political interests, and of “a shocking pattern of illegality” that included unlawfully coordinating with his 2016 presidential campaign.

Her office also has pursued a lawsuit that could bar Trump and three of his adult children from the boards of other New York charities, as well as order them to pay millions of dollars in restitution and penalties.

State authorities also could blunt Trump’s ability to pardon allies because his power extends only to convictions under federal law.

The Manhattan district attorney’s office is preparing state criminal charges against Paul Manafort, Trump’s former campaign chairman, to ensure he goes to prison even if the president pardons him for federal crimes, several news outlets reported Friday. Manafort has been convicted in two federal cases brought by Mueller.

In Congress, newly empowered House Democrats are rolling out investigations into Trump’s unreleased tax returns, a proposal to transfer nuclear technology to Saudi Arabia, the White House’s handling of security clearances for classified information, and more.

“Once the oversight process kicks in, you never know where it’s going to end up,” said Jim Manley, a former senior Democratic aide on Capitol Hill. “With Democrats in control, no one can expect that they know how this is going to play out.”

Trump has slammed the congressional probes as “presidential harassment.” Democrats are going “nuts” while “looking at every aspect of my life, both financial and personal, even though there is no reason to be doing so,” he tweeted.

Congressional investigations can fizzle out in partisan finger-pointing. But some uncover real scandals and snowball into direct threats for the White House.

“Investigations take on a life of their own, and they usually end up much broader than what they originally looked at,” said Julian Zelizer, a presidential historian at Princeton University.

The independent counsel appointed to investigate Clinton in 1994 started with a suspicious real estate transaction in Arkansas, for example. Four years later the office finished by probing the president’s affair with a White House intern, a scandal that led to Clinton’s impeachment by the House.

Watergate, the mother of all scandals, began with a bungled burglary at the Democratic National Committee headquarters in 1972. It ended two years later with President Nixon resigning from office and many of his top aides in handcuffs.

“Every time we developed one lead, another one came along,” said Rufus Edmisten, who served as deputy counsel on the Senate Watergate Committee.

After he pleaded guilty to campaign finance violations for the hush money payments, Cohen told the court in New York that Trump had directed the illegal scheme, the most direct accusation yet that the president was personally involved in a crime.

The escalating investigations in New York have alarmed Trump’s allies.

“I think that the Mueller investigation is not the president’s biggest problem,” former New Jersey Gov. Chris Christie, a former U.S. attorney, said recently on MSNBC. “Southern District of New York’s investigation has always been much more dangerous.”

Some prosecutions have pierced the murky world of foreign lobbying, which was loosely scrutinized before Mueller was appointed.

Flynn, who was forced to resign as Trump’s national security advisor after lying about his contacts with the Russian ambassador, later admitted to working as an unregistered foreign agent for Turkey during the 2016 campaign.

“Arguably you sold your country out,” a judge told him in December.

The Flynn investigation spawned another case. Federal prosecutors in the Eastern District of Virginia recently charged Flynn’s former business partner Bijan Kian with conspiracy and acting as an unregistered foreign agent for Turkey. He has pleaded not guilty.

Also under indictment is Kamil Ekim Alptekin, a Turkish businessman who hired Flynn’s firm and has denied that Ankara played any role in the contract.

A different scheme was unearthed while Mueller prosecuted Manafort and Rick Gates, the chairman and deputy chairman of Trump’s 2016 campaign, for money laundering, conspiracy and other crimes related to their work as political consultants in Ukraine.

Skadden, Arps, Slate, Meagher & Flom, a prominent law firm that worked with Manafort, agreed in January to forfeit $4.6 million from the project.