Records indicate that Kazakh billionaire, the son-in-law of a former president, profited from state contracts. 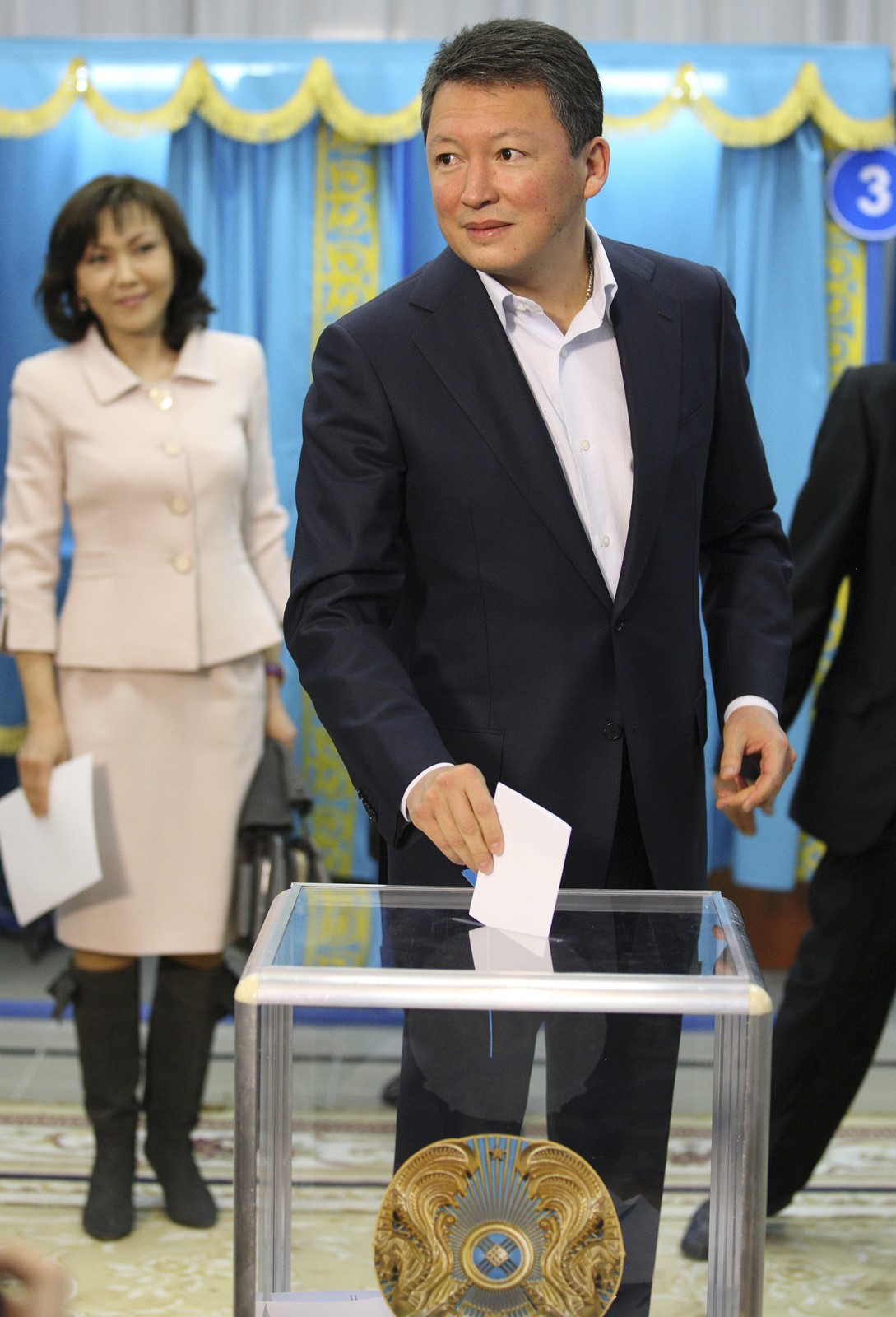 A Gazprom director profited from a secret scheme linked to the construction of a multibillion-dollar gas pipeline between central Asia and China, according to documents seen by the Financial Times.

The documents indicate that staff and consultants working for Timur Kulibayev designed a scheme for the Kazakh billionaire to receive at least tens of millions of dollars from contracts related to the vast project.

Kulibayev, who has served on the Russian energy giant’s board since 2011, is the son-in-law of a former Kazakh president and has wide-ranging business interests, including in banking, mining and real estate.

As one of the most powerful officials in the country, he oversaw the state companies that awarded contracts to build the pipelines across Kazakhstan.

Emails sent between 2008 and 2014 and leaked by a whistleblower contain detailed descriptions of a setup that appears to allow Kulibayev to receive a share of the profits from pipeline contracts granted to ETK, a company owned by Russian businessman Alexander Karmanov.

Under the scheme, ETK would buy pipes from plants in Ukraine and Russia. But first it would sell those plants the steel to make the pipes at a huge markup.

Contracts seen by the Financial Times show that an ETK company in Singapore agreed to buy steel produced by Jiangsu Shagang Group of China at $935 a ton and to sell steel to the Russian pipeline manufacturer TMK for $1,500 a ton.

TMK’s contract envisages a total outlay of “approximately $200 million,” which equates to a gross profit of $75 million for ETK.

However, the documents seen by the Financial Times suggest that most of that money was not destined for Karmanov’s company but for Kulibayev.

They reveal details of a corporate structure designed to channel the profits from the steel markup through companies in Singapore and the United Arab Emirates and ultimately to Kulibayev.

Emails and a PowerPoint presentation indicate Kulibayev was to receive 70% of the profits, a cut that would have made him $53 million from this one transaction alone.

In one email, a consultant sent bills to Kulibayev’s company for completing the work to set up the scheme.

The emails appear to show that, to make sure that this arrangement could not be changed without Kulibayev’s agreement, his staff proposed that a nominee of his be granted a stake in ETK that would confer control over company decisions.

In October 2012, an employee at ETK emailed Kulibayev’s representatives to say that Karmanov had personally agreed to the proposal. Emails among Kulibayev’s advisors reveal the name of the nominee as Murat Balapanov, a Kazakh businessman.

Russian corporate records show that on Dec. 21, 2012, Balapanov’s name was recorded in public filings as a new shareholder in ETK. His share was 0.00001% of ETK’s equity. He was also named president of the company. Balapanov could not be reached for comment.

Kulibayev’s lawyers said he “has never had any interest or stake in any ETK entity, directly, indirectly or via any kind of nominee arrangement or similar scheme.”

In response to questions from the Financial Times about the apparent scheme to divert contract profits described in the leaked emails, Kulibayev’s lawyers said he “has never been involved in any of the activities described.” They said the suggestion that “70% of various profits were funneled back to an entity of our client’s based in Singapore is false.”

In correspondence with the Financial Times, his lawyers said he was the target of a disinformation campaign.

However, the emails that outline the pipeline scheme come from a substantial cache leaked by a whistleblower. They contain documents that corroborate one another and are further supported by corporate records from Russia, Singapore and the U.K. The Financial Times is publishing a selection of the documents.

The Asia Gas Pipeline project was part of a grand undertaking that accelerated a shift of economic power from west to east.

In August 2007, President Nursultan Nazarbayev of Kazakhstan was joined by his Chinese counterpart, Hu Jintao, in the Kazakh capital, Astana, to announce new pipelines that would carry gas from central Asia, long mostly sold to Europe, to China.

Built jointly by Kazakhstan and China, these pipelines, all since completed, would stretch more than 1,864 miles and be funded with Chinese state loans. The first two lines would cost $7.5 billion, with a third to follow for some $3 billion and a fourth after that.

Among the biggest winners in the bonanza of contracts related to the pipeline was Karmanov. In the 1990s, he was the proprietor of the Daydreams strip club, popular with post-communist Moscow’s new rich. Accounts of his career since then provide few clues to how he has progressed to be listed by Forbes as one of Russia’s “king contractors,” those who have benefited most handsomely from government contracts.

A person who knew Karmanov when they worked on contracts for Transneft, Russia’s state oil transport group, called him a “self-made man” who “knows a huge number of people in the power structures.”

Little information on these connections has emerged, though he has talked about his friendship with Arkady Rotenberg, a fellow king contractor who has been targeted for U.S. sanctions on the Kremlin’s inner circle. Karmanov sponsored the St. Petersburg judo club founded by Rotenberg, a former sparring partner of Russian President Vladimir Putin, who was the club’s honorary president.

Despite never having constructed a factory, Karmanov established himself as one of the dominant figures in a highly lucrative market: supplying the steel pipes for the pipelines that were in high demand during Russia’s energy boom of the 2000s.

The Asia Gas Pipeline project was a chance for Karmanov to conquer new markets, and conquer he did.

Emails seen by the Financial Times contain commercial agreements indicating that between 2008 and 2012 his companies won steel pipe contracts for the project worth at least $370 million and perhaps three times that amount. They also won contracts worth at least $1.5 billion to trade the oil and gas that Kazakhstan’s pipelines carry.

One man towered over the Kazakh energy industry in which Karmanov prospered. Kulibayev had risen through Kazakhstan’s state energy company, then became first deputy chairman and, in 2011, chairman of the $80-billion sovereign wealth fund that oversaw all the state’s business interests, including the Asia Gas Pipeline project. By that time he was a billionaire in his own right. So was his wife, Dinara — daughter of the Kazakh dictator, Nazarbayev.

Kulibayev’s influence expanded. In addition to his role at Gazprom, the Russian state gas company at the center of Putin’s power network, his father-in-law was a key ally of the Russian leader.

Kulibayev came to Western attention when he was revealed as the mystery buyer who in 2007 paid $4 million over the list price to buy Sunninghill Park, the royal estate Queen Elizabeth II had given Prince Andrew as a wedding present. He also faced money-laundering allegations in a Swiss case that was ultimately dropped.

Kulibayev left the Kazakh sovereign wealth fund after an outcry over the massacre of striking oil workers by security forces in 2011. By then, Karmanov’s ETK had already won contracts to supply the first two phases of the Asia Gas Pipeline, an ETK planning document attached to one of the leaked emails indicates.

Contracts relating to the subsequent phases came ETK’s way in 2012, while Kulibayev was still in his other government post as advisor to his father-in-law.

ETK and Karmanov did not respond to requests for comment.

Separately, emails from another cache, leaked online in 2014, indicate that one of Kulibayev’s private firms may have benefited directly from the pipeline project.

A company he owned called Petroleum won a contract to transport 300,000 tons of steel for use in making the pipelines, according to a 2011 email from the company’s boss. Petroleum was valued at about $220 million shortly afterward, another email shows.

Kulibayev’s lawyers responded to questions on Petroleum by saying that the company “never received profits, directly or indirectly, from any business” related to the Asia Gas Pipeline.

The details of the secret pipeline scheme have emerged in part because of attempts by one member of Kazakhstan’s most powerful family to reveal corruption that he suspected his relatives of orchestrating.

Aisultan Nazarbayev was the grandson of Nursultan Nazarbayev, Kazakhstan’s ruler since Soviet days who in 2019 passed the presidency to an ally while retaining the title of “leader of the nation” and the chairmanship of the powerful security council.

Aisultan Nazarbayev, who lived between Kazakhstan and London, was a graduate of the British military academy at Sandhurst.

His father, Rakhat Aliyev, was found dead in 2015 in an Austrian prison. He was awaiting an extradition decision following an ugly split with his father-in-law, the Kazakh ruler, during which they traded allegations of corruption and ordering the deaths of opponents.

Aliyev’s lawyers questioned the official explanation of his death as suicide, as did Aisultan Nazarbayev.

After his father’s death, Nazarbayev turned to drugs and alcohol, for which he was treated in a Russian facility. After an incident in London in 2019 when he fled what he believed to be pursuers sent by his family and assaulted a police officer, he was given a fine and a suspended 12-month jail sentence. He was admitted to the Priory private hospital near London for treatment for addiction, depression and anxiety in January 2020.

The following month, he wrote lengthy accounts on Facebook detailing what he said was corruption from which members of his family profited. He also said that he had sought asylum in Britain, claiming that his family wanted him killed.

Around this time, Nazarbayev had an initial discussion with the Financial Times about revealing what he knew.

He also had a series of conversations with a Kazakh opposition figure in which he described corruption schemes in the oil and gas industry, naming certain members of his family and Kremlin figures. Some of the details match those in the documents the Financial Times has seen.

On Aug. 15, 2020, he was found dead in Green Park in central London. An autopsy gave the cause of death as cocaine toxicity. A London coroner is preparing to hold an inquest in the new year.