Forget Trump and the roaring economy. The midterm strategy is to demonize Democrats as wild-eyed radicals. 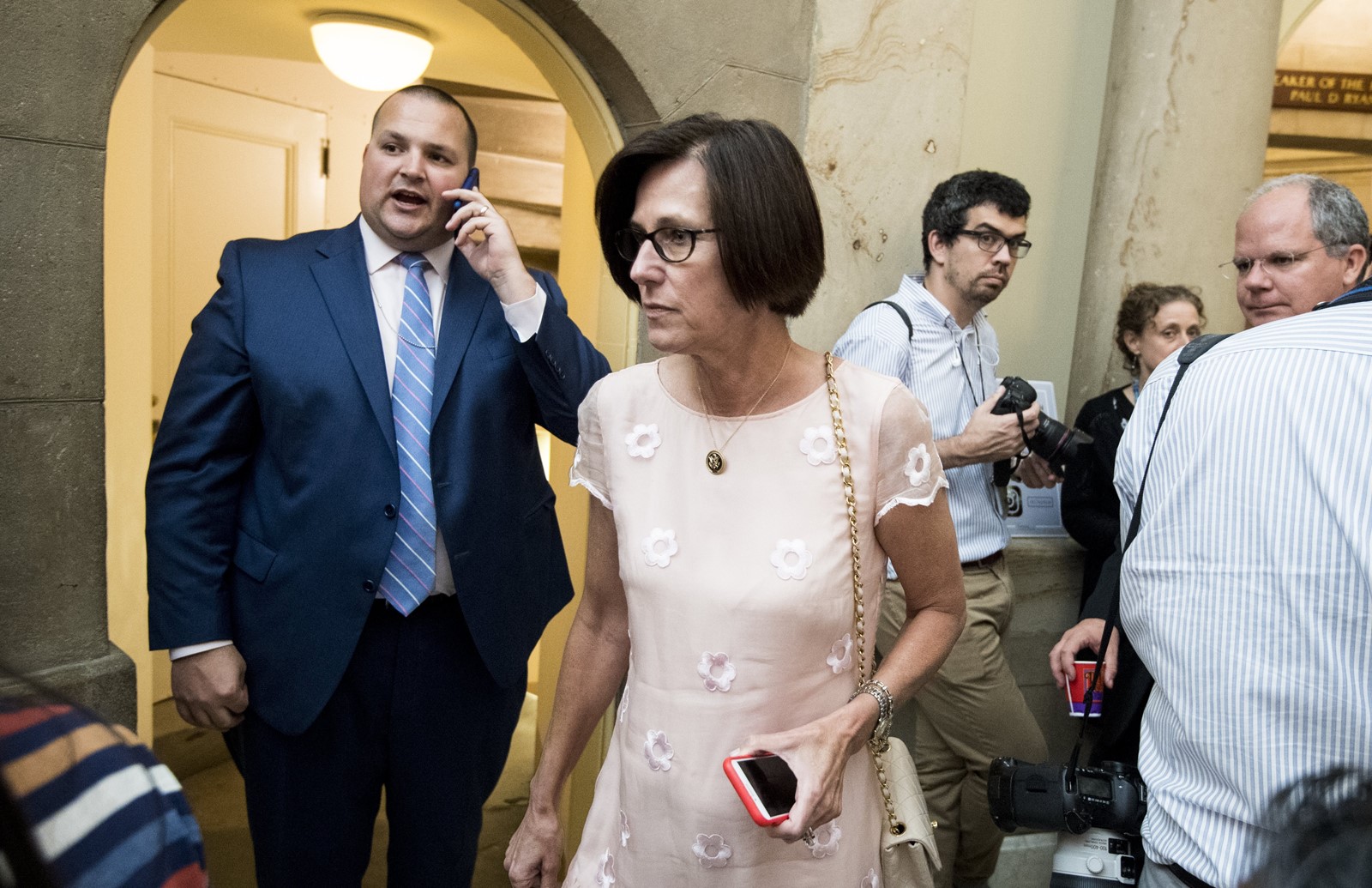 REPUBLICAN Rep. Mimi Walters says, “My opponent may say I’m a rubber-stamper” for the president, “but we’re moving the country in the right direction.” (Bill Clark CQ-Roll Call) 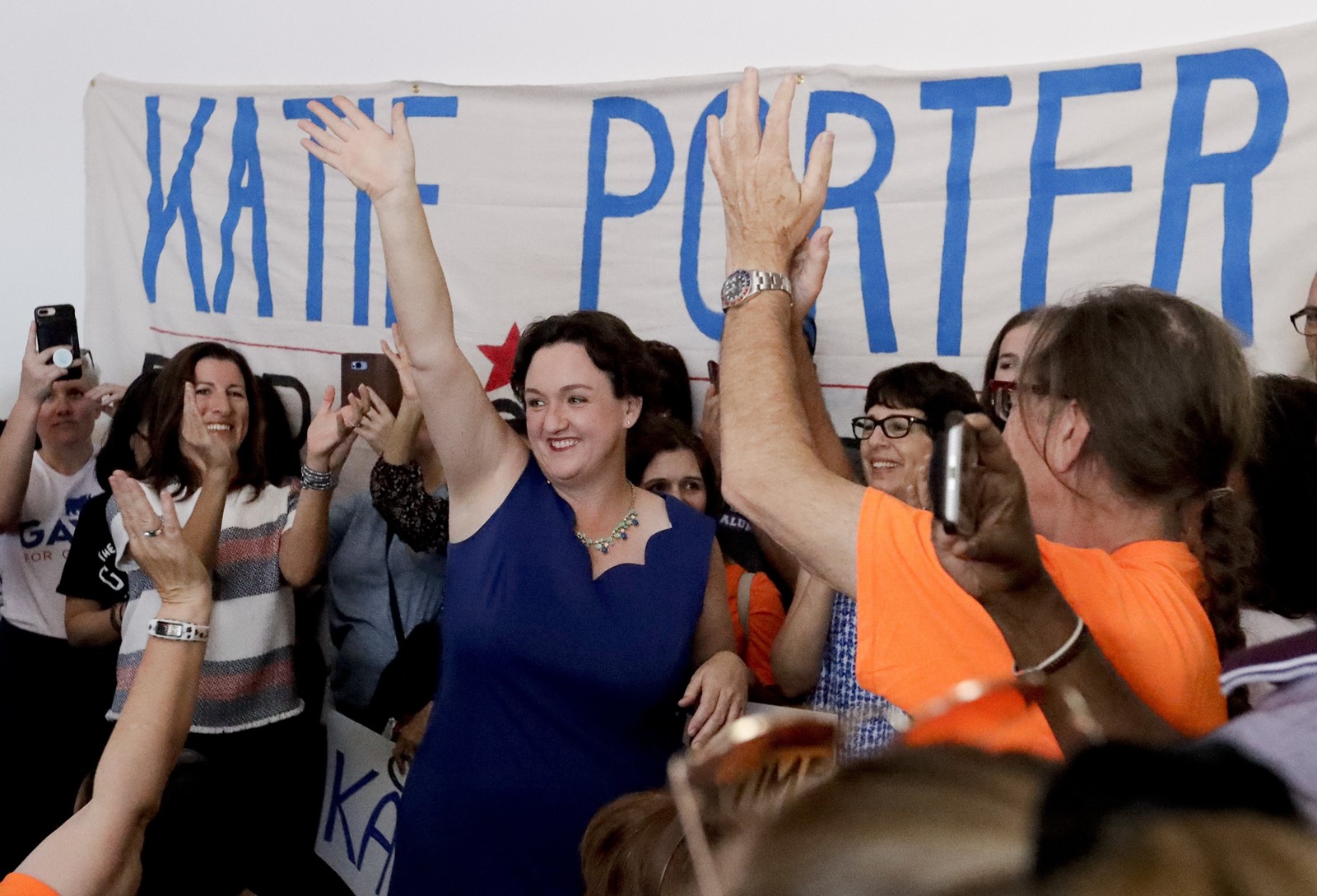 To hear Katie Porter tell it, she’s just your average Orange County mom, clipping coupons, shopping specials at the supermarket and puttering about with three kids in a Toyota minivan that’s pushing 120,000 miles.

But turn on the TV and you’re likely to see a more ominous portrait, etched in shades of black and gray. “Liberal Katie Porter,” the advertisement intones, in a voice aquiver with indignation. “Higher taxes. Open borders.”

Saddled with an unpopular president and getting little or no traction from a robust economy, Republicans have settled on a blunt-force strategy as they struggle to hang on to the House in November: Paint the opposition as wild-eyed and dangerous.

In the stucco suburbs of Southern California, in the heartland city of Omaha, in Kentucky’s horse country and beyond, the GOP and its allies are spending tens of millions of dollars attempting an epic feat of political re-engineering. They hope to turn the election from a classic referendum on President Trump into an up-or-down vote on challengers like Porter, a UC Irvine law professor battling two-term Republican Rep. Mimi Walters across the upscale subdivisions of inland Orange County.

“These races are very simple. We just need to let the voters know where the two candidates stand,” said Corry Bliss, executive director of the Congressional Leadership Fund, a strategic arm of Republicans on Capitol Hill, which plans to spend more than $100 million in dozens of contests across the country. “In a number of races, the Democratic nominee is too far left to win.”

For their part, Democrats are counting on a November wave big enough to overcome ideology and sweep in candidates who, in a different election year, might stand little chance in areas normally favoring the GOP.

“Republicans are kidding themselves if they think they can make this about the economy, about tax cuts, about deregulation,” said Democratic strategist Garry South. “It’s about who has a ‘D’ after their name, how much [voters] hate Trump and how much they want to pay Republicans back for enabling this guy.”

Indeed, a staple of Porter’s campaign is a recitation of Walters’ voting record — nearly 100% in support of Trump, according to the data-crunching website FiveThirtyEight.com — in a district the president lost to Hillary Clinton by 5 percentage points. Although registered Republicans continue to outnumber Democrats, the 45th District is one of seven in California that Trump lost and GOP incumbents won, making several of them prime Democratic targets.

“It doesn’t matter the issue, it doesn’t matter how much it hurts us,” Porter told a recent gathering of Democrats at Laguna Woods, a 55-and-older community tucked in the hills of Aliso Viejo. “Mimi rubber-stamps everything Donald Trump wants.”

To the contrary, Walters responded. “When I have disagreed with the president I have spoken up,” including objecting to higher tariffs and a proposed increase in the federal gas tax.

“My opponent may say I’m a rubber-stamper,” she said in an interview, “but we’re moving the country in the right direction.”

For the most part, candidates preferred by the Democratic establishment prevailed during the just-ended primary season, beating more left-leaning rivals who, strategists feared, would make for weaker competition in a general election. The most notable insurgent victories, by Alexandria Ocasio-Cortez and Ayanna Pressley in New York and Boston, respectively, came in districts so overwhelmingly Democratic their November election was sealed.

Amy McGrath, who faces three-term Republican Rep. Andy Barr in Lexington, Ky., is being portrayed as a radical environmentalist who would ravage the state’s cherished coal industry.

“It’s absolutely essential voters understand exactly where [candidates] are on the spectrum of moderate to progressive,” said Jesse Hunt, a spokesman for the National Republican Congressional Committee, which placed the ad calling McGrath, a former Marine fighter pilot, “too liberal for Kentucky.”

Here in Orange County, Porter defeated David Min, a faculty colleague at UC Irvine’s law school, who ran as the more moderate alternative and won the blessing of the state Democratic Party.

Fighting for the endorsement at the party convention in February, Porter — a protege of liberal Massachusetts Sen. Elizabeth Warren — insisted the contest against Walters was “not just about electing any Democrat; it’s about electing a Democrat who will act like a Democrat.”

Since emerging from the June primary, however, Porter has backed off such litmus-testing, making no mention of her Democratic affiliation in advertisements. “I won’t be afraid to take on leaders of both political parties,” she vows.

She’s broken with many fellow Democrats by supporting repeal of a 12-cent hike in the state gas tax, even though Porter once praised lawmakers who voted in favor. That, she explains, was before learning there would be no significant road projects benefiting local residents.

She tiptoes around other issues that might highlight her leftward leanings.

In an interview, Porter did not explicitly support the establishment of “sanctuary cities,” in which law enforcement limits its cooperation with federal immigration authorities, but rather suggested local tax dollars would be better spent on other priorities. Several cities in the district have voted to oppose the state’s controversial sanctuary law.

(Porter does not, however, favor “open borders,” as Republican advertising claims. “Every country needs to know who’s entering and exiting,” she said.)

Her advertising focuses less on her support for expanding government-provided healthcare, a heart-and-soul issue for those on the political left, and more on Walters’ vote to repeal the Affordable Care Act and its popular provision requiring insurers to cover patients with preexisting conditions.

Asked a question originally put to her on Bloomberg TV, whether she is more a socialist or centrist, Porter once more declined to say. “I don’t find these kind of labels particularly helpful because everybody gloms onto them and uses them differently,” she said. But the 44-year-old Democrat doesn’t spend her entire time soft-pedaling her philosophy.

In a turnabout — it’s usually Republicans who use taxes as a bludgeon — Porter assails Walters for supporting the sweeping new Republican law that limits deductions for state and local taxes, which is expected to hurt many in this high-income, high-cost stretch of Southern California.

“We need a champion for tax fairness,” Porter told the meeting of Laguna Woods Democrats, “not someone who will sell out Orange County because Donald Trump” and the House Republican leadership “asked her to do so.”

Walters, 56, countered by suggesting many residents will be spared the alternative minimum tax, which was eliminated under the legislation, and will still be able to deduct as much as $10,000 in state and local taxes.

The election, she said, is a clear-cut choice between “a person who supports big government and higher taxes ... versus someone who champions lower taxes and limited government.”

But for Dennis O’Connor, a real estate agent in Mission Viejo, it’s a choice between a representative who promises to rein in Trump versus an incumbent “not holding him accountable for extremely bad behavior.”

“When Mimi was in Sacramento, she did an outstanding job,” said O’Connor, 67, a registered nonpartisan who voted for Walters when she served in the Legislature and twice more when she ran for Congress. But now, he said, “She doesn’t represent Orange County anymore. She’s jumping at whatever bad idea Paul Ryan puts out that week.” Ryan is the GOP House speaker.

Perspective matters. The way voters see the election — as a referendum on Trump or a clash between distinctly differing candidates — could well decide not just who wins here in Irvine but which party controls the House after Nov. 6.