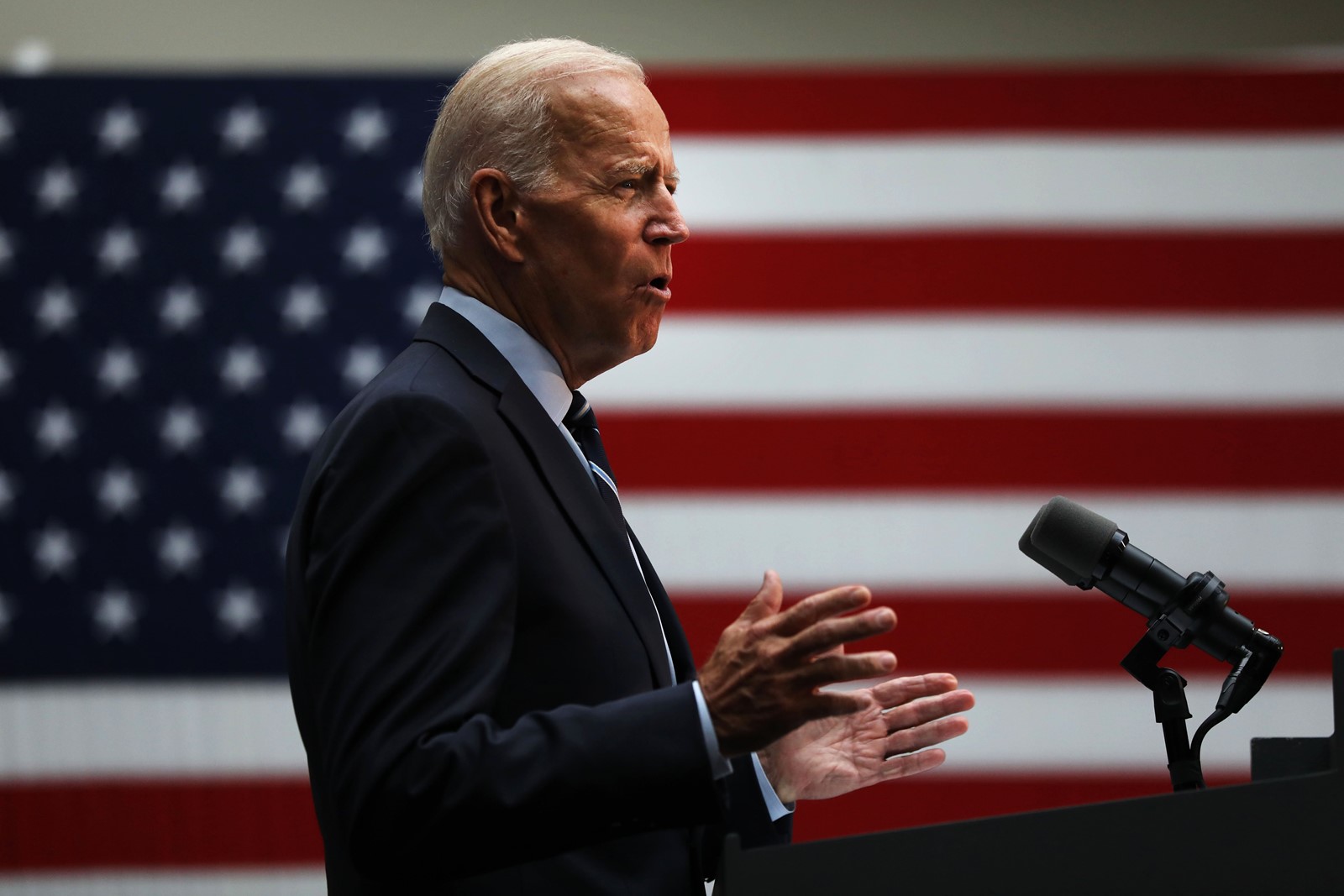 HOPING TO REFOCUS his presidential campaign, Joe Biden emphasized his foreign policy experience during a speech in New York on Thursday. “I have worked on these issues my entire career,” he declared. “I understand what is at stake. I understand the consequences.” (Spencer Platt Getty Images)
PREVIOUS IMAGE

Joe Biden moved to get his presidential campaign back on track Thursday by highlighting an advantage he had over the rest of the Democratic field — experience in foreign affairs — declaring himself the candidate best qualified to restore America’s place on the world stage and end the diplomatic tumult created by the Trump administration.

In an address at the City University of New York, Biden presented a blueprint for world leadership that rejected the alliances the Trump administration had built with autocrats and would restore U.S. relations with European countries and other major democracies.

“No army on Earth can match the electric idea of liberty,” Biden said. “We must once more harness that power and rally the free world to meet the challenges facing us today. It falls to the USA to lead the way. No other nation has the capacity to do it. No other nation was built on that ideal, that promise alone.”

The vision offered by Biden is similar to that of several of his rivals in the Democratic primary, but the former vice president used the speech as an opportunity to remind voters of his deep experience in world diplomacy. Biden’s supporters make the case that he is far better positioned to quickly reshuffle the world order to its pre-Trump state than other candidates in the race.

Biden took aim at President Trump throughout the speech, warning of lasting damage America and its allies will suffer if the nation continues a course of tearing up international agreements like the Paris agreement on climate change and the Iran nuclear deal, and appeasing autocrats.

“He undermines our democratic alliances while embracing dictators who appeal to his vanity,” Biden said of Trump.

“And make no mistake about it, the world sees Trump for what he is: insincere, ill-informed and impulsive, and at times corrupt. It’s why we’ve seen such a drop in how the rest of the world sees the United States of America.”

Biden added: “If we give Donald Trump four more years, we will have a great deal of difficulty ever recovering America’s standing in the world and our capacity to bring nations together.”

Biden spoke at length about the Iran deal that was negotiated during the Obama administration, promising that he would rejoin and strengthen it.

“Trump cast it aside, prompting Iran to restart its nuclear program, become more provocative,” Biden said. “We have to prove again America says what it means and means what it says. Trump has made the prospect of nuclear proliferation, a new nuclear arms race and even the use of nuclear weapons more likely, not less.

“I have worked on these issues my entire career,” he declared. “I understand what is at stake. I understand the consequences.”

The speech came as Biden’s momentum in the presidential race has slowed. Any perception that his lead in the polls might be insurmountable dissolved following his poor performance at the Democratic debates last month, when he strained to coherently and convincingly explain his long-standing opposition to desegregating schools through mandatory busing.

Since the debate, Biden has struggled to regain his footing.

In the speech, Biden laid out specific plans for realigning America’s international relations. They included organizing an immediate summit of democratic nations aimed at renewing the U.S. commitment to the “free world,” as well as restoring daily White House press briefings to signal a commitment to democratic principles.

He said restoring America’s “moral leadership” required immediately ending the Trump immigration policies, which all the candidates running for the Democratic nomination have vowed to scrap.

As other candidates have laid out plans to slow the surge of migrants at the border by investing in and building partnerships with Central American nations, Biden reminded listeners that during the Obama administration, he helped lead an initiative that was doing that.

“It was working,” he said. “Security improved. Migrant flows began to decrease in countries like El Salvador. But Trump announced the end of our aid to Central America via tweet, with no understanding of the consequences. If elected president, I will relaunch that initiative.”

Climate action, an issue that has galvanized Democrats in recent years as Trump tore up international agreements and rolled back Obama-era environmental policies, was also a focal point of Biden’s address.

Biden renewed his commitment to bring the nation to net-zero emissions by 2050, rejoin the Paris agreement and push other nations to make ambitious pledges for climate action.

“We’ve always been a nation that chooses science over fiction,” he said. “We are going to return facts to our policymaking.”