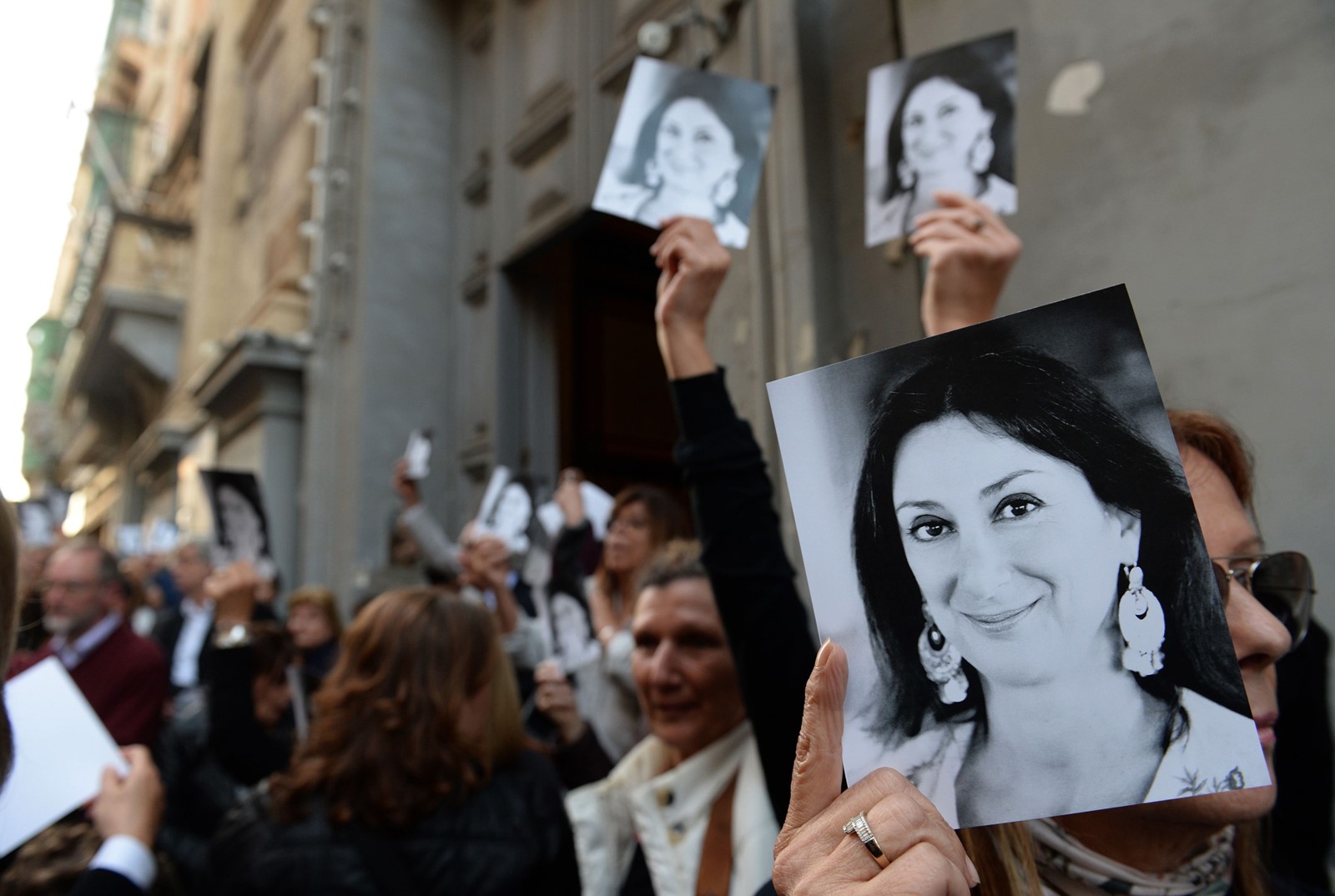 INVESTIGATIVE JOURNALIST Daphne Caruana Galizia of Malta was one of 90 journalists killed over their work in 2017. (Matthew Mirabelli AFP/Getty Images)
PREVIOUS IMAGE

allegation that Saudi journalist Jamal Khashoggi was tortured, killed and dismembered inside Saudi Arabia’s consulate in Istanbul did something unusual: It shocked the global conscience.

That wasn’t the case for other foreign journalists killed in the last year. Not Indian television reporter Sandeep Sharma, killed when a truck rammed into him in March. Not Hector Gonzalez Antonio, a Mexican journalist whose bludgeoned corpse turned up on a dirt road in May. Not Maltese investigative reporter Daphne Caruana Galizia, who died in a car bombing one year ago. Not for more than 40 others just so far this year.

The furor over Khashoggi’s fate is striking given this backdrop. It’s broken through as a major news story even as authoritarian regimes are increasingly indifferent to criticism on human rights. Western governments are less and less willing to raise such issues, which might distract from their trade or security objectives. Shaming by human rights organizations, foreign officials and the media — the traditional tactics for defending the lives of journalists and dissidents — has lost much of its potency.

Even the heart-rending individual cases that historically put a face to human rights abuses and kindled global outrage seem scarcely to register amid the distractions of our rapid-fire news cycle. Chinese Nobel Peace Prize laureate Liu Xiaobo was diagnosed with liver cancer while serving an 11-year prison sentence for penning a pro-democracy charter. Prohibited from traveling abroad for potentially lifesaving treatment, he died in July 2017. Not even the Nobel Prize was enough to render his health crisis a notable international cause.

Oleg Sentsov, a writer and filmmaker from Crimea imprisoned in Siberia, mounted a four-month hunger strike this summer to protest the dozens of Ukrainians being held by Russia as political prisoners. Sentsov’s case was not even mentioned when President Trump met with Russian President Vladimir Putin in Helsinki, Finland, three months ago.

Khashoggi’s case, by contrast, sparked an extraordinary global uproar. It attracted international headlines, threats of economic sanctions, swift bipartisan action by Congress to penalize the alleged perpetrators, and a boycott of a high-profile Saudi investment conference. The chorus of disgust even prompted Trump, who was at first clear he’d prioritize U.S. weapon sales to Saudi Arabia over any retribution, to waffle and weave. He simultaneously dispatched the secretary of State to meet with Saudi King Salman, and also mused that Khashoggi’s disappearance inside the diplomatic compound might somehow be the work of “rogue killers.”

Several factors account for the Khashoggi clamor. He was a contributor to the Washington Post and the newspaper has put its full weight behind covering the case since his disappearance Oct. 2. The revelations also laid bare how tech moguls, media personalities and Trump consigliere Jared Kushner have courted Saudi Crown Prince Mohammed bin Salman, naïvely imagining that the young royal would prove a reformer. That backdrop made the allegedly state-ordered assassination not only brazen and brutal, but also an embarrassing betrayal for prominent elites.

Above all, though, the global convulsion over Khashoggi stems from the lurid spectacle: his being lured to the consulate the day before his planned marriage, the Saudi agents landing in private jets, one allegedly carrying a medical bone saw.

Will the fury over Khashoggi’s fate melt into indifference? The prospect that the Trump administration will reshape the U.S.-Saudi relationship in a gesture of protest on behalf of human rights seems far-fetched. In his own umbrage over Khashoggi’s disappearance, Turkish President Recep Tayyip Erdogan would have the world overlook his own track record as the world’s foremost jailer of journalists. His government has used false charges of terrorism to justify prosecuting reporters and editors to put Turkey’s once relatively independent news media under Erdogan’s firm thumb.

Meanwhile the Saudis will wake up to what fellow authoritarian regimes learned long ago: that even a modest veneer of legality — a show trial, some formal charges — or a modicum of distance from any accused killers can enable them to crush their critics without much fear of consequence. The relentless swirl of the news cycle means that Khashoggi won’t remain on the home screen forever.

Khashoggi’s disappearance has prompted people of conscience in capitals, newsrooms and corporate boardrooms around the world to wonder what we have come to. Yet if this tragedy is to prompt a true reckoning, it must encompass not just this singular alleged act of savagery but a much wider, accelerating pattern of intimidation, suppression and abuse of those who dare to dissent, of which the Saudi journalist is but one victim.