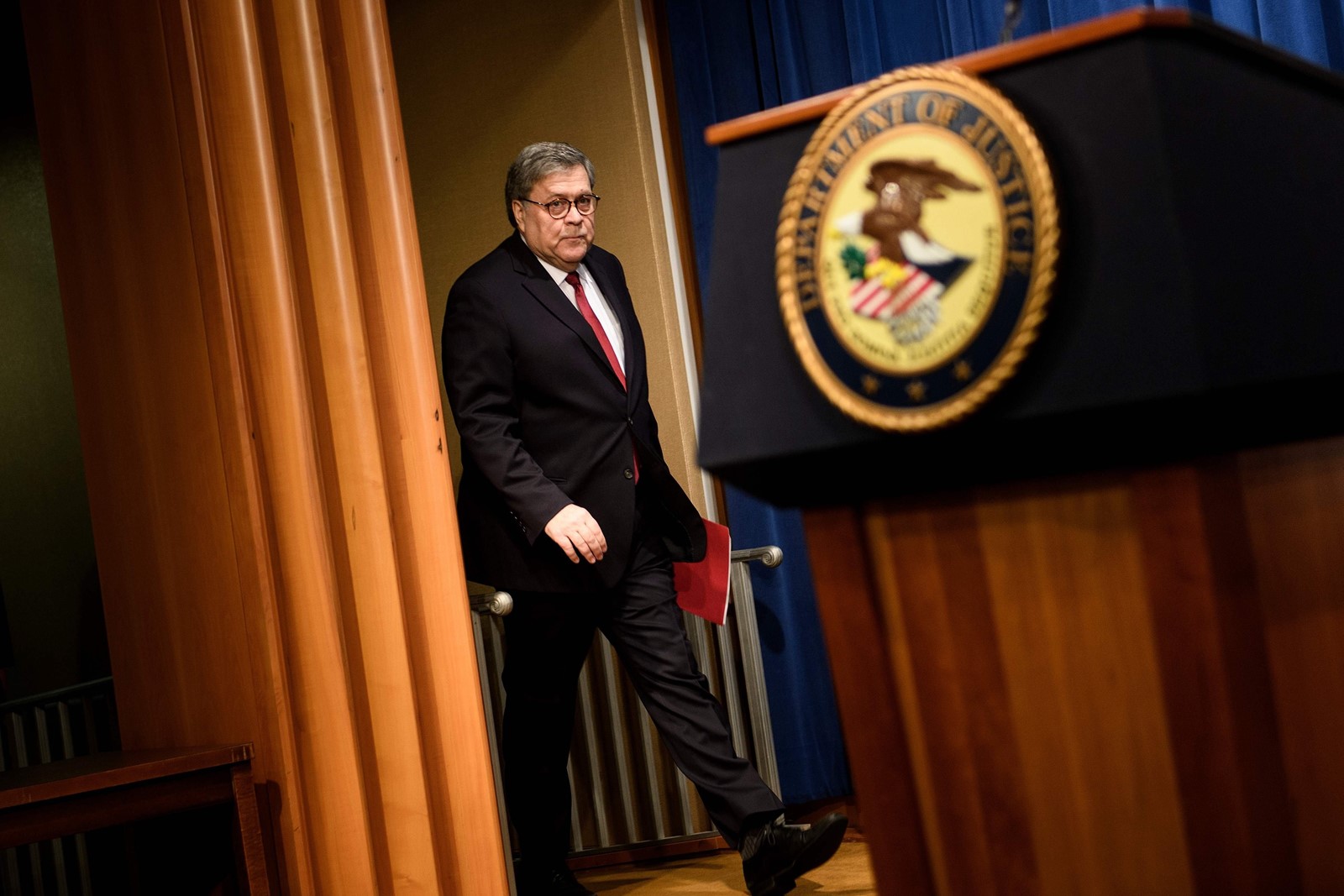 DEMOCRATS will get the chance this week to question Atty. Gen. William Barr since his repeated declarations that the Mueller report had found no “collusion.” (Brendan Smialowski AFP/Getty Images)
PREVIOUS IMAGE

Long known as a law-and-order prosecutor, Atty. Gen. William Barr is under fire from critics who say he acted more as a partisan advocate for President Trump than an impartial law enforcement officer when he released the special counsel report into Russia’s interference in the 2016 election.

In scheduled back-to-back congressional hearings this week, Democrats will have their first chance to grill Barr since he stood at the Justice Department podium on April 18 and repeatedly declared that special counsel Robert S. Mueller III had found no “collusion” between Trump and the Kremlin-backed operation.

Trump has relentlessly made that claim in tweets and speeches, although Mueller’s report avoided using the term “collusion,” explaining that it is not a crime or even a term recognized in federal law.

Two weeks earlier, Barr also went further than Mueller in a letter to Congress by saying Trump hadn’t obstructed justice by attempting to interfere with the investigation. In fact, Mueller did not make a recommendation on the issue, saying it was up to Congress to act or for prosecutors to consider after Trump leaves office.

Democrats and former prosecutors also are baffled by Barr’s recent description of court-authorized eavesdropping in 2016 as “spying,” the politically loaded term Trump uses to criticize the Justice Department and the Obama administration.

“It permanently tarnishes his reputation,” said Rep. Gerald E. Connolly (D-Va.), a member of the House Oversight Committee. “I’m not sure why somebody wants to do this after a long career.”

Rep. Jamie Raskin (D-Md.), a member of the House Judiciary Committee, questioned whether Barr had secretly “signed on as a paid federal public defender for President Trump.”

Barr has not withdrawn, but aides said he might not attend because the panel’s leadership wants to allow committee lawyers to do some of the questioning, rather than just lawmakers.

“Our position is that it’s a congressional hearing, therefore members do the questioning,” a Justice Department official, who was not authorized to speak publicly about ongoing negotiations over Barr’s appearance, said Sunday.

“The witness is not going to tell the committee how to conduct its hearing, period,” said Rep. Jerrold Nadler (D-N.Y.), the panel’s chairman.

Republicans have praised Barr’s handling of the special counsel investigation and defended his summary of Mueller’s report as fair.

Barr should be commended for “his commitment to transparency and keeping the American people informed, consistent with the law and our national security interests,” Sen. Lindsey Graham (R-S.C.), chairman of the Senate Judiciary Committee, said in a statement.

Deputy Atty. Gen. Rod Rosenstein, who appointed Mueller and supervised his work, praised Barr as “a brilliant and principled conservative lawyer” in a Time magazine essay.

“With Bill Barr at the helm,” Rosenstein wrote, “the rule of law is secure.”

Barr has thus found himself at the crux of a divisive political battle as Democrats and Republicans seek to capitalize on Mueller’s report.

Trump has defended his actions in a torrent of tweets. After initially claiming Mueller’s report offered a “total exoneration,” he reversed course the next day and denounced it as “total bullshit” prepared by “Angry Dems” and “Trump haters.”

The 22-month investigation “did not establish that members of the Trump Campaign conspired or coordinated with the Russian government in its election interference activities,” Mueller wrote, though he noted those campaign officials expected to benefit from Moscow’s assistance.

Mueller, a Republican and former FBI director, also wrote that his team found “substantial evidence” that Trump took actions intended to thwart the investigation. “While this report does not conclude that the President committed a crime, it also does not exonerate him,” he wrote.

In his news conference before releasing the report, Barr said Trump’s actions should be viewed in “context.” He said Trump had sought to influence the investigation because it was interfering with his duties as president, not because he wanted to disrupt its course.

“There is substantial evidence to show that the president was frustrated and angered by a sincere belief that the investigation was undermining his presidency,” Barr said.

Barr also appeared to mischaracterize Mueller’s rationale for not reaching a determination on whether Trump had obstructed justice, a crime.

He said a long-standing Justice Department legal opinion that a president could not be indicted while in office did not weigh heavily in Mueller’s analysis. He also said Mueller did not leave it to Congress to decide whether Trump tried to thwart the investigation.

In his report, however, Mueller prominently cited restrictions from that legal opinion and said Congress could determine whether Trump was culpable as part of “our constitutional system of checks and balances and the principle that no person is above the law.”

“He seemed to take on a role of a publicist for the president instead of the attorney general,” said Steven Levin, a former federal prosecutor. “He certainly engaged in spin.”

Jonathan Turley, a George Washington University Law professor and a friend of Barr’s, said the attorney general erred in seeming to defend Trump’s behavior. “His comments seemed more analytical than descriptive,” he wrote in an email.

Turley added that Barr fulfilled “his pledge to release as much as he could in the report.” About 12% of the 448-page report was redacted to protect grand jury testimony, ongoing investigations and other protected material.

Barr also has come under fire for his description of court-authorized surveillance on Carter Page, a former Trump campaign advisor, in the summer and fall of 2016. The warrant was repeatedly approved by federal judges. Trump and his backers have accused the FBI, Justice Department and Obama administration of illegal spying.

Barr echoed that charge before the Senate Appropriations Committee on April 10, saying he thought “spying on a political campaign is a big deal” before adding that he believed such “spying did occur.”

The Justice Department’s inspector general is investigating the genesis of the Russia investigation and the FBI’s surveillance activities. It should conclude its probe in May or June, Barr has said.