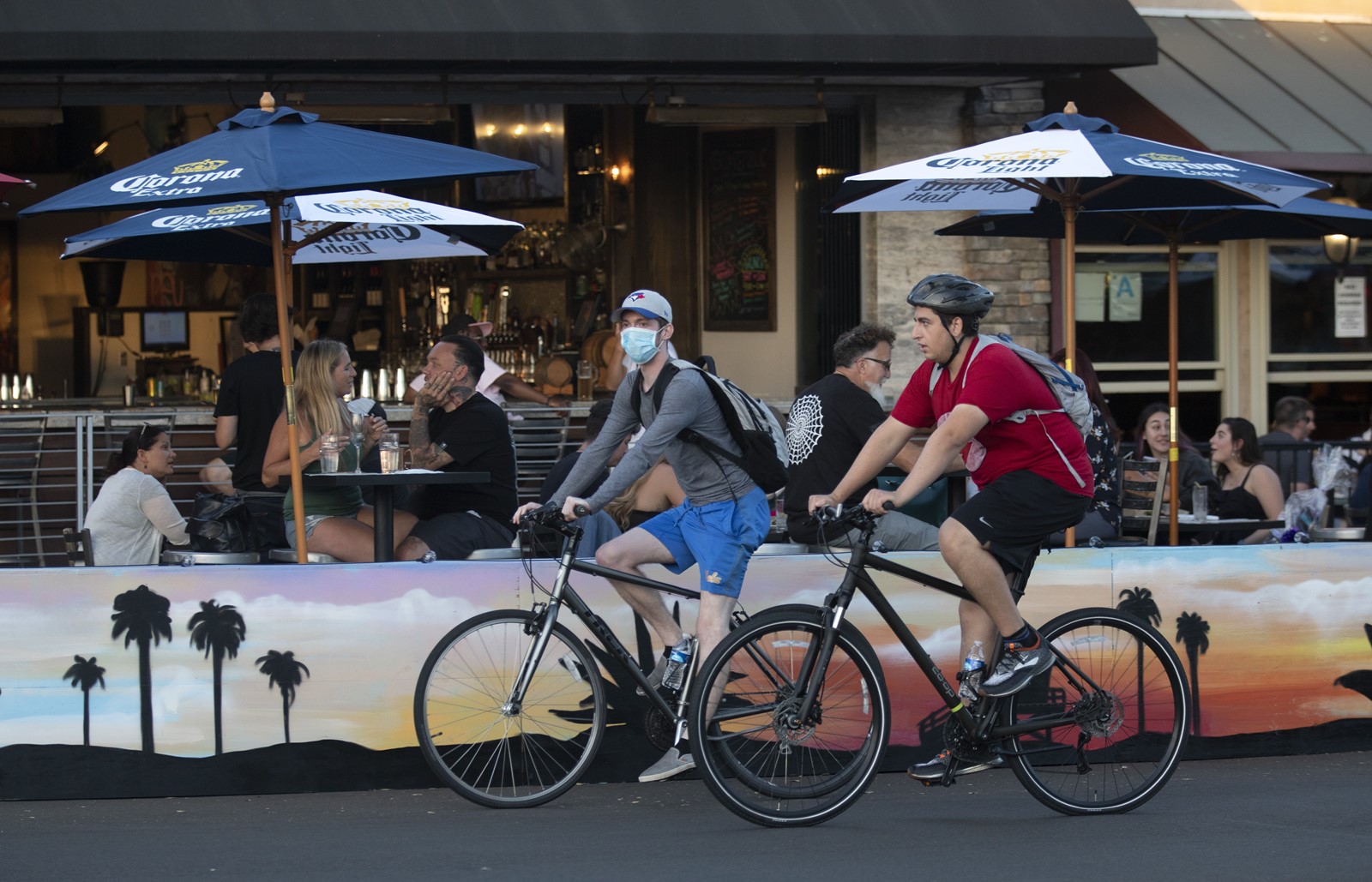 Officials plan to see how it goes over the weekend to determine how many of them will be needed moving forward and for how long.

The contract employees are not sworn members of the Police Department and do not have the authority to make arrests, only to enforce certain rules and administrative regulations, LeBaron said. They will be focused exclusively on ensuring that people in the South Bay city are wearing face coverings.

The goal is to free up police officers to deal with critical public safety issues, LeBaron said.

“The reality is that police not only in Hermosa Beach but throughout Southern California are dealing with public safety every single moment of every single day,” he said. “So trying to add the enforcement of social distancing and face masks makes it very difficult for our officers to be effective in anything they’re doing.”

Between July 30 and Aug. 3, the Police Department fielded 299 calls for service, prepared 34 reports and made 14 arrests on charges that included narcotics offenses and the possession of a stolen bicycle, the city said in a news release.

The workload tends to spike in the summer because of the large numbers of visitors that pour into the city of fewer than 20,000 residents, officials said.

“We could not be more densely populated and densely packed, especially on weekends,” Hermosa Beach Mayor Mary Campbell said. “We have, as a beach town, thousands of visitors who come, and so our ordinance is focused on our public spaces where physical distancing is not reliably possible.”

The ordinance passed July 28 requires that people wear face coverings downtown and at Pier Plaza, the Strand, the Greenbelt, city parks and beaches.

Those who don’t comply face a fine of $100 for the first offense, $200 for the second and $500 for each subsequent offense within a one-year period.

The action was taken in response to pressure from Hermosa Beach residents, who were alarmed at the lack of enforcement of public health orders, especially in popular public areas, Campbell said. The idea was to put some teeth into rules requiring face coverings that were previously imposed in both Los Angeles County and statewide.

Manhattan Beach, which adopted its ordinance about three weeks ago, has also outsourced enforcement in a bid to alleviate the burden on its Police Department. Private security firm Contemporary Services Corp. is providing guards who issue warnings and hand out masks, and Willdan is providing personnel who have the legal authority to write citations, Mayor Richard Montgomery said.

“You can’t have that many police out there doing this. It takes away from normal police duties,” he said. “You want police duties to stay police duties and this to be third-party contracted enforcement. They don’t carry guns, just a ticket book.”

He estimated there were a total of eight contractors from the two firms that rotate through different parts of the city a couple of times during the week, as well as on weekends. They work in teams, with the CSC guards offering people face coverings, and the Willdan officers writing citations if people don’t comply, he said.

“Only the people that are really adamant about refusing to wear any kind of face covering, period, actually get a citation,” he said.

As of last Sunday, he said, the teams had written 226 citations, given 1,657 warnings to people wearing face coverings incorrectly and handed out hundreds of disposable face masks to those who didn’t have them.

“And if you ask our residents, businesses downtown, anyone at the parks, we have seen a dramatic increase in compliance,” Montgomery said.

He said the cost of the extra staffing could eventually be reimbursed by the Federal Emergency Management Agency and the state, since it is a COVID-19-related expense, but that won’t happen for a long time. In the meantime, the city is footing the bill, he said.

Saturday did not mark the first time Hermosa Beach had contracted with a private firm to deal with staffing issues created by the pandemic. The city worked with a different company to add security guards to enforce the hard beach closures that were put in place in late March, Campbell said.

“This is at the expense of the city, obviously. We don’t do it lightly,” she said. “We’ve taken a huge hit, as every city has, as every business has, virtually, around budget. But we’re also currently still in the situation, especially in L.A. County, where COVID-19 remains a very big concern and a threat to public health.”

Hermosa Beach’s health ordinance enforcement officers will be clearly identifiable, with reflective vests and ID badges, and will also have disposable masks to hand out, officials said.

As in Manhattan Beach, their chief objective is to educate people about the rules and serve as a deterrent.

“Part of what they’re doing is also high-visibility, high-profile, making sure people know that the rules are face coverings must be worn in specific areas of the city,” LeBaron said. “And so if we can gain compliance through that visibility, that is our No. 1 objective. Citations will be our last resort for people who just don’t want to obey the rules that are set in place.”