Republican winner in Colorado primary is latest to dabble in fringe QAnon theory. 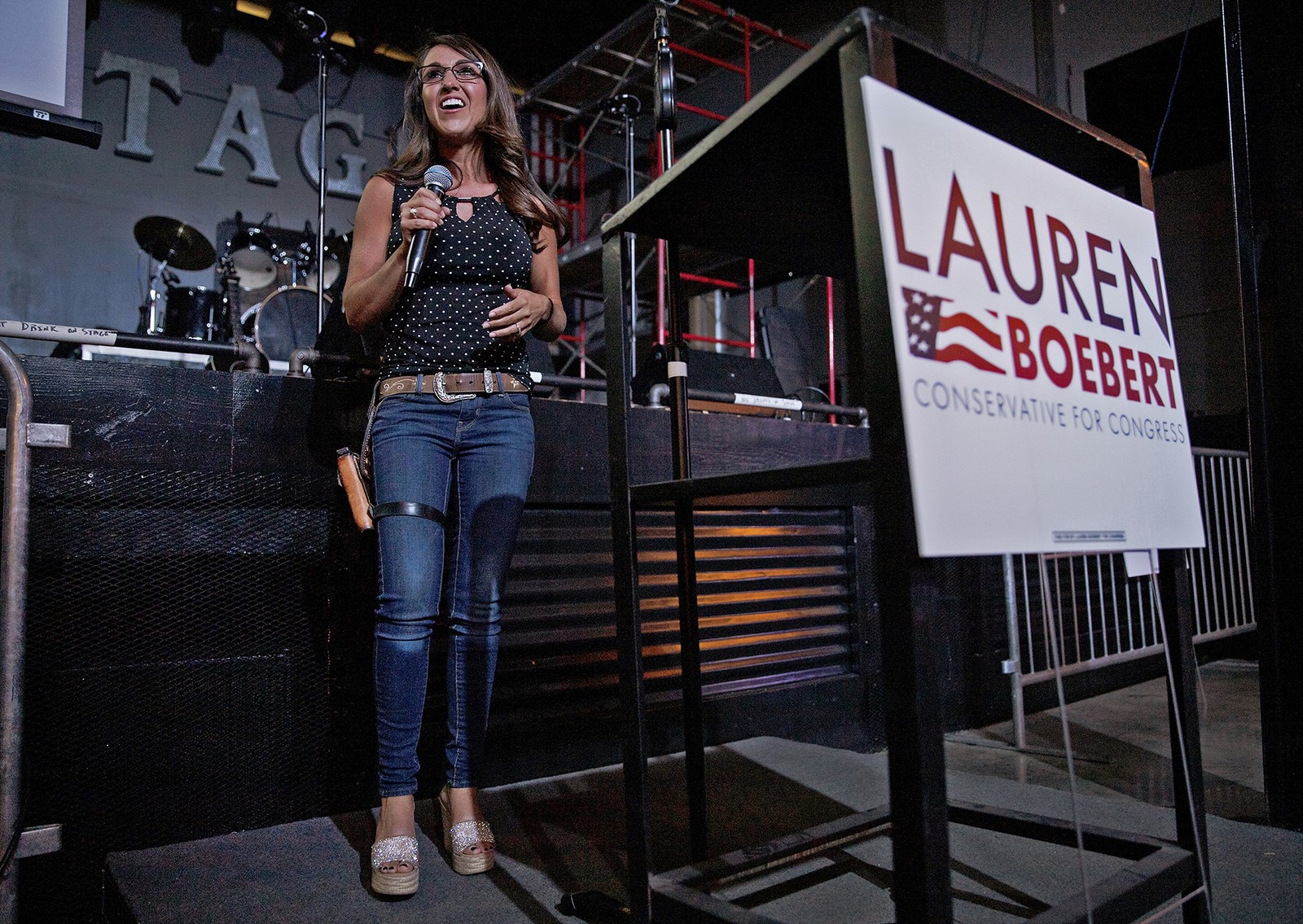 When Lauren Boebert was asked in May about QAnon, she didn’t shy away from the far-right conspiracy theory, which advances unproven allegations about a so-called deep state plot against President Trump that involves satanism and child sex trafficking.

“Everything that I’ve heard of Q, I hope that this is real because it only means that America is getting stronger and better, and people are returning to conservative values,” she said.

At the time, Boebert was on the political fringe, running a campaign largely focused on her gun-themed restaurant and resistance to coronavirus lockdowns. She is now on a path to becoming a member of Congress after upsetting five-term Rep. Scott Tipton in Tuesday’s Republican primary. The GOP-leaning 3rd Congressional District in rural western Colorado will probably support the party’s nominee in the November general election.

Boebert is part of a small but growing list of Republican candidates who have in some way expressed support for QAnon. They include Marjorie Taylor Greene, who is advancing to a runoff for a congressional seat in a GOP-dominated Georgia district, and Jo Rae Perkins, the party’s Senate nominee in Oregon.

The trend pales in comparison with previous movements that have swept Capitol Hill, such as the 2010 tea party wave. But at a time when the GOP is facing steep head winds among women and in the suburbs, the QAnon candidates could bring extra headaches.

“The more times you have candidates who are crazy, the more it hurts your brand,” said John Feehery, a Republican consultant and former House leadership aide. “The trick is for Republicans to embrace the antiestablishment mood without embracing the crazy.”

Republican leaders have distanced themselves from some candidates, such as Greene. But now that Boebert is the nominee in Colorado, the GOP made clear Wednesday that it would support her.

“Lauren won her primary fair and square and has our support,” Minnesota Rep. Tom Emmer, the chair of the House Republican campaign arm, said in a statement.

Boebert’s campaign manager, Sherronna Bishop, said the campaign was ignoring the headlines tying the candidate to the QAnon conspiracy.

“We know exactly what we’re about and that’s the Constitution and freedom,” Bishop said. “We are not into conspiracy theories.”

She said Boebert was not available for an interview until Sunday because she is traveling to South Dakota for a Bikers for Trump event near Trump’s Independence Day rally at Mt. Rushmore.

The QAnon theory has ricocheted around the darker corners of the internet since late 2017. It is centered on an anonymous, high-ranking government official known as “Q” who purportedly tears back the veil on the “deep state,” often tied to satanism, child molestation and even cannibalism.

Trump has retweeted QAnon-promoting accounts. Followers flock to his rallies wearing clothes and hats with QAnon symbols and slogans.

Republican voters may not know the details of the theory, but they’ve become more amenable to the notion of conspiracies because Trump exploited them during his campaign and administration, said Joseph Uscinski, a political scientist at the University of Miami who studies conspiracy theories.

“Just as that worked for him, there are going to be copycats too,” he said.

Uscinski emphasized that Democrats also believe in conspiracy theories — he cited Vermont Sen. Bernie Sanders’ insistence that the 1% run politics and that his 2016 losses in Democratic presidential primaries showed the system was “rigged.”

Uscinski noted there’s nothing in the QAnon theory that’s inherently conservative, and Boebert was nowhere near as enthusiastic about it as other candidates.

For example, Perkins, the GOP’s Senate nominee in Oregon, repeated the QAnon oath in a recent video. She took down a video backing the movement, then said she had been duped by her own campaign staff and supported it again.

Still, Perkins has almost no chance in reliably Democratic Oregon. Boebert is running in a seat that leans Republican and stands the best chance of any of the candidates who have flirted with QAnon to end up in Congress.

“I shouldn’t have to guess if my congressperson believes in satanic, baby-eating child molesters,” Uscinski said.

Boebert owns Shooters Grill, a restaurant where servers carry handguns in the aptly named western Colorado town of Rifle. She ended up on Fox News after confronting Democratic presidential hopeful Beto O’Rourke in a Denver suburb last year over his plans to confiscate assault-style rifles.

Boebert’s sole known comments on QAnon came during a May interview with internet journalist Ann Vandersteel, whose site highlights other conspiracy theories. Vandersteel asked Boebert what she thought of “the Q movement.”

Boebert said she knew about it from her mother, who was “a little fringe.” Pressed, she added, “If this is real, it could be really great for our country.”

Some Republican candidates have referred to the conspiracy theory in social media posts but say they’re not believers.

Angela Stanton-King, the GOP’s nominee in Georgia’s solidly Democratic 5th Congressional District, said in a statement that a post linking to a QAnon video on Instagram that begins: “This would explain why they tried so hard to make us hate him ...” was just questioning the movement. She also said that her use of QAnon hashtags in tweets didn’t mean she was an adherent, explaining she peppers her social media with various hashtags to extend her reach.

Meanwhile, in Washington, the defeated Tipton was seen Wednesday sitting alone in the massive Capitol Rotunda. He said his campaign focused on the district’s issues and didn’t attack his opponent.

Asked if, in retrospect, he believed that was a winning tactic, he said: “I don’t know. Maybe we’re in a different world right now.”