Divisiveness helped the president in 2016, but the nation now seems eager to make amends for bigotry. 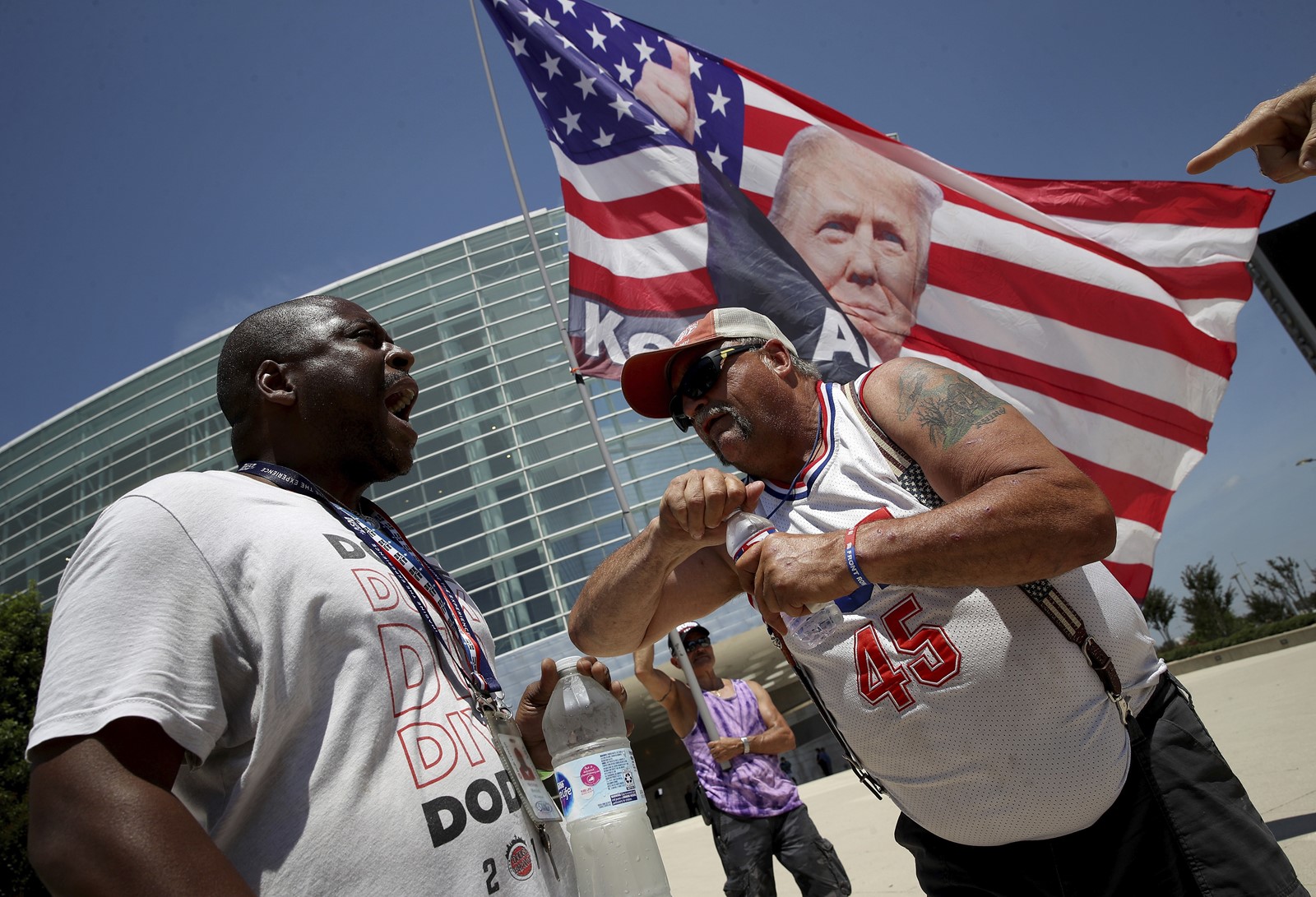 Seemingly every time President Trump speaks about race or what it means to be an American, he sparks outrage.

His purposeful use of divisive and inflammatory language to energize his political base isn’t new in American politics, though.It’s part of a legacy of racism going back to the country’s founding, when the authors of the Constitution gave slaveholders immense political power while allowing them to treat enslaved Africans as less than human.

“It taps into this racial resentment toward Black people that is deep-seated,” said Pearl Dowe, a professor of political science and African American studies at Emory University in Atlanta. “Politicians use it because it works.”

Trump’s tactics served him well in 2016, but they feel out of step in an election year that has seen a dramatic shift in the public’s attitudes about race.

In the aftermath of the killing of George Floyd and protests against police brutality that have spread to all 50 states, Americans of various backgrounds, including many white people who live in conservative strongholds, seem eager to make amends for the bigotry and injustice the country has inflicted on Black people.

Russell Riley, a historian at the University of Virginia in Charlottesville, said that since the civil rights struggles of the 1960s and ’70s, Americans have come to expect something different from what Trump has offered so far — at the very least, a show of common cause with those demonstrating for racial progress.

“When Lyndon Johnson — a Texan — went before Congress and said, ‘We shall overcome,’ that changed the job description of every president since,” said Riley, who co-chairs the Miller Center Presidential Oral History Program. “Even with Nixon and Reagan, who trafficked in the seamier side of politics, there was some acknowledgment of the need for racial equality.”

Trump’s combativeness comes off as extreme and retrograde by comparison — whether he’s portraying Black Lives Matter activists as hellbent on “ending America,” summoning federal agents to face off with protesters or retweeting a video showing one of his supporters shouting “white power.”

And yet he rejects any notion that he’s fanning old racial hatred.

To understand this disconnect, Trump’s critics should know that he and many other Americans hold a competing view of the country, said Spencer Critchley, former communications consultant for Barack Obama.

They simply don’t see America as inherently unfair and racist, Critchley said. They believe the U.S. possesses a distinct identity and noble traditions that must be fiercely defended, not challenged.

Given that outlook, no one should be surprised that Trump — who launched his 2016 campaign by disparaging Mexicans as rapists and murders, called NFL players who kneeled during the national anthem “sons of bitches” and refers to COVID-19 as the “Kung Flu” — resorts to the same formula of crude references and bigoted slights that helped previous presidential candidates curry favor with white voters, Critchley said.

“There’s this overlap between ethnic nationalism and racism,” said Critchley, author of the new book “Patriot of Two Nations: Why Trump Was Inevitable and What Happens Next.” “It’s built into the foundation of the country, but he does have an instinctual sense of how to exploit it.”

What Trump fails to take seriously enough, Critchley said, is that successive generations of Americans have been denied the privileges and opportunities that make the country special. They love the country too, but they’ve been tormented by it instead of embraced.

In the 1960s, TV viewers watched in horroras footage showed violence against Black demonstrators: the late Georgia Rep. John Lewis and other activists in the South being beaten and attacked with water canons, police clashing with Black people during uprisings in Detroit and Newark and Watts.

They saw the hurt and anguish in the eyes of Black Americans who poured into the streets after the assassination of Martin Luther King Jr.

Even though Black Americans won the basic right to vote, to sit at lunch counters next to white patrons and send their children to integrated schools, racism lived on.

Richard Nixon ran that same year by appealing to the “silent majority” of conservative whites who felt threatened by social change and promised to respond to civil unrest with “law and order.”

A generation later, Ronald Reagan chose the Neshoba County Fair outside Philadelphia, Miss., to launch his 1980 general election campaign and tout “states’ rights,” a phrase that was popular with opponents of federal civil rights legislation. The county was the site of the 1964 murders of three voting-rights activists by white supremacists.

Trump’s campaign encompasses all those approaches: He demonizes entire ethnic groups as not fully American, lashes out at protesters and insinuates that white people, not people of color, are the ones most in need of protection.

In recent days, Trump has tried to stoke the fears of suburban white women, telling viewers of a town hall targeting Wisconsin voters that Democrats are planning to “eliminate single-family zoning, bringing who knows into your suburbs, so your communities will be unsafe and your housing values will go down.”

Black Americans are on average three times more likely than whites to be killed by police, according to a Harvard study released in June that analyzed 5,494 police-related deaths between 2013 and 2017. But in a recent CBS News interview, Trump responded to a question about why Black people continue to be killed by the police by distorting the truth: “So are white people,” he said. “More white people.”

He also said that those who fly the Confederate flag, a symbol of hate for many Black people, are celebrating their heritage and practicing their 1st Amendment right to free speech.

“When Donald Trump talks about ‘heritage,’ he means who has the heritage to be an American citizen,” Dowe said.

“He’s deliberately pandered to the idea that America is a nation rooted in white culture and power,” she said. “Others that reside here just reside; they are not due the full rights of citizenship. If others — people of color — stake their rights to citizenship and equality, then the way of life that white people are comfortable with will be no more.”

Democrats have also fostered discord and condoned racial bigotry. Riley noted that Andrew Jackson approved the use of mob violence against Southerners who subscribed to abolitionist literature, citing his belief that anti-slavery activists were trying to incite enslaved Africans to rise up.

For decades, the party tolerated leaders who openly advocated for white supremacy and racial segregation. Woodrow Wilson, who once wrote that Black people were “an ignorant and inferior race,” permitted a screening of “The Birth of a Nation” at the White House, even though it presents Ku Klux Klansmen as heroes.

Both Hillary Clinton and Joe Biden have faced accusations of racism over their support of criminal justice reforms in the 1990s that have contributed to mass incarceration of Americans of color.

Trump, however, is on another level with his defense of Confederate symbols and his casting of protesters as traitors, historians say.

The same us-versus-them mentality and ethnic nationalism were at play when he questioned whether the Hawaii-born Obama, the country’s first black president, was a U.S. citizen.

Riley believes Trump’s insistence on reigniting familiar culture wars to woo voters reveals he has a “tin ear” when it comes to sensing what the country needs at a time of profound distress.

Americans face crisis and uncertainty at every turn — not just the police killings of Blacks and Latinos but the government’s fumbled response to a pandemic that has taken the lives of more than 147,000 Americans and caused swaths of the country to halt their reopening plans, prolonging the worst jobs slump since the Great Depression.

“Maybe he’s going to be headstrong and hidebound, and do whatever he’s going to do,” Riley said, “but he’s failed to understand what can happen when he does these antagonistic things.”

With Trump prodding an already jittery nation with a daily barrage of falsehoods and racist provocations, the country appears to be lurching toward a level of chaos that he won’t be able to manipulate.

Dowe borrowed an expression that her 87-year-old mother, Barbara Ford, relies on for high-anxiety times like these: “Something’s got to give.”

“At some point,” Dowe said, “things that are negative and evil must give way to the truth and what is right.”