While Democrats dominate the run-up to caucuses, president asserts himself at rally. 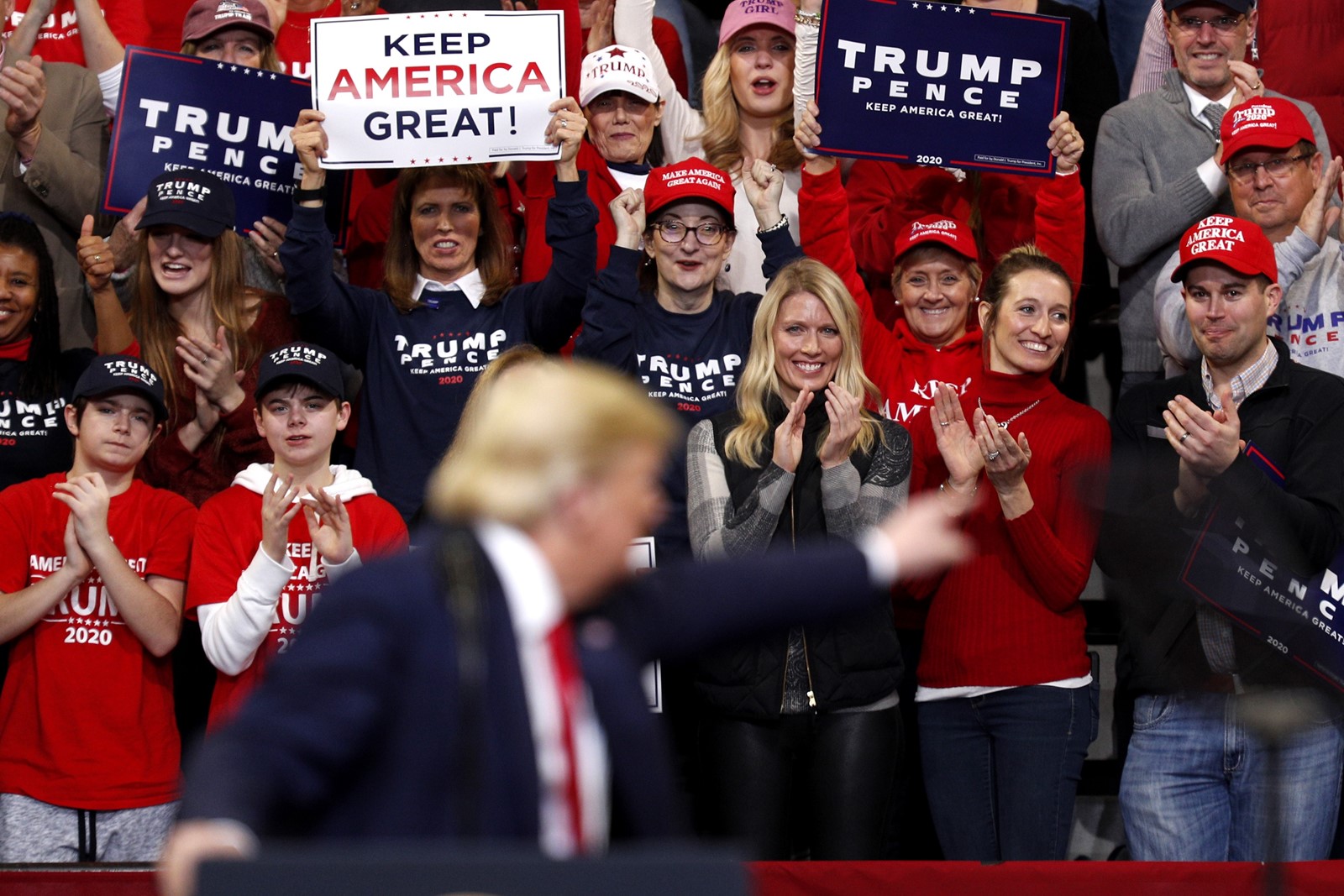 Democrats have dominated the political discourse in Iowa in the lead-up to the caucuses. But President Trump is planning a show of force here on Monday, a reminder that the state that tilted heavily in his favor four years ago could be competitive in November.

Scores of Trump supporters, including two of his sons and several members of his Cabinet, will fan out across Iowa ahead of the first-in-the-nation nominating contest. This comes four days after the president held a rally here, speaking for 90 minutes to thousands of people at Drake University’s basketball arena. Trump warned them that the Democrats’ agenda would upend their lives.

“I could make this speech really short. All I have to do is say, ‘Uh, hello, Iowa. You have no choice but to vote for me. Otherwise everything you have loved in your entire life will be gone,’ ” Trump said. “Instead, I work my ass off up here, OK?”

It was a rare moment of attention paid to the GOP at a time when all the focus has been on the Democrats competing for their party’s presidential nomination. Republicans are caucusing on Monday too, and though former Rep. Joe Walsh and former Massachusetts Gov. William Weld have been campaigning in the state, Trump is a lock to dominate the GOP vote.

The president’s approval rating among Republicans remains strong. A November poll by the Des Moines Register and CNN found that 85% of Republicans who did not plan to attend aDemocratic caucus approved of Trump’s performance in the White House and 76% said they would definitely vote for him in November.

Trump beat Hillary Clinton by more than 9 percentage points in Iowa in 2016. The state is also led by Republican senators and a Republican governor.

But prior to electing Trump, Iowa twice voted to send Barack Obama to the White House. In the 2018 midterm election, two Democratic women beat two Republican incumbent congressmen. And, in a state where the social behavior known as “Iowa nice” is a source of pride, a segment of Republican voters have soured on the president.

Cole Zimmerman, 68, was a lifelong Republican who switched his party registration to Democratic one month ago because, he said, he was so fed up with Trump’s crassness.

“It can’t be Trump, and this is from somebody, I’ve been a Republican for over 40 years,” said the former director of admissions at Simpson College in Indianola. “I have one grandchild and she’s 3 years old, she’s a girl. How can you have any support for a man that you wouldn’t let your wife or your daughter or your granddaughter be in a room by herself with him?”

Democrats are focused on winning back states like Michigan, Wisconsin and Pennsylvania, but voters such as Zimmerman and the party’s congressional successes in 2018 are why they are also eyeing Iowa.

Craig Robinson, a former state GOP official and founder of the Iowa Republican website, said that while Republican voters are largely happy with Trump, the state is in play.

“Iowa’s always competitive,” he said. “You look at these congressional races, that tells me this is still a very purple state. It can shift directions in an election.”

Polling shows that if the election were held today, Trump would beat any of the Democratic front-runners, but the margin is much narrower than in 2016.

Some of the actions Trump has taken have harmed Iowans, notably farmers. One out of every four rows of soybeans grown in Iowa was once bound for China, but Trump’s trade war resulted in that nation enacting steep tariffs on soybeans, driving down crop prices. Federal government waivers of ethanol requirements for scores of fuel producers, including giants such as Chevron, slashed corn prices by more than 10%, according to the Renewable Fuels Assn.

The administration directed billions in subsidies to corn farmers to soften the impact, and the president recently signed a new trade agreement with Mexico and Canada, and the first phase of a trade deal with China — all efforts that he highlighted during his rally.

Tim Hagle, a political science professor at the University of Iowa, said such moves have blunted major revolt among farmers, who are largely Republican and supportive of the president.

“Many farmers were willing to endure a certain amount of short-term pain for what they hope is long-term gain,” he said. “By and large, Trump is pretty popular among Republicans.”