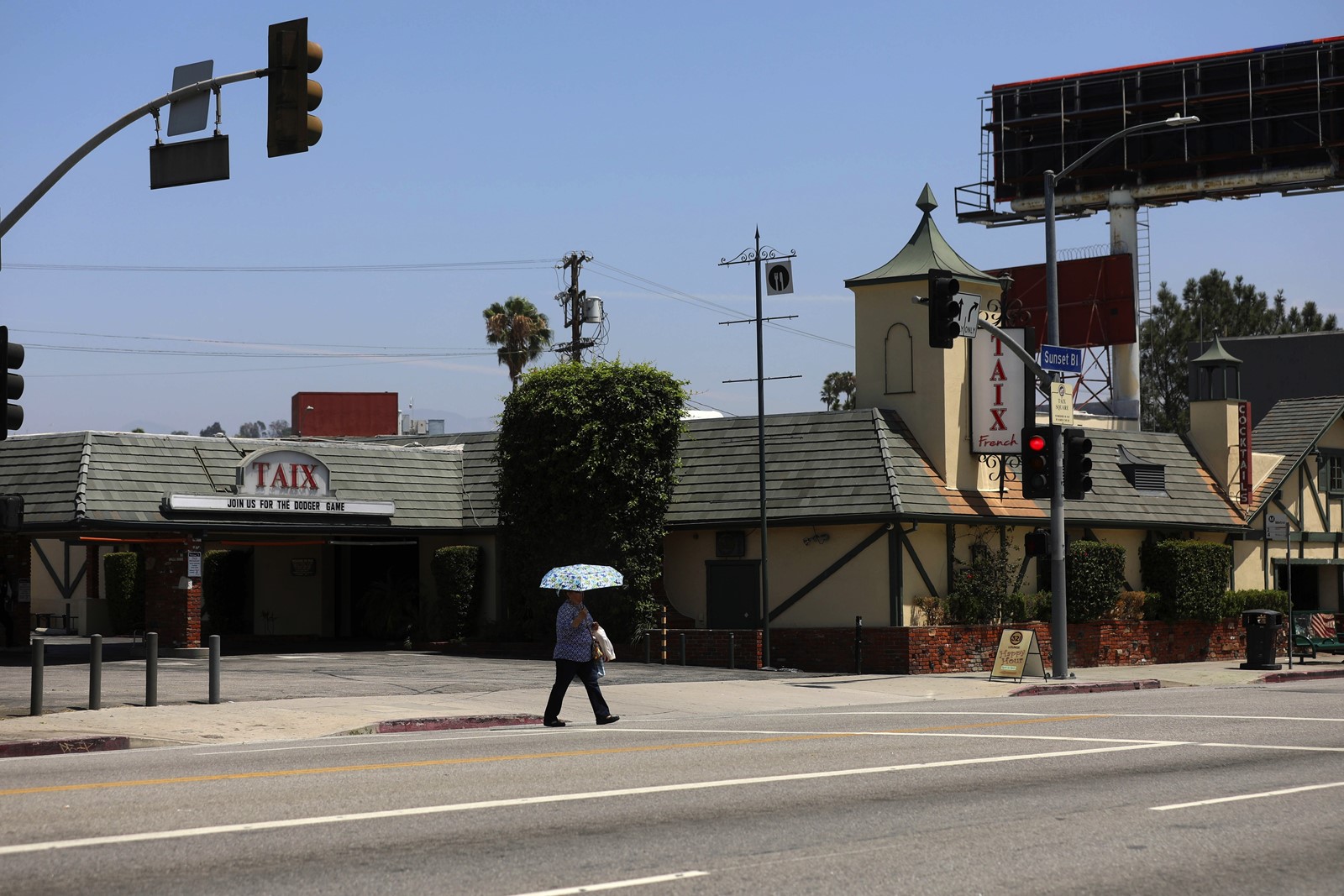 THE TUG OF WAR over Taix French Restaurant in Echo Park has pitted historic preservationists and longtime fans of the establishment against its owner and the developers planning its overhaul. (Gary Coronado Los Angeles Times) 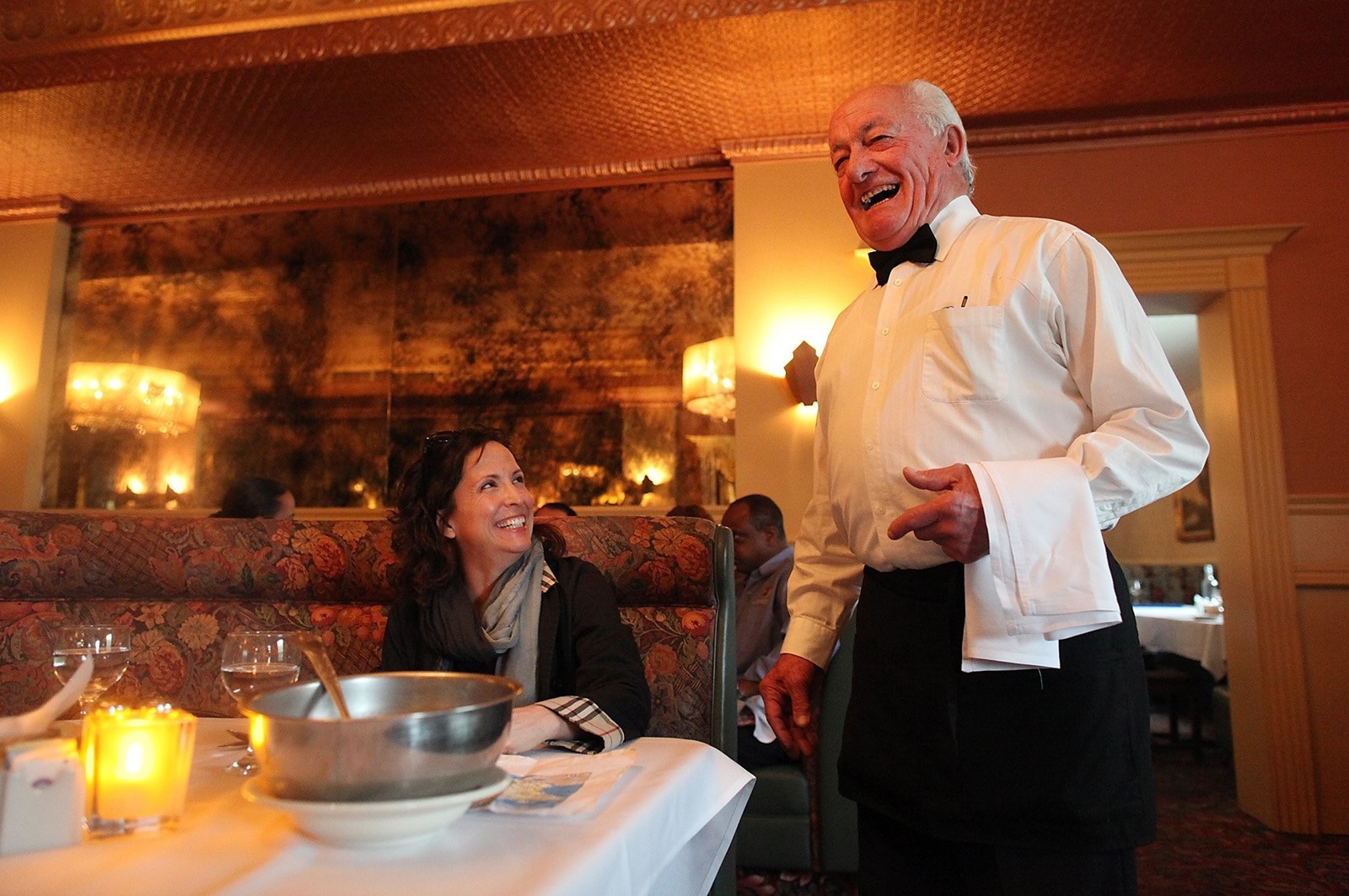 Taix French Restaurant has been an Echo Park standby for decades, an old-school gathering place for cocktails and “country French” cuisine that has seen generations of birthday parties, meetings and gatherings after Dodgers games.

Now, real estate developers are planning a project on its Sunset Boulevard site that would replace its longtime building with a new complex that would rise to six stories and include housing and retail. Holland Partner Group says the new project would house a smaller version of the restaurant, which has been dubbed “New Taix” by its owner.

The plan has set off a debate over whether L.A. should try to protect the building that has been home to Taix for decades — or whether doing so would jeopardize the cherished business itself.

The tug of war over Taix has pitted historic preservationists and longtime fans of the restaurant against its owner and the developers planning its overhaul. In recent weeks, it has drawn a polarizing proposal from Councilman Mitch O’Farrell, which has alarmed critics who say it would undercut L.A.’s whole system of historic protection.

Historic preservationists have called to save the Taix building, urging the city to formally recognize the restaurant as a landmark and to potentially incorporate the structure into the new development. Angelenos have phoned in to city hearings to plead for the building to be saved, recounting treasured memories in its bar, booths and banquet rooms.

“Taix is much more than a menu. It’s the building itself. The building really matters,” said Susan Winsberg, who told city commissioners that she had some of her happiest moments at the restaurant.

“It’s somewhere that you’re going to go, not to just eat — you’re going to go to feel something,” Winsberg said in an interview. “To feel together and feel like you belong, and that the city means something to you other than real estate.”

But the restaurant owner has argued that saving that building could end up hurting his business.

Michael Taix, who has championed the redevelopment plan, told members of the Cultural Heritage Commission that restaurant revenues could not continue to support the overhead at “our mega-sized, grossly energy-inefficient, outdated building.”

The New Taix would retain its beloved feel by installing patinaed mirrors and a faux-tin ceiling and reusing its cherry wood bar and “Cocktails” sign, he wrote. He argued that the city should designate the site — not the building — as historically significant.

“We’re trying to survive,” Taix said in an interview. “People feel like, ‘They’re taking a piece of my Taix away.’ But when did Taix become theirs? Last I checked, I owned it. And I made the changes that kept it surviving through very difficult times.”

The Echo Park Improvement Assn. contended in a letter that enshrining the building as a historic monument would complicate the redevelopment process and could put Taix’s future at risk.

Historic buildings can still be altered and even torn down under Los Angeles city rules, but the requirements allow for more review before that can happen.

Preservationists argued that the developers could still spare the Taix building and incorporate it into the new project.

“Nobody wants another multistory box that looks like it belongs in Irvine,” said Christine Kantner of the Silver Lake Heritage Trust. “If the building was preserved and something was built around it, that would be the draw.”

O’Farrell, who represents the area, has proposed designating the restaurant siteas a monument, but not the building itself. In his modified version of the proposal, O’Farrell specified three features that should be preserved: its cherry wood bar top, a red-and-white “Taix” sign and another advertising “Cocktails.”

At a city hearing, his aide Craig Bullock argued that historic recognition for Taix “should not be an impediment for them to continue their business.” Its “ability to continue to do business, which the Taix family has done for nearly a century, is the primary reason this building has garnered such attention,” Bullock added in a written statement.

The idea put forward by O’Farrell alarmed preservationists, who said it would not only affect the storied restaurant but also the entire system for historic preservation in Los Angeles.

Adrian Scott Fine, senior director of advocacy for the Los Angeles Conservancy, said it would pare back historic protection to “mere building fragments” and set a dangerous precedent.

Fine argued that such a “neutered” form of historic protection could allow developers to try to sidestep the higher degree of environmental review required when demolishing a historic monument, by “calling something a historic cultural monument when it really is only two signs and a bar top.”

Richard Schave, co-founder of the Esotouric tour company, called it a “bait and switch.” O’Farrell is billing his move as recognizing a historic monument, Schave said, but his proposal is “taking away all the power of the nomination.”

Holland Partner Group, which is planning a 74-foot-tall project that would include 170 new housing units and incorporate the new version of Taix at the Echo Park site, said it would be able to move forward with its plans under the O’Farrell proposal. Tom Warren, its executive managing director for Southern California, said the developer is working on “creating a special environment that recognizes how much people care about this location.”

“There was concern about this setting a precedent. We don’t believe it does,” said Warren, who compared it to the way the city had sought, decades ago, to preserve specific aspects of the Original Farmers Market on Fairfax Avenue.

Bullock said that concerns about a risky precedent seemed exaggerated because the Cultural Heritage Commission had not recommended making Taix a monument based on its architectural significance; the commission found it had contributed to social, economic and cultural history. One commissioner compared its French Norman Revival exterior to Disneyland.

Ken Bernstein, who heads L.A.’s historic preservation office, said the commission nomination had nonetheless applied to the building.Fine rejected the comparison to the Farmers Market.

Back then, Fine said, the council had limited the scope of its designation, “but not to the point of it being just architectural salvage placed onto a new structure.”

Holland spent more than $170,000 last year lobbying city agencies and officials over its Sunset Boulevard project, according to city records.

The decision on landmarking Taix is scheduled to be taken up by the councilthis week.

The debate over preserving the Echo Park restaurant is one that Los Angeles has repeatedly grappled with when beloved businesses are in the path of new development.

Even if a building becomes a monument, the city cannot force a particular business to keep operating, raising concerns about whether historic protection could end up preserving an empty shell.

Residents clamored two years ago to save Tom Bergin’s, an Irish bar on Fairfax Avenue, amid concerns that it would be torn down. The city ultimately declared the building a monument but excluded its parking lot so that new development could rise more easily around it — a move that bar owners said would ensure their business could survive.

L.A. has also landmarked a Norms restaurant on La Cienega Boulevard and the closed Johnie’s Coffee Shop on Wilshire Boulevard. Preservationists pulled back, however, on a bid to turn a former warehouse for the gay club Circus Disco into a monument; developers of a new project on the Hollywood site instead agreed to save its fanciful clown entrance and other artifacts.

Los Angeles has lagged behind other cities such as San Francisco that register “legacy businesses,” said Kim Cooper, also of Esotouric. Such businesses could then be eligible for added assistance to help them stay afloat. Two years ago, Councilman Curren Price introduced a motion to explore such a program, but the idea has yet to be worked out.

As the plan to recognize Taix — but not its building — heads to a council vote, fans of the longtime haunt who had campaigned to make it a monument say they are opposing O’Farrell’s amended version of the nomination.

“A real place has these intangible, almost indescribable elements, which have to do with the entire experience of it,” Cooper said. Saving just a few items — yet calling it a landmark — “leaves a really bad taste in my mouth.”