The Cohen case and the Mueller inquiry threaten separately, and perhaps combined 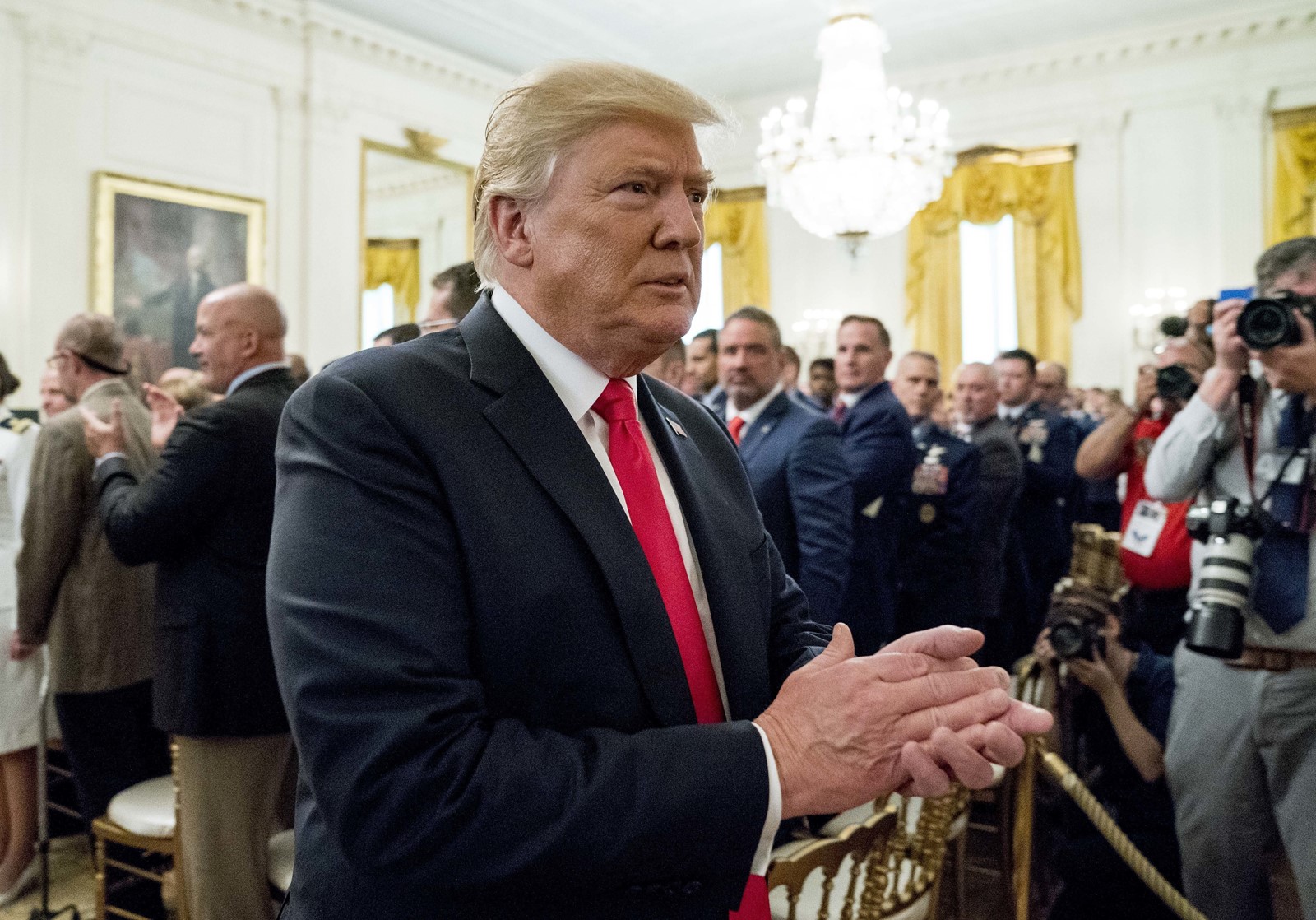 After 19 tumultuous months in office, President Trump is being squeezed by legal assaults on two fronts, each of which could imperil his White House tenure.

The politically charged question of how those cases intersect lies with Michael Cohen, who was Trump’s longtime personal lawyer and confidant in New York — until he became a sworn enemy.

After Cohen pleaded guilty to eight federal charges and directly implicated Trump in campaign finance law violations, his lawyer raised the stakes Wednesday by claiming that Cohen could tell prosecutors about Trump’s knowledge of illegal Russian hacking of Democratic Party computers during the 2016 campaign.

Cohen knows “whether Donald Trump ahead of time knew about the hacking of emails, which is a computer crime that was the subject of the indictment of the 12 Russians,” his lawyer, Lanny Davis, said on CNN. “And we’ll just have to see what Mr. Cohen is able to say from direct knowledge when and if he discusses this with the special counsel.”

It’s not clear how much Cohen can or will help Mueller’s investigation into the Kremlin-backed effort to interfere in the election and whether Trump or his aides conspired with the Russians.

At a White House news briefing on Wednesday, Press Secretary Sarah Huckabee Sanders brushed off a question about whether the president is worried about what Cohen might tell Mueller.

“I don’t think the president is concerned at all,” she said. “He knows that he did nothing wrong, and there was no collusion.”

In the past, however, Trump has erupted in fury at signs that Mueller may be digging into his family business or personal life.

Trump is “at his most vulnerable and tends to respond most volcanically about the period before his presidency,” said Harry Litman, a UCLA and UC San Diego law professor and former federal prosecutor.

After a decade as Trump’s legal “fixer” in New York, including some stints as a corporate attorney for the Trump Organization, Cohen has deep knowledge of Trump’s finances, business deals and personal life, three spheres that have been strewn with controversy and allegations of wrongdoing for years.

Cohen, 51, often appeared in thrall to Trump, who was his only client. He purchased apartments in Trump properties in Manhattan and often was tasked with silencing the real estate mogul’s critics by threatening in crude terms to sue reporters or arranging to pay hush- money payments to avoid negative publicity.

But Cohen also helped Trump prospect for business opportunities, and he could give Mueller details about Trump’s business endeavors in Russia.

After Trump launched his presidential campaign in June 2015, Cohen continued working on a proposal for a Trump-branded hotel tower and condominium project in the heart of Moscow.

Trump signed a letter of intent for the Trump Tower Moscow project on or about Oct. 28, 2015, according to a statement Cohen gave last September to congressional committees investigating Russian meddling in the election. The letter was not a binding contract, and the project fell through in early 2016.

In his statement, Cohen said the proposal and the decision to abandon it were “not related in any way to Mr. Trump’s presidential campaign.”

It’s unlikely that a sitting U.S. president can be charged with a crime under legal interpretations by the Justice Department. But members of Trump’s family could be indicted, and nothing bars prosecutors from pursuing a president after he leaves office.

After the Watergate scandal forced President Nixon to resign from office in August 1974, President Ford granted his disgraced predecessor an unconditional pardon for any crimes he might have committed against the United States while president.

In his plea hearing Tuesday, Cohen admitted he violated the law when he arranged to pay $280,000 to two women in 2016 so they’d stay silent about their alleged extramarital affairs with Trump years earlier. Cohen said he did so “in coordination with and at the direction of” the then-candidate.

“I participated in this conduct,” he told the judge, “for the principal purpose of influencing the election.”

Cohen faces several years in prison under his plea deal. He was released on bail until his sentencing, which is scheduled for Dec. 12.

According to his lawyer, Cohen has had a change of heart since last year, when he pledged to “take a bullet” for Trump.

“He has undergone a transformation, an evolution, whatever the word is, where he did a lot of things to defend Donald Trump that he now regrets,” Davis told NBC News as part of a unusual media blitz aimed at offering support to prosecutors. “He is a new person.”

Trump sought to distance himself from Cohen on Wednesday, albeit with sarcasm. “If anyone is looking for a good lawyer, I would strongly suggest that you don’t retain the services of Michael Cohen!” Trump tweeted.

He also compared Cohen unfavorably to Paul Manafort, his former campaign chairman, who was convicted Tuesday on eight counts of tax evasion and bank fraud after a trial in Alexandria, Va.

Manafort fought all the charges against him — he faces a second federal trial in Washington next month — instead of cutting a deal with prosecutors, as Cohen did in New York.

“Unlike Michael Cohen, he refused to ‘break’ — make up stories in order to get a ‘deal.’” Trump tweeted. “Such respect for a brave man!”

The special counsel brought the case against Manafort, and the U.S. attorney for the Southern District of New York prosecuted Cohen, although Mueller first referred the case to that office.

Cohen did not report the money as campaign donations, violating federal law in several respects. The undisclosed money buttressed Trump’s candidacy and exceeded the $2,700-per-election limit on contributions from an individual to a candidate.

Although prosecutors did not name Trump in court, they told the judge they could prove the payoffs were made in coordination with a candidate. The evidence would include text messages, phone records, emails, financial documents and audio recordings made by Cohen — a trove of information potentially damaging to the president.

Cohen “testified under oath that Donald Trump directed him to commit a crime by making payments to two women for the principal purpose of influencing an election,” Davis tweeted after the hearing. “If those payments were a crime for Michael Cohen, then why wouldn’t they be a crime for Donald Trump?”

“It is not illegal to pay hush money,” he said, and it’s not wrong if the payments “also accommodate the needs of the campaign to keep something quiet.”

But Nick Ackerman, a former Watergate prosecutor, described Trump as a “co-conspirator” in the campaign finance case. He said court filings outline a scheme to conceal the payments with phony invoices and shell companies.

“Cohen didn’t just go make payments to two women at random,” he said. “Someone had to put him up to it.”

With so many potential avenues for investigation, it’s unclear what else could be uncovered. There’s plenty of precedent for a president’s business dealings before entering the White House to cause legal problems down the line.

In the 1990s, the independent counsel inquiry into Bill and Hillary Clinton’s investments in Arkansas ultimately uncovered the president’s affair with a White House intern and his attempts to cover it up.

That led to President Clinton’s impeachment by the GOP-controlled House in December 1998, although Democrats, joined by a few Republicans, rallied in the Senate to prevent his removal from office.