Heeding a call to act, rain or shine 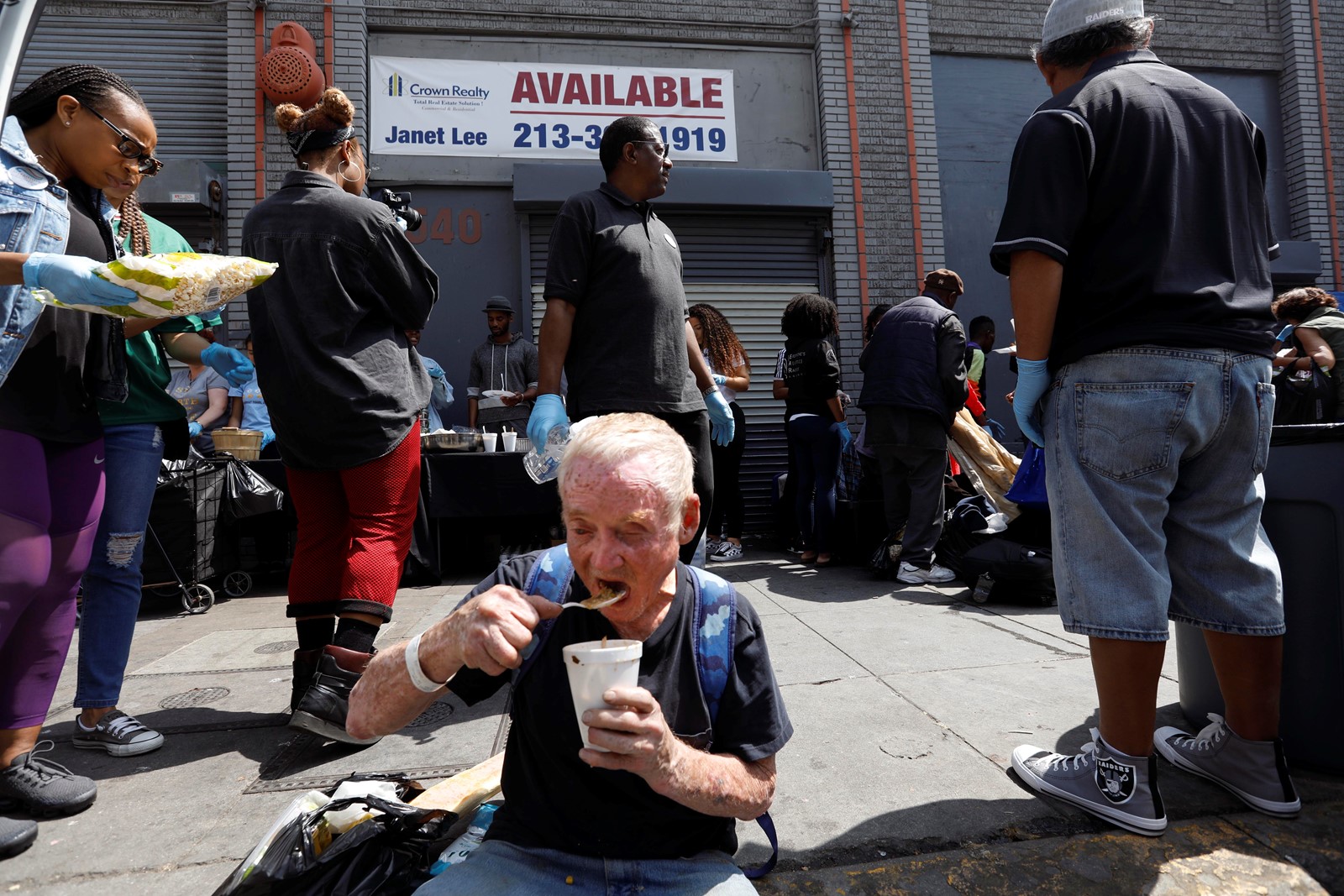 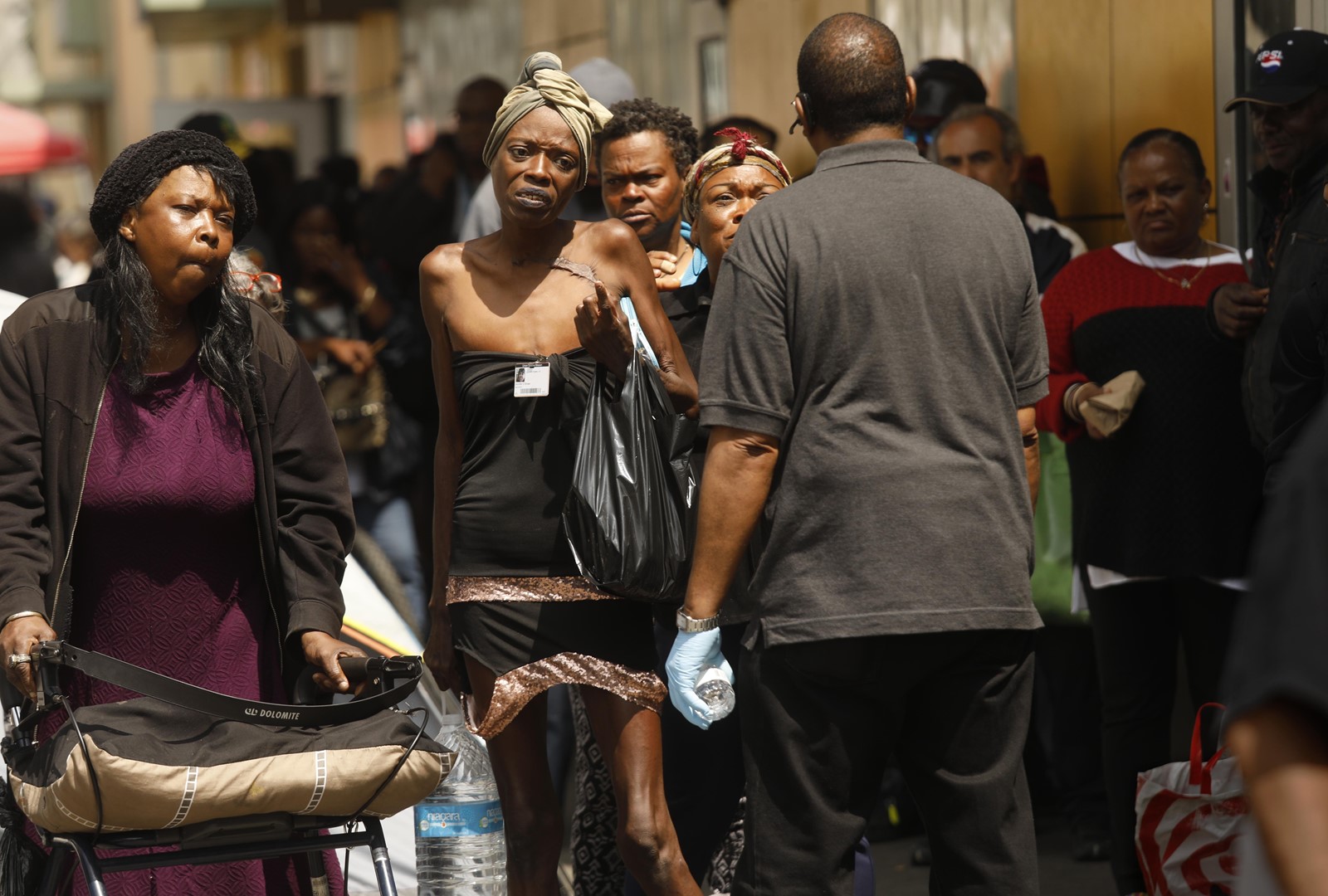 JENNIFER BROWN, center, and others from the homeless community wait in line as Thomas Garnett, right, ushers people inside to receive food and clothing. () 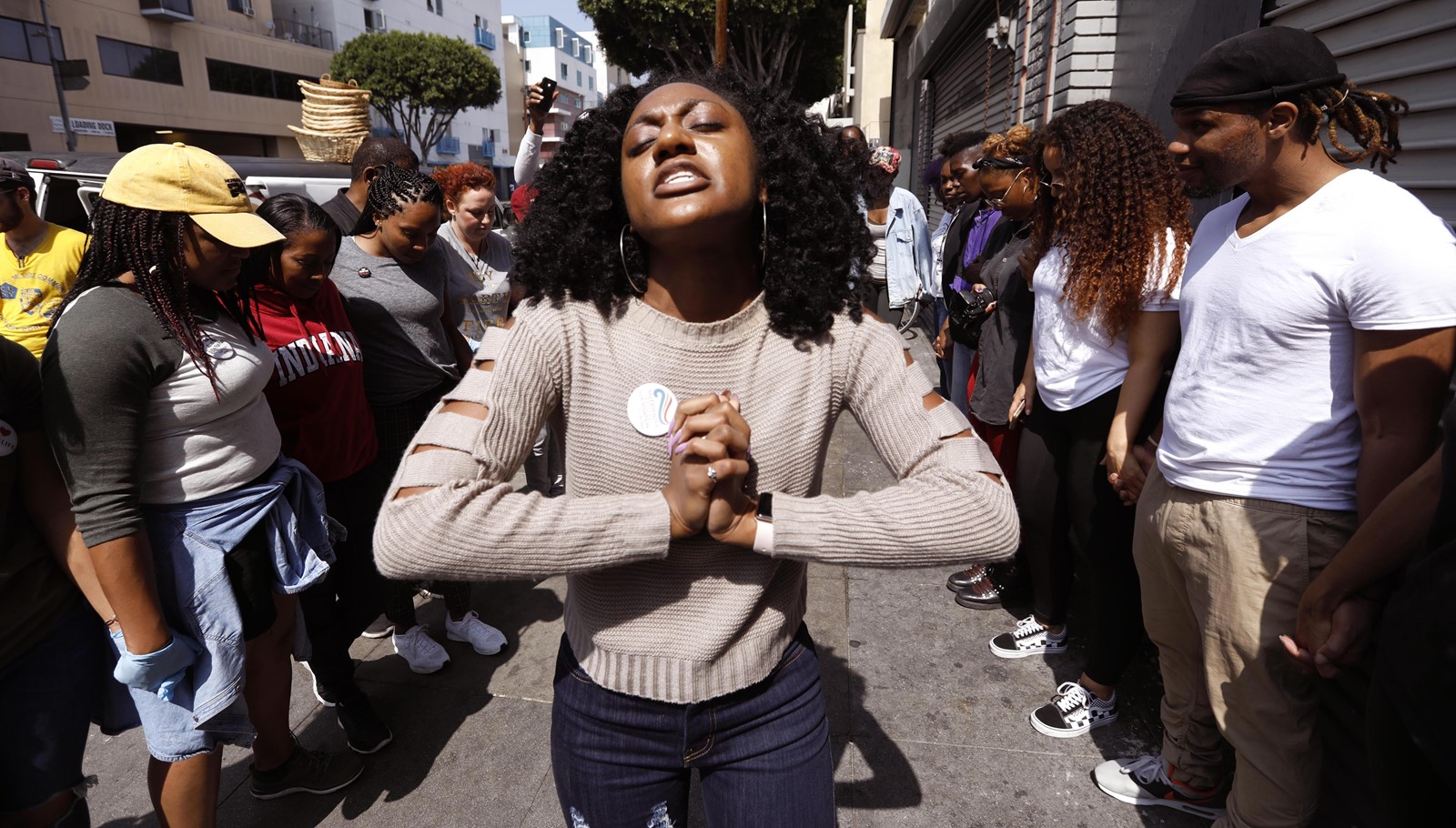 KIMBERLY DAVIS of the nonprofit My Friend’s House Foundation says a prayer beside fellow volunteers at the end of another food giveaway on skid row on April 4. (Photographs by Genaro Molina Los Angeles Times) 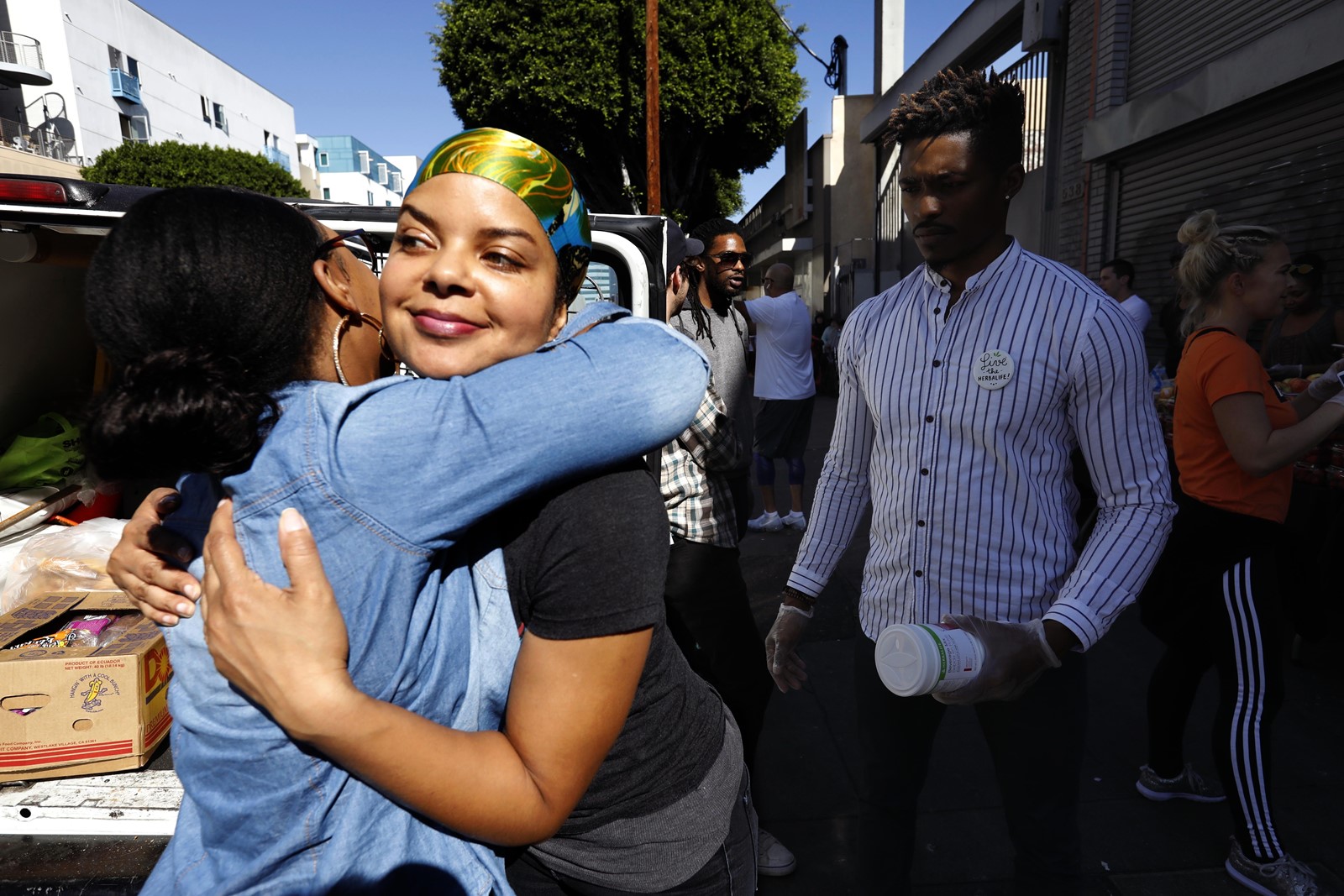 TIFFANY ROSE, the founder of My Friend’s House Foundation, receives a hug from a fellow volunteer. () 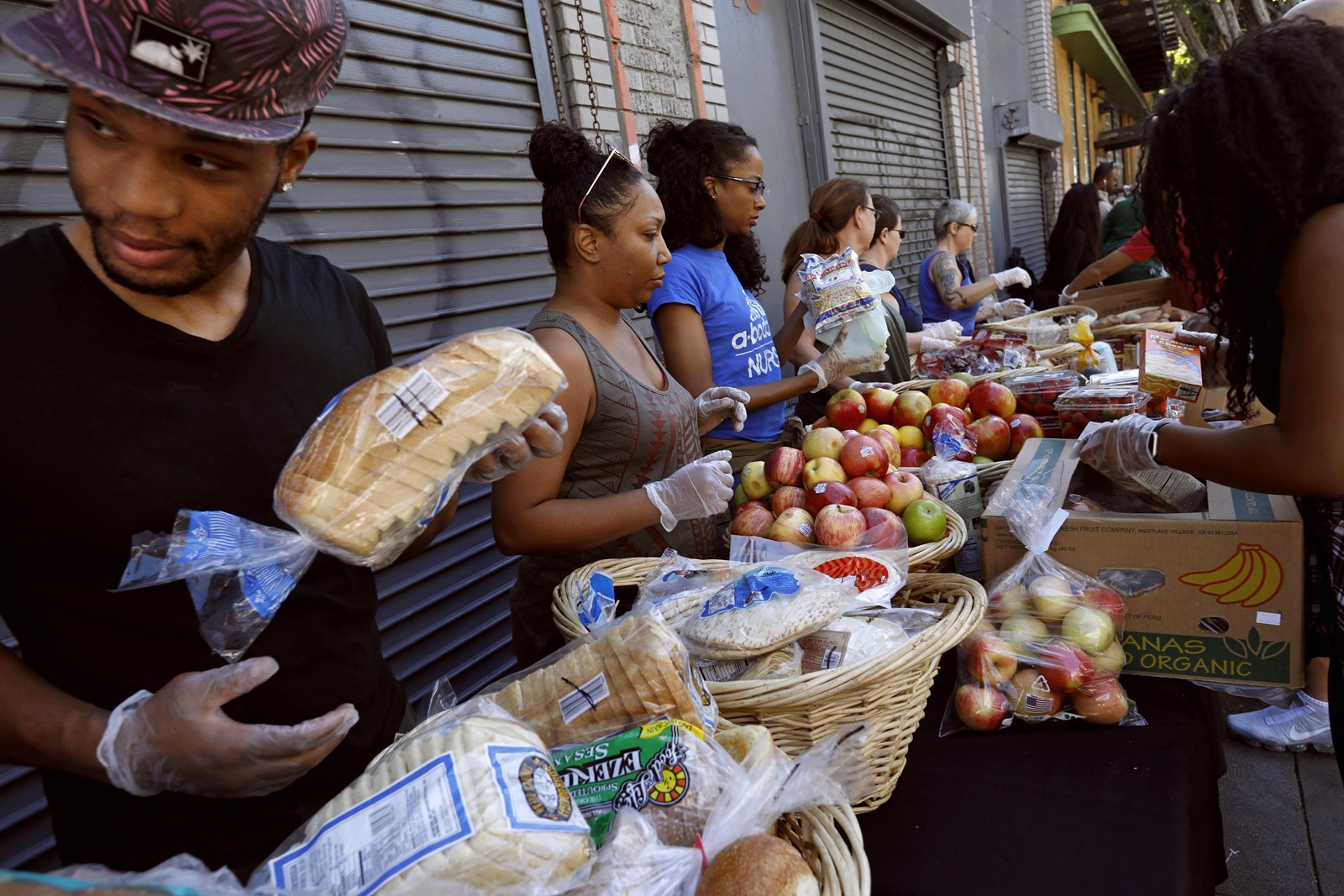 iffany Rose is a quiet force who has created a constellation of do-gooders. Each week she leads a small group of acolytes to skid row, where they give out food and clothing.

It’s a whirl of activity, and Rose is pulled in several directions at any given moment. Where should the perishables go? Who will be on the street teams that seek out skid row’s homeless to offer them food?

And who will stand where and which hashtag will they use when the volunteers tweet and post pictures to Instagram about her nonprofit organization My Friend’s House Foundation?

Each Wednesday though, rain or shine, Rose is at the center of this storm.

Clad in Army fatigues, she leads a group of friends as they set up tables and then hand out food to the city’s neediest. They feed a couple of hundred people and offer them additional sustenance and clothing that they can take away.

“We need someone to carry the tables,” she says to some other volunteers.

Rose is from Virginia and explains that when she first moved to Los Angeles and saw skid row, “it seemed surreal.”

“It moved my spirit and never left me. A friend of mine and I walked around on Sundays and we said we have to do this regularly. Consistency is key.”

In the last couple of years, Rose’s operation has expanded. The foundation now has a bricks-and-mortar location where it gives haircuts and sells clothes at discounted prices. The space is her pride and a logical continuation of the weekly food drive.

Along with the food and clothing giveaways, the heart of the organization remains the volunteers — some of whom have been with Rose since the beginning nearly a decade ago. Before they begin, though, Rose calls for everyone’s attention and they begin to pray. The homeless are lining up waiting, and once the prayer is over, they stream past as gospel music plays.

“I need shoes,” one person says. Rose informs her that clothing is at the end of the line.

As the day wraps up, Rose looks out on the people who are still homeless and destitute.

“We need to be reliable, consistent and dependable. The need never leaves.”