Trump steps all over his own message

Instead of touting policy triumphs, the president engages in a political strategy that hurts his standing. 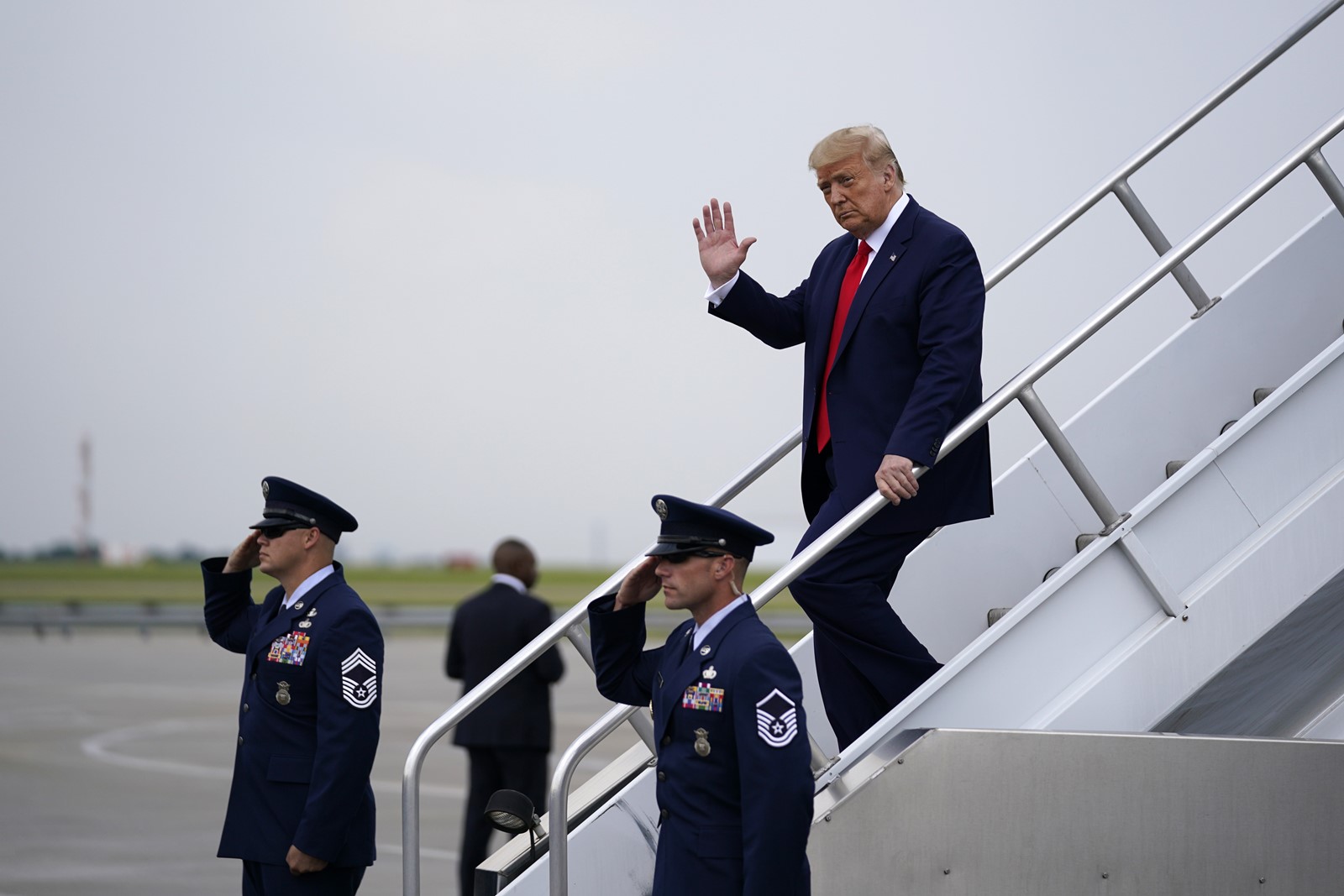 PRESIDENT TRUMP arrives in Atlanta on Wednesday for a trip to a UPS facility. He is frustrating advisors who want him to emphasize his accomplishments in speeches instead of waging often-meandering attacks. (Evan Vucci Associated Press)
PREVIOUS IMAGE

Throughout American history, incumbent presidents have typically run for a second term by highlighting policy accomplishments. But President Trump is far from typical — uniquely disinterested in most policy matters and, instead, focused intensively on personal grievances and political quarrels.

This week’s events offered prime examples of how easily those grievances and fights can obscure the policy messages that Republican professionals — and some on Trump’s staff — believe he has to stress if he is to have a chance of battling back into contention against his presumptive Democratic opponent, former Vice President Joe Biden.

On Tuesday, Trump scheduled a late afternoon news conference to announce an executive order to punish China for violating the democratic independence of Hong Kong.

The Rose Garden speech was intended to be part of a strategy that Trump’s campaign sees as crucial — blaming Beijing for the COVID-19 pandemic and establishing an advantage over Biden on whom voters trust more to handle China.

But the policy news got swallowed up in a 63-minute monologue Trump delivered that included riffs about illegal immigration, crime, trade, his relationships with other leaders, statues and monuments, school choice, energy taxes and the death penalty.

Adding to the cacophony, shortly before the Rose Garden appearance, Trump did an interview with CBS News in which he defended flying the Confederate flag as an aspect of free speech and downplayed the number of Black Americans killed by police — examples of the way inflammatory comments on race increasingly have become the central feature of his reelection pitch.

On Wednesday, Trump traveled to a UPS facility in Atlanta to unveil an executive order aimed at speeding up federal permits for major infrastructure projects.

Environmentalists have denounced the new rule as a weakening of major federal protections, but, especially amid the economic downturn, the move could appeal to Republican-leaning swing voters.

“This is a big deal and this is frankly front-page news all over this country,” Trump said at a speech in which he also criticized Biden as beholden to his party’s environmental left.

Instead of stressing that, however, the White House spent a good part of the day dealing with a controversy set off by an op-ed column in which Trump’s trade advisor, Peter Navarro, slammed Dr. Anthony Fauci, the government’s top infectious disease expert.

Fauci “has been wrong about everything I have interacted with him on,” Navarro said in his column in USA Today, which appeared online Tuesday night.

White House officials tried to distance the president from the column. Deputy Press Secretary Alyssa Farah tweeted that it “didn’t go through normal White House clearance processes and is the opinion of Peter alone.” Trump, she continued, “values the expertise of the medical professionals advising his Administration.”

But there’s little doubt that Navarro’s broadside reflected — and appealed to — the president’s own frustration with Fauci, who has not been invited to the Oval Office to brief Trump since early June.

According to one administration official, who was not authorized to speak on the record, Navarro had the president’s permission to write the column.

“Not only was he authorized by Trump, he was encouraged,” the official said.

“President Trump did not approve Peter Navarro’s op-ed, and the president has publicly noted that Peter should not have written this,” Meadows said in a statement, adding that “this anonymous source is providing false information and promoting a narrative that is purposefully attempting to deceive your readers.”

Trump, asked directly by reporters Wednesday if he was OK with Navarro’s opinion, demurred: “That’s Peter Navarro, but I have a very good relationship with Dr. Fauci,” he said.

Fauci, himself, said in an interview with Atlantic magazine that he had told Meadows that “ultimately, it hurts the president” when White House aides attack him. As for Navarro, “I can’t explain Peter Navarro. He’s in a world by himself,” Fauci said.

Navarro was not the first White House aide to attack Fauci. Over the weekend, Dan Scavino, the director of White House social media, who is close to the president personally, tweeted a cartoon mocking the doctor.

“There isn’t anyone in their right mind who would say this is a smart strategy in the middle of an exploding pandemic — ‘Let’s wage war on Tony Fauci!’ ” Axelrod said. “In no rational world does that make sense.”

Fauci maintains a much higher level of public trust than Trump. The latest nationwide poll from Quinnipiac University, released Wednesday, found that by 65% to 26%, voters said they trusted information from Fauci about the coronavirus. Conversely, by 67% to 30%, they said they did not trust information from Trump.

Reflecting poll numbers of that sort, some Republicans in Congress have made it clear they don’t support efforts to undermine Fauci, who has served as the director of the National Institute of Allergy and Infectious Diseases since 1984.

Rep. Michael C. Burgess, (R-Texas), a physician, said this week that Fauci is “well respected” and that criticism of him is misguided.

Trump’s lengthy, blunt attacks on Biden similarly served to get in the way of the policy messages that White House officials wanted Trump to stress.

His extended monologue drew criticism both for where it was delivered — presidents have typically avoided using the White House grounds for purely political campaign-style events — and for being bizarre and rambling, even by the sometimes-meandering standard of Trump’s speeches.

Trump accused Biden of being soft on China and also falsely characterized him as seeking to abolish windows in new buildings.

“The message should have been ‘taking strong action against China.’ Period. End of sentence,” said Alice Stewart, a Republican communications advisor. “It would have been much better for that specific message if he would have left it at that and not sort of meandered through a lot of talking points that made it come across as the New Hampshire rally speech he wasn’t able to give over the weekend.”

The campaign canceled the Saturday rally amid concerns that few would attend. Campaign aides blamed a forecast of bad weather — an excuse that was widely disbelieved.

Even if Trump showed more discipline, of course, the policy accomplishments he has to sell — aides tout tax reform, regulatory rollbacks and a raft of conservative judges given lifelong appointments to the nation’s courts — would be at risk of being drowned out by the continuing COVID-19 pandemic, which has killed more than 136,000 Americans and remains nowhere near controlled.

“The problem is breaking through the overwhelming attention focused on the pandemic, the subsequent economic meltdown and all the controversy surrounding the George Floyd killing,” said Whit Ayres, a Republican pollster. Trump polls relatively well only on the economy among those three topics and has brought further attention to the pandemic with the Fauci controversy, he noted.

One of the president’s biographers, Michael D’Antonio, views Trump’s struggle to mobilize a national response to the pandemic as something that would have required a greater attention span and ability to think outside his own self-interest than he has.

“P.T. Barnum is not who you want leading you in a pandemic,” D’Antonio said.

“None of the talents and inclinations Trump brought to the presidency as showman, developer and reality TV star are sufficient now,” he said. “Studying something with dedication or seriousness, learning a new thing — that’s never been his strength.”