Scenes of disaster play simultaneously in the Western U.S., Europe, China and Siberia. 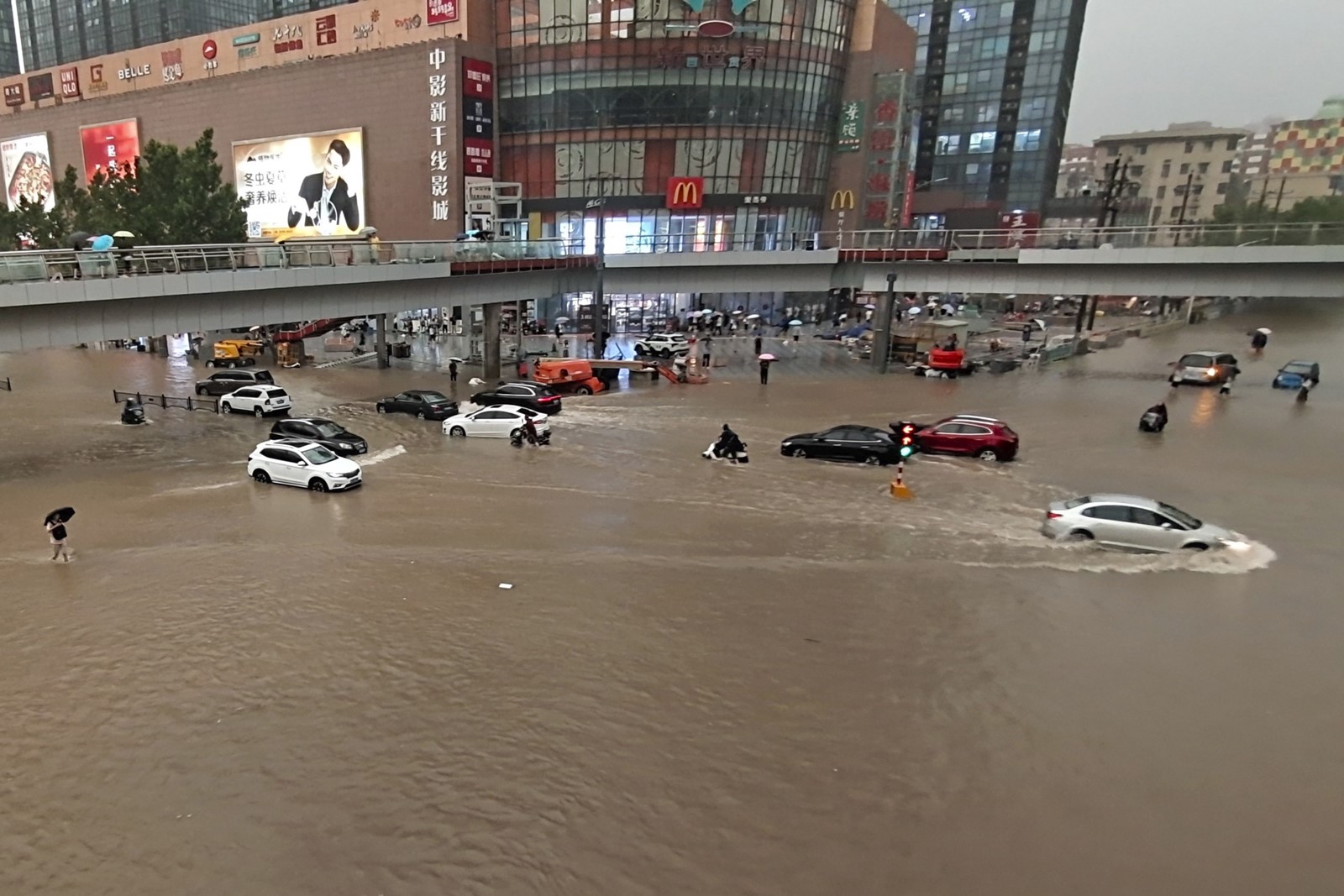 Zhengzhou, ChinaVehicles are stranded after a downpour that by Thursday had left more than 30 people dead. At one point, flooding trapped about 500 people in the subway. ( Chinatopix) 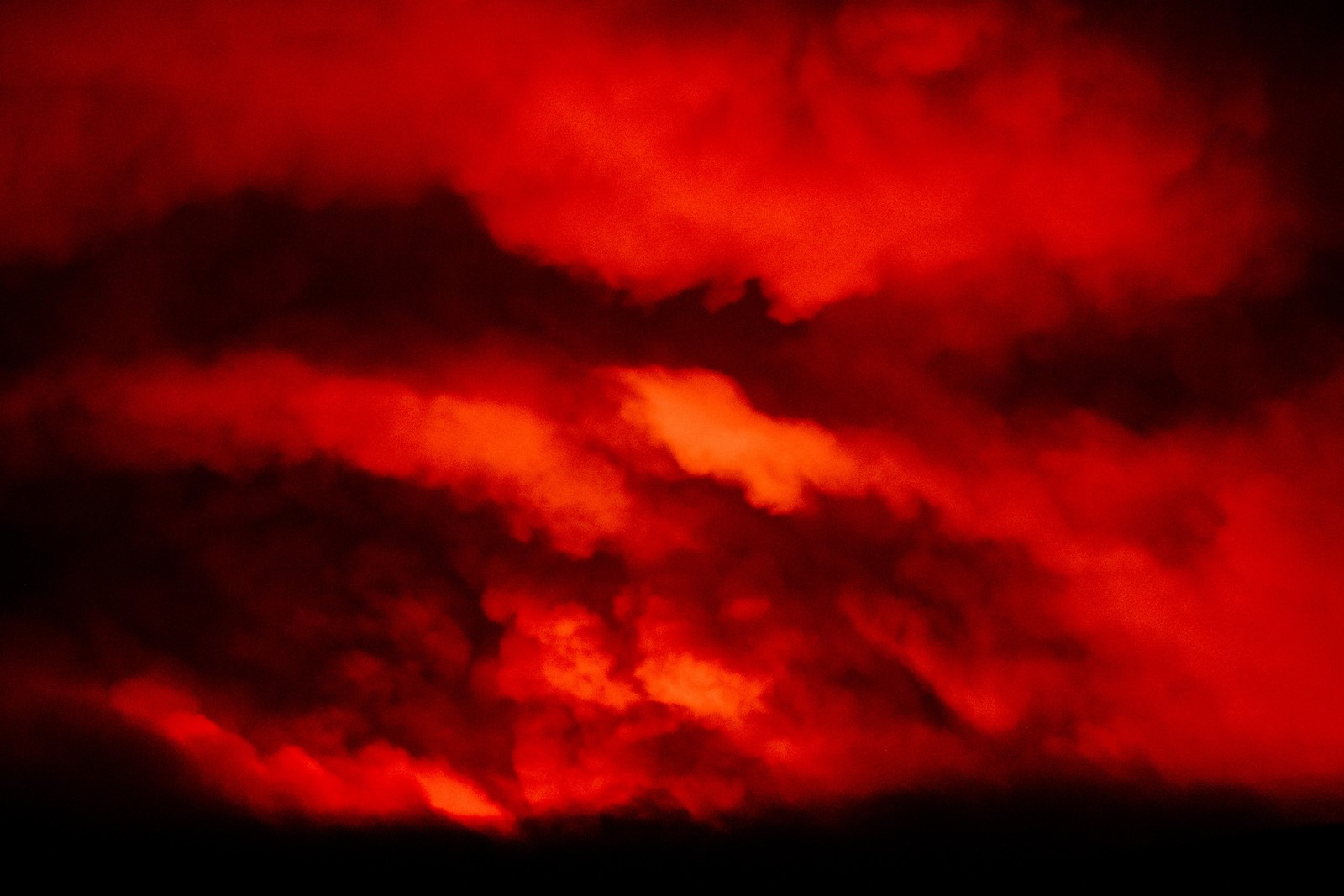 Bly, Ore.The Bootleg fire illuminates smoke at night last week; Oregon has been besieged by heat and drought. California is on pace for a record-breaking year in wildfires. (Payton Bruni AFP/Getty Images) 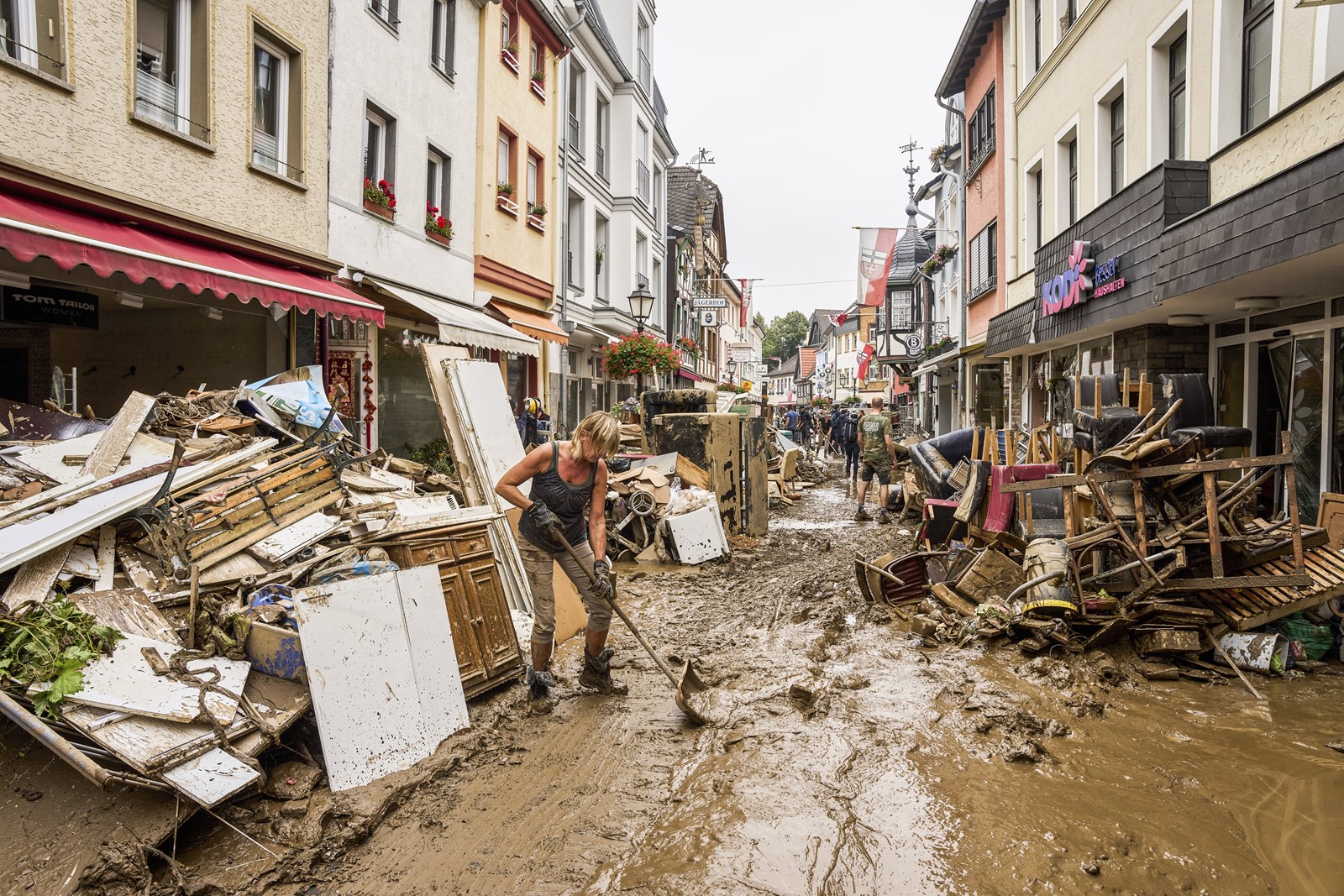 Torrents of murky brown water gushed past the train window, flowing fast through the subway tunnel. Inside, passengers stood on top of seats, clutching their phones overhead as the muddy tide rose past their chests. Some gasped for air. Others sent desperate last messages to family members, telling them their bank card passcodes and saying goodbye.

“The water outside has already come this high,” one frightened woman said, reaching out to the subway car door in a video that spread quickly online. “My phone is almost dead. I don’t know if this is my last WeChat message.”

The woman, one of some 500 people trapped on a subway amid catastrophic flooding Tuesday night in Zhengzhou, in China’s Henan province, reportedly survived. A dozen people did not. By midday Thursday, the death toll had climbed to 33 and eight people were reported missing. More than 3 million people had been affected by the rain, including 376,000 who were relocated to shelters.

The scenes of desperation and devastation in Zhengzhou added to a portfolio of disasters this year that have raised the specter of irreversible climate change as never before and offered glimpses of what it means to live on a warming planet where human survival grows more fraught.

Extreme weather this summer has flattened rural communities in Germany with floodwaters, triggered deadly mudslides in India and sparkedheat waves and fires that can be seen from space in the Western United States and Canada. Floods have also wrought damage in parts of New Zealand, Nigeria and Iran.

Scientists have been warning for years that rising temperatures will make dry conditions for wildfires more common in some parts of the world and, in other places, trap more moisture in the atmosphere, leading to heavier rainfall during storms.

Those conditions could cause more volatile events like the downpour over London on July 12, when about a month’s worth of rain fell on parts of the British capital, leading to flash floods that paralyzed some streets and forced the partial closure of its Underground rail system.

More unprecedented heat waves also could be in store, like those experienced this month in the Pacific Northwest, where hundreds of people are believed to have died from the extreme temperatures, and Russia’s Siberia, where nearly 200 separate forest fires have choked the region in smoke that has since drifted to Alaska.

“All of this was predicted in climate science decades ago,” said John P. Holdren, a professor of environmental policy at Harvard’s John F. Kennedy School of Government. “We only had to wait for the actual emergence in the last 15 to 20 years. Everything we worried about is happening, and it’s all happening at the high end of projections, even faster than the previous most pessimistic estimates.”

Scientists and environmental activists are in a race to persuade the world to reduce greenhouse gas emissions by enough to prevent global temperatures from rising more than 2.7 degrees Fahrenheit above preindustrial levels. Failure to do so could result in massive disruptions such as famine and widespread coastal flooding. Time is short: Global temperatures have already risen on average by 2.16 degrees Fahrenheit since 1880.

Last week, the European Union proposed sweeping legislation aimed at cutting emissions by more than half of 1990 levels by 2030 through the phasing out of gasoline and diesel cars and the imposition of tariffs on imports from polluting countries. The plan poses formidable challenges for the 27-country bloc, including trade tensions and a political backlash from those who deny climate change is happening.

Scientists say global warming almost certainly exacerbated the conditions for the floods that ravaged Germany, Belgium and the Netherlands last week, killing at least 180 people. Parts of Western Europe were battered by two months’ worth of rainfall in two days, leading to overflowing rivers and torrents of floodwater that toppled centuries-old buildings and saturated farmland that collapsed into giant sinkholes of churned earth.

“The German language barely has words for the devastation that has been wreaked,” German Chancellor Angela Merkel said at a news conference after surveying the area Sunday.

Rain has also inundated Luxembourg, France, Switzerland and Austria, where parts of the historic city of Salzburg were submerged.

Farther north, Finland is recovering from its warmest June on record — mirroring unusually hot conditions in North America that paved the way for the destruction of whole communities by fire, such as Lytton in Canada, where temperatures rose past 120 degrees.

Scientists at the United Nations’ World Meteorological Organization said it was virtually impossible for the heat waves in the U.S. and Canada to have occurred without the influence of human-caused climate change. They calculated that rising temperatures caused by greenhouse gas emissions made the heat wave at least 150 times more likely to happen.

California is already on pace for a record-breaking year in wildfires, and Oregon has been besieged by heat, drought and the nation’s largest blaze, the 360,000-acre Bootleg fire, which is creating massive clouds of smoke and ash that can be seen from space and have brought haze to East Coast skies.

The impact is being felt most acutely by people who have lived off the land for generations.

Don Gentry, chairman of the Klamath Tribe in southern Oregon, said pine stands he’d relied on for firewood were dead or dying and marshes were drying up. That’s changing the tribe’s relationship with the land on which it has treaty rights to hunt, fish, trap, camp and conduct spiritual activities. It’s where Gentry grew up hunting deer and elk with his dad, and later hunted with his son.

“Water availability is critical to the forests here,” Gentry said. “We’re seeing it: the loss of the health of the forest and the extreme fire risk. This year, it’s just unprecedented dry conditions, and that’s why you have a fire that’s almost 400,000 acres.”

Roughly half the tribe’s 5,600 members live among the towering pines of Klamath County. Many are feeling a sense of loss, Gentry said.

“It doesn’t even look like [how] it was. We lost old Ponderosa pine,” he said. “We’re so tied to the land that it’s going to be devastating to our folks.”

While Gentry longs for rain, the more than 5 million residents of Zhengzhou are desperate for the clouds to leave.

At least 25 people have died in the floods caused by record-high rain that have shocked the nation. Local news and social media users in Henan province posted dozens of images and videos online of cars bobbing in floodwaters like apples, harrowing rescues in fast-moving torrents, and pale, soaked flood victims crumpled on subway station floors.

More than 8 inches of rain hit Zhengzhou in one hour Tuesday afternoon, according to the Henan weather agency, and more than 23 inches of rain from July 17 to 20. That was equivalent to a year’s worth of rainfall hitting Zhengzhou in just three days, according to a video posted on the agency’s Weibo page. It was a “once-in-a-thousand-years storm,” the video host said.

Late Tuesday, China’s military blasted a dam in the nearby city of Luoyang to release rising floodwaters. Public transportation in Zhengzhou was halted. Hundreds of patients at a hospital hit by a power cut were transferred to other facilities, local officials reported.

North of Zhengzhou, the Shaolin Temple, whose monks are famous for their practice and mastery of martial arts, was also hit hard by the torrential rain, media reports said.

On Wednesday, downpours continued to batter Henan, one of China’s most populous provinces, home to major agricultural and industrial enterprises.

Chinese authorities have not mentioned climate change as a factor in the deluge. Nor did they link last year’s flooding across southern China to climate change. But an increase in extreme heat and rainfall events has alarmed scientists.

Last week, Greenpeace East Asia released a report analyzing climate risk from extreme heat and rainfall in urban areas around Beijing, Shanghai, Guangzhou and Shenzhen. It found that dense city centers were at highest risk. Extreme heat and extreme rain have increased in all these urban areas over the last 60 years, the report found, though the overall precipitation picture has fluctuated between periods of heavy rain and drought.

Beijing is heating up the fastest, the report said, with an increase of about 0.6 degrees Fahrenheit every 10 years. Shanghai is experiencing the fastest rise in heat waves. Guangzhou and Shenzhen have had 98 heat waves since 1961, Greenpeace found, with 73 of them occurring in the last 23 years.

More than 100,000 people have been relocated from low-lying areas in Zhengzhou. Many flood victims were still stranded and posting requests for help or search notices for missing family members Wednesday amid power outages and poor cellphone connections.

One of China’s major initiatives to combat extreme rain and floods in recent years has been the “sponge city” strategy — reducing the amount of concrete in cities and restoring natural riverbanks and green spaces that can better absorb sudden rainfall. Zhengzhou is a pilot “sponge city.”

In 2018, the city pledged to spend $8.2 billion by 2020 on “sponge” construction. In June, state media reported that Zhengzhou had eliminated more than 75% of the city’s flood-prone points. But experts said that this week’s rain was so intense that the city’s sponge capacities were overwhelmed.

“It’s like a small sponge: If you pour a bowl of water, it can be absorbed. But if you pour a whole bucket, it cannot,” Zuo Qiting, a professor at the School of Water Science and Engineering at Zhengzhou University, told China Science News. “A [rainfall] level of once-every-few-years can be dealt with. But not something beyond that level.”