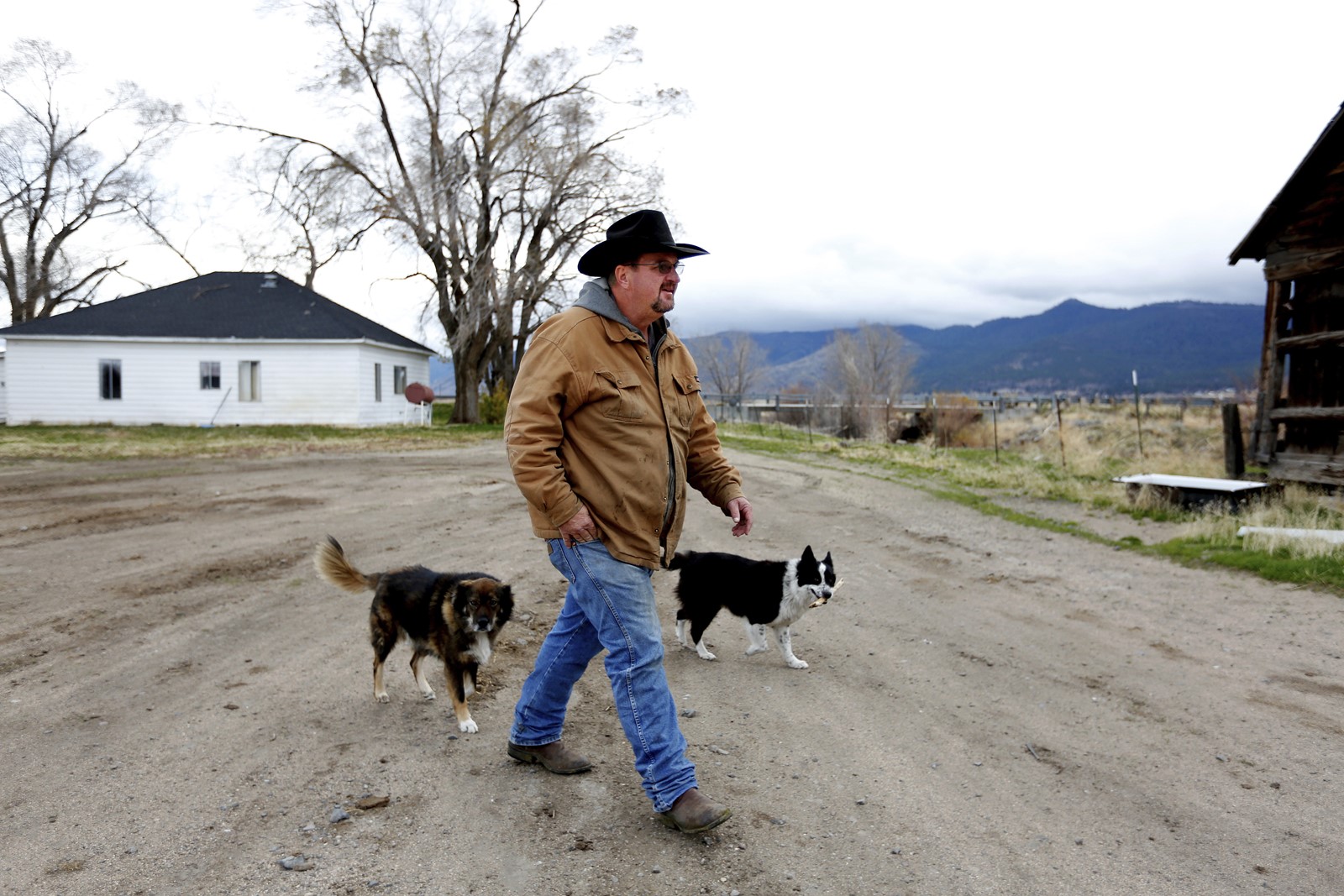 On election day, Denise Pickens had a surprising feeling: hope.

Surely, she figured, Gov. Gavin Newsom would be booted out of office. Or at least get a good scare.

There was such fervor here in rural Lassen County — where a whopping 84% of voters supported the recall, the highest percentage in the state — that it was hard not to believe it could happen.

Then, Newsom’s landslide victory landed like a kick in the shin with a steel-toed boot.

“I went to bed really wanting to put a ‘for sale’ sign in front of my house,” said Pickens, 50, as she sipped a chai tea latte outside Artisan Coffee in Janesville, population 1,400.

Once again, the votes of vast, rural Northern California, which overwhelmingly supported the recall, were drowned out by urban liberals, Pickens said.

As for the California Republican Party, which had its best shot in over a decade of governing the state?

“Part of me is just like, you know what, the Democratic progressive machine is what it is, and there’s just not enough of us,” she said.

Getting the recall on the ballot initially felt like a win here in Northern California, where conservatives have long felt they would be better off seceding to form their own state called Jefferson.

But there was no symbolic, emotional victory in forcing an election. The result was a walloping that displayed, in the harsh, bright lights of a lopsided scoreboard, who is firmly in control of this state.

“The Democratic Party is the New York Yankees, and the Republican Party in this state is the minor leagues,” said Christopher Cole, the former chairman of the Lassen County Republican Party. “You can’t compete.”

The results — with Newsom prevailing 64% to 36% as of Friday — put California’s urban-rural divide on stark display. Every county in Southern California rejected the recall, as did the entire coast, save for tiny Del Norte County in the state’s northwest corner.

The far north, the heart of red California, heavily supported it. The agricultural Central Valley — which has been tilting to the left after decades of Republican domination — did too, but by smaller margins.

The governor seems to have no illusions that he’s beloved in these regions. In his 2019 inaugural address, Newsom pledged to represent all Californians, saying he recognized that “many in our rural communities believe that Sacramento doesn’t care about them, doesn’t even really see them.

People here, though, never believed him. A common refrain is that “King Newsom” doesn’t visit unless there’s a wildfire and a photo op.

“We’re only 3½ hours away from Sacramento, but we might as well be on the other side of the moon,” said Cole, a 63-year-old videographer who lives in Susanville and voted for state Assemblyman Kevin Kiley (R-Rocklin) to replace Newsom. “The people of Lassen County aren’t crazies or cuckoos. They’re hard-working, warm, patriotic people, but I think there’s going to be a smoldering resentment for a long time to come.”

Cole called the election “a disaster” by a disorganized state GOP that never threw its support behind any particular candidate. He envisions people here splitting from the state Republican Party and increasingly supporting the Jefferson secession movement.

Jessica Newton, who owns a Main Street dance studio in Susanville, said she has mixed feelings about the expensive election.

But she did not choose a candidate to replace Newsom, because she wasn’t thrilled with the choices.

“Was it good to show the statement that we were united? Yes,” Newton, 36,said of the election.

“Is it the best carryout of public funding? I don’t know.”

Moving forward, it will be incredibly difficult to bridge the cultural divide between red and blue California, said Kim Nalder, director of the Project for an Informed Electorate at Cal State Sacramento.

“One of the things that makes it really hard for folks to accept defeat is we live in these ideological bubbles, and, especially in this state, it’s really geographical,” Nalder said. “If you live in Lassen County or the foothills along the Sierras, you don’t see a lot of support for Gavin Newsom. You see a lot of Jefferson signs or, still, some Trump signs. It seems almost impossible that people feel different elsewhere, and on the flip side, the opposite is true in the major metro areas.”

In Lassen County, a remote outpost bordering the Nevada state line, the small towns that backed the recall are hurting.

Along the 90-minute drive on Highway 395 from Reno to Susanville, the hillsides are black, the air is smoky and signs depicting Smokey Bear warn of “very high” fire danger.

More than 30 homes in the town of Doyle, population about600, burned in the Sugar fire in July. Last month, the Dixie fire took out several houses near Janesville.

Many here blame liberals for policies that, they believe, have led to overgrown forests and more destructive wildfires.

In Susanville, where the population has shrunk dramatically over the last 15 years, residents are preparing for potential economic devastation after the state’s planned closure of the California Correctional Center, a minimum-security prison that employs more than 1,100 people and trains inmate firefighters.

The city is suing the Newsom administration for closing the CCC ahead of older, more rapidly deteriorating prisons. Local officials say they have been kept in the dark about how and why the decision was made, which has only bred more resentment of Newsom.

“We were really hopeful that if the governor was recalled and this decision truly came from his office, that the new governor would look at the situation and see that this is not the best decision,” said Kerri Cobb, a loan originator who has been fighting the closure.

In an interview at Lumberjacks Restaurant, Cobb, 50, said she grew up as part of a proud timber family in Susanville. Her father was a logger; her grandfather, a crew boss. Her husband worked at a sawmill, then became a correctional officer at High Desert State Prison, next door to CCC, after the mills began closing.

She said it feels like her beloved hometown has been in a long economic decline and that the governor and the rest of the state don’t care.

Sitting next to her, Hunter Anglea, 61, of Janesville, said the recall result strengthened his urge to leave California.

“If my house burns down, it’ll be the time to go,” said Anglea, who worked at CCC for 25 years before recently retiring as warden of the Sierra Conservation Center.

Tensions between rural communities and the Newsom administration over its handling of the pandemic helped fuel the recall movement here.

Last month, several Northern California counties with lower vaccination rates had more patients hospitalized with COVID-19 than at any point in the pandemic.

Case numbers have fallen in recent days, as they have across the state.

Lassen County Supervisor Jeff Hemphill said the stress from getting so many frantic calls and emails from people he knew who were afraid of losing their businesses and not being able to pay rent gave him ulcers that sent him to the hospital for 10 days.

Hemphill, a rancher who lives in the Janesville house his family built in the 1930s, said Northern Californians have wrongly been caricatured as “a bunch of hicks.”

“They say rednecks, they say uneducated,” added his wife, Nancy, a civilian employee for the U.S. Department of Defense. “Both Jeff and I hold degrees. I’m working on my master’s degree. So nothing could be further from the truth.”

Hemphill said people here have to move forward after the election disappointment, and that he hopes Newsom at least learned a lesson.

“I’m being optimistic that he has had that epiphany, ‘You know what, I do work for the people. Ultimately, they’re my boss.’ ”

“I don’t believe he learned anything,” Nancy said.

Back at Artisan Coffee, Pickens said she too felt that the recall defeat just reinforced the sense that people here are looked down on as “the oddball cousins, up here in the middle of nowhere.”

Pickens’ husband is a correctional officer at CCC, where the state transferred coronavirus-infected inmates from San Quentin State Prison last summer, leading to a major outbreak in Lassen County. She blames Newsom for case numbers rising here and for the disruption her teenage son faced with school closures.

“But I’ve been saying for weeks, if he wins this, we are screwed.”