Mexicans lash out over water sent to U.S.

Drought-stricken farmers who object to deliveries seize a dam. One dies in gunfire from National Guard. 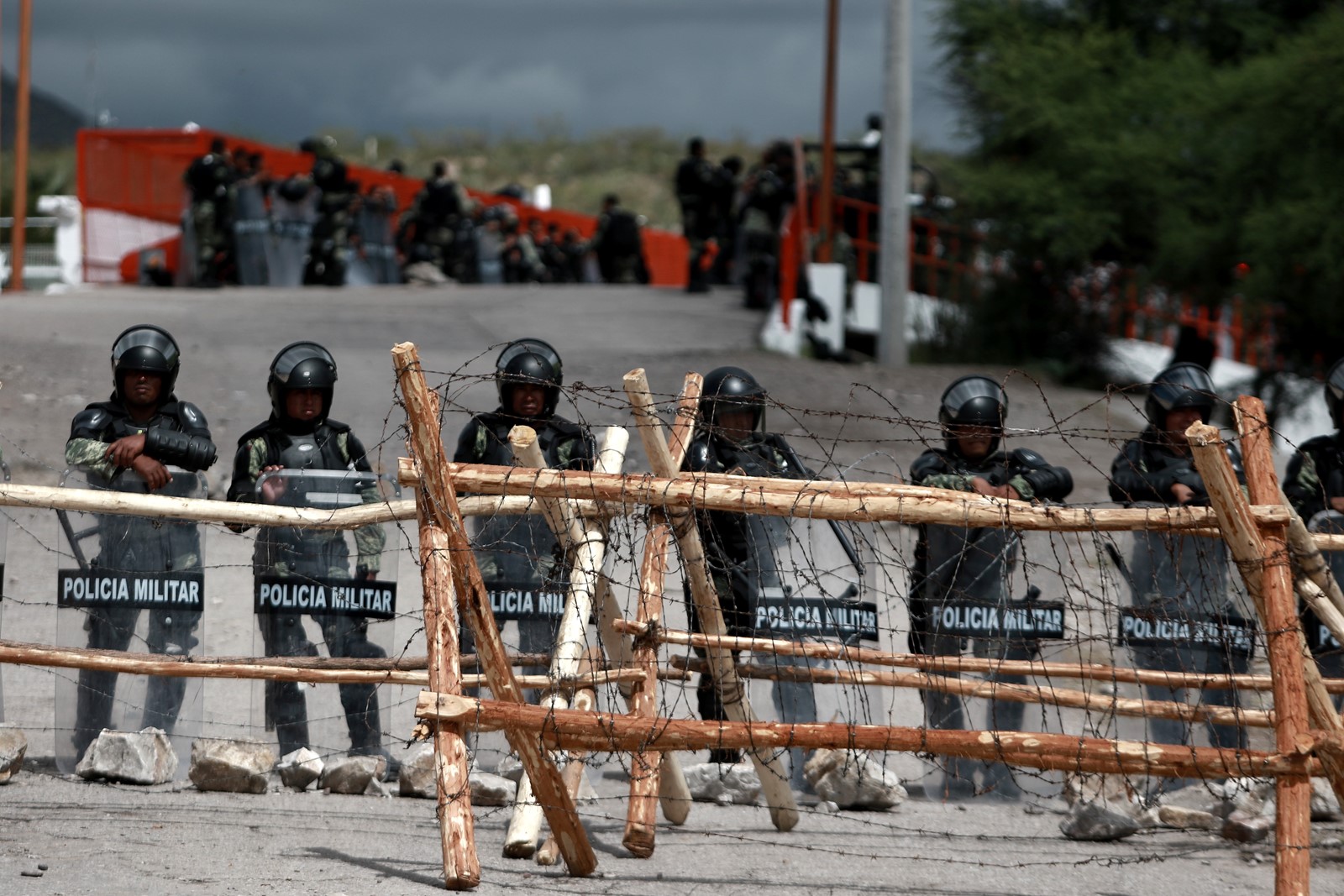 A long-simmering dispute about shared water rights between Mexico and the United States has erupted into open clashes pitting Mexican National Guard troops against farmers, ranchers and others who seized a dam in northern Chihuahua state.

A 35-year-old mother of three was shot dead and her husband seriously wounded in what the Chihuahua state government labeled unprovoked National Guard gunfire.

The demonstrators and state officials complain that the administration of Mexican President Andrés Manuel López Obrador is diverting water to the United States at the expense of drought-stricken Mexican farmers and ranchers.

“We will defend our water until the end,” said Alejandro Aguilar, 57, a Chihuahua tomato and onion grower who was among the protesters. “We will not end our fight, because this liquid is vital to our future.”

La Boquilladam remained in protesters’ custody as of Saturday amid rumors that the federal troops were readying to mount an assault to recapture the strategic facility.

The conflict has escalated into a national crisis in which both sides allege rampant corruption and the meddling of shadowy provocateurs and hidden political interests in a complex scenario reminiscent of “Chinatown,” the iconic film about early 20th century water battles in Southern California.

López Obrador denies any water shortage for farmers in Chihuahua and charges that his opponents are fomenting a politically motivated “rebellion.” Mexico has been sending water north in advance of an October deadline to provide the United States with a vast amount of water owed under terms of a 76-year-old treaty.

“We have to comply with the agreement,” López Obrador told reporters, insisting that doing so will not result in any scarcity now or in the future. “We will not allow that Chihuahua be left without water.”

Mexico is playing catch-up in its water debt to the United States after falling behind on last year’s installments. Meanwhile, Chihuahua growers say they are suffering the effects of an almost decadelong drought.

López Obrador, a leftist populist, has carefully cultivated strong ties with the Trump administration. And in a U.S. presidential election year, he clearly does not want the binational water issue to provide fodder for President Trump to engage in a new round of campaign-time Mexico-bashing.

López Obrador has voiced fears that Trump, who launched his 2016 campaign with a message that Mexico was sending “rapists” and criminals to the United States, could retaliate should Mexico fail to pony up its water debt.

“We don’t want sanctions; we don’t want a major conflict,” López Obrador told reporters. “Imagine if, for failing to comply, they close the border on us.”

In recent months, Mexico has endeavored to meet its obligation by opening dam sluices and releasing water into rivers that flow into the Rio Grande, which forms much of the U.S.-Mexico border.

The flows from Mexico provide crucial irrigation for vegetables, sugar cane and other crops in south Texas.

Mexican officials “need to increase their water releases to the United States immediately,” Jayne Harkins, U.S. commissioner of the International Boundary and Water Commission, the binational body overseeing border treaties between the United States and Mexico, warned in July.

“Continuing to delay increases the risk of Mexico failing to meet its delivery obligation,” said Harkins, a Trump administration appointee.

A 1944 binational treaty — still hailed as a groundbreaking international pact — mandates U.S. water distribution to Mexico via the Colorado River and Mexican allocation to its northern neighbor via the Rio Grande. Mexican officials concede that the treaty is advantageous because Mexico receives four times the volume of water that it delivers to the United States.

“That’s a lot of water to make up in a short period of time,” said Sally Spener, spokeswoman for the U.S. section of the commission. “Mexico cannot simply kick the can down the road.”

The treaty, Spener noted, does not specify sanctions for noncompliance and assumes that both parties will make “good-faith efforts” to fulfill mutual obligations.

Recent Mexican discharges meant to shrink the water balance to the United States sparked sometimes violent protests in Chihuahua, a mostly desert state that is home to large-scale farming of vegetables, grains and other crops, along with ranching.

The outnumbered troops finally pulled back — a step that the president later called “prudent” — and the protesters occupied the dam.

The National Guard says “armed civilians” in vehicles later attacked retreating soldiers, who “repelled the aggression.” But in doing so, soldiers reportedly killed the woman and seriously wounded her husband.

“In our investigations, no one confirms the version that the National Guard was attacked first,” said Chihuahua Gov. Javier Corral, who is a member of the National Action Party, a conservative opposition bloc that the president has blamed for fanning the crisis.

“It is one thing to look to win the governorship of Chihuahua, and something else to deceive, manipulate and use such a delicate matter for electoral goals,” López Obrador said.

Gubernatorial elections are scheduled for next year in Chihuahua, where, as elsewhere in northern Mexico, voters have long been cool to López Obrador. The ex-Mexico City mayor’s power base is in central and southern Mexico. The country’s north-south political divides play into the bitter water conflict.

The president has alleged that unnamed “interests” and “water bosses” in Chihuahua have long manipulated supplies to benefit wealthy growers, who have made fortunes from planting large tracts of crops such as alfalfa and walnuts that need extensive irrigation.

Water users in Chihuahua have likewise cited sinister “dark interests” fomenting discord, in the words of Salvador Alcántar, who heads the state’s association of irrigation users.

Protesters say they do not seek to renegotiate the binational water treaty. Rather, they say the Mexican government should seek alternative solutions, such as waiting for fall rains or diverting water from border areas less drought-afflicted than Chihuahua.

Mexican officials respond that time is running out and that the water flows from Chihuahua are essential to settle the country’s international arrears. The two sides appear no closer to a solution.

“For us, here, the question of water is fundamental,” Alcántar said. “It is the patrimony that we inherited from our grandparents, our parents. And now we have to leave it for our children.”