Many spend days alone in rooms, with food delivery their only human contact. 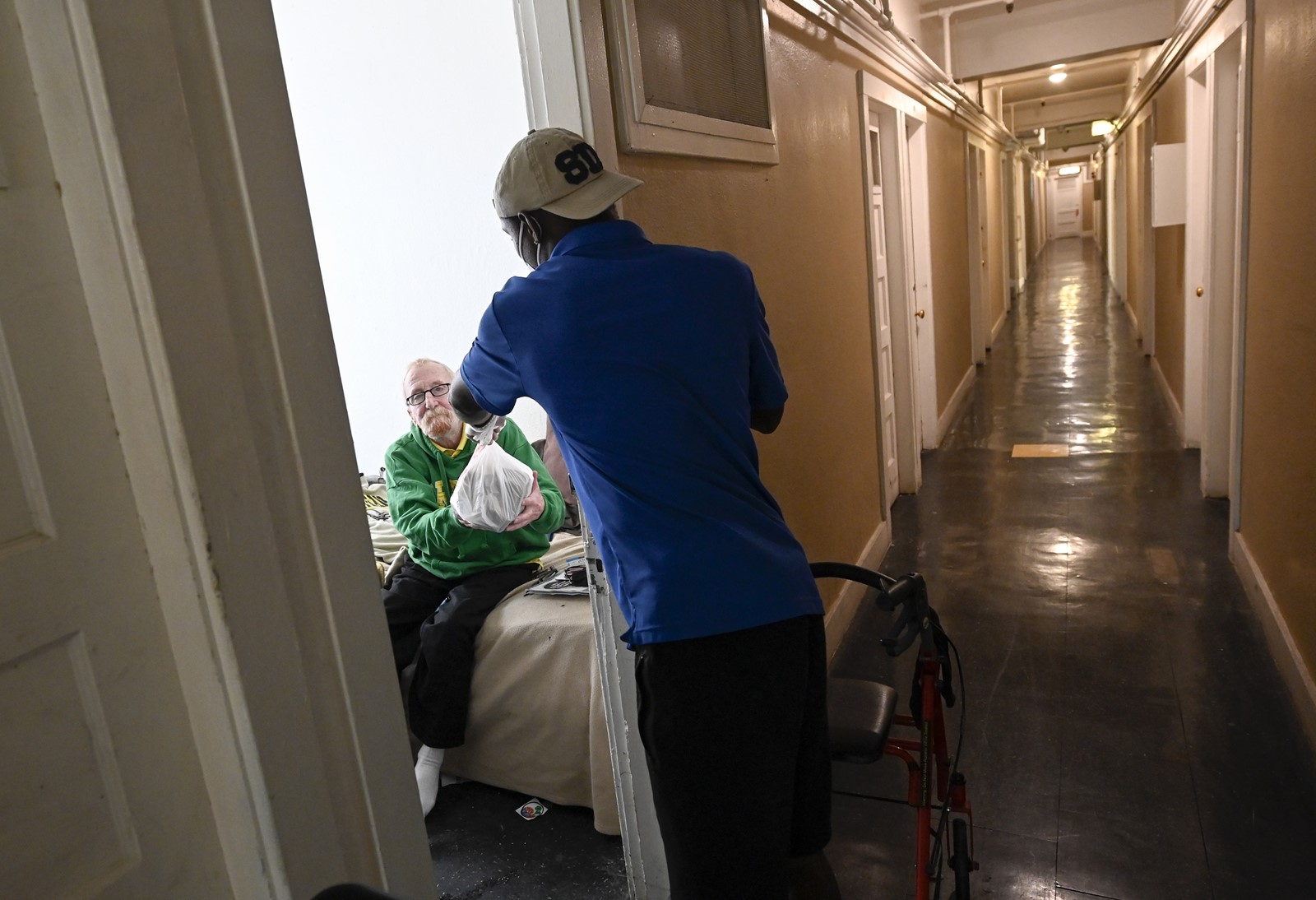 Evelyn Rogers loved going to the Potiker Family Senior Residence in downtown San Diego to join a friend in a singing group, do arts and crafts, work on a computer and socialize with others.

“You could stay for hours and play videos or play the piano,” recalled Rogers, 60. “But we’re not allowed to do anything anymore. We can’t have fun with other people.”

The Potiker Family Senior Residence and the Gary and Mary West Senior Wellness Center, both operated by the nonprofit Serving Seniors, discontinued their in-person classes and activities in March because of the COVID-19 pandemic.

Paul Downey, president and CEO of Serving Seniors, said the move was made to protect the health of the clients they serve. But it also came with a cost.

“Aside from, obviously, the health implications of catching COVID, the single biggest impact of this is the social isolation,” he said. “On a typical day at the wellness center, we’d have 500 and 600 people come through. They could do travel classes, tai chi, yoga, chair aerobics, go to the cyber cafe, a singing group or do art projects.”

That all ended in March. Now, a room that once saw the same friends meeting daily for meals is used for packing food into boxes for delivery, a service that grew from 60,000 deliveries a month to 220,000 to help seniors who are shut in.

For some, the quick handoff of the packaged meals five days a week is one of the few interactions they have with another person.

“There’s not much to do, due to the COVID,” Rogers said. “Just stay home and wait for my food.”

In response to the isolation many seniors are experiencing, Serving Seniors has created Connections, a program in which volunteers call homebound seniors three days a week to chat and check up on them.

The nonprofit isn’t alone in recognizing the plight of many seniors during the pandemic. The San Diego Seniors Community Foundation this year launched a $1-million No Senior Alone initiative and has provided about $200,000 in grants to various organizations to address the issue.

Samond Hayes, 21, is one of the Serving Seniors delivery drivers who bring food to people’s homes. Rogers is among about 100 people on his route, which covers 13 buildings.

“Serving Seniors,” Hayes says as he knocks on each door on his route. People usually answer with a heartfelt smile and thank Hayes, although some are bedridden and ask him to come inside.

On Tuesday, he delivered a warm Salisbury steak dinner and bags with breakfast and lunch. There would be no deliveries on Thanksgiving, but Wednesday’s delivery would include turkey for clients to enjoy on the holiday.

His first stop was to a disabled woman who lives at Lions Community Manor.

“One time I went in and she was on the floor,” Hayes said, revealing that sometimes his job involves more than just food delivery. “I had to help her up.”

At the Sara Frances Hometel, client Judy Trotter, 77, also said she does little outside her room these days.

Trotter’s isolation isn’t because of COVID-19, which she said she isn’t worried about. Rather, it’s her own lifestyle choice.

Michael Stone, who also lives at the Sara Frances Hometel, said that at 66 he is concerned about catching COVID-19, so he spends much of his day watching Netflix and cable TV at home.

“I don’t want to catch this thing,” he said. “I have to be around for the ones who love me. I don’t go anywhere. I don’t do anything too much. My life is very bland, but I’m alive and I’m safe.”

Stone is known in the local music scene as Stoney B. As leader of the Stoney B Blues Band, he used to play four gigs a week. With the shutdown, he’s played four shows since March, including two that were livestreamed for safety reasons.

“We were just happy as hell to be playing somewhere together,” he said.

Though some clients said they were going stir-crazy, others said they had adapted.

“It could be worse,” said Tom Treher, a Horton House resident who will turn 74 on Dec. 4. “Much of my life has been here in my apartment anyway, listening to sports shows. I keep myself active. I still do floor exercise and that sort of thing. I play guitar a little bit.”

Treher is blind, but he goes shopping on his own. He used to go to the Blind Community Center but now participates in the organization’s virtual classes.

“I have Spanish on Monday and French on Friday,” he said. “There’s trivia on Wednesday and bingo on Friday.”

As for person-to-person contact, Treher said that’s limited to Hayes, people he meets in the lobby and others he meets while shopping.

At the Golden West Hotel, Serving Seniors client Richard Parker, 70, also said he does not feel isolated because of the shutdown.

“I have a very nice mountain bike and ride as much as I can,” he said. “I stay away from most people.”

Parker said he is taking the pandemic seriously.

“This virus, whatever is going around, is no joke,” he said. “I’ve been watching the news. I’m coping with it.”

Fellow Golden West resident Kenneth Gerber, 74, said he used to go to the Gary and Mary West Wellness Center for meals but not for other activities, so its shutdown didn’t affect him much.

Still, life has been more boring this year, he said.

“There ain’t really much to do,” he said. “I go out and take walks, but that’s about it. I used to like to take off and go all over the place, but ain’t nothing open no more, hardly.”

Margarita Morales, 64, lives at the Peachtree Inn and said the shutdown has been especially frustrating for her mother, 91, who lives with her and used to like to go shopping.

“I used to take my mom out,” she said. “We used to go out and eat. We can’t do that anymore. Now we can memorize this room by heart. I can close my eyes and know where everything is at.”

Morales said she bought beads for her mother to make bracelets as a way of keeping busy. Looking forward to cooking a turkey for Thanksgiving, she thought of how things could be worse.

“I’m thankful no one in my family has gotten the coronavirus, and I’m thankful for having a roof over my head and clothes on my back,” she said.