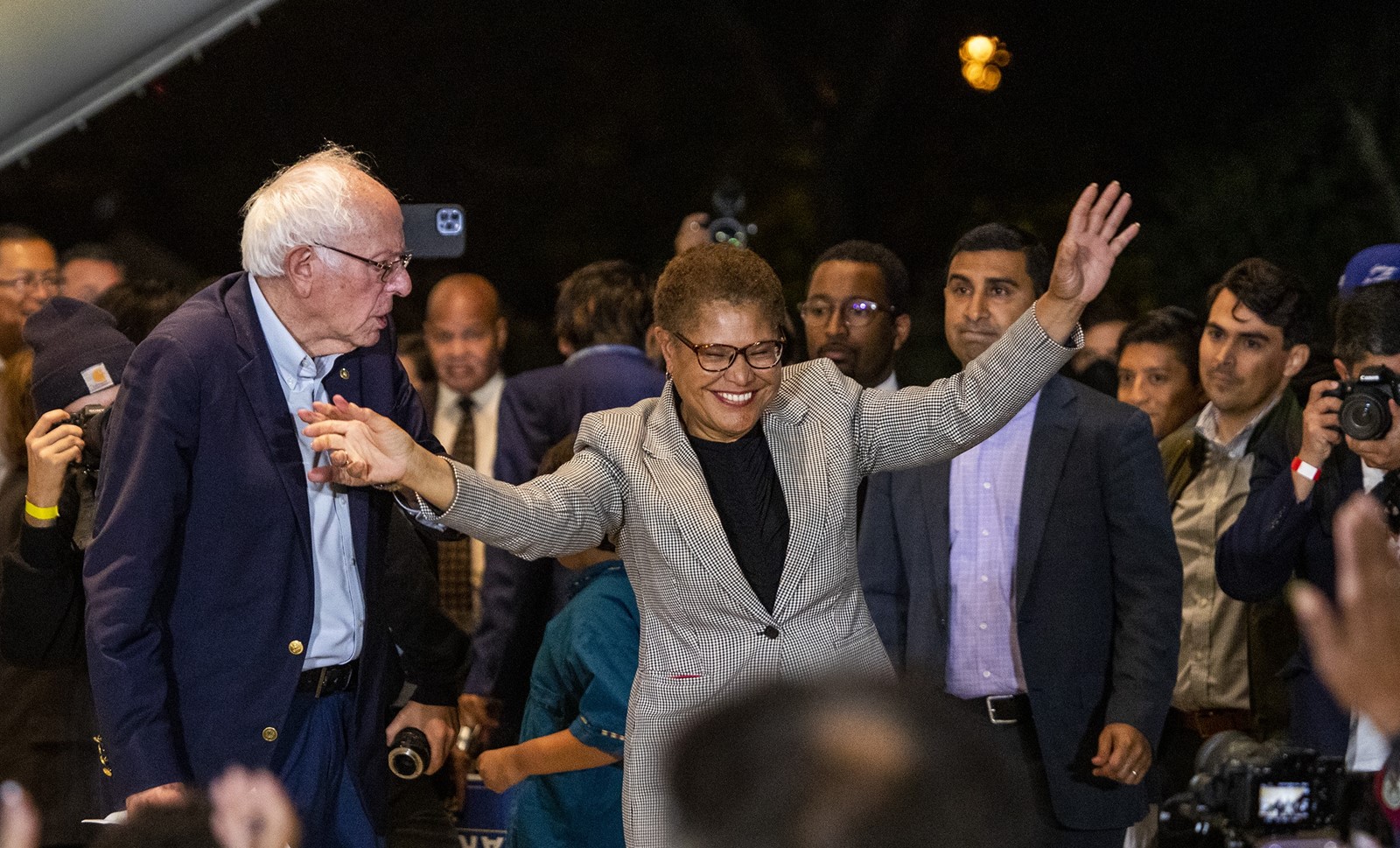 The race for mayor of Los Angeles was tightening rapidly as it entered its final week, with Rick Caruso cutting deeply into Rep. Karen Bass’ lead, putting him within striking distance in the contest to run the nation’s second-largest city.

Bass continues to hold an edge, 45% to 41% among likely voters, with 13% saying they remain undecided, according to a new UC Berkeley Institute of Governmental Studies poll, co-sponsored by The Times. But Bass’ advantageis within the poll’s margin of error and strikingly smaller than the 15-point margin she held a month ago.

Support for Bass, a longtime elected official, has not significantly declined — she maintains strong backing among key groups of voters, including women, liberals and registered Democrats.

But Caruso, a billionaire businessman and developer, has steadily gained ground as previously undecided voters have made up their minds. His push has been powered by tens of millions of dollars spent on attack ads that appear to have succeeded in raising doubts about Bass in many voters’ minds.

He has maintained big advantages among the relatively few conservative and Republican voters in Los Angeles while also opening up sizable leads among Latinos, moderates and people living in the San Fernando Valley.

Bass leads across the rest of the city, relying on the electorate’s polarized view of Caruso, the backing of the state’s Democratic establishment and the liberal tilt of the city’s electorate. She leads among both white and Black likely voters, the poll found.

The survey comes on the heels of several other public and private polls that have shown significant tightening in the contest.

“This race could go either way,” said Tommy Newman, senior director at United Way of Greater Los Angeles, who is working with a coalition to pass a housing tax measure on the November ballot and is a close watcher of local politics.

“Nobody has this in the bag. There has been tremendous movement with Latino voters. The question is, will that correlate into votes?” Newman said. "[Caruso] is probably running the most robust field campaign we have ever seen in a mayor’s race. In a tight race, that’s when field campaigns matter.”

The tightening of the race has come during a period when the mayoral campaign has been somewhat overshadowed by the scandal that began with a leaked audio recording of three City Council members and a labor leader making racist remarks during a discussion last year about drawing new city council district boundaries.

The resulting furor has focused attention on racial and ethnic tensions in the city. The poll found that 69% of registered voters said relations among various racial and ethnic groups were just fair or poor, while just 23% said they were excellent or good.

The survey doesn’t, however, show a clear impact from the scandal on the mayoral race.

Bass and Caruso called for everyone involved in making racist comments to resign. They also each used the moment to make points they’d been pushing throughout the campaign.

For Caruso the scandal reflected a continuation of what he sees as the corruption that’s run rampant at City Hall and spoke to the need for an outsider to clean up city government. Bass said the scandal offered a moment for the city to come together and talk about its divisions while finding avenues to bridge them.

The poll found that voters who put a high priority on building coalitions among racial and ethnic groups favor Bass.

What clearly has had an effect is Caruso’s money.

With both campaigns now turning to get-out-the-vote efforts, Caruso has spent about $13 million mustering about 300 to 400 door knockers who have fanned out across the city to remind voters about the election. The field operation is designed to spur turnout among people — especially Latino voters — who have shown an interest in Caruso but won’t necessarily cast a ballot unless pushed.

That effort has been aided by the onslaught of advertising. Since the primary, Caruso is slated to spend $26 million on TV, radio and digital ads in the general election through Tuesday. That’s eight times the $3.3 million Bass is scheduled to spend, according to data from media tracking firm AdImpact.

Bass will also be boosted by a number of independent supporters on the airwaves, including unions representing carpenters and electrical workers and a pro-Bass political action committee funded by labor and Hollywood money. Those groups, which can’t legally coordinate with the Bass campaign, plan to spend several million on ads supporting the congresswoman.

A good deal of Caruso’s advertising is in Spanish. Together with the canvassing aimed at Latino voters, that pitch appears to be paying off. In the last Berkeley IGS poll just over a month ago, Bass led among Latino likely voters by 6 points, 35% to 29%; she now trails by 17 percentage points in that group, 48% to 31%. Many of Caruso’s Latino supporters, however, don’t routinely vote in every election, making turnout a challenge for him.

“You got to give Caruso a lot of credit. He’s making big inroads into this segment, but they’re not regular voters,” said Mark DiCamillo, who directed the poll and has been surveying California voters for decades.

“He’s making inroads where he didn’t have those inroads in June” in the primary, DiCamillo said. “The whole question is, will it be enough? It’s definitely going to be close.”

Bass’ biggest advantage remains her overwhelming support among liberals — the voters who define the shape of Los Angeles’ electorate.

In recent elections, liberal voters powered Sen. Bernie Sanders (I-Vt.), who campaigned with Bass last week, to victory in Los Angeles during the Democratic primary in 2020 and propelled progressive candidates to the fore in this year’s primary.

If their sway holds, Bass will likely win.

Those liberal voters are the bulwark that could block further growth of Caruso’s support in the San Fernando Valley, where he now leads by 9 points (45% to 36%). Bass remains ahead in every other part of the city by nearly 20-point margins. The one exception is the South L.A. and Harbor region, where Bass leads 48% to 43%.

“It’s problematic for Caruso,” said Ange-Marie Hancock Alfaro, political science professor at USC. Bass “has her base of support. We’ll see if the structural advantage for Bass holds.”

In the last several weeks, the campaign has featured a volley of attacks on issues including each candidate’s ties to USC. Caruso has lambasted Bass for taking a $95,000 scholarship to attend a graduate program, while Bass has attacked him for his involvement in the response to a sexual misconduct scandal.

But Caruso’s ads have been far more frequent. Their effect can be seen in the rise in the share of voters who have an unfavorable view of Bass and in an erosion of her standing among registered Democrats.

About half the electorate still has a favorable view of Bass, but the share of likely voters who see her unfavorably is up 10 points since September to 35%.

Among Latino voters, one-third now have an unfavorable view of Bass, compared with one-sixth in September.

Bass continues to have a more favorable image than Caruso, however. In the current survey, 43% view him favorably and 42% unfavorably, compared with 38% to 40% last month.

Caruso has gained some support among Democrats, who make up the majority of Los Angeles voters. In September, just 19% of Democratic likely voters backed him. Now, 28% do. That’s still much less support than Bass, who is backed by 56% of Democrats, with 14% undecided, but it represents a significant inroad by the businessman, who was a Republican much of his life and only changed his party registration to Democrat in January.

About 20% of voters surveyed had already voted. Caruso had a slight lead among them — 49% to 46%. He also leads heavily among voters who said they planned to cast ballots in person on election day. Bass was doing much better with voters who plan to mail or drop off their ballots, leading 50% to 33% among them, the poll found.

Beyond the negative ads, the central policy arguments of the race have been over homelessness and public safety. These two issues along with the economy and education are what voters say the next mayor must prioritize.

Addressing climate change and coalition building between people of different racial and ethnic backgrounds are seen as less important by most voters, although they are top priorities for Bass’ backers.

The Berkeley IGS poll was conducted Oct. 25-31 among 1,437 Los Angeles registered voters, of whom 1,131 were deemed likely to vote in the November election. The sample was weighted to match census and voter registration benchmarks.