What the president says, and what the facts show 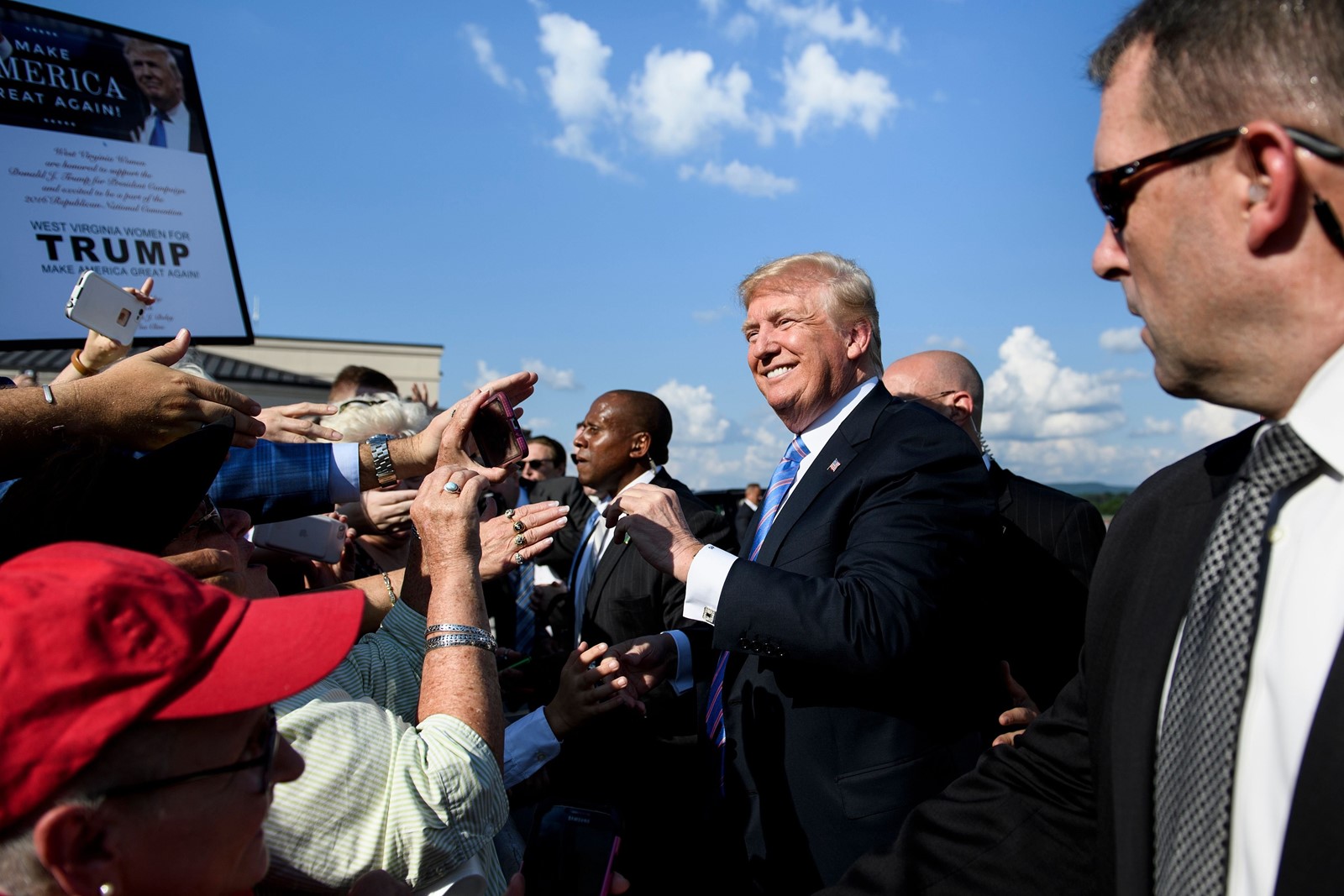 His tax cuts have helped stoke additional growth in an economic expansion that was already approaching its 10th year. The additional growth is largely fueled by government borrowing, as the federal deficit rises because of the tax cuts. The pace of growth is expected to taper off after next year, according to the Congressional Budget Office, the Federal Reserve and outside analysts.

And while the $1.5 trillion worth of tax reductions over the next decade are substantial, they’re far from the largest in U.S. history as a share of the overall economy. The Trump tax cuts rank behind President Reagan’s in the early 1980s, post-World War II tax cuts and at least several more, according to the Committee for a Responsible Federal Budget, which advocates for deficit reduction.

Trump’s economic achievements built on the progress started under President Obama. The 3.8% unemployment rate and the historically low level of requests for jobless aid are both the result of a steady and gradual recovery from the worst economic meltdown since 1929.

Several hundred companies responded to the tax cuts by paying workers bonuses or increasing hourly wages, but any significant income growth has yet to surface in the overall economy.

The tax cuts have added on average $17 a month to people’s incomes, according to an analysis by Ernie Tedeschi, head of fiscal policy analysis at the investment firm Evercore ISI and a former Treasury Department economist. The analysis is based off consumer spending, income and inflation data released Friday.

“As the economy gears up, more people working, better jobs and careers, those revenues come rolling in, and the deficit, which is one of the other criticisms, is coming down, and it’s coming down rapidly.”

No, the deficit is not falling.

Since the fiscal year started in October, Treasury Department reports show the federal government has recorded a $385.4-billion deficit, a 12% jump from the same period in the previous year.

The Congressional Budget Office was even more blunt in a long-term assessment released last week.

It estimates that the national debt — the sum of yearly deficits — will be $2.2 trillion higher in 2027 than it had previously forecast, largely a consequence of Trump’s 10-year, $1.5-trillion tax cuts. The size of the debt could be even higher if provisions of the tax cuts that are set to expire are, instead, renewed.

“The liberal left, also known as the Democrats, want to get rid of ICE, who do a fantastic job, and want open borders. Crime would be rampant and uncontrollable! Make America great again.”

“Crime, crime, crime happens automatically when you have those open borders. The Democrats want to let the country be overrun. Just take a look at what’s going on — everybody comes in including the vile gang MS-13.”

“Without this action by Congress, lawlessness at the border will continue, which will only lead to predictable results — more heroin and fentanyl pushed by Mexican cartels plaguing our communities, a surge in MS-13 gang members, and an increase in the number of human trafficking prosecutions.”

It’s inaccurate for Trump and his administration to assert that weak immigration enforcement is leading to “rampant” crime. Nor is there evidence of a “surge” in MS-13.

The Justice Department has said there are about 10,000 MS-13 members in the U.S., the same number as more than a decade ago. MS-13 accounts for less than 1% of total U.S. gang membership.

Formed in Los Angeles in the 1980s by El Salvador refugees and more recently expanded in Central America, the group is indeed linked to a high number of homicides in certain parts of the U.S. Even so, an FBI report put the group well behind other gangs for crimes on the Southwest border — seventh of 12 — with the Surenos, Barrio Azteca and Tango Blast ranked in the top three.

Trump suggests that weak border enforcement is contributing to crime committed by MS-13. But the gang actually has many U.S.-born members at this point — people who by virtue of U.S. citizenship can’t be denied entry based on their nationality, or deported. The government has not said recently how many members it thinks are citizens and immigrants.

More broadly, Trump overgeneralizes about people who arrive illegally in the United States. Several studies have shown that immigration does not lead to increased crime.

“Russia continues to say they had nothing to do with meddling in our election! Where is the DNC server, and why didn’t Shady James Comey and the now disgraced FBI agents take and closely examine it? Why isn’t Hillary/Russia being looked at? So many questions, so much corruption!”

“When is Bob Mueller going to list his conflicts of interest? Why has it taken so long? Will they be listed at the top of his $22,000,000 report. And what about the 13 angry Democrats, will they list their conflicts with Crooked H?”

Trump repeats Russia’s denial that it had meddled in the 2016 election, even though the U.S. intelligence community determined that Russia indeed intervened to help Trump. Many Republicans and Democrats have said they accept the findings of the intelligence assessment, including Secretary of State Michael R. Pompeo.

The Senate Intelligence Committee said in May it had uncovered no reason to dispute the conclusions of the intelligence assessment released in 2017. Sen. Richard M. Burr (R-N.C.), chairman of the committee, said his staff spent 14 months “reviewing the sources, tradecraft and analytic work” conducted by the intelligence agencies in accepting its conclusion.

Trump also refers to special counsel Robert S. Mueller III’s team as “13 angry Democrats,” but Mueller is a Republican and some others on his team owe their jobs largely to Republican presidents. Some have indeed given money to Democratic candidates over the years. But Mueller could not have barred them from serving on that basis because regulations prohibit the consideration of political affiliation for personnel actions involving career attorneys. Mueller reports to Deputy Atty. Gen. Rod Rosenstein, a Trump appointee.

“When we won the state of Wisconsin, it hadn’t been won by a Republican since Dwight D. Eisenhower in 1952. Did you know that? And I won Wisconsin.... And Ronald Reagan, remember, Wisconsin was the state that Ronald Reagan did not win.”

He’s wrong. Eisenhower won the Badger State, in 1952 as well as 1956, but so did Reagan in the 1980 and 1984 presidential elections. Wisconsin also helped elect Republican Richard Nixon to the White House in 1968 and 1972, and gave him its backing as well in 1960, when Democrat John F. Kennedy won the presidency.

“We’ve eliminated horrible policies that burdened young Americans. You were burdened by things that were really, in some cases, insurmountable, including the individual mandate in Obamacare. A disaster. That’s where you pay a lot of money for the privilege of not buying health insurance. Right? One of the worst things. It’s gone.”

Federal studies have found the Affordable Care Act’s popular provision requiring employers and insurers to keep young adults on parental coverage until age 26 — rather than the customary 19 — has helped millions of young people transitioning from school to work, or trying to start a career.

Since 2010, when the new provision went into effect, the number of those 19-25 who were uninsured fell by more than half, to 4.5 million last year.

Regarding the individual mandate, though Congress did repeal the requirement that most Americans carry insurance or risk a tax penalty, that doesn’t take effect until next year.

Other major parts of the Obama-era overhaul remain in place, including its Medicaid expansion, protections for people with pre-existing conditions, guaranteed “essential” health benefits, and subsidized private health insurance for people with modest incomes.

“The vets would be in line for 13 days, 18 days, three weeks, seven days and they’d start off and they wouldn’t be in bad shape. And sometimes it would take so long before seeing a doctor that they would be terminally ill....Why don’t they just go to a doctor — local — that’s looking for the business? ...We got it done. I signed it.”

No, fulfilling his campaign promise of reducing wait times by giving veterans access to private-sector care is not done.

Trump signed into law last month a bill that would ease restrictions on private care. But its success in significantly reducing wait times for appointments depends in large part on an overhaul of the Veterans Affairs Department’s electronic medical records to allow for a seamless sharing of records with private physicians. That overhaul will take at least 10 years to be complete.

Only veterans who endure waits of at least 30 days — not “13 days, 18 days, three weeks, seven days” — for an appointment at a VA facility are eligible to receive care from private doctors at government expense. Under a newly expanded Choice program that will take at least a year to implement, veterans will still have to meet certain criteria before they can see a private physician.

A recent Government Accountability Office report found that despite the Choice program’s guarantee of providing an appointment within 30 days, veterans waited an average of 51 to 64 days.