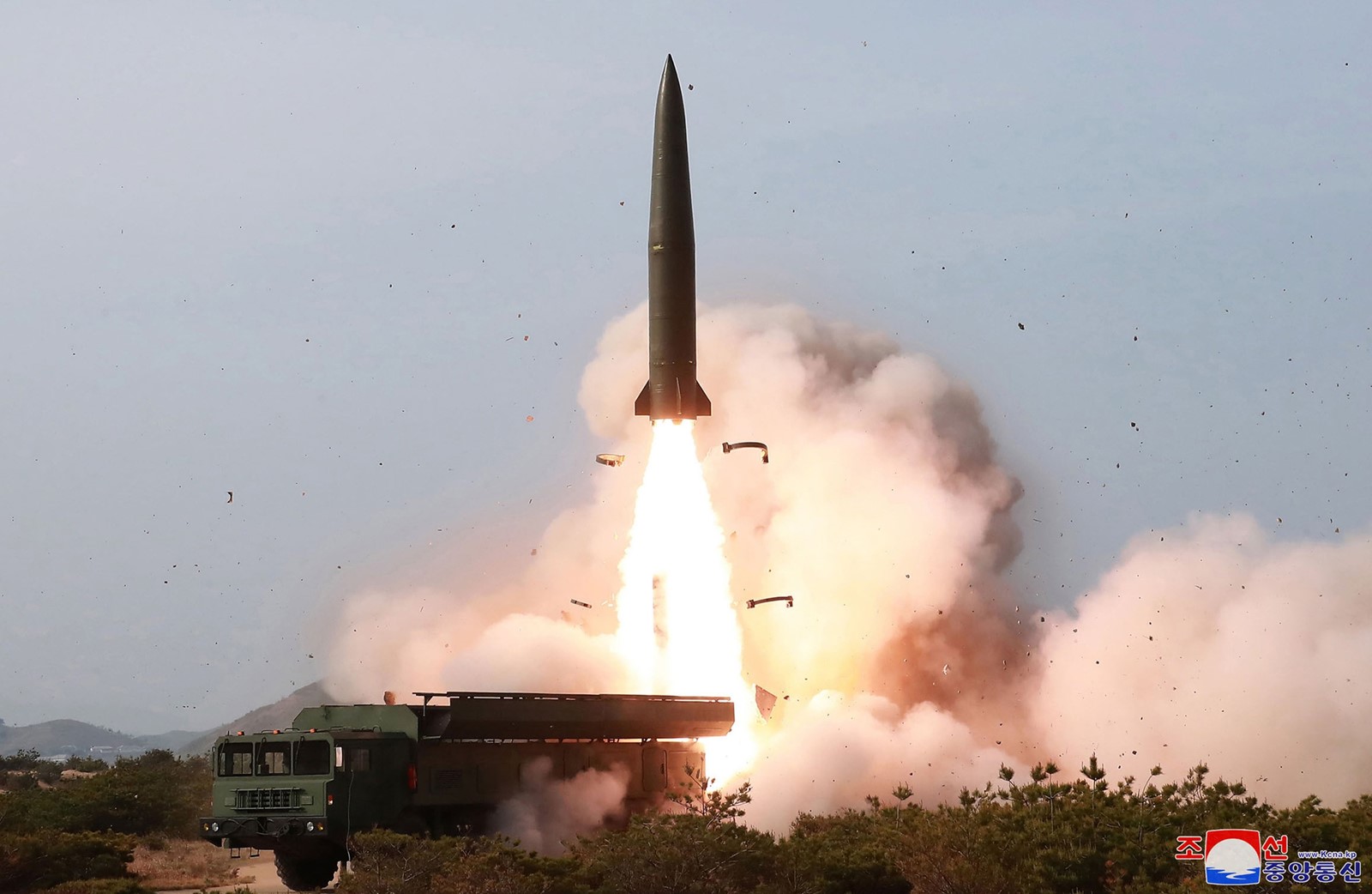 A PHOTO provided by North Korea on May 4 shows a missile launch. A senior U.S. official said of the missile tests: “This is their way of saying, ‘We have an advanced weapons program that’s continuing to do new and different things. Now let’s get back to negotiating.’ ” (Korean Central News Agency)
PREVIOUS IMAGE

A newly tested North Korean short-range ballistic missile appears to be a copy of an advanced Russian design that could greatly improve Pyongyang’s ability to evade U.S. missile defense systems, according to U.S. officials.

President Trump, who has sought unsuccessfully for the last year to persuade North Korean leader Kim Jong Un to give up his nuclear weapons, has dismissed the new missile as “very standard stuff.” But military and national security officials see a potential threat to U.S. forces and allies in northeast Asia.

Three of the missiles were test-fired on May 4 and May 9 from northwestern North Korea. They flew on a low trajectory, never exiting the Earth’s atmosphere, and flew about 180 miles before plunging into the Sea of Japan, also known as the East Sea.

Pictures showed the missile closely resembles a short-range Russian missile called the Iskander, right down to the solid fuel engine and four fins on its tail for making in-flight course adjustments. The similarities are so strong that some experts dubbed Pyongyang’s version “the Kimskander” after the tests.

A low-flying missile with a satellite guidance system, as the North Korean missile appears to have, is potentially far harder for U.S. antimissile systems deployed in South Korea to intercept, said the officials, who spoke on condition of anonymity to discuss internal assessments.

The weapon also could be hard to destroy on the ground because it relies on a mobile launcher that carries two missiles and can be moved. It is probably more accurate than North Korea’s aging arsenal of short-range Scud missiles.

The tests appeared aimed at increasing pressure on the White House to resume negotiations that stalled after a Trump-Kim summit in February failed to make any progress on getting Kim to abandon his nuclear arsenal and weapons production facilities.

“This is a missile designed to evade” countermeasures, said a senior U.S. official familiar with assessments of the North Korean test launch. “This is their way of saying, ‘We have an advanced weapons program that’s continuing to do new and different things. Now let’s get back to negotiating.’ ”

A new version of the Patriot interceptor missile defense system in South Korea could hit the missile in mid-flight. But if Pyongyang fired several at once, it could overwhelm the system, a U.S. official said.

On the recent flight test, the missiles never exceeded an altitude of about 30 miles high, according to a statement by the South Korean joint chiefs of staff. That means for most of its flight, the missile flew too high for all but the most advanced Patriot interceptors and too low to be hit by THAAD, according to experts.

For his part, Trump downplayed the potential threat and the signal it represented from Kim, insisting the tests did not violate Kim’s pledge last year to halt intercontinental- and medium-range missile and nuclear weapons tests while negotiations are underway.

“They’re short range and I don’t consider it a breach of trust at all,” Trump told Politico last week. “I don’t think they’re ready to negotiate,” he added.

Trump defends his talks with Kim, arguing that the test pause has eased tensions with Pyongyang, at least for now. And some missile experts and diplomats say the White House is right not to overreact to the latest provocations from Pyongyang.

But U.S. intelligence officials say Kim has little intention of fully giving up North Korea’s nuclear and missile programs and is likely to ramp up testing again if the U.S. doesn’t agree to ease punishing economic sanctions in exchange for other concessions.

“What we’re getting now is just a light taste” of Kim’s response if no deal is reached by the end of this year, said Joshua Pollack, a North Korea missile expert at the Middlebury Institute of International Studies at Monterey.

U.S. intelligence officials and outside experts have pored over data since the tests to try to understand the new missile’s capabilities.

It’s unclear how many missiles Pyongyang has produced and how closely their capabilities match those of the Russian Iskander, which is capable of carrying a nuclear warhead and has a range of 250 to 500 miles.

One of the mysteries is how Pyongyang produced a missile so similar to the Iskander, which Moscow is prohibited from selling to North Korea under United Nations sanctions.

Some experts believe Pyongyang illicitly acquired one of the Russian weapons from one of Russia’s allies and copied it. Moscow has sold a version in the last decade to Syria, Armenia and Algeria. It’s also possible that North Korea produced the weapon with secret help from Russian weapons scientists, or that it bought or stole blueprints for one.

“I don’t think the Russian government would sell this to North Korea, but it’s possible they used illicit trade networks, maybe using a third party,” said Michael Elleman, a former weapons scientist now at the International Institute for Strategic Studies, a London-based think tank. “It’s also possible they stole the design for it.”

North Korean pictures show support bands around the missile flying off during the launch in an almost identical configuration to the Iskander, evidence that is “compelling and fully consistent” with the Russian missile, Elleman wrote for 38 North, a nonprofit research group and website focused on North Korea.

David Shlapak, a senior defense researcher at the Rand Corp., said he did not discount North Korea’s receiving direct help from Moscow, which has assisted Pyongyang for decades with its missile programs.

“I’m not certain why it would be surprising if the Russians did indeed collude in the provision of a small number of Iskanders,” he said. “Pyongyang might have gotten its hands on a small number of missiles, mainly as sources or templates for technology and reverse engineering, and decided to burn” several in the tests.

Two of the missiles were displayed on their mobile launcher in a military parade in Pyongyang in February 2018, but they appeared to be mock-ups.