L.A. beaches are open — sort of

Despite strict new rules, beachgoers are doing things their own way. 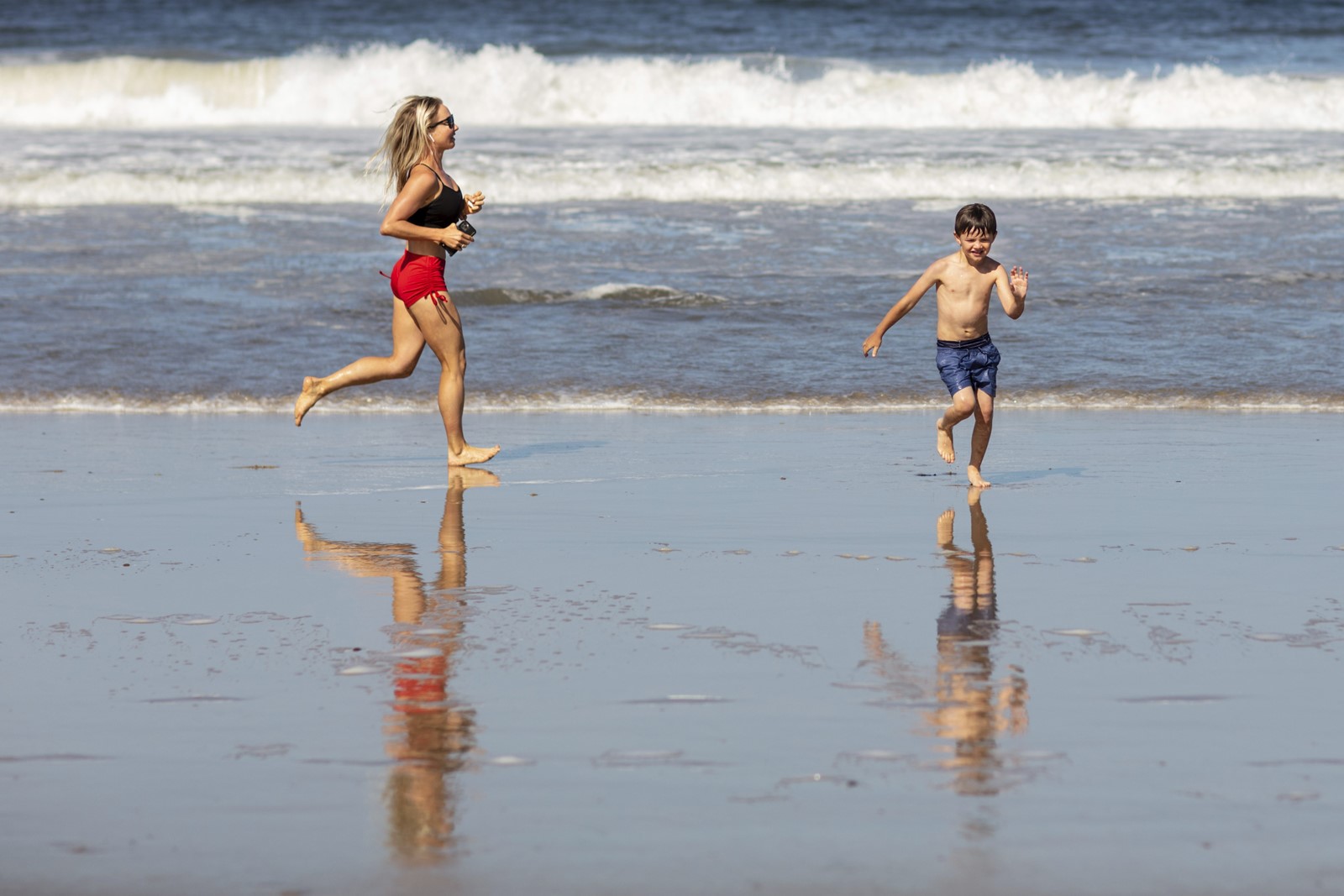 when the red tide was at its peak, crowds descended on Venice Beach, which was closed because of the coronavirus. They had come to watch the electric blue waves roll in.

I was among the scofflaws.

The chance to see bioluminescence seemed worth some rule-breaking.

One night, while we were viewing the show, an officer on an ATV rode up and politely told us the beach was closed. We grumbled under our breath, and left.

The next night — because those illuminated waves were like sirens calling us to the rocks — we were back. This time, the police were not as polite. An LAPD helicopter swept the beach — back and forth — strafing us with its blinding spotlight.

I should have felt guilty. Instead, I was exhilarated. After that, though, I stayed home.

Last week, Los Angeles Mayor Eric Garcetti softened his “Safer at Home” order. Beaches are now open to swimmers, surfers, runners and walkers, but passive activities like sunbathing are still banned. Exercise is essential, I guess, tanning not so much.

“Failure to comply with this order,” wrote the mayor, “shall constitute a misdemeanor subject to fines and imprisonment.”

That’s right: the penalty for sunbathing could be a fine of up to $1,000, imprisonment for up to six months, or both. Also, masks are mandatory.

To say I am conflicted is an understatement. On one hand, social distancing measures appear to be working, but so far in Los Angeles, we have only been able to flatten the curve, not bend it.

We surely don’t want Huntington Beach-style crowds, or protesters demanding the right to infect each other with the coronavirus, I mean, their freedom.

On the other hand, is it really dangerous for a person to sit alone on the beach? Is there some reason people have to keep moving?

On Thursday afternoon, I went down to the beach to see whether people were complying with the new rules — and whether the city was enforcing them.

The beach was lightly populated. A handful of surfers were in the water (allowed under the new rules). Kids built sand castles at the water’s edge (debatable). And dozens of small groups sunbathed on the beach or shared picnics on the sand (definitely not allowed).

None of the illicit sunbathers I encountered seemed to care that they were violating the new order. Some sat a few feet apart from one another, but none wore a mask.

“As long as we have access to our fun stuff, like the beach, we feel OK,” said Tate, 31, who was sitting on the sand with his friend Martin, soaking up the rays. “But the underlying issue is that Americans don’t have any control right now.”

Up the beach, I found Diana Butova, who sat on a towel close to her friend Anastasia Mikhailuk, 24, a student at Santa Monica College.

“You have such peace of mind on the beach,” Butova said.

“The healing air, it’s so nice,” Mikhailuk added. She disputed the idea that sitting in one place was unsafe. “We’re safer sitting here together than if we were standing and walking around.”

Behind them, a pair of LAPD officers roamed the beach in a small all-terrain truck, lights flashing, but they didn’t approach.

I flagged down the officers to ask what, exactly, they were doing.

Putting up signs announcing the new rules, they said, and just making their presence known.

Not ticketing scofflaw sunbathers? No, they said, they weren’t giving citations, because they don’t have the paperwork yet.

“Are people being nice to you?” I asked. “Are they ever?” asked one of the officers sardonically.

To tell the truth, the policing of Venice Beach has been inconsistent since the shutdown began. The parking lots are locked, yet plenty of people made their way to the sand even before the new rules.

Enforcement has been lax — far too lax for some Venice residents.

One local, Whit Washing, was so distressed by the crowds and lack of masks that he wrote a letter to the mayor and Councilman Mike Bonin pleading for police to issue tickets.

“People are stupid, vain and selfish,” wrote Washing, in an email he shared with me. “PLEASE do not let Venice become a national disgrace of a hot spot. Because, I promise you, it will when the beaches open, if you do not enforce mask wearing and social distancing.”

An aide to Bonin responded sympathetically, but acknowledged that “currently there are no fines or other means of enforcement being implemented ... within the city of Los Angeles.”

Early Friday morning, I walked to the Cow’s End, a beloved Venice Beach coffee joint that is a hangout for a crew of early-morning surfers. I wanted to know how they felt about the new beach rules.

“Doesn’t matter to us,” said my friend Jay Resnick, 60. “We never stopped surfing in the first place.”

For the past two months, he said, surfers had an unspoken pact with the lifeguards: As long as they were out of the water by 9:30 a.m., lifeguards wouldn’t hassle them.

After spending the afternoon talking with beachgoers, I still felt conflicted about the new rules.

As the days grow hotter, it’s going to be harder to keep people off the sand. What little schooling is going on right now is going to be over in a month. Families will need a break. How will we balance the need for fresh air and cool water with the need to stay apart? I have no good answers.

But the ocean stretched in front of me, and the sun was just starting toward the horizon. I walked to the water, took off my mask, and stared west as the waves washed against my legs. God, it felt good.

For a fleeting moment, life felt — if not under control — then at least normal.