As cases drop and immunity grows, signs of hope emerge

Conditions are ripe for virus spread to continue to decline as spring approaches. 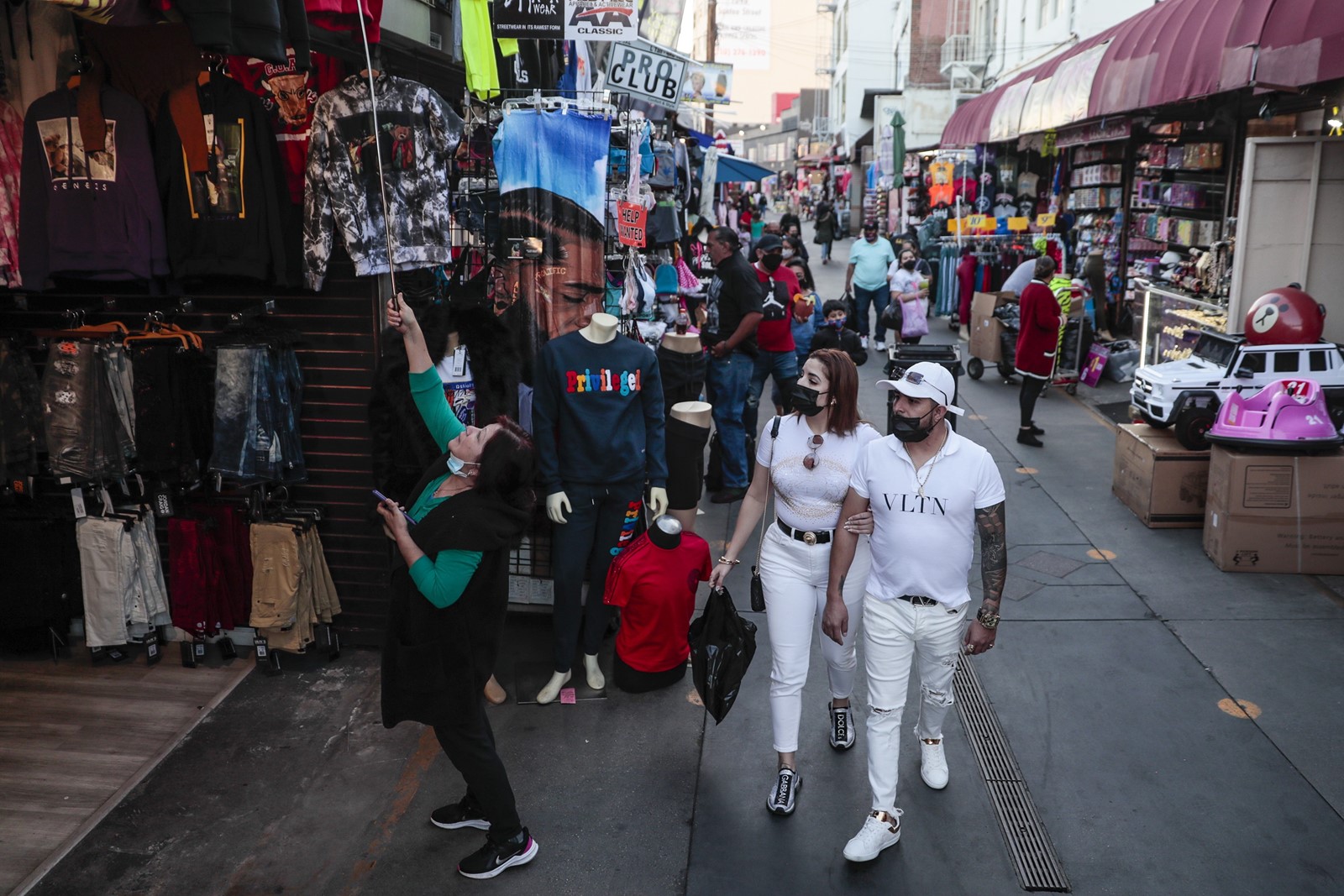 “I could be wrong, but I don’t think we’re going to see a big fourth surge,” said Dr. Paul Offit, a vaccine expert at Children’s Hospital of Philadelphia. “I think we’ve seen the worst of it.”

Many epidemiologists and other scientists, while still cautious, say they feel increasingly hopeful that the rest of 2021 will not replay the nightmare of last year.

The arrival of spring will likely aid the ongoing precipitous drop in coronavirus cases, as warmer weather allows people to spend more time outdoors and creates a less hospitable environment for the virus, experts say.

But the biggest factor, paradoxically, is something the nation spent the last year trying to prevent.

While 12% of Americans have received at least one dose of the COVID-19 vaccine, far more people — approximately 35% of the nation’s population — have already been infected with the coronavirus, Offit estimated. Studies have found that people who survive COVID-19 have immunity for several months, though it likely lasts even longer.

UC San Francisco epidemiologist Dr. George Rutherford said one of the reasons why cases are dropping so fast in California “is because of naturally acquired immunity, mostly in Southern California.” He estimated that 50% of Los Angeles County residents have been infected with the virus at some point.

“We’re really talking something starting to sound and look like herd immunity — although that true herd immunity is a ways off in the future,” Rutherford said recently.

Herd immunity is reached when so many people have immunity that a virus cannot find new hosts and stops spreading, resulting in community-wide protection. Scientists believe that in the case of the coronavirus, the threshold could be as high as 90%. The United States has not met this threshold, but each step toward it slows transmission, experts say.

The effects may be greatest in places that endured the worst COVID-19 surges, including Los Angeles. After a horrific autumn and winter wave that has killed more than 12,000 people, an estimated 33% to 55% of county residents have already been infected with the coronavirus, according to USC researchers.

Those past infections have blunted transmission of the coronavirus so significantly that they have changed the current trajectory of the outbreak in L.A. County, where new daily cases have been falling for five weeks, said Dr. Roger Lewis, director of COVID-19 hospital demand modeling for the L.A. County Department of Health Services.

“If you had the exact same behavior and type of virus circulating that we have right now, but we were at the beginning of the pandemic and no one was immune yet ... we’d be in the midst of an ongoing surge,” he said. “The fact that cases are going down right now, as opposed to going up, is because approximately a third of everybody in Los Angeles County is immune to COVID.”

But experts caution that the battle is not yet won.

New coronavirus variants could undermine these projections, either by proving more resistant to existing vaccines or by finding a way to spread more easily. Shifts in behavior could also render this good news moot, since people need to stick to precautions they have been taking, experts say.

“I don’t want to provide a false sense of assurance here,” said L.A. County chief science officer Dr. Paul Simon, who pointed out that 60% of Angelenos would remain vulnerable even if more than a third have already been infected with the coronavirus. “Unless they’ve had vaccination, they continue to be susceptible. I think we need to continue to be vigilant.”

Nationwide, coronavirus cases have dropped to levels not seen since late October, according to federal officials. In California, approximately 7,000 people are testing positive for the coronavirus each day, compared with 45,000 at the peak of the state’s winter surge.

In L.A. County, officials currently estimate the R value — a measure of how many people a person with the virus goes on to infect — to be around 0.8. Anything below 1 means an outbreak is shrinking, and anything above 1 means it’s growing.

If so many people in the county weren’t already immune, the R value would be about a third higher, or just above 1, Lewis said. Even that slight increase has major consequences for a virus prone to spreading exponentially.

“The fact that the virus only has two-thirds as many people to jump to as it did early on slows it down,” Lewis said.

Since the pandemic began, nearly 30 million Americans have tested positive for the coronavirus, but the true number who have contracted the virus is likely three or four times higher due to low levels of testing and the fact that many people who are infected never develop symptoms, experts say.

The large number of infections has come at a high cost. The nation’s death toll is approaching 500,000, far greater than any country in the world, and even more have survived but continue to suffer lingering effects of their illnesses, some of them severe. Allowing COVID-19 to run rampant to quickly achieve herd immunity, as some had promoted early in the pandemic, would have led to even more deaths and chronic health problems, experts say.

It remains unclear exactly what the threshold for herd immunity is with this virus, with some scientists estimating that herd immunity may be achieved when 50% of people are immune, while others believe the threshold is closer to 90%, said L.A. County’s Simon. The uneven geographical distribution of infections may also leave some pockets of the county more vulnerable than others, he said.

“We don’t know quite yet what level of vaccination and protection would be required to get herd immunity across the county,” Simon said in a briefing Friday. “As we see the number of new cases drop dramatically — that will be I think the best clue that we’re reaching herd immunity, particularly if we see it across the county.”

The biggest obstacle to ending the pandemic is the proliferation of coronavirus variants, especially if they are more transmissible or less susceptible to vaccines. For instance, the B.1.1.7 variant that emerged in Britain is about 50% more contagious than its predecessors and could fuel outbreaks in places where large swaths of people remain vulnerable to disease.

Dr. Peter Hotez, dean of Baylor College of Medicine’s National School of Tropical Medicine, said he thinks that flying to visit friends and family will be normal and safe by August. But because of the variants, he cautioned people to “beware the Ides of March.”

“That’s, I think, the biggest crisis facing us right now in our COVID-19 pandemic,” he said in a recent interview with the American Medical Assn. “As bad as 2020 was, now we’re looking at version 2.0 of this pandemic from the variants.”

But others are more optimistic. Offit said he would be concerned if people who already had COVID-19 or who had been vaccinated were being hospitalized due to infections caused by a new variant.

“That line hasn’t been crossed,” he said. “You just want to keep people out of the hospital, and it looks like to date there’s not a variant that has escaped either disease- or vaccine-induced immunity.”

At a UCSF Department of Medicine COVID seminar last week, Dr. Monica Gandhi, an infectious disease specialist, put it simply: “Try not to worry about the variants.”

Offit said he remains hopeful about the nation’s trajectory through the summer and as more people get vaccinated.

Dr. Rochelle Walensky, director of the U.S. Centers for Disease Control and Prevention, cautioned against viewing the downward case trends as a reason to let up on masking and other safety precautions.

In an interview with the Journal of the American Medical Assn., Walensky said she hoped for the best, but also warned of a worst-case scenario — that people will stop wearing masks and physically distancing too early and that many will prematurely declare they’ve had enough of the pandemic and won’t get vaccinated.

“How this goes is going to depend on 330 million individuals,” Walensky said. “Because while I really am hopeful for what could happen in March and April, I really do know this could go bad — so fast. And we saw it in November. We saw it in December. We saw what can happen.”

Dr. Annabelle de St. Maurice, a pediatric infectious disease specialist at UCLA, said she sympathizes with officials trying to walk a fine line between keeping morale up and not making people feel so optimistic that they led their guard down.

In L.A. in particular, the numbers have improved drastically, she said, but they remain almost as high as they were during the deadly summer surge.

“It is reason to celebrate, and you want people to celebrate it, but you want them to do that physically distanced while wearing a mask,” she said.