Leave Mars to the robots 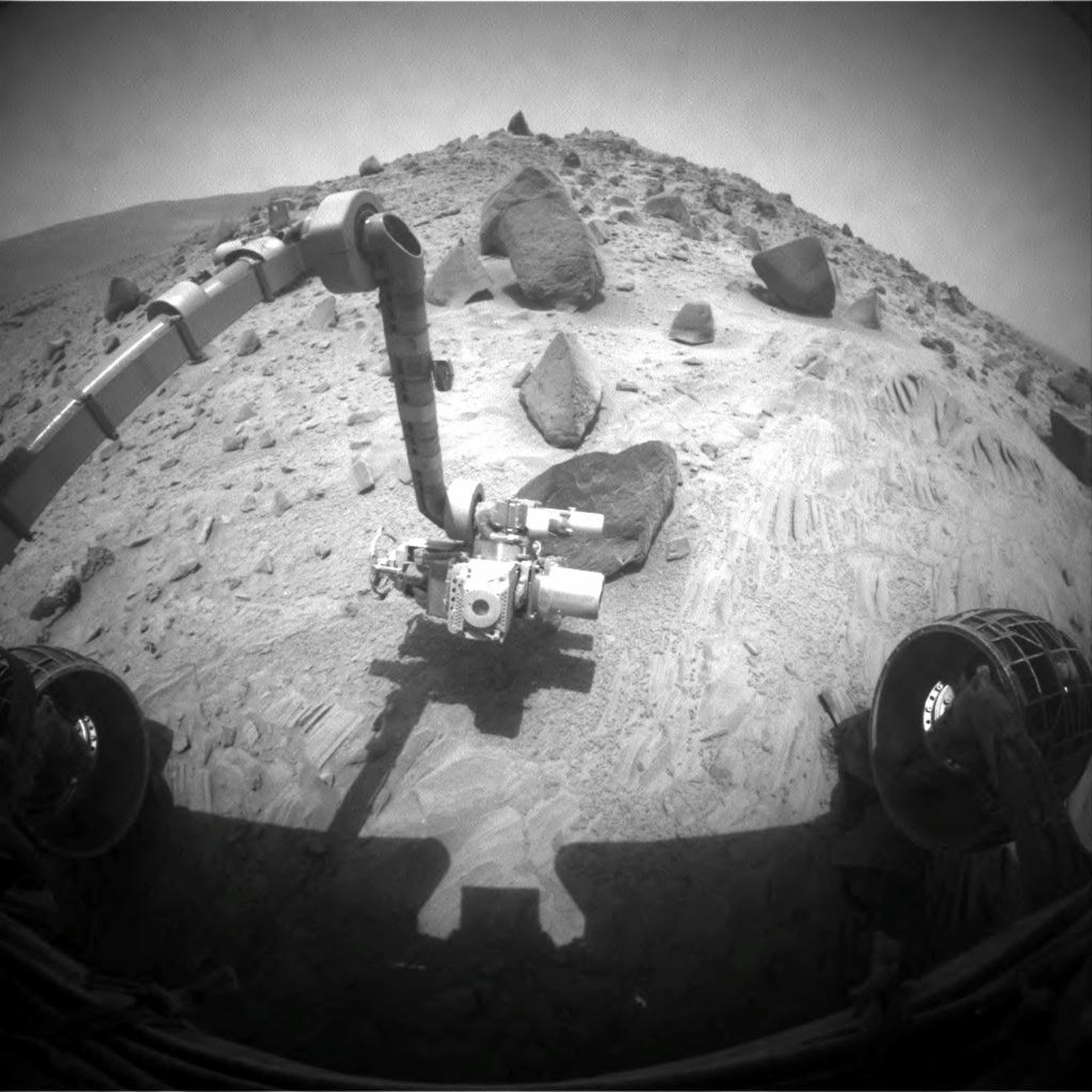 NASA’sSpirit rover in 2007. Until we know whether there’s life on Mars, humans should stay away. ( NASA)
PREVIOUS IMAGE

sends its next mission to Mars on May 5, from Vandenberg Air Force Base near Lompoc, Calif., it will be the first ever interplanetary launch from the West Coast. If skies are clear, Californians from San Diego to Bakersfield will be able to watch an Atlas rocket rise vertically from its launch pad before cutting south and traveling parallel to the coastline.

The mission will be unprecedented in another respect: The rocket will be carrying the first spacecraft dedicated to studying the deep interior of Mars. On Nov. 26, the Mars InSight Lander will touch down on Elysium Planitia — a large, flat plain on the Red Planet’s equator. There, it will listen for marsquakes, measure the rate at which heat flows from the interior of Mars into space, and feel for slight wobbles of the planet as it orbits the sun. The information that InSight sends back will help us understand the planet’s structure and history.

InSight is the latest in a decades-long series of unmanned missions to Mars, but it could be among the last. Our era of robotic explorers may soon give way to a new era of human ones.

Elon Musk has said he plans to send a first wave of colonists to Mars on SpaceX rockets within a decade. NASA is eager to send astronauts to Mars, and may do so by the 2030s. Jeff Bezos has indicated that he will send his Blue Origin rockets to the moon first, but that he also intends to send humans to Mars. And the United Arab Emirates has said it will build a city on Mars by 2117.

All these prospects sound incredibly exciting. Yet everything we know about Mars so far tells us that sending humans to the planet this soon may be a mistake. Indeed, when it comes to colonizing Mars, patience could be an ethical imperative.

The reason: If extraterrestrial life exists, the closest life forms to Earth may very well be on Mars.

Our search for life on Mars has turned up compelling findings. With the Mariner missions in the 1960s, we learned that Mars has a tenuous atmosphere dominated by carbon dioxide, which would be good for plants and anaerobic microbes, though not for us. Measurements made during the Viking missions in the 1970s hinted at the presence of primitive Martian life forms.

Two decades later, scientists studying a meteorite from Mars found evidence that some think suggests the presence of ancient life on the planet. More recently, our robotic explorers have uncovered evidence of an abundance of frozen water, and in 2015, NASA’s Curiosity rover found more methane gas in the Martian air than many scientists think Mars should have — unless microbes are responsible for producing some of that methane.

The evidence for ancient and present life on Mars is controversial and inconclusive at best, but there is no proof that Mars is sterile, either. Both scenarios would carry enormous implications.

It is possible microscopic Martians exist already. Although the planet looks barren and sterile on the surface, it could be home to thriving colonies of subsurface microbes.

And if there subsurface microbes, we might be related. All of life on Earth could conceivably have descended from Martian microbes that caught a ride to Earth on an ancient meteorite and then slowly evolved into our ancestors. This knowledge would tell us that life can survive long journeys in space, perhaps even long journeys from one star system to another.

Alternatively, life on Mars might have no connection to life on Earth. If Martian life is not based on DNA or RNA, genesis happened twice, on two nearby planets orbiting the same star. That knowledge would tell us that life is likely very common in the universe.

If Mars turns out to be uninhabited altogether, that knowledge, too, would be profound. We might be alone in the universe, or far more isolated than many experts currently believe.

This ambiguity presents us with a moral quandary. If we start dropping habitats, greenhouses, food, fuel and people onto the planet’s surface, we will contaminate Mars. We would inject bacteria and viruses into the Martian ecosystem and provide them with places where they could survive and even thrive. Martian life, if it exists, is not likely to outlive an onslaught of terrestrial germs.

So far our contamination of Mars has been limited. Though our rovers and landers may have transported a few terrestrial bacteria to the planet, those bacteria most likely have been destroyed by ultraviolet light and X-rays. The surface of Mars is probably still sterile, at least when it comes to terrestrial contaminants.

Before we go further and send humans to Mars, we need to know if doing so could trigger the extinction of existing life. The InSight Lander mission is therefore an important next step. We need to pay close attention to the discoveries made by the InSight team and to the knowledge we gain from all of NASA’s ongoing Mars research.

We also need to fund many more unmanned missions to Mars. We need to measure the gases in the atmosphere for an extended period of time. We need to lift up rocks and drill into the polar ice. We need to poke around in crevasses and caves. And we need to do all of these things with sterile robots. We need to know if there is life on Mars before we send humans there.