‘I’m with Joe’: Whitman joins others in GOP backing Biden

California billionaire who ran for governor in 2010 is among the speakers at the DNC. 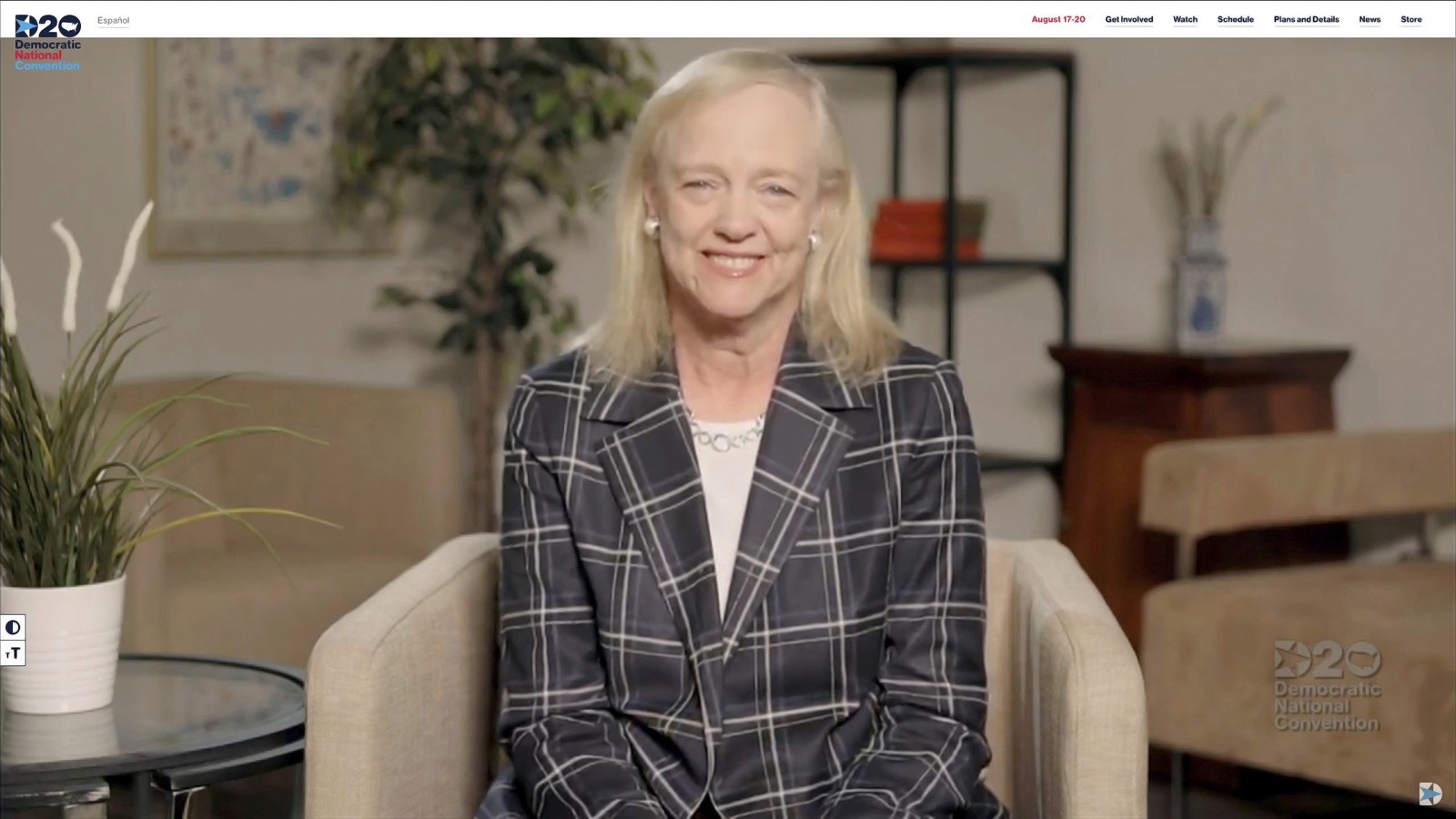 California billionaire Meg Whitman, a Republican who spent $144 million of her own wealth on an unsuccessful run for governor a decade ago, endorsed Joe Biden for president at the Democratic National Convention on Monday.

“I’m a longtime Republican and a longtime CEO. And let me tell you, Donald Trump has no clue how to run a business, let alone an economy,” she said. “Joe Biden, on the other hand, has a plan that will strengthen our economy for working people and small-business owners. For me, the choice is simple. I’m with Joe.”

Whitman was among four Republicans, including former Ohio Gov. John Kasich, who spoke at the nationally televised virtual convention. The move is not entirely surprising since in 2016, Whitman compared then-candidate Donald Trump to Adolf Hitler and Benito Mussolini, and endorsed and contributed to Democratic nominee Hillary Clinton’s campaign.

At the time, the major GOP donor said she felt she had to put country before party because of how dangerous she felt Trump’s candidacy was for the nation.

“Donald Trump’s demagoguery has undermined the fabric of our national character,” she said in August 2016.

But the prospect of Whitman’s appearance at the DNC stunned some Democratic operatives who worked hard against her during the 2010 gubernatorial campaign.

“I would not in a million years have imagined seeing Meg Whitman at a Democratic convention, but I also never imagined I’d be buying extra stamps to try and save the postal service in the midst of a global pandemic,” said Sterling Clifford, who served as Jerry Brown’s campaign spokesman in the 2010 race against Whitman. “The world is full of surprises, I guess.”

Whitman, 64, is a well-known face to California voters because of the record-setting gubernatorial campaign she ran in 2010, the last time Republicans were competitive in statewide contests here.

Worth $3.8 billion, she made much of her fortune as the head of EBay and used her vast personal resources to win the GOP primary over Steve Poizner, himself a wealthy man. Her campaign ultimately spent $178 million, with Whitman’s checkbook providing the bulk of the money.

That made her campaign the most expensive self-financed effort in the country until J.B. Pritzker’s 2018 gubernatorial win in Illinois and then Michael R. Bloomberg’s unsuccessful pursuit of the Democratic presidential nomination this year.

The money created a campaign that was more like a presidential operation, with lushly produced events, an unending barrage of TV advertisements, high-end swag, private jets and a massive roster of highly compensated political consultants.

But the neophyte candidate could not compete with Brown’s threadbare effort, in part because of self-imposed wounds: taking a hard right turn on immigration during the GOP primary, early and sustained negative advertising that battered her likability among voters, the lack of voting for much of her adult life, and, notably, the emergence of a housekeeper who was in the country illegally whom Whitman fired as she prepared to run for governor. Brown ultimately beat her by 13 percentage points.

After the campaign, Whitman became chief executive of Hewlett-Packard, and then in 2018 became CEO of Quibi, Jeffrey Katzenberg’s video-streaming platform.

Rival party appearances at political conventions are not uncommon and tend to be popular with the audience, who view them as a public affirmation that their side is indeed the correct one.

James Brady, President Reagan’s press secretary who was partly paralyzed in the 1981 assassination attempt on Reagan, appeared at the 1996 DNC.