Hoping a blue wave can 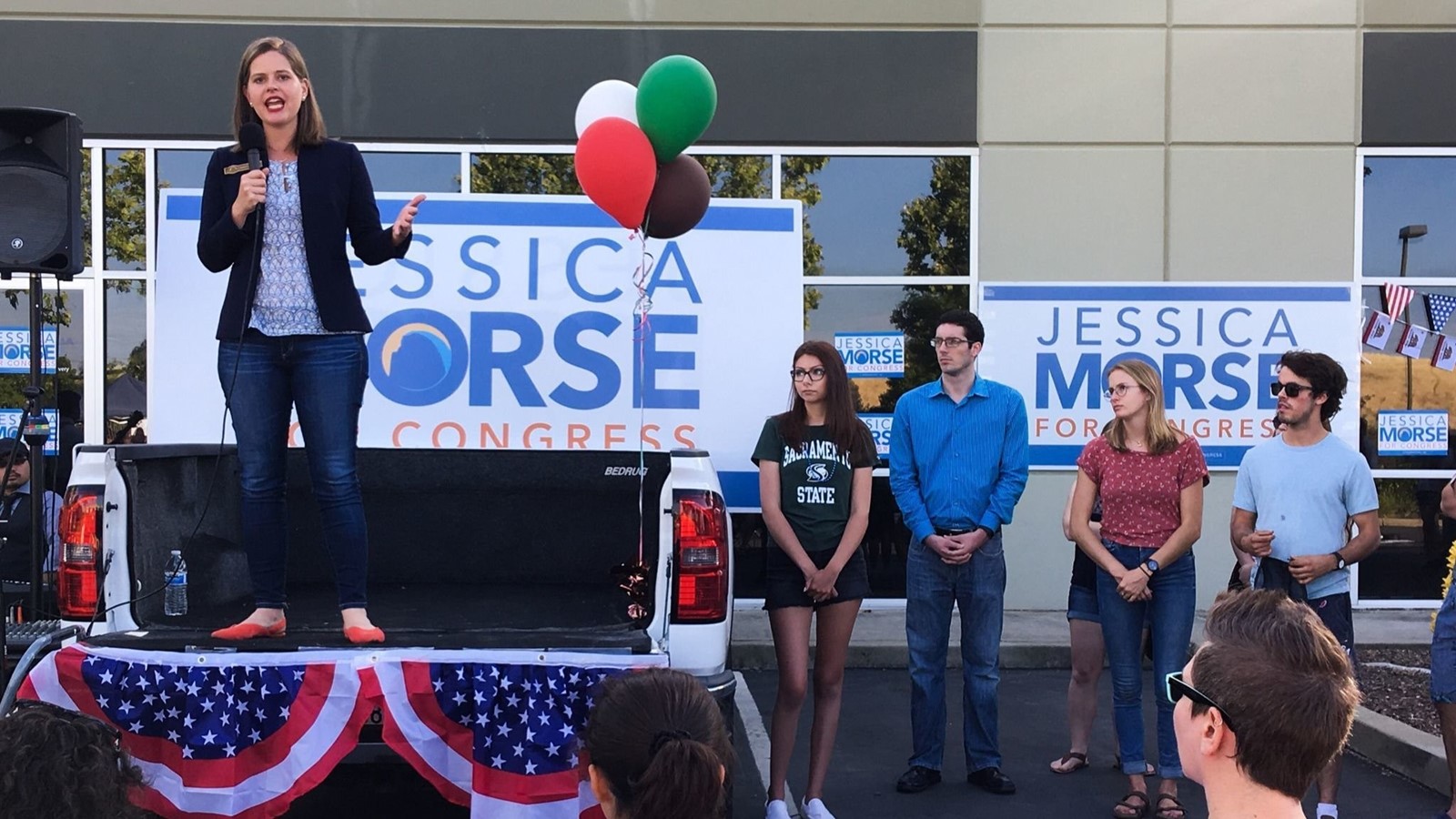 This is no suburban, coast-hugging battleground. This is Yucca Valley, the part of California where it’s easier to get a signal for the local Christian radio station than for NPR, and the tallest structures for miles are wind turbines that tower over the desert.

This landlocked slice of southeastern California is home to three-term GOP incumbent Paul Cook and has been represented by a string of Republicans for decades.

Marge Doyle thinks she has a shot at changing that this year, and she’s not alone. As national Democrats play up talk of a wave that could help them regain control of the House, Doyle is one of more than a dozen Democrats attempting to unseat GOP incumbents in California districts long considered unwinnable. It’s a bold move in a year when skeptics may soon accuse them of sapping resources Democrats need elsewhere.

In Cook’s 8th Congressional District, Doyle has raised six-figure sums in the largely rural district that includes Mammoth Lakes, Death Valley and the high desert towns bordering Joshua Tree National Park. She is pitching herself as a “practical” candidate willing to cross party lines. Similar campaigns are being waged against Reps. Tom McClintock in the Sierra Nevada, Devin Nunes in the Central Valley and Duncan Hunter in inland San Diego County.

“I would call them extreme longshots,” said Darry Sragow, a former Democratic strategist and editor of the nonpartisan election guide California Target Book. Looking purely at data and past voter behavior, “pouring money into Democratic candidacies in these districts is the equivalent of tearing it in little pieces and flushing it down the toilet.”

“Oh my God, a Democrat who’s not afraid to say it in public around here!” a man shouted as her float turned the corner onto Route 62.

Down the street, across from a Jazzercise studio that sits next to an ammunition shop, few of the spectators holding her campaign fliers knew she was a Democrat. She rarely introduces herself as one. “It’s a nonstarter in this district,” said Doyle, who often works it into the conversation along with descriptions of her bipartisan work on the local healthcare district board.

Many doubt a Democratic wave, if it materializes, will reach this far into such strongly Republican pockets of California.

“I’m not so sure it’s a tsunami any longer, it seems much more like a four-foot wave to me,” said GOP Assemblyman Chad Mayes, riding in a flag-adorned Jeep a couple of floats ahead of Doyle. But he acknowledged the Democrats in the area are more energized than ever. When he picks up his mail at the post office, he says, he spots a flood of mailers in the recycling bin. “I have no doubt that Paul’s going to win. But the energy is something you have to watch for.”

That energy is what House candidate Jessica Morse has noticed in her northeastern California district even though McClintock’s 4th Congressional District boasts the highest percentage of registered Republicans in the state.

But Morse has given Democrats hope, raising more than $1 million and ending her last quarter with more cash in the bank than McClintock, who’s been in office for nearly a decade. She won the endorsement of the California Democratic Party despite some infighting with other Democrats in her race.

Buoyed by opposition to Trump, activists have confronted McClintock at town hall meetings, protested outside his office and knocked on doors in the suburban Sacramento County neighborhoods that have been dubbed the “Orange County of the north.”

In the last several cycles, Democratic challengers here have struggled to raise even $100,000 during the entire election and often can’t afford office space. “Now, we have three field offices open. We have volunteers across the district,” Morse said.

Many doubt the congressman will have trouble in a district that just two years ago reelected him with 63% of the vote.

Jon Huey, McClintock’s campaign manager, pointed to the fact that the momentum appears to have shifted in favor of Republicans in the last few weeks: election prognosticators have predicted certain California districts are more favorable for the GOP than before and Republicans have closed the gap somewhat in national polls.

“We can also thank liberal Democrats in Sacramento in energizing the Republican base in the district and across California,” Huey said, pointing to the new gas tax and “sanctuary state” laws.

But in Roseville, a wealthy Sacramento suburb with good schools and polite neighbors, residents measure rising enthusiasm in the growing number of lawn signs and bumper stickers touting Democratic candidates and causes — and in the willingness of moms to talk politics after Trump won.

“The moms that I know, we are tired of being polite and hiding,” said Liz Jensen, a 54-year-old mother of two who works for an environmental consulting firm. “We have found out there are more Democrats here than we realize.”

The overwhelming lesson from 2016, when national Democrats got involved late in races like the one against Rep. Darrell Issa and barely missed unseating him, is that “Democrats need to be competing everywhere,” said Amanda Sherman, a spokeswoman for the Democratic Congressional Campaign Committee.

They seem to be taking that almost literally, identifying 104 districts as part of their national battleground. That’s the largest field in at least a decade and certainly far more than the 23 GOP-held seats won by Hillary Clinton two years ago, the same number that Democrats need to flip to take back the House.

John Lapp, who oversaw a 31-seat pickup for Democrats as executive director of the DCCC in 2006, says the wide field is justified by the impressive roster of candidates in tough GOP-held districts this year, an embarrassment of riches in comparison to 2006.

With energy on the Democrats’ side, relying on traditional maps focused on districts considered to be low-hanging fruit isn’t enough anymore, Lapp said. That’s particularly true with the top-two primary system and the fact that Democrats are already having a hard time penetrating the priority districts in the Central Valley. “You just don’t know where you’re going to get your wins and where you’re not,” he added.

In places that lack a robust local Democratic Party, even a few thousand dollars or a few dozen volunteers can help campaigns, says Doug Linney, campaign manager for Flip the 14, a new PAC dedicated to helping Democrats in all 14 GOP-held House districts in California. The group has bolstered canvassing efforts in McClintock’s district, created a phone bank and texting center and provided voter lists to activists in Cook’s district so they could target which doors they knocked on.

Red to Blue California, another group, jumped in to help fundraise for prosecutor Andrew Janz, a Democrat who has raised $1.9 million for his run against Nunes.

In the lead-up to the Tuesday primary, the DCCC and other national Democratic groups have focused almost exclusively on ensuring their candidates don’t get locked out of the top-two primary, which could advance two Republicans to the general election in key Orange County districts.

“Democrats can’t expand beyond their primary area of focus in California because it’s quickly becoming an embarrassing, multimillion-dollar disaster for them,” Hunt said.

For now, the DCCC and most other Democratic groups aren’t investing a lot of money in these tough-on-paper districts, taking a wait-and-see approach.

If Democrats’ worst fears about California’s primary come true, it could be crucial for them to have credible candidates competing in districts deemed less likely to flip in November.

That could leave them with options if overwhelming Democratic momentum takes over the country, or force rarely tested GOP incumbents to burn more money in a tough campaign than they would have otherwise.

“Some of these seats haven’t seen a serious challenger for a very long time,” Linney said. “It could be a four-year process instead of a two-year process.”

In Yucca Valley, that was apparent as Marge Doyle went door-to-door after the parade.

At one, Doyle was looking for 71-year-old Emily Shoemaker, a Democrat who hadn’t turned in her ballot. Her husband, Scott, a Republican, answered instead and Doyle didn’t miss a beat.

“What are the key issues to you, Scott?” Doyle asked. It was the first time he could recall a candidate knocking on his door.

Shoemaker, who calls himself a “lukewarm” Cook supporter, mentioned law and order and healthcare. He said he’s fiscally conservative, but didn’t vote for Trump and wants to see the two parties compromise more.

When he asked what party she’s running with, Doyle told him, but added, “I don’t take those right or left litmus tests, I’m really practical. I want to get something done.”

“I think I got two votes out of that,” Doyle said as her team drove on. “I think there’s hope, and I wouldn’t be doing this if I didn’t think so.”

Down the street, a woman apprehensively answered the door. “Are you party affiliated?” she asked Doyle, turning her campaign literature over. “I’m a Democrat,” Doyle repeated, and the woman was visibly relieved.

To have a strong Democratic candidate challenging Cook, “it means a lot. It probably means I won’t blow off voting this time,” said the woman, a Democrat who declined to give her name because, unlike Doyle, she doesn’t like to say she’s a Democrat in public.

“You can count on me,” she said, “and if this doesn’t materialize, I really hope you’ll hang in there for the rest of us.”