Mueller says Trump was not exonerated by investigation

The outgoing special counsel refuses in a rare public statement to clear the president of a possible crime. 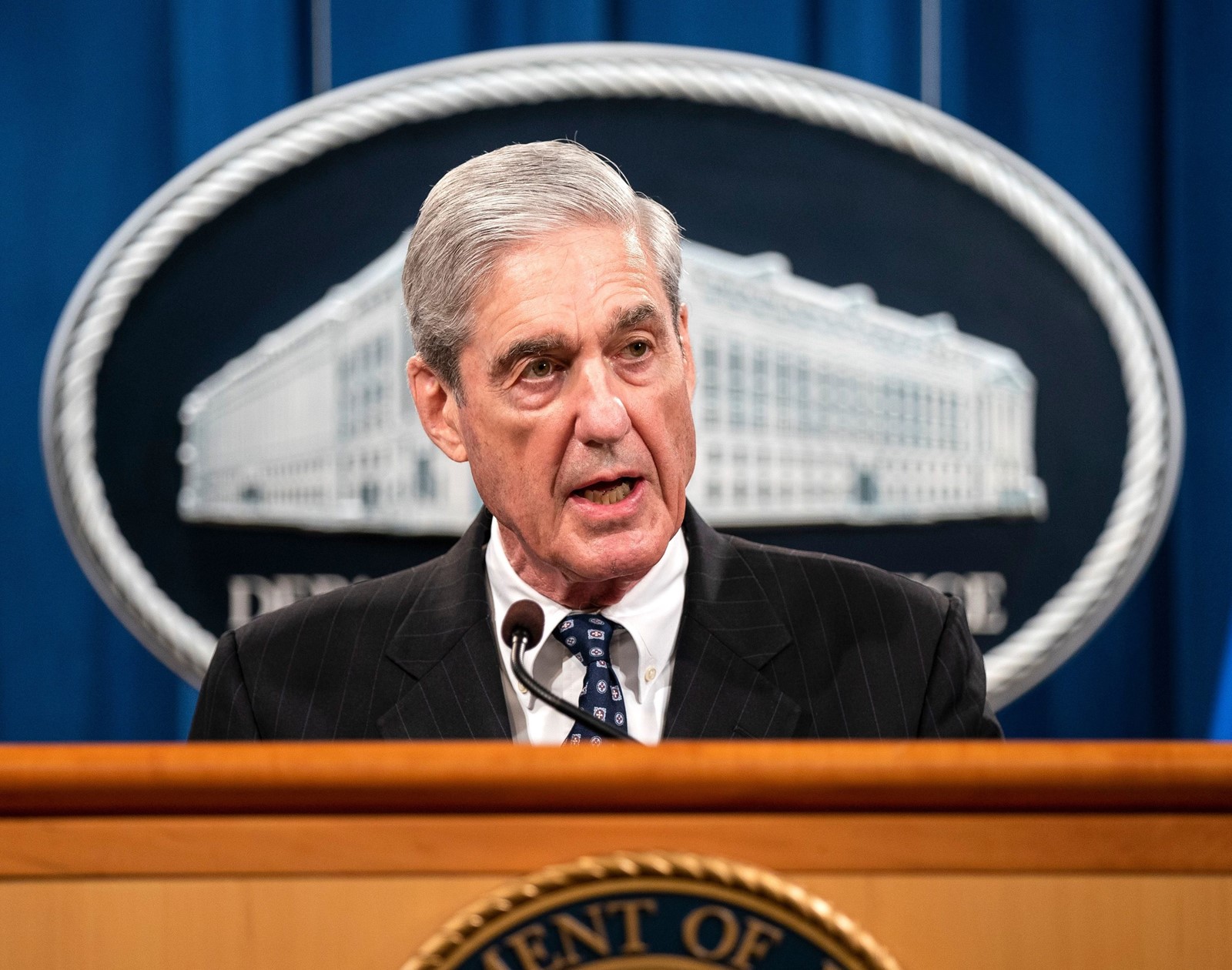 “WHEN A SUBJECT of an investigation obstructs that investigation or lies to investigators, it strikes at the core of the government’s effort to find the truth and hold wrongdoers accountable,” Robert S. Mueller III said. (Jim Lo Scalzo EPA/Shutterstock)
PREVIOUS IMAGE

Appearing at the Jus- tice Department, Mueller sought to put a capstone on his nearly two-year investigation, reading a statement but taking no questions from reporters. He did not definitively rule out testifying to Congress but said he would not go beyond the redacted 448-page report released six weeks ago.

He stopped far short of Trump’s claims, and those of Atty. Gen. William Barr, that the investigation found no obstruction of justice by the president and no collusion between Trump’s campaign and Russian operatives.

Mueller said Justice Department guidelines prevented indicting a sitting president, a remark that suggested it was the rules, not the lack of evidence, that spared Trump from criminal charges.

“If we had confidence that the president did not commit a crime, we would have said so,” Mueller said in a raspy baritone that hadn’t been heard publicly since he was appointed special counsel in May 2017.

As for Russia’s intervention in the 2016 campaign, he cited “insufficient evidence to charge a broader conspiracy” beyond the indictments of 25 Russian military intelligence operatives and others for stealing Democratic Party emails and sowing disinformation on social media.

He urged Americans — and implicitly Congress and the Trump administration — to take the threat of foreign meddling more seriously to preserve the integrity of future U.S. elections.

“There were multiple systematic efforts to interfere in our [2016] election,” Mueller said. “And that allegation deserves the attention of every American.”

Mueller, 74, also announced that he was resigning as special counsel and would return to private life, an expected outcome now that his investigation is over. A former FBI director, he was in private practice before he was appointed special counsel.

Although he barely strayed from the text of his report, his appearance — abruptly announced 90 minutes earlier — proved dramatic after he had seemed sphinx-like for nearly two years, avoiding any public comment.

He never appeared to announce indictments, and he did not speak to the media when he filed his final report on March 22 or when the Justice Department released a redacted version on April 18.

Trump responded in a tweet shortly after Mueller finished his statement.

“Nothing changes from the Mueller Report,” he tweeted. “There was insufficient evidence and therefore, in our Country, a person is innocent. The case is closed! Thank you.”

White House Press Secretary Sarah Huckabee Sanders told reporters that Trump had been “fully and completely exonerated” even though Mueller said investigators had not concluded that.

Rep. Jerrold Nadler (D-N.Y.), chairman of the House Judiciary Committee, highlighted Mueller’s refusal to clear Trump of a potential crime, although he did not indicate that he was ready to start impeachment proceedings.

“It falls to Congress to respond to the crimes, lies and other wrongdoing of President Trump,” Nadler told reporters. “We will do so.”

Nadler, who has sought to get Mueller to testify about his report, appeared less adamant after hearing his statement. “Mr. Mueller told us a lot of what we need to hear today,” Nadler said.

Mueller made clear he hoped congressional testimony wouldn’t be necessary.

“The report is my testimony,” Mueller said. “I would not provide information beyond that which is already public in any appearance before Congress.”

He added, “I do not believe it would be appropriate for me to speak further about the investigation or to comment on the actions of the Justice Department or Congress.”

After reading his statement, Mueller departed the podium with a staccato wave of his left hand as reporters shouted questions.

Moscow conducted a two-pronged covert effort during the 2016 campaign. The Internet Research Agency, a so-called troll farm allegedly funded by an oligarch close to Russian President Vladimir Putin, spread divisive and false content on social media. And military intelligence officers hacked Democratic Party emails and released them through WikiLeaks at key moments during the campaign.

Mueller did not state a conclusion on whether Trump broke the law by obstructing justice. The special counsel’s report outlined various ways the president tried to influence the outcome of the investigation, such as directing his White House lawyer to remove Mueller from his post.

The report also said Trump tried to limit the probe “to prevent further investigative scrutiny of the president’s and his campaign’s conduct.”

After Mueller filed his report, Barr released a letter saying the evidence did not show that Trump had committed a crime by obstructing justice. Deputy Atty. Gen. Rod Rosenstein, who appointed Mueller and supervised the investigation, said he agreed with that assessment. Rosenstein has since resigned.

Outside legal experts and many Democratic members of Congress argued, however, that some of Trump’s actions would be prosecuted if he were not president.

Mueller had previously complained privately that Barr did not “fully capture the context, nature and substance of this office’s work and conclusions,” but little of that tension was on display Wednesday.

Instead, Mueller thanked Barr for making much of the report public and said he did not question the attorney general’s “good faith” in the redaction process.

The special counsel’s comments, however, contrasted with Barr’s own description of the investigation.

For example, when Barr held a news conference last month, he said “there is substantial evidence to show that the president was frustrated and angered by a sincere belief that the investigation was undermining his presidency,” a perspective that cast Trump’s actions in a more innocent light.

“When a subject of an investigation obstructs that investigation or lies to investigators, it strikes at the core of the government’s effort to find the truth and hold wrongdoers accountable,” he said.

He also emphasized the role of Justice Department rules in his decision not to determine whether Trump had committed a crime, and hinted that it was up to lawmakers, not prosecutors, to sanction the president if they believe he broke the law — two aspects of his report that Barr had downplayed.

“Charging the president with a crime was not an option we could consider,” he said. The Constitution “requires a process other than the criminal justice system to formally accuse a sitting president of wrongdoing.”

Mueller’s statement came while Congress was on Memorial Day recess, leaving very few members in Washington and dampening the chance of immediate fireworks from Capitol Hill.

But Rep. Justin Amash (R-Mich.), the only House Republican who has called for impeachment proceedings against the president to begin, tweeted soon after that “the ball is in our court, Congress.”

Even though Mueller did not significantly expand on the text of his report in his comments, some Democratic presidential candidates responded by calling for impeachment for the first time.

Sens. Cory Booker of New Jersey and Kirsten Gillibrand of New York both tweeted that it was time to begin impeachment proceedings.

Other Democratic candidates, including Sen. Elizabeth Warren of Massachusetts and Sen. Kamala Harris of California, had already called for impeachment.