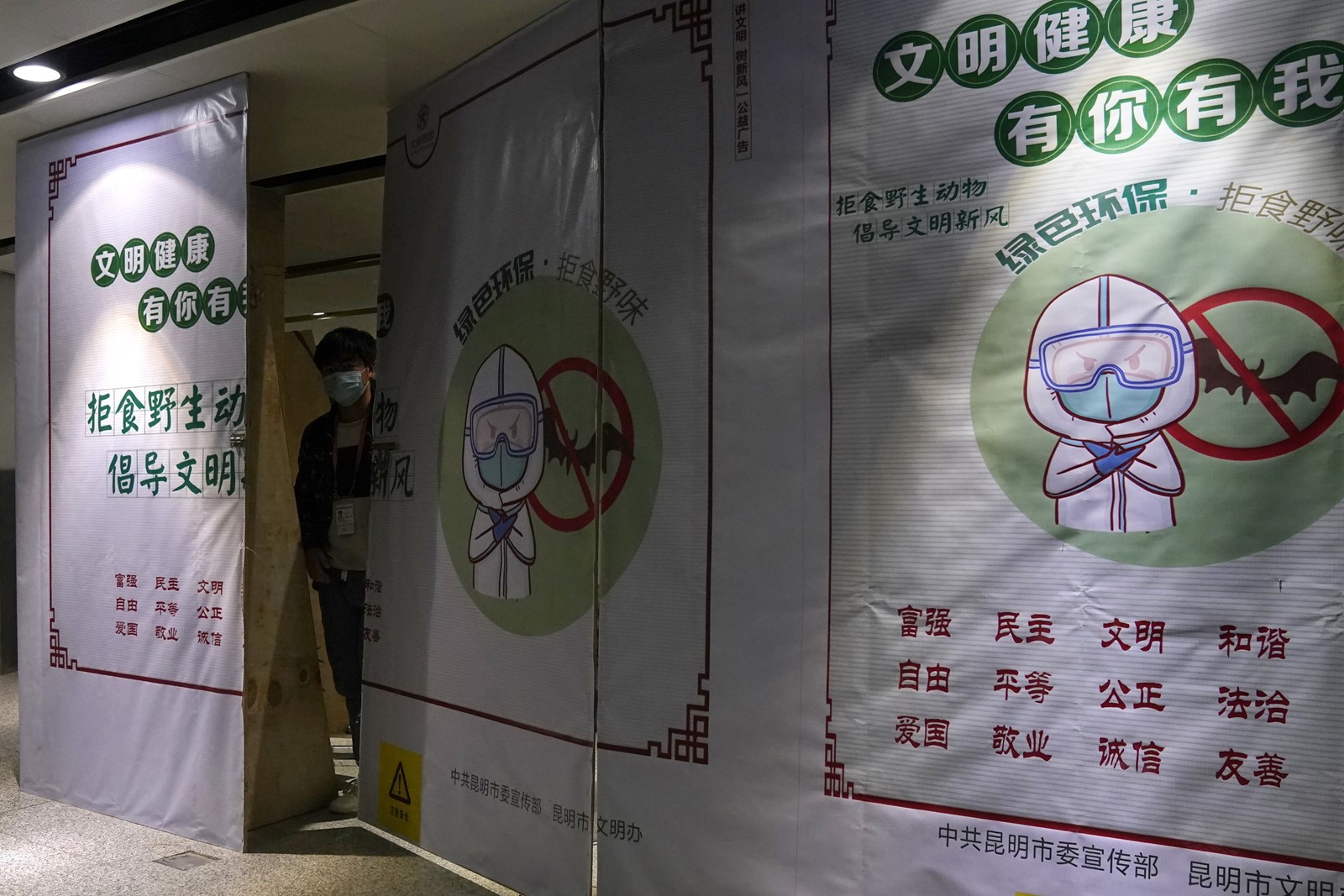 POSTERS URGE travelers at an airport in China’s Yunnan province not to eat wild animals. Beijing has mandated that all scientific research on the coronavirus’ origins be screened by the government before publication. (Photographs byNg Han Guan Associated Press) 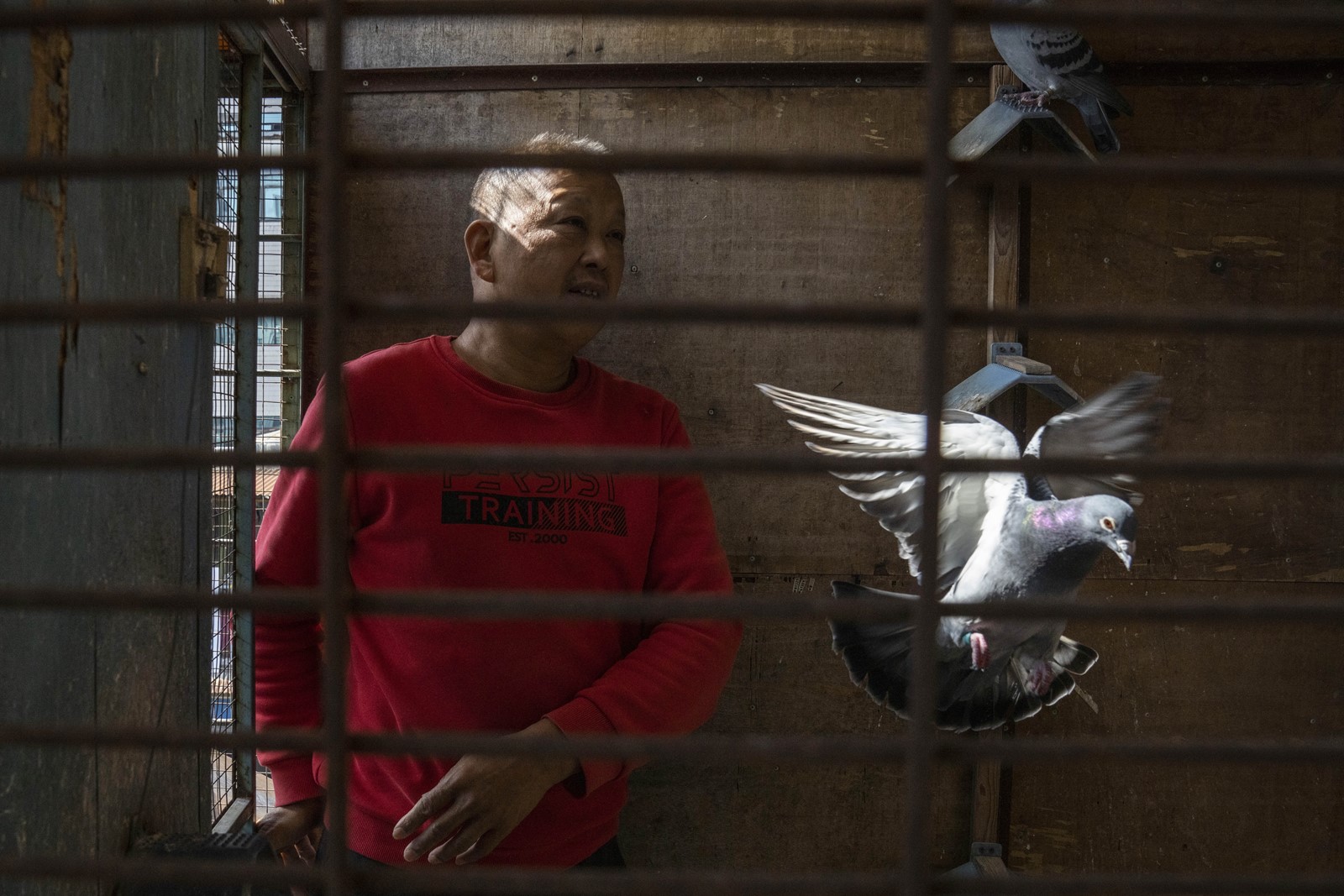 CHINA’S inquiry into the virus started at a seafood market in Wuhan. Meanwhile, Beijing has promoted fringe theories that the pandemic began elsewhere. ()
PREVIOUS IMAGE

Deep in the lush valleys of southern China lies the entrance to a mine shaft that once harbored bats that carried the closest known relative to the coronavirus.

The area is of intense interest — it may hold clues to the origins of the SARS-CoV-2 virus that has killed more than 1.8 million people worldwide — but has become a black hole of information because of political sensitivity.

A bat research team that visited recently had its samples confiscated, two people familiar with the matter said. And a team of Associated Press journalists was tailed in cars by plainclothes police who blocked access to sites in late November.

More than a year since the first known person was infected with the coronavirus, an AP investigation shows the Chinese government is strictly controlling all research into its origins while promoting fringe theories that the pandemic originated elsewhere.

The government is monitoring scientists’ findings and mandating that the publication of any research first be approved by a new task force managed by China’s Cabinet under orders from President Xi Jinping, internal documents obtained by AP show. In a rare leak from within the government, the dozens of pages of unpublished documents confirm what many have long suspected: The clampdown comes from the top.

The AP’s investigation was based on interviews with Chinese and foreign scientists and officials, along with public notices, leaked emails and the unpublished documents from China’s State Council and the Chinese Center for Disease Control and Prevention. It reveals a pattern of government secrecy and top-down control that has been evident throughout the pandemic.

“They only select people they can trust, those that they can control,” said an expert who works with the China CDC, declining to be identified out of a fear of retribution.

China’s Foreign Ministry said in a fax that “the novel coronavirus has been discovered in many parts of the world” and research should be carried out “on a global scale.”

Research into the virus’ origins is critical to preventing epidemics, and the move severed ties between Chinese and U.S. scientists. Although the World Health Organization says it will send a team to China in January to investigate, its members and agenda had to be approved by China.

The inquiry into how the coronavirus first emerged started in the Huanan Seafood Market in Wuhan, a sprawling complex where many of the first human cases were detected.

In mid-December 2019, Huanan vendor Jiang Dafa noticed people were falling ill, including a worker who helped clean carcasses at a stall, who died.

In late January and early February, as the virus spread rapidly, Chinese scientists published a burst of research papers on COVID-19. Then one paper proposed without concrete evidence that the virus could have leaked from a Wuhan lab near the market. It was later retracted, but it raised the need for image control.

An internal notice from a China CDC lab issued on Feb. 24 put in new approval processes to standardize publication under “important instructions” from President Xi. Other notices ordered CDC staff not to share data, specimens or other information related to the coronavirus with outside institutions or individuals.

The notice, obtained by the AP and marked “not to be made public,” was sweeping in scope, applying to all universities, companies, and medical and research institutions. It said communication and publication of research had to be orchestrated like “a game of chess” under instructions from Xi and guided by propaganda and public opinion teams.

The order warned that those who published without permission, “causing serious adverse social impact, shall be held accountable.”

After the secret orders, the tide of research papers slowed to a trickle. Though the China CDC returned to collect some 2,000 samples from the market over the following months, nothing was published.

On May 25, China CDC chief George Gao said no animal samples from the market had tested positive, ruling it out as the source.

With the market declared a dead end, scientists turned their attention to hunting for the virus at its likely source: bats.

Nearly a thousand miles away from Wuhan, bats inhabit a maze of underground limestone caves in Yunnan province. The coronavirus’ genetic code is strikingly similar to bat coronaviruses, and scientists suspect the virus jumped into humans from a bat or an intermediary animal.

Records show scientist Xia Xueshan received a grant to screen animals in Yunnan for COVID-19. In February, his team took samples from animals including bats, snakes, bamboo rats and porcupines.

But the government restrictions soon kicked in; data on the samples have not been released.

Today, the caves in Yunnan, home to the closest viral relative of the virus, are under close watch. Security agents tailed the AP team in three locations and stopped journalists from visiting the cave where researchers identified the bats responsible for SARS in 2003.

Chinese state media have instead promoted theories suggesting the coronavirus originated elsewhere, such as via frozen seafood, a hypothesis the WHO and others have dismissed.

The government is also limiting and controlling the search for the first human cases through the retesting of flu samples. Hundreds of Chinese hospitals collect samples from patients with flu-like symptoms, storing them for years.

The samples could easily be tested again for the novel coronavirus, although politics could determine whether the results are made public, said Ray Yip, the founding director of the China CDC.

Researchers in the U.S., Italy, France and elsewhere have combed through some of their archived samples to identify the earliest cases of the virus in late 2019.

But in China, scientists have published retrospective data from only two Wuhan flu surveillance hospitals, out of at least 18 in Hubei province and more than 500 nationwide.

The little information that has trickled out suggests COVID-19 was circulating beyond Wuhan in 2019, a finding that could raise awkward questions for Chinese officials about their early handling of the outbreak.

Peter Daszak of the EcoHealth Alliance said identifying the coronavirus’ source shouldn’t be used to assign guilt: “We’re all part of this together. Until we realize that, we’re never going to get rid of this problem.”