The decision, so soon after Trump’s failed summit with Kim, raises concerns. 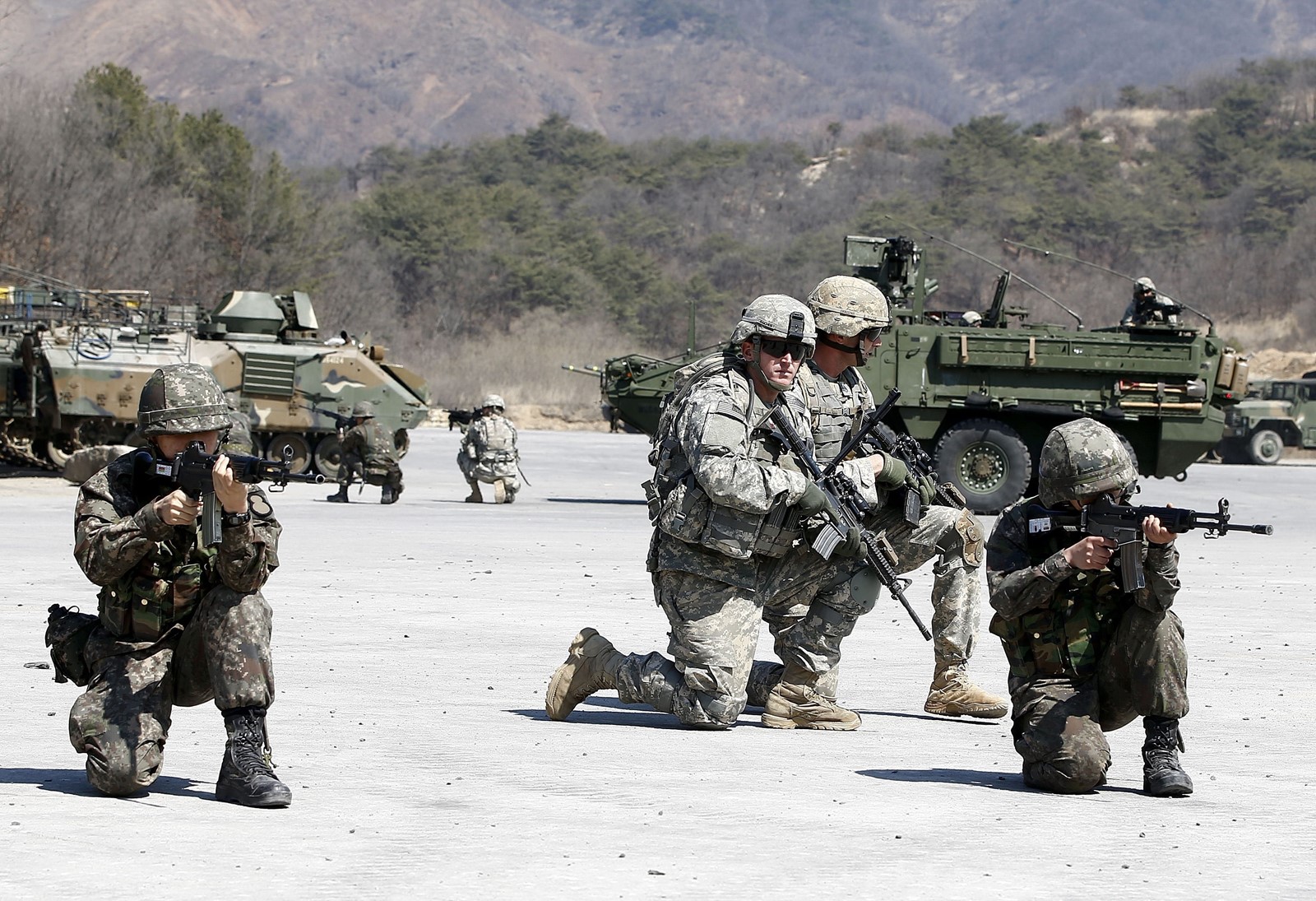 The Pentagon is permanently canceling the large-scale military exercises in South Korea usually held in the spring, U.S. officials said Friday, handing Pyongyang a long-sought concession just days after a summit between President Trump and North Korean leader Kim Jong Un broke up without a deal.

The timing of the decision raised questions about whether Trump was giving away a major piece of leverage over North Korea, which has long denounced the exercises as provocative, and failing to get anything in return.

“Why negotiate with the United States when it makes concessions for free?” Abraham Denmark, a former top Pentagon official during the Obama administration, wrote on Twitter. He said the decision to halt the maneuvers would have “major implications for readiness” of U.S. and South Korean forces.

Thousands of U.S. and South Korean troops had conducted the exercises, known as Key Resolve and Foal Eagle, annually for more than a decade. But last year, Trump suspended several annual Korea exercises, citing the cost and the need to ease tensions with North Korea.

The spring exercises will be replaced by smaller-scale drills that don’t call for major field maneuvers but still ensure that U.S. and South Korean forces can repel a North Korean invasion, said the officials, who did not want to speak on the record ahead of the formal announcement, expected Saturday.

Trump has repeatedly complained about the large-scale exercises, saying they’re too costly and that the U.S. bears too much of the financial burden. But defenders say the training is relatively cheap, noting estimates that a separate Korea exercise staged by the Pentagon cost only $14 million a year.

The president hinted at the decision to cancel them Thursday at a news conference in Hanoi.

“Those exercises are very expensive,” Trump said. “And I was telling the generals, I said, ‘Look, you know, exercising is fun and it’s nice and they play the war games. And I’m not saying it’s not necessary, because, at some levels, it is, but at other levels, it’s not. But it’s a very, very expensive thing. And, you know, we do have to think about that too.’”

U.S. officials are expected to inform South Korea of the decision shortly, the officials said. The exercise halt was first reported by NBC News.

In the past, the U.S. conducted several major field exercises with South Korea each year, one in late summer or fall and one in the spring, as well as several other training events using computer simulations and tabletop war games.

Pentagon officials and U.S. commanders in South Korea, where the U.S. keeps 28,500 troops, have been discussing changes to the exercises since they were suspended last year, officials said. It was initially expected that the cancellation announcement could be part of a summit agreement between Trump and Kim.

Plans to announce the cancellation proceeded, despite the lack of a summit deal.

But last month, the U.S. commander in South Korea, Army Gen. Robert Abrams, played down the decision to halt the joint exercises, saying troops from both countries remained prepared to defend South Korea “without sacrificing war-fighting readiness to unacceptable levels.”

Trump cut short the summit Thursday with no agreement on rolling back North Korea’s nuclear program, a setback to his high-profile diplomatic outreach to the reclusive nation.

Kim had sought the lifting of most economic sanctions in return for a promise to dismantle at least part of his Yongbyon nuclear facility, an offer the administration deemed inadequate, a senior State Department official said.

The decision to proceed with the cancellation after the failed summit “looks bad, but I suspect it was agreed separately and people did not consider how it would look if Hanoi failed,” said Melissa Hanham, a nuclear weapons expert and North Korea specialist at One Earth Future, an anti-proliferation organization based in Colorado.

Abrams alluded to the plans to cancel the spring drills last month, telling lawmakers that a “new construct” for training worked out with South Korean commanders had been “forwarded up to the Department of Defense and received full support.”

North Korea had made little change to its threatening military posture since Trump and Kim first met last June in Singapore, he noted. Though its equipment is increasingly outdated, Pyongyang maintains one of the largest conventional militaries in the world, along with a stockpile of nuclear weapons.

Other annual U.S.-South Korea exercises are not directly affected by the decision to cancel the large-scale spring drills, but are also likely to be scaled back or canceled, the officials said.

Last year, four separate exercises were conducted from early April to late May, including Foal Eagle, which involved 11,500 U.S. and 290,000 South Korean troops. It was followed by Key Resolve, which used a computer simulation of a possible attack by North Korea to improve headquarters command and control.

Those were followed by Warrior Strike and Max Thunder, the latter an Air Force exercise that in the past has involved sending U.S. bombers from Guam to South Korean airspace.

After last year’s Singapore summit, the Pentagon said it was canceling a major series of drills known as Ulchi Freedom Guardian, which were scheduled for two weeks in August and involved 17,500 U.S. forces.

Jeffrey Lewis, an Asia expert at the James Martin Center for Nonproliferation Studies in Monterey, Calif., noted that the Key Resolve and Foal Eagle exercises were started in 1994 as a smaller-scale replacement for another set of major drills known as Team Spirit.

The smaller drills were part of a Clinton administration diplomatic outreach to North Korea, but once that effort collapsed, the new maneuvers steadily grew.