Still breaking norms, he declines to concede. Next could come pardons — and more firings. 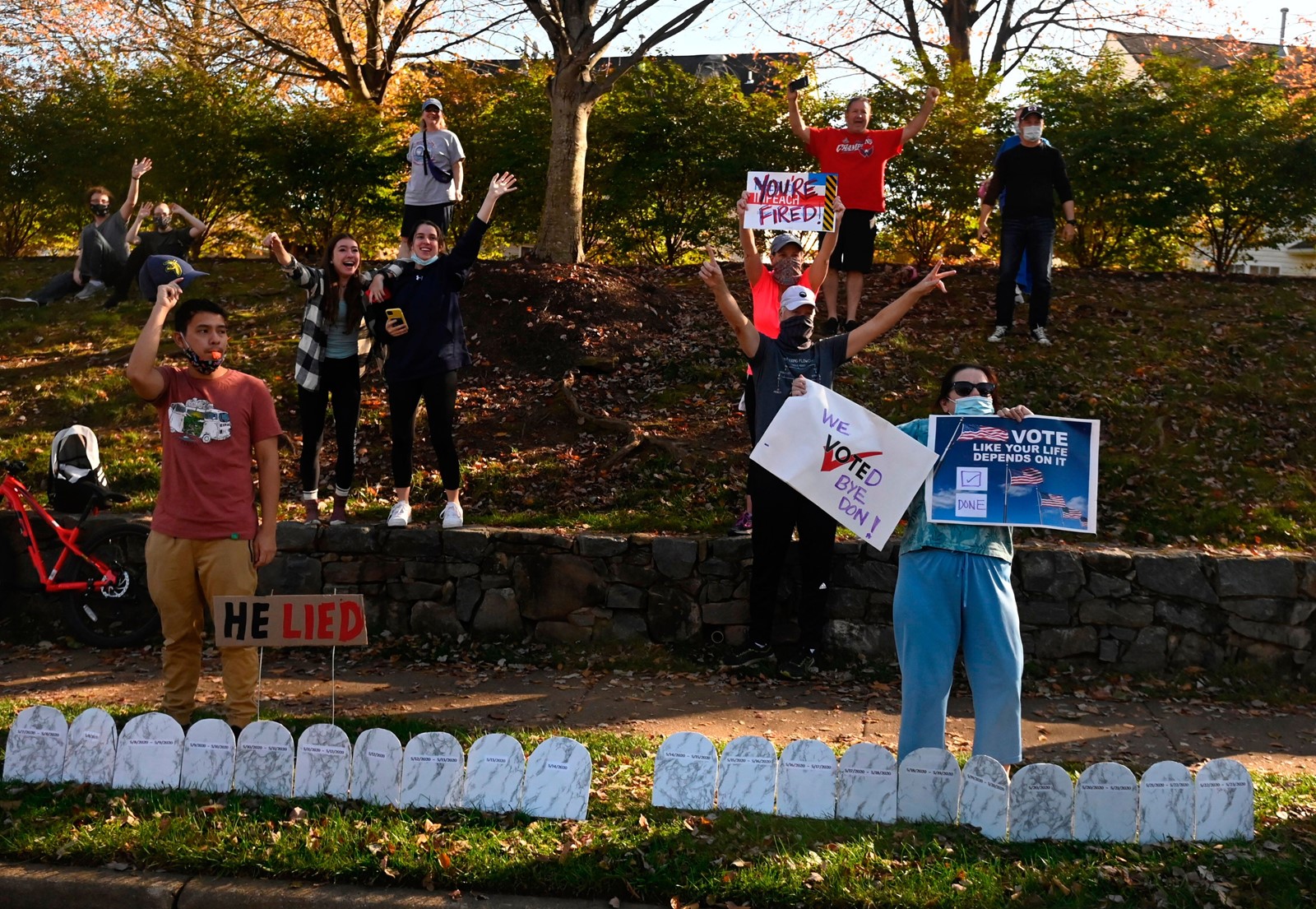 President Trump has 10 weeks to exact revenge on his political foes, pardon his friends and make life difficult for President-elect Joe Biden, who bested him at the ballot box and turned him into something he hates: a loser.

Now a lame duck, Trump is continuing to push political norms and stoke partisan passions by refusing to concede, repeating the same blatant falsehoods he made after the election — that he had won but Democrats “stole” the race through fraud.

Trump tweeted his intentions Saturday morning, before arriving at his Virginia golf course, falsely claiming: “I WON THIS ELECTION, BY A LOT!”

Among the president’s first moves may be dismissal of several senior administration officials whom Trump had appointed but whom he later deemed insufficiently loyal, or simply unwilling to do his bidding, infuriating the president and his inner circle.

Those believed most in danger include: FBI Director Christopher A. Wray, who found no credible reason to investigate Biden and his family; Defense Secretary Mark Esper, who resisted sending active-duty troops to quell racial justice protests; and CIA Director Gina Haspel, who refused to deny reports that Russia paid bounties to the Taliban to kill U.S. troops in Afghanistan.

But Trump’s authority is limited, as he repeatedly discovered in office when federal courts knocked down his executive orders, blocking his ability to make lasting change on several fronts.

In October, as coronavirus cases reached new records, Trump threatened to fire Dr. Anthony Fauci, the nation’s top infectious disease expert. But Trump does not have direct authority to fire Fauci, who is a career civil servant, though he could try to test those limits.

The president has vastly more leeway in foreign affairs, and many government experts say they cannot conceive of the things Trump may do, especially given his undisguised fury at losing to a Democrat he had mocked and insulted for months.

“We’re going to have the most revealing episode about his character than we’ve probably seen in all four years,” said Miles Taylor, a former Trump administration official who, as “Anonymous,” wrote a 2019 book highly critical of his presidency. “If he sees a power that he has somewhere, he has an insatiable desire to use that power.”

Pardons offer the president the most absolute power during his lame-duck phase.

The most prominent possibilities include former national security advisor Michael Flynn, who pleaded guilty in 2017 to lying to the FBI but later tried to withdraw his plea, and Paul Manafort, Trump’s 2016 campaign manager who was convicted of financial crimes.

Trump has already pardoned or given clemency to a long list of political allies, friends and associates.

In July, he commuted the sentence of Roger Stone, a longtime friend and political operative who was convicted of seven felony counts of obstructing a congressional investigation into Russian interference in the 2016 election.

Trump also may try to protect himself and the Trump Organization, his family-run holding company, from potential prosecution once he leaves office.

Federal and state prosecutors in New York are investigating alleged banking and insurance fraud, while the Internal Revenue Service has spent years auditing a $70-million deduction.

“He’s going to use [the lame-duck period] strategically to basically try to protect himself and his family and his money,” said Andrew Weissmann, a former top prosecutor in special counsel Robert S. Mueller III investigation into whether Trump’s 2016 campaign collaborated with Russia and obstructed justice.

That could include proactive pardons for Trump’s grown children, current and former employees, and other figures close to Trump, including his personal lawyer Rudolph W. Giuliani. Trump may also try to pardon himself, a power that has never been tested in court.

“Just how broad the pardons have to be depends on what the president’s worried about,” Weissmann said.

The pardons would not limit all of Trump’s potential exposure. They would cover only federal crimes, not the investigations underway by New York state Atty. Gen. Letitia James and Manhattan Dist. Atty. Cyrus Vance.

Trump also has options on the policy front. He could issue splashy executive orders in hopes of exciting his political base for another run at the White House in 2024, or use them to gain publicity if he chooses to start a media company.

But with few exceptions, they could be overturned with the stroke of a pen by Biden, just as Trump used his authority to undo many of President Obama’s executive actions.

“Executive orders, they’re the weak president’s last resort,” said Elaine Kamarck, a former Clinton administration official who runs the Center for Effective Public Management at the Brookings Institution, a Washington think tank. “They are just simply easily turned around by the next president.”

Trump is unlikely to pass any legislation in Congress before Biden is sworn in on Jan. 20 unless bipartisan support emerges for a COVID-19-related stimulus bill.

Months of negotiations for an economic relief package stalled in late October, but Senate Majority Leader Mitch McConnell (R-Ky.), who won reelection, has said he wants a deal this year.

Some of Trump’s most fervent supporters and media allies want him to issue an executive order ending the granting of automatic citizenship to anyone born on U.S. soil, even if the parents are not legal residents.

That probably would not survive in the courts and undoubtedly would be reversed by Biden. But it would generate a wave of publicity and solidify Trump’s standing as the most hawkish anti-immigration president in modern times.

Trump could also push immigration, environmental and other policy rule changes over the finish line at the Cabinet level. Policy rule changes typically take nine months to two years because they require extensive internal and public review periods, along with legal justifications.

One such rule nearing completion would further limit U.S. asylum for people who say they are fleeing persecution overseas. Over the last four years, Trump has cut refugee admissions to a small fraction of those allowed in the past, erasing America’s tradition of offering sanctuary.

A Biden administration could reverse such rules too. But the process would be time-consuming and take up attention from officials working on other priorities, limiting Biden’s chances to carry out his own agenda.

“Presidential administrations have a finite amount of time,” said Joseph Goffman, who heads the environmental and energy law program at Harvard Law School. “It makes it harder for a Biden administration to break from the starting line on Day One.”

Goffman said Trump could advance environmental rule changes that would loosen standards for soot and smog as well as a proposal that restricts which scientific studies can be used to justify other air quality rules.

Trump also could seek to open more federal land for development. On Oct. 28, he opened more than 9 million acres in the mostly pristine Tongass National Forest to logging and other forms of development, ending protections that President Clinton put in place during his lame-duck period in 2001.