‘America first’ isolates it at U.N.

Trump fails to win over nations, and many are poised to forge on without U.S. 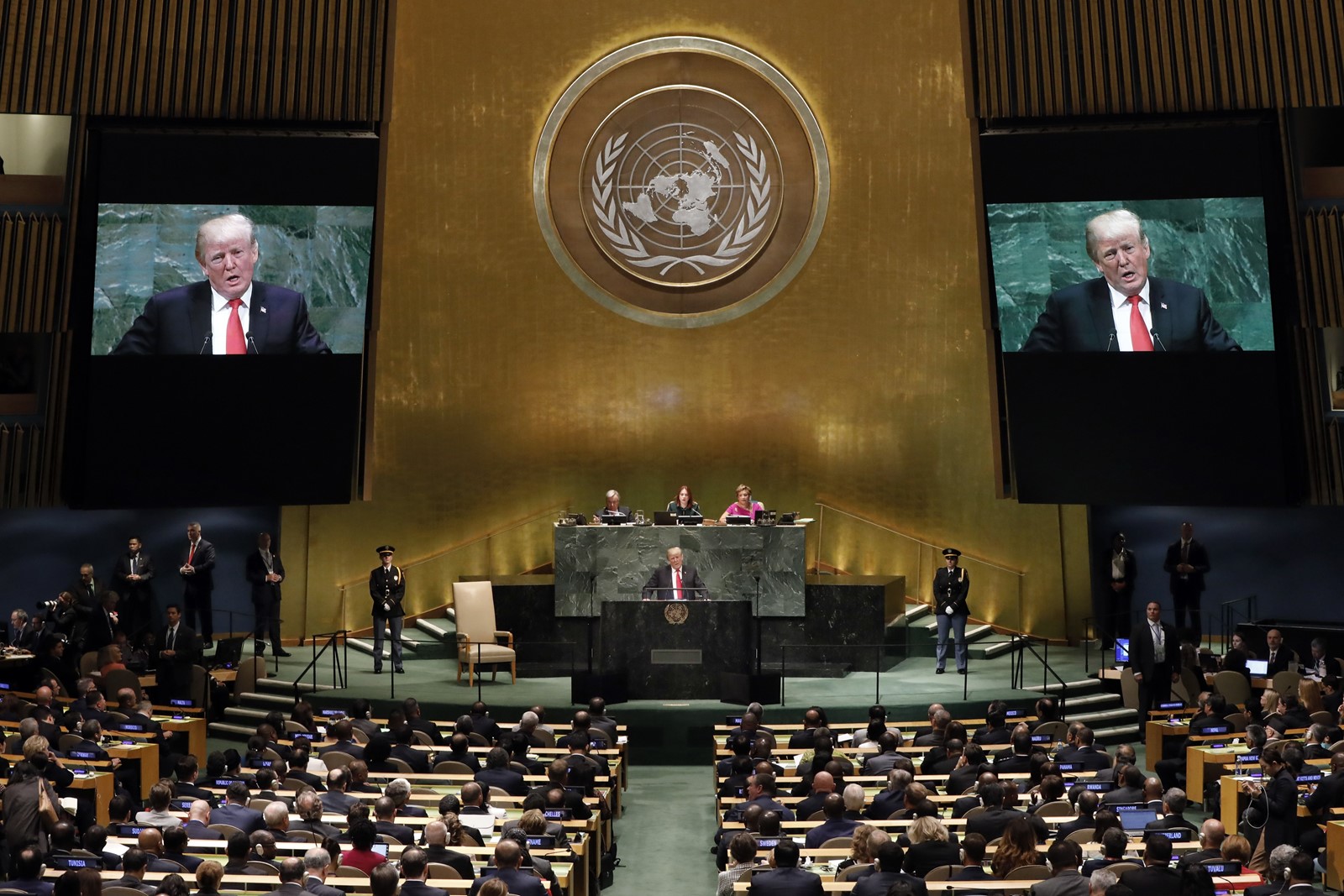 President Trump’s second appearance at the U.N. General Assembly did not get the response he probably sought from the 193 countries gathered in New York this week.

Some leaders and diplomats openly laughed at his boasts. He failed to win support for his hard-line policies on Iran, Venezuela, an international war crimes court, climate change and migration.

French President Emmanuel Macron scolded him, accusing him of abandoning the foundation of today’s world order and global cooperation enshrined by the U.N. itself.

In the end, Trump’s “America first” agenda meant America was mostly alone during his four days at the U.N. this week.

Leaders who once courted Trump, attempted to gain his ear, or tried to persuade him to support global institutions that long were U.S. foreign policy priorities, made clear they would forge on without him on multiple issues of concern.

When Trump and his aides sought to unify the world against Iran, for example, European allies disagreed with his withdrawal from the Iran nuclear deal. They even joined Russia and China to announce a payments system intended to circumvent U.S. sanctions.

And when Trump chaired a Security Council meeting that he initially had wanted to focus on threats from Iran, he sat in silence as leader after leader praised the landmark disarmament deal he had quit, and the need for global cooperation.

In his General Assembly address, Trump similarly criticized a new U.N. pact aimed at easing the global refugee and migration crisis, saying “migration should not be governed by an international body” but by individual countries.

That drew almost no support. Officials noted that virtually every nation had signed the accord except the United States and Hungary.

Some pushed back against Trump’s exhortation of patriotism and national sovereignty over globalism and multilateral efforts to combat the world’s ills.

“This path of unilateralism leads us directly to withdrawal and conflict, to widespread confrontation between everyone, to the detriment of all — even, eventually, of those who believe they are the strongest,” Macron told the General Assembly.

The White House said Friday that Trump had advanced U.S. interests at the U.N., including signing a trade agreement with South Korea, the first such pact since he entered office.

“He pressed world leaders on counter-proliferation in places like Iran, North Korea and Syria; rallied them to do more to counter the opioid crisis; and made his case for peace through strength in his address to the General Assembly,” said Garrett Marquis, a spokesman for the National Security Council.

Trump ruffled more than a few feathers in New York.

He accused China — not Russia — of interfering in America’s upcoming midterm election. As evidence he cited a supplement in an Iowa newspaper that was clearly identified as sponsored by China Daily, a state-run media organ.

Chinese officials were quick to note that many countries buy ads in U.S. newspapers to promote goods or policies, and they denied improper activities aimed at the Nov. 6 election.

Trump won praise from numerous leaders for his willingness to negotiate with North Korean leader Kim Jong Un in a bold, if yet unsuccessful, effort to persuade North Korea to give up its nuclear weapons and production facilities.

The president said he expected to hold his second summit with Kim “quite soon,” and Secretary of State Michael R. Pompeo is expected to return to North Korea in coming weeks to make arrangements.

Trump had nothing but warm words for Kim, a sharp contrast to last year, when the president derided the youthful dictator as “Rocket Man” and threatened to “totally destroy” North Korea.

What some leaders see as a double standard in Trump’s treatment of Iran and North Korea complicates their ability to trust Washington as a consistent partner.

Since pulling out of Iran deal in May, Trump has revived harsh economic sanctions on Tehran — and plans to impose more in November — that will make it difficult for countries to buy its oil or engage in business there.

“Nonproliferation is a global challenge that requires global cooperation, dialogue and constructive U.S. leadership,” he added. “Unfortunately, Trump’s nonproliferation and nuclear risk reduction policies are, so far, a dangerous mess.”