Dictator envy? Trump seems to have it

He voices admiration for North Korea’s leader, underscoring his longtime respect for autocrats. 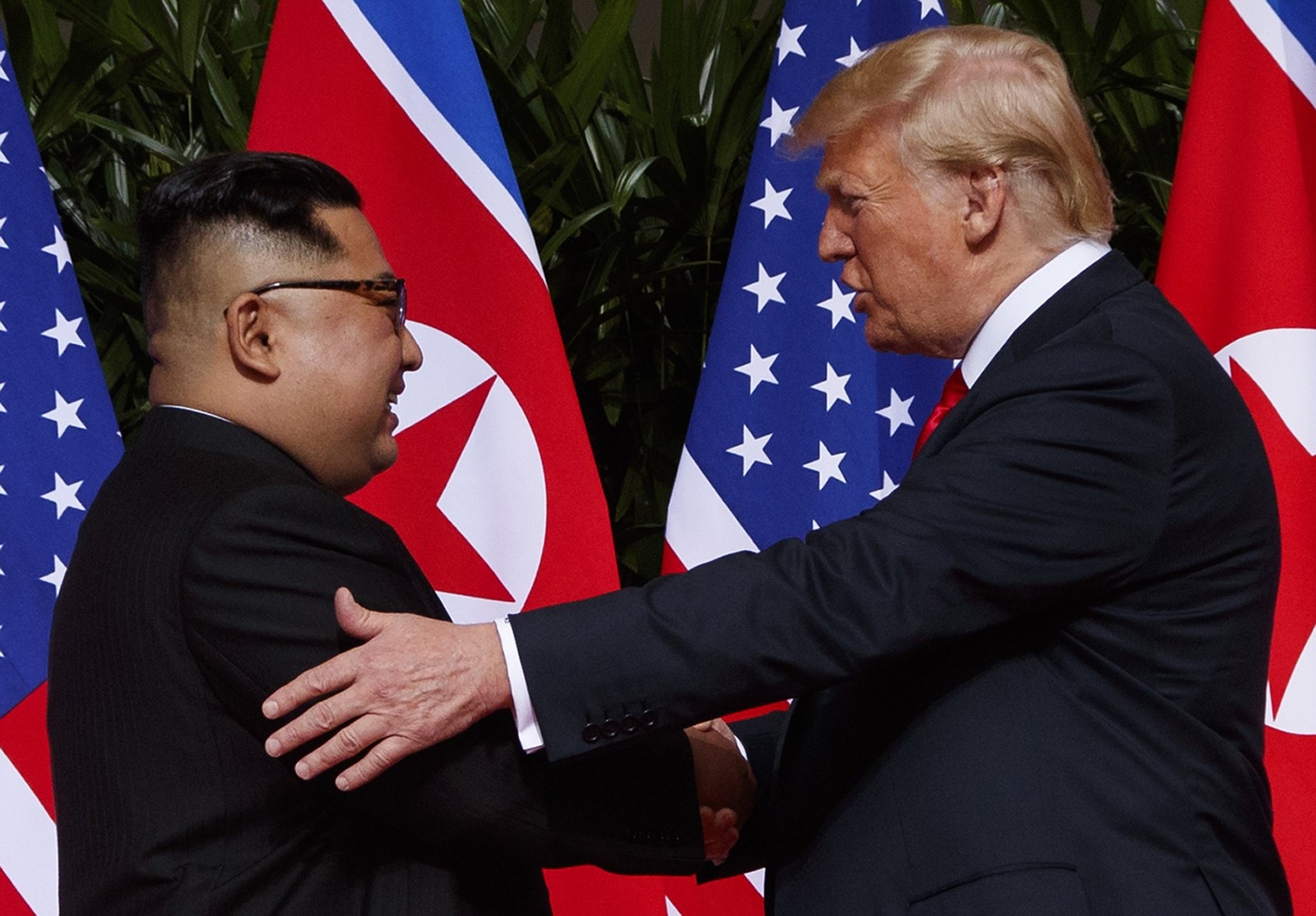 PRESIDENT TRUMP and Kim Jong Un in Singapore. “He speaks and his people sit up at attention. I want my people to do the same,” Trump said of Kim. (Evan Vucci Associated Press)
PREVIOUS IMAGE

Even for a president long known for flattering autocrats, President Trump’s open envy of North Korean leader Kim Jong Un — one of the world’s most brutally repressive dictators — stood out.

“Hey, he’s the head of a country. And I mean he is the strong head. Don’t let anyone think anything different,” Trump told Fox News on Friday. “He speaks and his people sit up at attention. I want my people to do the same.”

Since Trump’s election, foreign policy experts have noted a dramatic shift away from America’s traditional role as a promoter of democracy and human rights around the world. His comments capped a remarkable week that began with a blow-up with allies at the Group of 7 summit of developed countries, included his repeated insistence that Russia wasn’t to blame for its 2014 invasion and annexation of Crimea — President Obama is — and ended with Trump’s continued praise of Kim after their Singapore summit.

“It’s been a troubling week for America’s credibility in the world,” said Nicholas Burns, a former undersecretary of State and NATO ambassador. “Our leadership of the West has long been a moral leadership, that we will be the country that defends democracy.”

In practice, presidents have often fallen short of the lofty rhetoric that has long defined America’s self-conception. But Trump has gone further, all but shedding the democratic aspirations long touted as the bedrock of U.S. foreign policy. His exaltation of Kim’s enforcement of order in North Korea recalled Trump’s praise last year for President Rodrigo Duterte’s anti-drug war in the Philippines.

“There hasn’t been a president who’s really disavowed the values side so much,” said Thomas Wright, a senior fellow in the Project on International Order and Strategy at the Brookings Institution in Washington.

President Nixon, he said, comes closest in the post-World War II era. Yet Nixon was guided by a Cold War ideology that placed a value on opposing communism, and positioning the democratic, free-market United States as a positive, alternative model. Trump, by contrast, sees no fixed distinction between allies and adversaries, he said.

Trump has at times cited as his model President Reagan’s “peace through strength” formulation of foreign policy.

Yet even if the United States did not always live up to those aspirations, and occasionally allied with autocrats, Reagan “created a national security strategy where we went on the offense on democracy, human rights,” said Heather A. Conley, who served in the State Department under George W. Bush. “He challenged the Soviet Union … that was our values and our principles.”

Coming off the contentious G-7 summit last weekend in Quebec, Canada, many of America’s closest allies are reconsidering their relationships with the U.S. While Trump’s proposed steel and aluminum tariffs were the issue that provoked dissension, that spat only deepened frustrations among allies already upset by the president’s abandonment of the Paris climate change accord and Iran nuclear deal.

In a speech this week, Germany’s foreign minister, Heiko Maas, framed the new world order in stark terms, stating that Europeans must now act “as a conscious counterweight” to the U.S. in certain situations.

Canada’s foreign minister, Chrystia Freeland, also raised eyebrows with a speech in Washington on Wednesday rebuking Trump without naming him and vowing that her country would fight for democratic values.

“Facts matter. Truth matters. Competence and honesty among elected leaders and in our public service matter,” she said. “Canada, for one, is going to stand up in defense of that system. We will not escalate, and we will not back down.”

The president’s disregard for traditional allies and the 70-year-old global democratic order has been all the more jarring to world leaders and foreign policy experts for being juxtaposed with Trump’s praise for autocrats.

This week, Trump was caught on camera in a North Korean propaganda video saluting one of Kim’s generals at the Singapore summit, despite his past criticisms of Obama for shows of respect to the likes of the Japanese emperor.

Trump’s main evidence for Obama’s weakness was his predecessor’s failure to uphold a so-called red line against Syria’s use of chemical weapons in its civil war. Trump’s two missile attacks against the Assad regime in Syria, for using such weapons, have stood out as rare instances in which he has cited human rights as grounds for action.

Early in his presidency, Trump initially declined to express a clear commitment to NATO’s Article Five clause, under which an attack on a member state is considered an attack on all. Burns, who was the U.S. ambassador to NATO during the Sept. 11, 2001, terrorist attacks, recalls Canadian officials calling him immediately to offer their support, in keeping with Article Five.

“They went into Afghanistan with us,” Burns said. “You can’t buy that kind of allegiance in the world. It comes from 70 years of being faithful, not casting that aside because we’ve got a trade deficit with one of them. If you throw this away, there are direct consequences for the American people.”

While Trump’s approach is unique among presidents, his worldview has been consistent over the years. During a 1990 interview in Playboy, Trump criticized Russian President Mikhail Gorbachev for lacking “a firm enough hand” when the country’s communist system collapsed. He compared Gorbachev unfavorably to Chinese leaders’ bloody suppression of pro-democracy protests in 1989.

“When the students poured into Tiananmen Square, the Chinese government almost blew it,” Trump said then. “Then they were vicious, they were horrible, but they put it down with strength.”

As president, Trump has maintained that view of Chinese authority, even as he fights its trade policies. During an interview with Fox anchor Bret Baier this week, he called Chinese President Xi Jinping “an incredible guy,” and celebrated his consolidation of power.

“President for life! That’s pretty good,” Trump said, echoing comments he made in March after Xi engineered a vote in the National People’s Congress that ended the Chinese constitution’s term limits on the presidency.

During the same interview, Trump repeatedly referred to Kim as “Chairman Kim,” in contrast to his use of familiar first-person names — “Justin,” “Angela” and “Emmanuel” — when he refers to the heads of state of democratic allies Canada, Germany and France.

“When you take over a country — tough country, tough people — and you take it over from your father, I don’t care who you are, what you are, how much of an advantage you have, if you can do that at 27 years old, I mean that’s one in 10,000 that could do that,” Trump said. “So he’s, he’s a very smart guy. He’s a great negotiator. But I think we really understand each other.”

Trump’s supporters have tended to ignore his praise for dictators, or justify it as part of a negotiating strategy. One close ally who is in touch with Trump’s national security team insisted the president was merely tweaking the media. Yet the ally conceded Trump’s praise for Kim has been over the top.

“His style when he’s dealing with other tough-guy tyrants is to go ahead and butter them up,” he said. “And sometimes he does go overboard.”