The president calls on Sessions to end Russia investigation, but that may not be illegal. 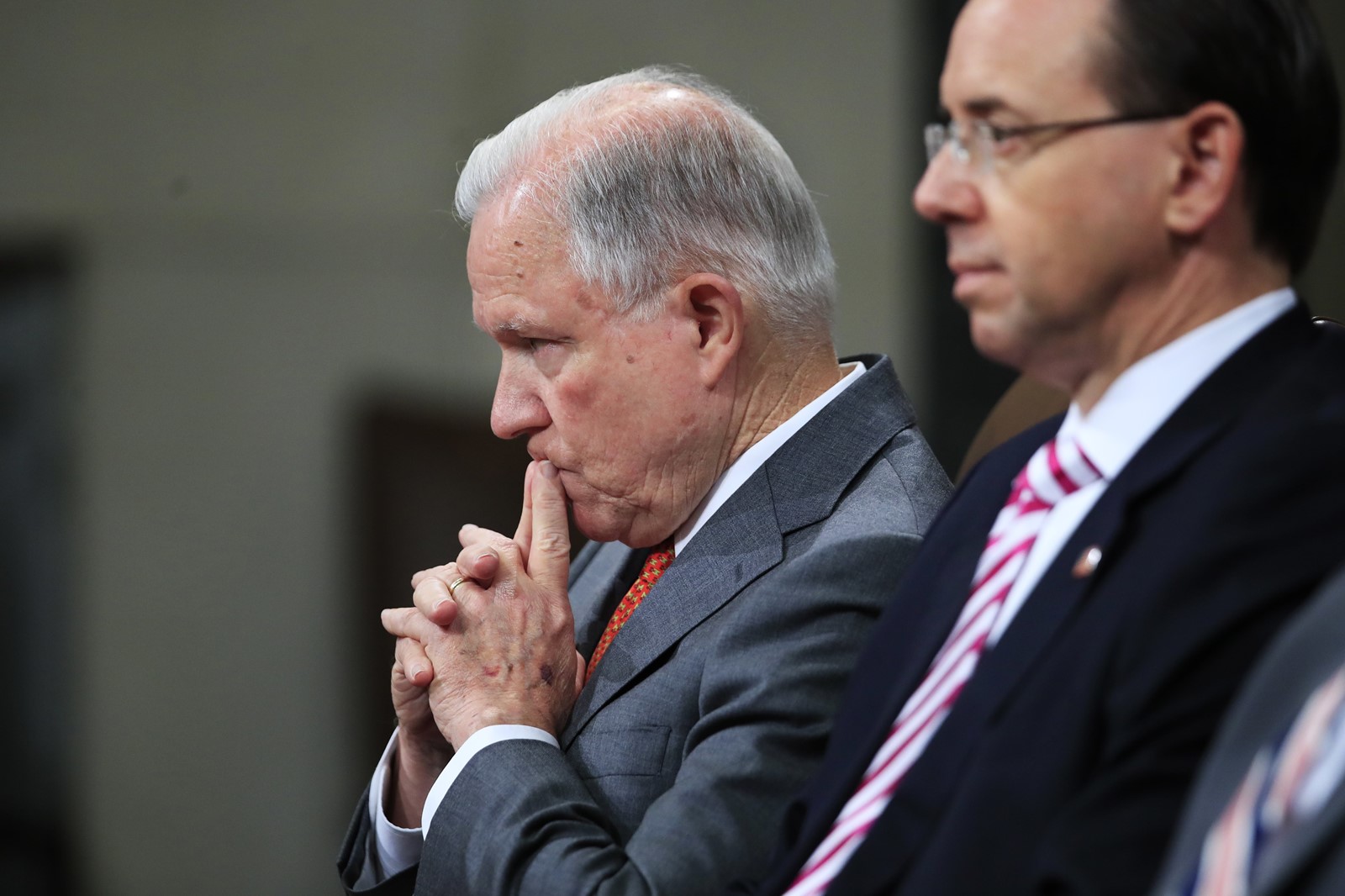 President Trump called on Atty. Gen. Jeff Sessions to “stop this Rigged Witch Hunt right now” on Wednesday, opening the president to further complaints that he is trying to obstruct the investigation into Russia’s election interference and his campaign’s possible complicity.

Trump is already reportedly under investigation for potential obstruction of the Russia inquiry led by special counsel Robert S. Mueller III. The tweet early Wednesday was the president’s most explicit statement to date aimed at ending the probe.

The tweet and several others Wednesday morning reflected the president’s accelerated attacks on the investigation, which he says is tainted by bias. They coincided with the second day of the trial of Paul Manafort, Trump’s former campaign chairman, on 18 charges of tax evasion, bank fraud and conspiracy.

“This is a terrible situation and Attorney General Jeff Sessions should stop this Rigged Witch Hunt right now, before it continues to stain our country any further,” Trump wrote. “Bob Mueller is totally conflicted, and his 17 Angry Democrats that are doing his dirty work are a disgrace to USA!”

Manafort’s trial continued in Alexandria, Va., with testimony from several prosecution witnesses, including a political consultant who worked with him in Ukraine for the pro-Russia government at the time; an FBI agent who helped search his condo last year; and an employee from a menswear store who said Manafort paid for custom suits with wire transfers from overseas accounts.

Prosecutors have accused Manafort of using more than 30 such accounts in three countries — Cyprus, the Seychelles, and St. Vincent and the Grenadines — to avoid paying U.S. taxes on $15 million in income.

The president suggested in a tweet that Manafort was being treated worse than Al Capone, the Chicago gangster prosecuted for tax evasion. “Where is the Russian Collusion?” Trump added.

“The President of the United States just called on his Attorney General to put an end to an investigation in which the President, his family and campaign may be implicated,” Schiff tweeted. “This is an attempt to obstruct justice hiding in plain sight. America must never accept it.”

The Justice Department says a president cannot face criminal charges while in office. But depending on what Mueller uncovers, Congress could pursue impeachment. The House impeached President Clinton for perjury and obstruction in 1998, when Congress likewise was under Republicans’ control, but the Senate acquitted him.

Contrary to Trump’s tweet, Sessions can’t stop the investigation because he recused himself from it over a year ago. Deputy Atty. Gen. Rod Rosenstein became responsible for the inquiry, appointed Mueller and supervises his work.

“It’s a tweet that’s just blowing in the wind, because Sessions has already recused himself from the Russia investigation,” said John Yoo, a UC Berkeley law professor who served in President George W. Bush’s administration.

But the episode again forced the White House and Trump’s allies to defend a tweet aimed at undermining the investigation.

Although the White House and the Justice Department have said that Trump’s tweets are official presidential statements, his lawyer Rudolph W. Giuliani brushed off suggestions that the tweets could be used as evidence of obstruction.

“The president was expressing his opinion on his favored medium for asserting his 1st Amendment right of free speech,” Giuliani said in an interview. “He said ‘should,’ not ‘must,’ and no presidential order was issued or will be.”

Giuliani told CBS’ “Face the Nation” on Sunday that “obstruction by tweet is not something I think works real well. Generally obstruction is secret, it’s clandestine, it’s corrupt.”

For months, Trump’s lawyers have said it’s impossible for the president to obstruct justice because his authority extends over the Justice Department. That allows him to direct officials where to focus their resources or to fire them, as Trump did in removing James B. Comey as FBI director last year. That firing led to Mueller’s appointment as special counsel.

Wednesday’s tweet was a reminder of Trump’s anger at Sessions for recusing himself on March 2, 2017, as members of both parties and legal experts contended he should have.

Sessions pointed to Justice Department regulations to explain that, as one of Trump’s earliest and most active supporters, he shouldn’t participate in the investigation of the Trump campaign. He announced the decision after controversy over his own undisclosed contacts with then-Russian Ambassador Sergey Kislyak during the campaign and the post-election transition.

Two months ago, Trump tweeted that he should have chosen an attorney general who didn’t need to recuse himself.

Joseph diGenova, a former U.S. attorney who was nearly hired to represent Trump, said the president was “completely disgusted” with Sessions. “He doesn’t like weak people,” DiGenova said in an interview with The Times. “And he thinks Jeff Sessions is extremely weak and not a competent leader.”

In his latest tweets, Trump also quoted criticism of the investigation from Alan Dershowitz, a Harvard Law School professor who frequently defends him. In an interview, Dershowitz also cast doubt on whether Trump’s tweets can be seen as an act of obstruction.

“You cannot obstruct justice by openly exercising your 1st Amendment rights and openly criticizing a prosecution, whether you’re right or wrong,” he said. “Obstruction of justice is generally committed behind the scenes, so I think both sides are a little overwrought here.”

Dershowitz also acknowledged that Trump was mistaken in suggesting Sessions could end the investigation.

University of Texas law professor Stephen Vladeck said Trump would need to take different steps to halt the inquiry: He could give the order to Rosenstein and fire him if he does not comply, or replace Sessions with someone with no conflict of interest, allowing that person to order Rosenstein to end Mueller’s investigation.