A reckoning for Trump’s healthcare cuts 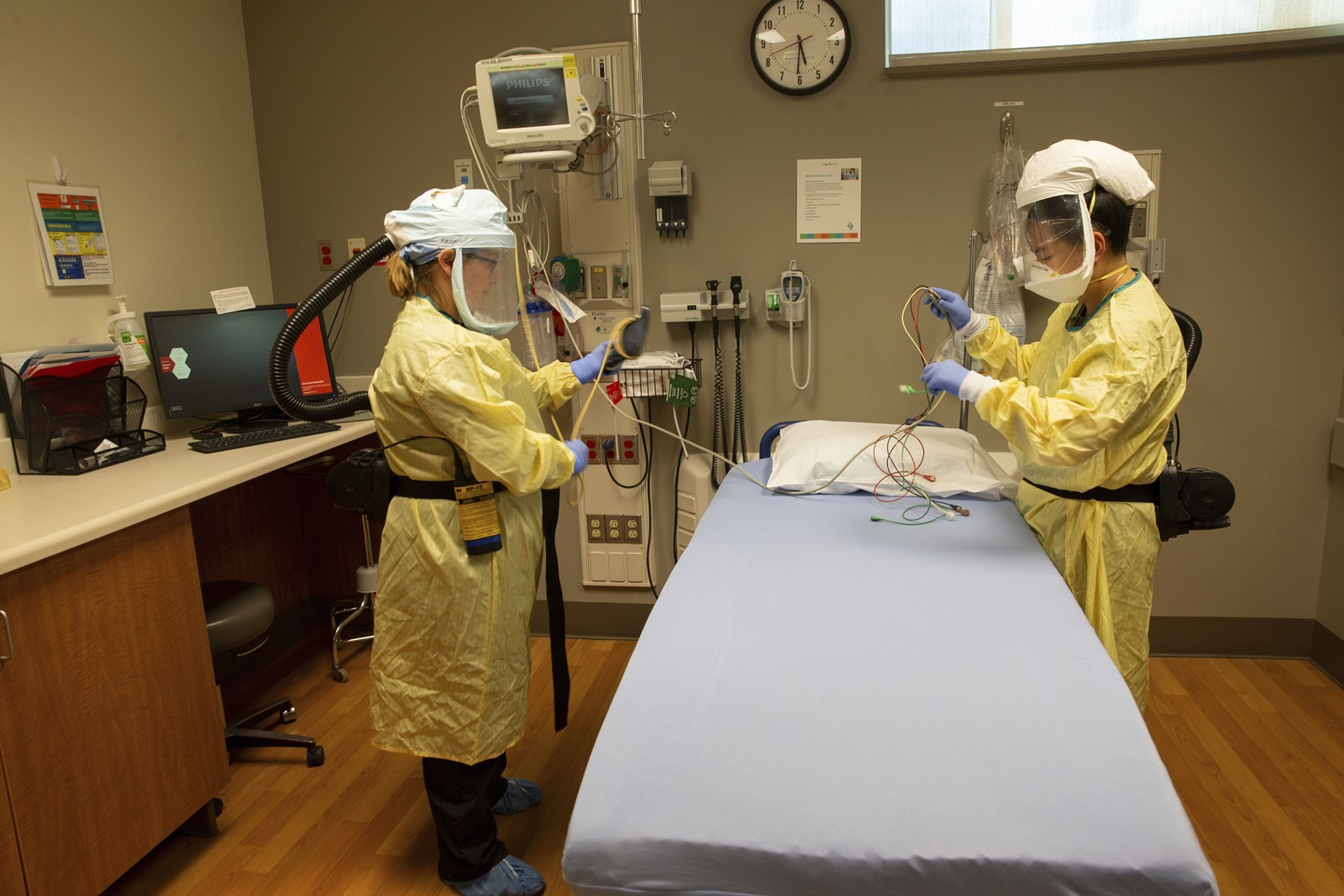 NURSES Lindsay Bowker, left, and Katherine Schumacher prepare to treat a suspected COVID-19 patient at EvergreenHealth hospital in Kirkland, Wash., near the initial epicenter of the U.S. coronavirus epidemic. (Karen Ducey For The Times)
PREVIOUS IMAGE

The widening coronavirus pandemic is forcing the Trump administration to pause, and even reverse, its years-long effort to roll back healthcare regulations and restrict access to the nation’s medical safety net.

As more Americans are sickened, officials are now pushing for government protections they once said were unnecessary.

President Trump and his deputies have urged health insurers to make testing for the coronavirus free to patients, calling it an “essential benefit,” despite years of pushing to loosen federal rules on what health insurance plans must cover.

And the administration is now moving to make it easier for poor Americans to get care through Medicaid, after championing multiple efforts over the last three years to slash the joint federal and state program and cut millions of people from its rolls.

Public health experts have mostly welcomed the moves. But many note that the actions forced by the coronavirus underscore the fundamental problems with the Trump administration’s healthcare agenda.

“Having tens of millions of Americans without insurance or with inadequate coverage is particularly concerning during a public health emergency, though in a sense, coronavirus simply makes more palpable and immediate the ramifications of opposition to coverage expansion,” said Dr. Benjamin Sommers of Harvard University’s T.H. Chan School of Public Health, who has extensively documented how health insurance improves patients’ health.

“People without adequate health insurance will get sicker, become poorer, and die younger than if they had insurance,” Sommers said.

Under Trump, the number of uninsured Americans has steadily ticked upward after years of decline. As the coronavirus crisis has intensified, administration officials now increasingly stress their eagerness to extend health protections to more Americans.

“We are especially mindful of our beneficiaries with underlying health conditions,” said Seema Verma, who oversees Medicare and Medicaid as CMS chief. The agency, she said, “is doing everything in its power to help states eliminate any barriers or delays in their care.”

That is a marked departure from many of the policies Trump and his deputies, including Verma, have advocated over the last three years.

She and other senior administration health officials strongly backed the unsuccessful push by congressional Republicans in 2017 to roll back the Affordable Care Act, helping the lawmakers write the repeal legislation that ultimately collapsed in the Senate. It would have stripped Medicaid coverage from tens of millions of Americans, many suffering from chronic illnesses, according to independent analyses.

The White House then made common cause with Texas and other Republican-led states suing to wipe out the 2010 healthcare law, often called Obamacare. The lawsuit is set to be heard by the U.S. Supreme Court later this year.

And in February, the White House proposed a federal budget for the coming fiscal year that would cut some $200 billion in federal aid to states for Medicaid, which currently insures more than 70 million low-income Americans.

“Putting up barriers to coverage has been a big part of this administration’s healthcare agenda,” said Joan Alker, who heads the Center for Children and Families at Georgetown University.

Even as the efforts to scrap Obamacare stalled, the Trump administration encouraged conservative states to explore other ways to restrict eligibility for Medicaid.

CMS strongly backed state efforts to impose work requirements on Medicaid enrollees, a bureaucratic hurdle that caused thousands of people to lose coverage in Arkansas before a federal judge halted the initiative, calling it inconsistent with Medicaid law.

And the agency cleared several states, including Arizona, Florida and Iowa, to limit the ability of poor patients to enroll in Medicaid coverage after they got sick.

Restrictions on insurance coverage are particularly problematic during an epidemic like the coronavirus pandemic, according to public health experts. Yet removing barriers to insurance is vitally important even when there isn’t an infectious disease outbreak, said John Auerbach, head of the nonprofit Trust for America’s Health.

Similarly, health advocates say, strict government standards for health plans, hospitals and nursing homes help ensure that patients are protected, whether there is a pandemic or not.

In recent years, however, the administration pushed to relax rules enacted in the Affordable Care Act requiring health plans to cover a basic set of benefits, such as prescription drugs and hospital care.

But there is growing evidence that these limited plans — which often cap how much they will cover — leave patients with unexpected medical bills if they get sick.

The administration has similarly been working to loosen rules on nursing homes. In November, CMS proposed new rules that would no longer require facilities to employ infection-control specialists. Poor infection control at a nursing home outside Seattle has been blamed for a particularly deadly outbreak of COVID-19, the illness caused by coronavirus.

“This just highlights the problems with pulling back on regulations,” said Toby Edelman, a senior attorney at the nonprofit Center for Medicare Advocacy, which has opposed efforts to weaken the rules.