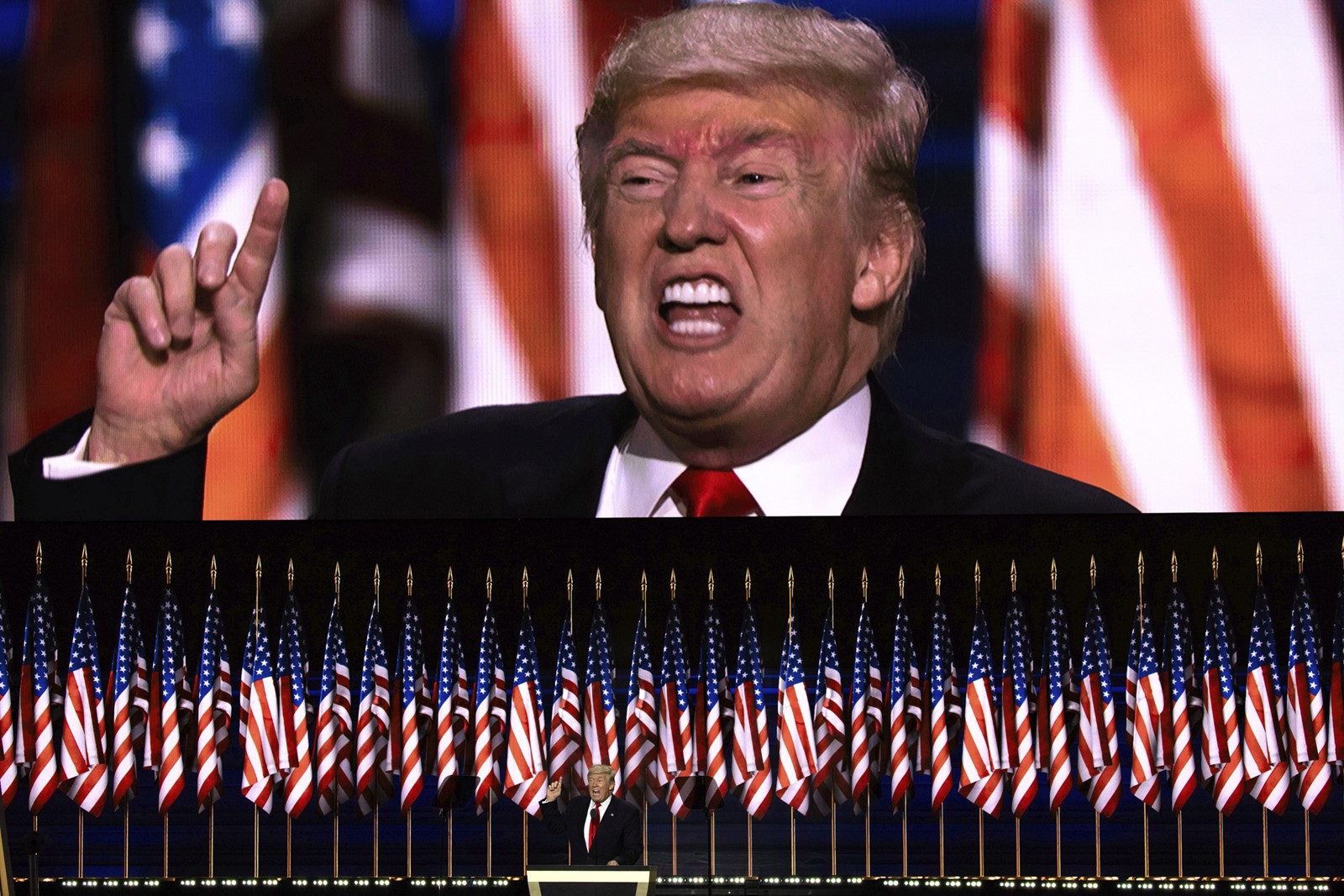 FOR HISTORIANS, President Trump’s policy wins and losses may mean less to his legacy than his impact on the institution of the presidency. Here, he speaks as the nominee at the 2016 Republican National Convention. (David Hume Kennerly Getty Images)
PREVIOUS IMAGE

Four years ago, when Donald Trump accepted the Republican presidential nomination in a Cleveland basketball arena, he painted a dark portrait of a nation in crisis. “I alone can fix it,” he vowed.

In April this year, as a deadly contagion scythed the land and millions lost their jobs, Trump deflected all blame for his administration’s failure to control the coronavirus. “I don’t take responsibility at all,” he said.

As Trump prepares to accept his party’s nomination again on Thursday, this time from the splendor of the White House, his legacy after one term is the vast political chasm between his grandiose promises and slipshod delivery.

He has kept some of his 2016 campaign pledges, cracking down on immigration and nullifying dozens of Obama-era regulations and diplomatic achievements. But Trump’s successes are deep in the penumbra of a devastating pandemic, economic calamity and painful racial reckoning, all on his watch.

Even the promises he has fulfilled have come with caveats.

Rather than building a wall along the 1,954-mile-long border with Mexico, as he vowed, he has built or refurbished roughly 200 miles — and Mexico didn’t pay a penny.

He enacted the largest overhaul of the tax code in three decades and a criminal justice reform bill, just as he said, but failed to overturn the Affordable Care Act or offer a plan to repair roads, bridges and other infrastructure.

He put two conservatives on the Supreme Court, but judges have blocked several of his executive orders on immigration and the environment. He pulled the United States from arms control, climate and other international accords, opening up a deep rift with U.S. allies. He revamped a trade agreement with Mexico and Canada, but failed to achieve the sweeping deal with China he claimed would be easy.

For historians, Trump’s policy wins and losses may figure less in his legacy than his caustic personal impact on the institution of the presidency. He has purged government agencies of critics, gutted federal oversight and expertise, and pushed the limits of executive power to protect himself and his inner circle.

Trump will go down in history as only the third president to be impeached — and the first to then run for reelection. Just months after he was acquitted in the Senate, the constitutional crisis of last fall already seems like just another fading plot line from a presidency constantly embroiled in controversy, melodrama and scandal.

The November election is a referendum, in large part, on Trump’s performance in office. The outcome will help determine his place in the history books.

“If he gets reelected, he’s changed the presidency forever,” said Douglas Brinkley, a professor of history at Rice University. “Right now, he’s a cult figure. You can say he’s ranked at the bottom of American presidents alongside James Buchanan, but there is no cult around James Buchanan. Trump will be around in history for a long time because his supporters will think he’s as great as Lincoln.”

His greatest challenge has been the coronavirus outbreak, the kind of unforeseen cataclysm that only a handful of presidents ever face. But by almost any measure, he failed to harness the nation’s resources and grit to prevent needless deaths and confusion. Polls show Americans overwhelmingly disapprove of his response.

For weeks, Trump downplayed the threat or insisted it was under complete control. When the emergency worsened, he claimed he had near-total authority to act, and then abruptly insisted that governors must take charge. As hospitals have sought critical supplies, and the death toll has soared to the worst by far in the world, he has touted unproven drugs and dangerous therapies.

“The American people yearn for national leadership in crises, for a president who recognizes such moments as a time for unity,” said Timothy Naftali, a presidential historian at New York University, who compared the challenge of fighting the pandemic to the Japanese attack on Pearl Harbor that brought America into World War II, and the Sept. 11 attacks that launched a global war on terrorists.

“Instead of promoting national resolve, Trump began to confuse people about the nature of the challenge, and for that he will always be remembered because it inevitably led to unnecessary deaths,” Naftali said. “He created a false sense of security in a crisis, and Americans don’t forgive lies from their government.”

Trump has also frayed the social fabric like no other modern president. Tweeting at all hours, he has unleashed more than 20,000 false or misleading claims since taking office, flouting ethical norms and fanning the flames of sexism, nativism and racism.

His supporters have praised his “authenticity.” His detractors have denounced him as a demagogue.

Six months ago, Trump planned to seek reelection on a record of economic growth, no foreign wars and domestic accomplishments that included tax cuts and deregulation, criminal justice reform and more than 200 new conservative judges on the federal bench.

“In the areas where he followed a traditional conservative or Republican policy, he was wildly successful,” said Michael Steel, former top aide to GOP House Speaker John A. Boehner.

But Trump’s chaotic approach to governing was evident from his first week, when he signed an executive order banning migrants or visitors from seven predominantly Muslim countries. It fulfilled a campaign promise but spawned tumult at airports and widespread protests.

Courts swiftly struck the Muslim ban down, foreshadowing a shoot-first, aim-later policymaking process that hampered the administration’s effectiveness for most of Trump’s tenure. After a second effort was also nullified, Trump’s third, more limited order was narrowly upheld by the Supreme Court in June 2018.

Determined to unwind Obama administration initiatives, Trump has rolled back dozens of environmental regulations on energy and resource extraction, safety rules that he claimed were onerous to businesses, and fuel economy standards for new automobiles. Many others have been blocked in court.

Trump has arguably had his greatest success in advancing his controversial agenda to restrict immigration.

While he failed to build much of his border wall, he imposed harsh new restrictions on legal immigration, including for those seeking asylum, and his administration declared “zero tolerance” for illegal entries in 2018.

But when thousands of children were separated from their parents in makeshift detention centers on the border, the political backlash at the “kids in cages” was so intense that Trump suspended the practice.

Border apprehensions have plummeted in recent months, although that may be due to fewer jobs available during the pandemic and a normal slowdown in the summer’s baking heat.

Mark Krikorian, a staunch restrictionist who heads the Center for Immigration Studies in Washington, credits Trump for doing more than any other president to reduce the influx of undocumented immigrants, but also harbors some disappointments, including a failure to strengthen protections for U.S. workers.

“Almost all of the changes they’ve made, a subsequent administration can get rid of them because they’re not set in legislation,” Krikorian said.

Despite his repeated threats, Trump never cut federal funding for so-called sanctuary cities, and his effort to repeal President Obama’s Deferred Action for Childhood Arrivals order, one of his 2016 campaign promises, was blocked by the Supreme Court.

Republicans lost control of the House in the 2018 election, limiting Trump’s ability to pass legislation. Polls showed widespread opposition to his efforts to gut Obamacare and growing disenchantment with the dysfunction in the White House.

Trump has kept his word on pursuing what he called an “America first” foreign policy, an isolationist approach that has seen America pull back sharply from global engagement and leadership.

He withdrew the U.S. from the 2015 deal to curb Iran’s nuclear program, the Paris agreement on climate change, the Open Skies global surveillance treaty, the Intermediate-Range Nuclear Forces Treaty with Russia and other international agreements. He even cut U.S. funding to the World Health Organization during the pandemic.

But Trump’s most ambitious efforts overseas — achieving a Mideast peace deal and nuclear disarmament in North Korea — have come to naught.

His self-described “love letters” and three face-to-face meetings with Kim Jong Un failed to persuade the North Korean leader to give up his nuclear weapons, or even stop producing more.

In 2018, Trump kept a promise to move the U.S. Embassy in Israel from Tel Aviv to Jerusalem, which he also recognized as Israel’s capital — a slap to Palestinians, who also consider it their capital.

But his efforts to secure a regional peace deal have gone nowhere aside from one breakthrough. Two weeks ago, the United Arab Emirates became the third Arab country to normalize relations with Israel. Other Arab states could follow.

He stunned U.S. allies by threatening to pull out of the NATO military alliance and by cozying up to Russian President Vladimir Putin, whom Europe views as a direct threat. He has expressed disdain for his counterparts, upending summits with bluster, threats and insults.

“The level of trust between the U.S. and Europe is at the lowest level in decades, and that’s solely because of Trump and his administration,” said Rachel Rizzo, an expert on Europe at the Truman Center, a Washington think tank.

Intent on avoiding military conflict and cutting back U.S. forces overseas, Trump’s use of force has been sporadic and unpredictable — including a missile strike in Iraq in January that targeted and killed a senior Iranian official, Maj. Gen. Qassem Suleimani.

The president’s “maximum pressure” campaign against Tehran, including pulling out of the nuclear deal and imposing stiff new sanctions, failed to push Iran back to the negotiating table, as Trump had hoped. But it also didn’t start a wider conflict, as many had feared.

Trump’s scattershot isolationism has dovetailed with his protectionist stance on trade, another key part of his legacy.

A two-year trade war with China led to a costly draw. The two sides agreed in January to a “phase one” deal that rolled back tariffs, but did not address the problems Trump had vowed to solve: intellectual property protection, technology transfers and currency practices. And he offset losses of American farmers — who are key to his base — with $62.5 billion in taxpayer-funded bailouts.

Through it all, Trump has led the nation much as he ran his family conglomerate from Trump Tower in New York, demanding loyalty and public praise from underlings, lashing out at slights and criticism, and treating domestic and foreign policy as a matter of political patronage.

“We normally judge presidents by the bills they pass and the wars they fight,” said David Gergen, a counselor to four presidents. “In this case, there’s an additional element of how Trump is undermining the presidency itself and leaving an institution that’s more distrusted than when he came in, and that makes it that much more difficult to govern.”

“The defining legacy of Trump is his demonstration that a person completely lacking in a commitment to liberal constitutional democracy can be elected president and that, as an ‘elected authoritarian,’ he or she can wield great power and do tremendous damage to the nation’s institutions and norms,” said Kevin C. O’Leary, a fellow at the Center for the Study of Democracy at UC Irvine.

Trump’s angry tweets and threats, and his fervid political base, have kept most Republican lawmakers in line.

“Trump’s single greatest bit of political savvy was terrifying Republican members of Congress that he would destroy them if they broke ranks,” he said.

But the 45th president, Brinkley said, has made his mark above all for his unabashed assertion of power in the service of self-interest and the way he has tested the durability of the Constitution itself.

“Trump wants to blow up the checks and balances. He has utter contempt for Congress and really for democracy,” Brinkley said. “That type of politician has been ubiquitous in world history. But it’s been confusing to us as a country because it’s never before taken root in the American land.”