Under fire for his abrupt Syria pullout, the president calls for an immediate truce. 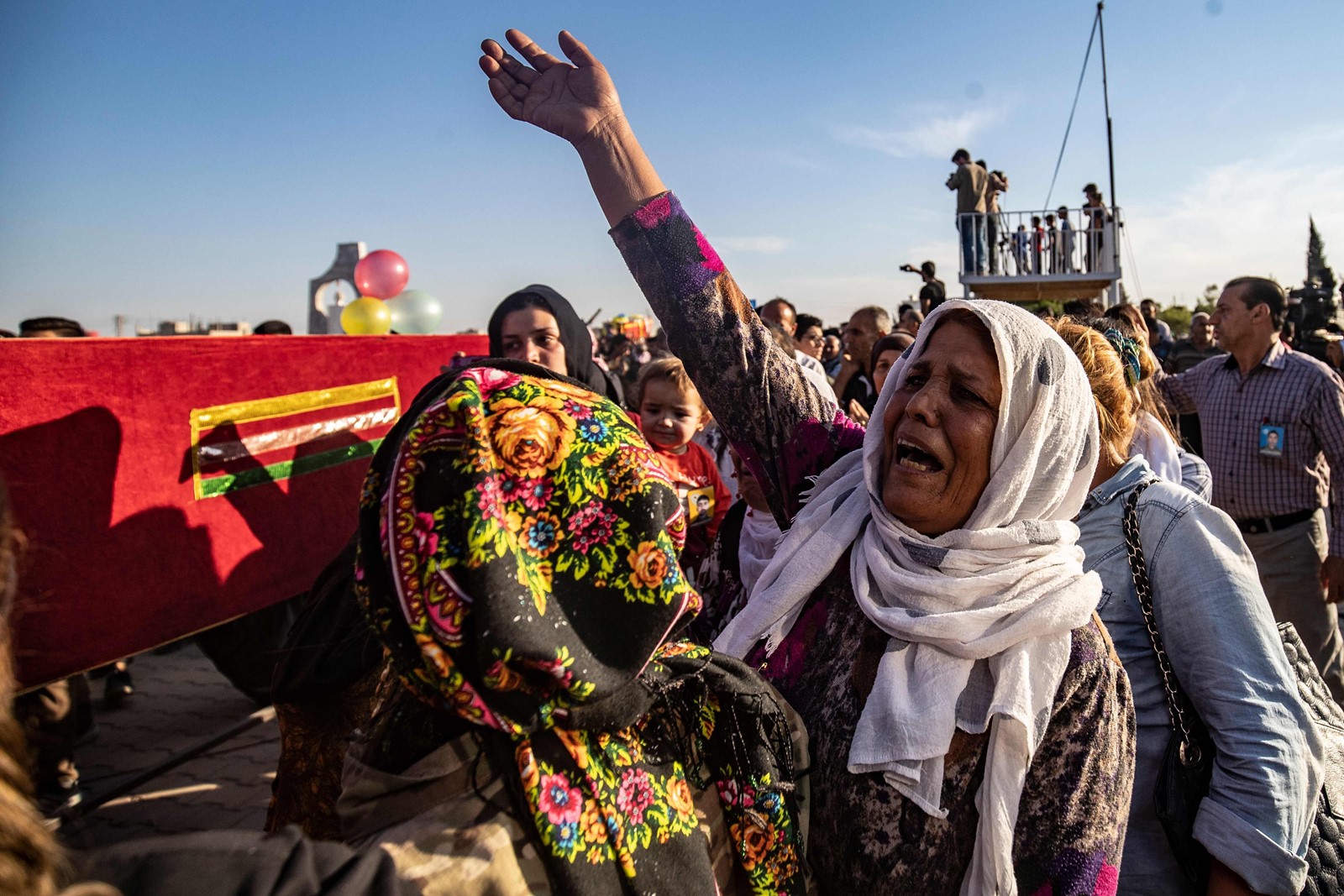 IN THE SYRIAN Kurdish town of Qamishli, mourners attend the funeral of five Syrian Democratic Forces fighters killed in battles against Turkish-led forces in Ras al-Ayn along the border between Syria and Turkey. (Delil Souleiman AFP/Getty Images)
PREVIOUS IMAGE

President Trump, facing blowback over his abrupt troop withdrawal from Syria amid reports that Islamic State detainees have escaped in the ensuing chaos, called for an immediate cease-fire Monday and imposed sanctions against three Turkish officials and two government agencies.

Just hours after Trump issued a statement that sanctions would be imposed “soon,” Vice President Mike Pence and Treasury Secretary Steven T. Mnuchin announced that the president spoke with Turkish President Recep Tayyip Erdogan and that the sanctions had been imposed.

“The United States will aggressively use economic sanctions to target those who enable, facilitate and finance these heinous acts in Syria,” Trump said in the statement released on his Twitter feed. “I am fully prepared to swiftly destroy Turkey’s economy if Turkish leaders continue down this dangerous and destructive path.”

Pence also told reporters that U.S. officials would be traveling soon to the Turkish capital, Ankara, in an attempt to find a solution to one of the most serious — and self-inflicted — foreign policy crises this administration has faced.

The withdrawal of U.S. troops from the Syrian border at Erdogan’s request led almost immediately to a Turkish invasion and heavy Kurdish casualties, prompting a broad and bipartisan outcry in Washington.

It has also led to an unexpected alliance between Kurdish militia fighters — until last week, close U.S. allies — and the Syrian army, which is aligned with U.S. adversaries Russia and Iran. On Monday, Syrian units blitzed into Kurdish-held areas, state media and activist groups reported. They were racing to gain control of the region before it could be overrun by Turkish forces, who are supported by Syrian opposition rebels who have been trying to overthrow President Bashar Assad.

Convoys of Syrian army vehicles deployed across the Kurdish-held territory, including the towns of Tabqa and Ain Issa, entering for the first time areas that the government had lost more than five years ago and which only a day before had been under U.S. stewardship.

Pro-Assad journalists and activists also reported government troops bunkered on the outskirts of the northern city of Manbij, once home to a U.S. base. They also posted images of soldiers entering Tal Tamr, a village roughly 18 miles south of the Syrian-Turkish border. It is on the M4, a strategic highway running east-west that opposing forces need to ferry supplies. It also serves as the main logistics route for U.S. forces in and out of the country.

Since the operation’s start on Wednesday, Turkey has established a foothold in two strategic areas along the border, completing the first phase of an operation that aims to control a buffer zone. The offensive has made swift gains, but it has also left chaos in its wake.

The United Nations said about 150,000 people have been displaced, while the Syrian Observatory for Human Rights, a pro-opposition monitoring group, put the number at 250,000. At least 69 civilians have been killed since the operation began.

In Washington, lawmakers, concerned about emboldening Islamic State and the betrayal of Kurdish fighters, are working together on a resolution condemning Trump’s decision and legislation to impose sanctions against Turkey.

Trump, whose global business interests have included office towers in Istanbul, also announced in his statement the reimposition of 50% steel tariffs, which the president had dropped to 25% this year. The new tariffs were unlikely to cause damage to Turkey’s steel industry, where U.S. purchases account for only about 5% of exports.

“Strong sanctions, while good and justified, will not be sufficient in undoing that damage nor will it stop the consequences stemming from the ISIS jailbreak,” Sens. Charles E. Schumer of New York, Robert Menendez of New Jersey and Jack Reed of Rhode Island said in a statement, using an acronym for Islamic State. “The first step when Congress returns to session this week is for Republicans to join with us in passing a resolution making clear that both parties are demanding the president’s decision be reversed.”

Defense Secretary Mark Esper said Monday that Turkey’s invasion had “resulted in the release of many dangerous ISIS detainees,” along with “widespread casualties, refugees, destruction, insecurity and a growing threat to U.S. military forces.”

“Withdrawing U.S. forces from Syria would recreate the very conditions that we have worked hard to destroy and invite the resurgence of ISIS,” he said, adding that it would create a power vacuum readily exploited by Iran and Russia.

Trump stood by his decision to withdraw U.S. troops from northern Syria, which has enabled Turkey’s onslaught. He said that the roughly 1,000 troops leaving Syria will “redeploy and remain in the region” to prevent Islamic State from regaining strength in a military vacuum.

Trump’s statement came moments after two other tweets in which he asserted that it wasn’t the United States’ responsibility to protect the Syrian border. “Anyone who wants to assist Syria in protecting the Kurds is good with me, whether it is Russia, China, or Napoleon Bonaparte,” he tweeted. “I hope they all do great, we are 7,000 miles away!”

Esper said the Pentagon was “executing a deliberate withdrawal of U.S. military personnel from northeast Syria,” saying the roughly 1,000 troops there were “at risk of being engulfed in a broader conflict.”

He said Erdogan was responsible for “a potential ISIS resurgence, possible war crimes and a growing humanitarian crisis.”

U.S. troops will move into Iraq in coming days, some leaving by road and others by airlift, a senior U.S. official said. A small contingent of U.S. special forces troops will remain in Syria, farther south near the town of Tanf, the official added.

Meanwhile, Turkish troops and their Syrian rebel allies, taking advantage of the Kurdish collapse, pressed deeper in their assault on northern Syria, setting the ground for a confrontation against Syrian army units in Tal Tamr and Manbij. On Monday, Erdogan downplayed the chances of clashes between the two armies, saying Russia — Assad’s ally — had seen “a positive approach” to Turkey’s border operations.

The developments signal not only a major turning point in Syria’s eight-year war, but also an unraveling of years of U.S. policymaking, which had placed the Kurdish-led fighters at the center of a plan to counter Islamic State, contain Iranian and Russian ambitions and choke the Syrian government.

The Kurdish fighters, once the nexus of a U.S.-backed grouping of militias known as the Syrian Democratic Forces, had been Washington’s Syrian proxy against Islamic State. With support from a U.S.-led coalition, they rolled back the extremists’ gains while constructing a quasi-state in northeastern Syria, touting it as an alternative to Assad’s rule.

Esper said he would travel to the North Atlantic Treaty Organization headquarters in Brussels next week to press allies to take “diplomatic and economic measures in response to these egregious Turkish actions.”

He did not mention Trump’s decision to pull back U.S. troops from the Syria-Turkey border or Trump’s Oct. 6 phone call with Erdogan, which was widely seen as giving Ankara implicit permission to carry out the invasion.

Turkey views the Kurdish militia as a splinter of the Kurdistan Workers Party, a separatist guerrilla group that has waged a decades-long insurgency war against Ankara.

Meanwhile, lawmakers on Capitol Hill prepared bipartisan legislation to sanction Turkey as well as a resolution to condemn the president’s decision to withdraw from Syria.

The unlikely pair of Speaker Nancy Pelosi (D-San Francisco) and Sen. Lindsey Graham (R-S.C.), one of Trump’s closest allies on Capitol Hill, said they would work together on the joint resolution, Pelosi said in a tweet.