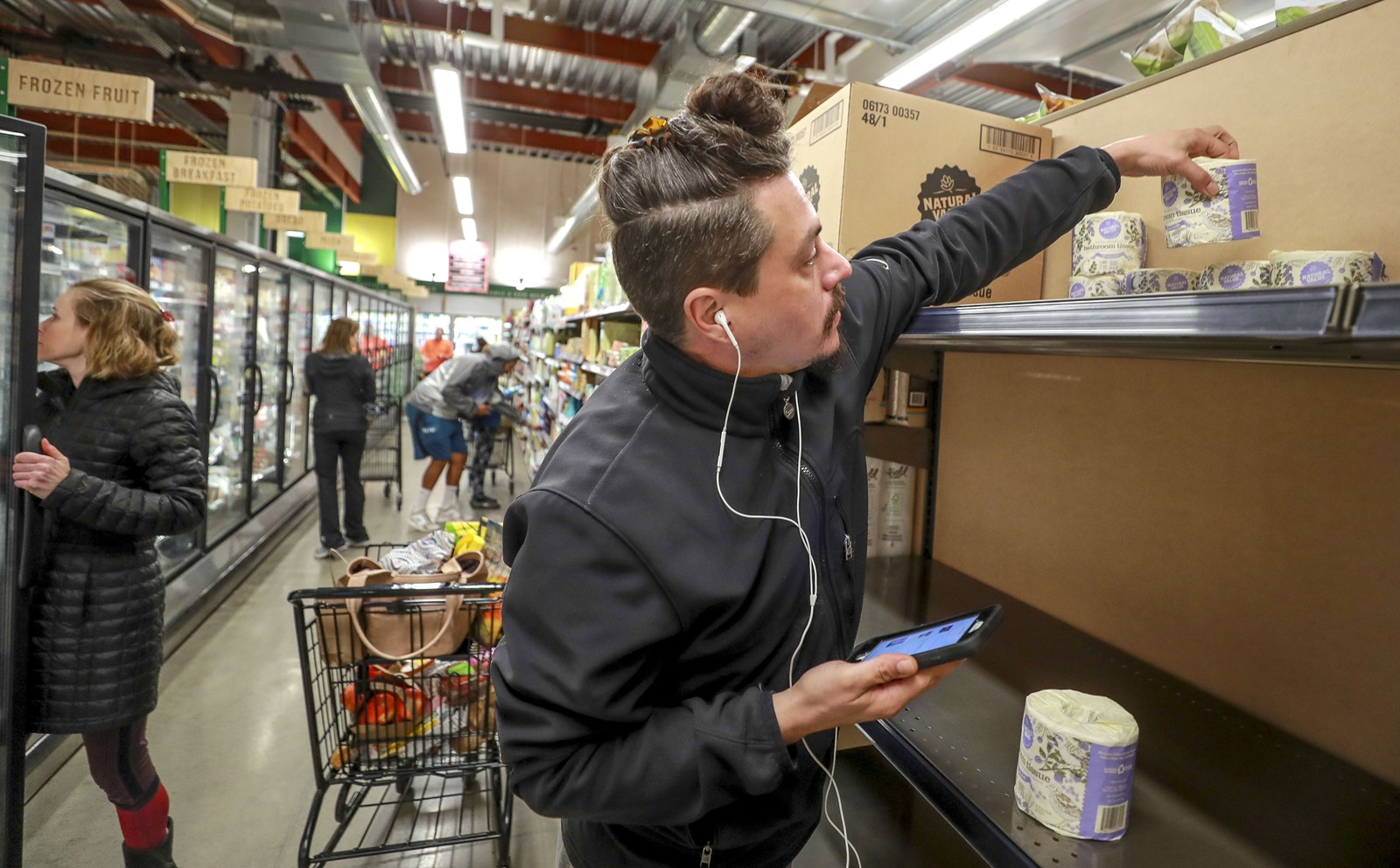 As the coronavirus pandemic has spread, Americans have taken to stores to clear out shelves of hand sanitizer, canned goods and other emergency rations.

According to some estimates, Americans use less than half a roll per week on average. According to others, the average is a little over one. Even at that upper limit, it would take a household of 15 to rip through just one Costco-sized 30-pack of Kirkland Signature two-ply over the course of a 14-day quarantine. For a couple, one pack should last for nearly four months.

If toilet paper was truly in short supply, some degree of stockpiling would be understandable. COVID-19 can manifest in gastrointestinal distress, in addition to its typical dry cough, fever and risk of pneumonia, and those feeling the symptoms should avoid public places such as the grocery store.

But despite the photos of empty shelves popping up on social media, is there in fact any risk to the nation’s toilet paper pipeline?

The short answer: no.

“It’s not like suddenly all the toilet paper factories in the world are burning down,” said Willy Shih, a professor at Harvard Business School who studies manufacturing supply chains. “They’re still cranking this stuff out.”

If anything, toilet paper supplies are suffering from being too steady, Shih says. Typically, demand for the product is flat proportional to the population — there is no hot season for toilet paper. That means that factories are designed to run as efficiently as possible around the clock to produce a constant stream of product, with little room for increase or decrease.

When that constant supply meets a spike in demand, shoppers suddenly run into empty shelves.

Toilet paper is also distinct from products such as hand sanitizer and coronavirus test kits, where increased use means that there is a genuine risk of shortages. Barring a new craze for mummy costumes, the actual use of toilet paper is unlikely to increase.

So even if stores are running out of toilet paper today, more rolls will keep showing up like they always have. Were toilet paper plants able to increase output, Shih says, that wouldn’t necessarily be a good idea.

“If you’re a supply chain professional, this is called the bullwhip effect,” he said, “an oscillation in supply that moves up the chain.”

If factories start producing more toilet paper than people could ever actually use in response to a temporary demand surge, then they’ll be left with far too much product on hand down the line.

Only people who are at higher risk of serious illness from the virus, either from age or other medical conditions, are truly in need of stockpiling enough toilet paper to last for the duration of the outbreak, since going back out to the store for fresh rolls may put their safety at risk (though delivery services should be available as supplies replenish).

Other countries with severe outbreaks have not suffered total shutdowns of stores or illness rates that disabled the logistics and paper industries. In Italy and parts of China that went into full lockdown, grocery stores remained open, as did factories producing essential products.

Even in the unlikely case of a major transportation shutdown, Los Angeles is sitting pretty when it comes to the supply chain. Nearby Oxnard is home to the state’s only major toilet paper factory, a Procter & Gamble plant that’s been producing Charmin toilet paper and Bounty paper towels since 1973.

Until recently, Orange County was home to the state’s second plant, a Kimberly-Clark mill in Fullerton that produced Scott toilet paper along with Kleenex and clinical wipes. That factory shut in 2018 after 62 years in operation.

The Oxnard plant is typical of toilet paper factories around the world. It has been running 24 hours a day, seven days a week for decades, and like most tissue plants, is within a day’s drive of a number of major metropolitan centers.

Since toilet paper is a relatively low-cost and high-bulk item — low value-density, in economics terms — there’s little incentive for manufacturers to ship products long distances or overseas. America imports a higher percentage of its toilet paper than most other nations, according to 2017 United Nations statistics, but those imports amount to only 9% of the total U.S. supply, with the majority of that coming from Canada and Mexico.

The total supply chain for toilet paper is relatively simple: trees are cut down in forested places such as the U.S., Canada, Scandinavia and Russia, ground into chips, and then processed into blocks of pulp, which are shipped to factories like the one in Oxnard for processing into their final form.

A typical Toyota, by contrast, requires about 30,000 parts sourced from a complex web of more than 2,000 separate companies spread across multiple continents.

The supply chain is even shorter for recycled toilet paper, which can be pulped locally and combined with freshly harvested wood.

In Oxnard, however, the line runs on pure virgin pulp, a practice that has drawn criticism from environmental groups, which argue that a product as disposable as toilet paper should at least contain some recycled fiber.

For now, factories are focused on just keeping their existing lines running at full capacity. Retailers, even those who have imposed toilet paper limits per customer, are clamoring for more product, to the point of short-circuiting the normal distribution routes to send trucks straight to factories to replenish supplies.

Thus it is a busy time for the industry.

Procter & Gamble, in response to an interview request on the inner workings of its Oxnard plant, replied with an emailed statement: “We are working diligently to ensure we can continue to serve customers and meet demand in the middle of a highly dynamic situation. We continue to manufacture and ship Charmin to our retailers.”

When the request for an interview with someone at the Oxnard plant was repeated, the P&G representative Alan Danzis sent his regrets.

“Any other time — we would love to,” Danzis wrote. “Unfortunately, P&G needs everyone incredibly focused on the task at hand.”