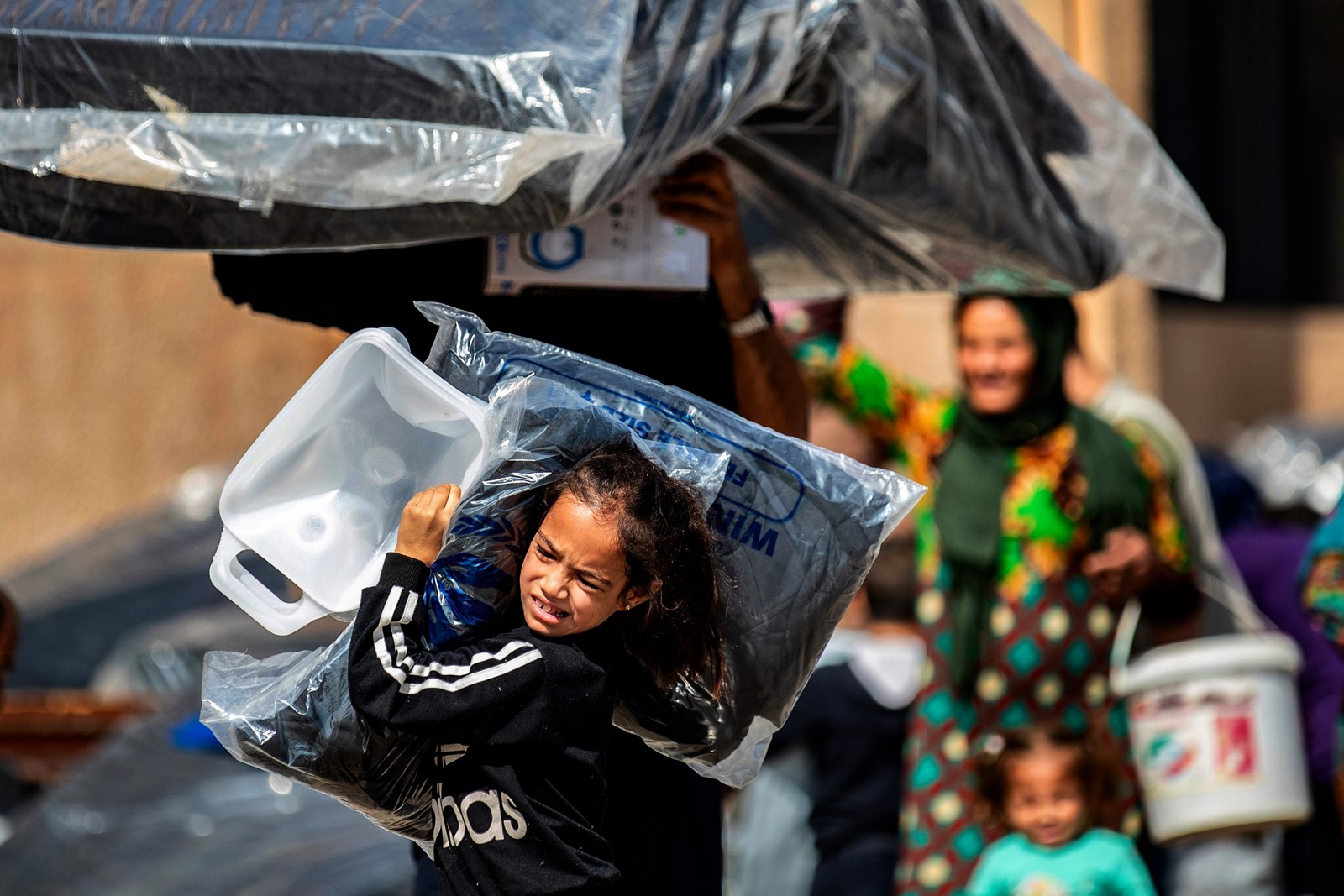 The Turkish Defense Ministry released a statement on Saturday saying that Ras al-Ayn “has been brought under control,” while Turkish news channels broadcast images of the town wreathed with plumes of smoke from a barrage of artillery fire.

Syrian rebel factions operating under the banner of the Turkish-forged Syrian National Army released video of their fighters spraying machine-gun fire down a dirt-covered thoroughfare near Ras al-Ayn’s eastern entrance. Other pictures purported to show them inside the town’s neighborhoods, tearing down signs for the Kurdish-allied military force, known as the Syrian Democratic Forces, and commandeering a Humvee the U.S. had supplied to the Kurds. But a spokesman for one of the factions said the rebels had yet to take control of the whole town. Breaching Ras al-Ayn, one of the two initial primary targets of the Turkish offensive, now in its fourth day, comes amid an increasing tempo of attacks despite worldwide condemnation of the Turkish government.

The takeover also injected further instability in Syria’s internecine civil war, which began in 2011 and has since devolved into a multi-front proxy conflict with sectarian-tinged bloodshed.

A rebel group fighting under the Syrian National Army banner said it had momentarily cut off part of the M4 highway, the main east-west artery running through the Kurds’ enclave to the Syrian-Iraqi border. The Syrian Democratic Forces later said it had reclaimed the area.

But during its brief control, the rebel group stopped Kurdish fighters’ vehicles and summarily executed some of them. A video released by the group’s cadres depicted them firing streams of bullets into the corpse of a uniformed Kurdish fighter they had apprehended moments before, to shouts of “God is great.” Pro-Kurdish activists claimed a prominent Kurdish politician was also killed. Since the assault began Wednesday, 40 civilians have been killed in northeastern Syria, said the Syrian Observatory for Human Rights, a U.K.-based monitor of violence in the country, and the United Nations said more than 190,000 people had been displaced.

Aid groups have warned of a looming humanitarian crisis, with civilians struggling to find shelter, food and water.

Fawaz Saido, a teacher from Tal Tamr, said his town was overcrowded with people seeking refuge. “There was no place for them to sleep,” Saido told the Rojava Information Center, a Syrian Kurdish think tank based in northeastern Syria. “We found places for them in schools, in private homes.... There’s no space left. Many people are sleeping in tents.”

Making matters worse, Saido said, has been a shortage of water since Turkish shelling damaged a water station in the city of Hasakah.

On the Turkish side of the border, three more civilians were reported killed on Saturday from Kurdish shelling and rocket fire, Turkish authorities said, bringing the civilian death toll there to 10.

The Turkish offensive began last week after President Trump ordered the withdrawal of U.S. troops from the border area, in effect giving his blessing for President Recep Tayyip Erdogan to rout the Kurdish militiamen, who had served as the main fighting force on behalf of the U.S. in its mission to force out Islamic State militants in Syria. Turkey considers the Kurdish militiamen a terrorist group related to Kurdish guerrillas locked in a decades-long insurgency against the government in Ankara.

Turkey aims to establish a 20-mile-wide strip of territory along the border with Syria where it will relocate the 3.6 million Syrian refugees still in Turkish territories.

Though Trump has insisted U.S. troops are not in harm’s way, the chances for attacks on remaining American personnel have increased as the scope of the offensive has heightened. On Friday, a number of artillery rounds landed a few hundred yards from a U.S. observation post near the Kurdish-controlled city of Kobani, the Pentagon said. No U.S. troops were wounded, and activists reported that they have since returned to the post. Hulusi Akar, Turkey’s defense minister, said Saturday that it “was out of the question” that his troops would target the observation post.

Instead, Akar said, Turkish forces were returning fire on a position less than a mile from the post. “Every kind of precaution was taken so no damage came to the U.S. base,” he said.

The invasion has prompted a raft of international sanctions against Turkey. On Saturday, Germany announced it would stop delivery of weapons to Turkey that could be used in the operation, following the lead of the Netherlands. A day earlier, the White House threatened to levy sanctions that were, according to Treasury Secretary Steven T. Mnuchin, “very powerful.”

“We hope we don’t have to use them,” Mnuchin told reporters Friday. “But we can shut down the Turkish economy if we need to.”

Yet the threat, like those issued by Trump and administration underlings over the last few days, left unsaid what exactly would trigger those sanctions. Congress, meanwhile, is considering a bipartisan sanctions bill, with critics of Trump saying the president’s threats have rung hollow.

Turkey has thus far shown no sign it will back off. On Saturday, in an interview with German broadcaster Deutsche Welle, Turkish Foreign Minister Mevlut Cavusoglu refused the idea of mediation with the Kurds.

“We don’t ... negotiate with terrorists. The only thing to be done is for these terrorists to lay down arms,” he said. “We tried the political solution in Turkey in the past and we saw what happened.”