Lawmakers vow to challenge Whitaker, who has disparaged Mueller’s Russia probe and could squelch it. 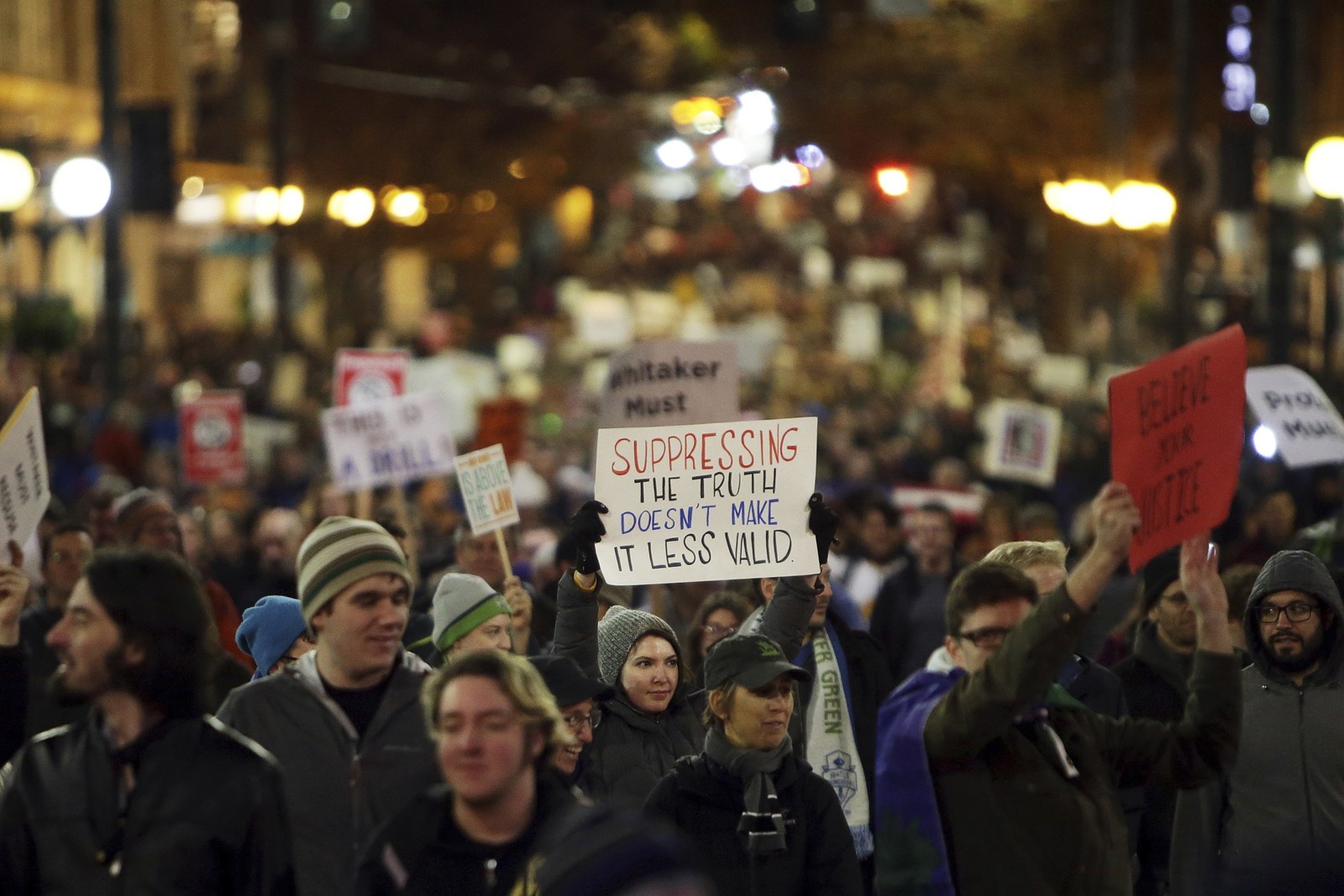 Matthew Whitaker, hastily installed when the President Trump ousted Atty. Gen. Jeff Sessions last week, has given no sign of bowing to demands that he recuse himself from overseeing the inquiry despite what Democrats say is clear bias.

Whitaker had repeatedly disparaged the Mueller investigation on TV and in print before Sessions named him his chief of staff last year. In one commentary, Whitaker suggested the inquiry could be strangled by curtailing funding for it — a power he now has.

Senate and House Democratic leaders sent a letter Sunday to the Justice Department’s ethics office, asking it to review Whitaker’s past statements and issue a formal recommendation on whether he should recuse himself.

Rep. Adam B. Schiff (D-Burbank), who is expected to lead the House Intelligence Committee in January, said that if Whitaker did not step aside from supervising the investigation, lawmakers would scrutinize his role and hold him accountable.

Whitaker, he said, “needs to understand that he will be called to answer.”

Similar warnings came from Rep. Jerrold Nadler (D-N.Y.), the expected head of the House Judiciary Committee. He said Whitaker would be “our very first witness” in January, summoned if necessary by subpoena.

Sessions incurred Trump’s lasting enmity when he backed away, almost at the start of his tenure as attorney general, from supervising the Mueller investigation. Sessions had played a senior role in the Trump campaign and initially misled fellow lawmakers about his dealings with Kremlin emissaries.

Democrats said Sunday they are considering what action to take if the White House resists congressional scrutiny not only of Whitaker, but also on whether Trump’s business dealings violate laws that bar federal officeholders from accepting gifts, payments or things of value from a foreign state or its representatives.

Rep. Elijah E. Cummings (D-Md.), in line to lead the House Oversight Committee, said on ABC’s “This Week” that he’s “not going to be handing out subpoenas like somebody’s handing out candy on Halloween.”

“I would ask that the president not try to stand in our way of doing our job as members of the Congress,” he added.

Cummings, Nadler and Schiff all signed the letter to the Justice Department’s ethics office, along with House Minority Leader Nancy Pelosi of San Francisco and Senate Minority Leader Charles E. Schumer of New York. So did the top Democrats on the Senate’s Judiciary and Intelligence committees, Dianne Feinstein of California and Mark R. Warner of Virginia.

“There are serious ethical considerations that require Mr. Whitaker’s immediate recusal from any involvement with the Special Counsel investigation of the Russian government’s efforts to interfere in the 2016 presidential election,” the Democratic lawmakers wrote.

Trump surrogates argued that Whitaker’s past criticism has no bearing on his current responsibilities.

“We are so far past the period where those comments were made by Matt Whitaker as a private citizen,” White House counselor Kellyanne Conway said on “Fox News Sunday.”

Conway also played down Trump’s contradictory comments about whether he knew Whitaker before appointing him.

After previously hailing him as a “great guy,” Trump said Friday that he didn’t know Whitaker before naming him the nation’s top lawman.

“The president does know Matt Whitaker,” Conway said. “It’s not like he’s putting a friend in there that he’s known his entire life,” she added.

“I’m confident that Mr. Mueller will be allowed to do his job without interference,” Graham said on CBS’ “Face the Nation.” “You don’t recuse somebody because they have opinions different than the people they’re overseeing.”