Getting into college is hard. A degree? Harder 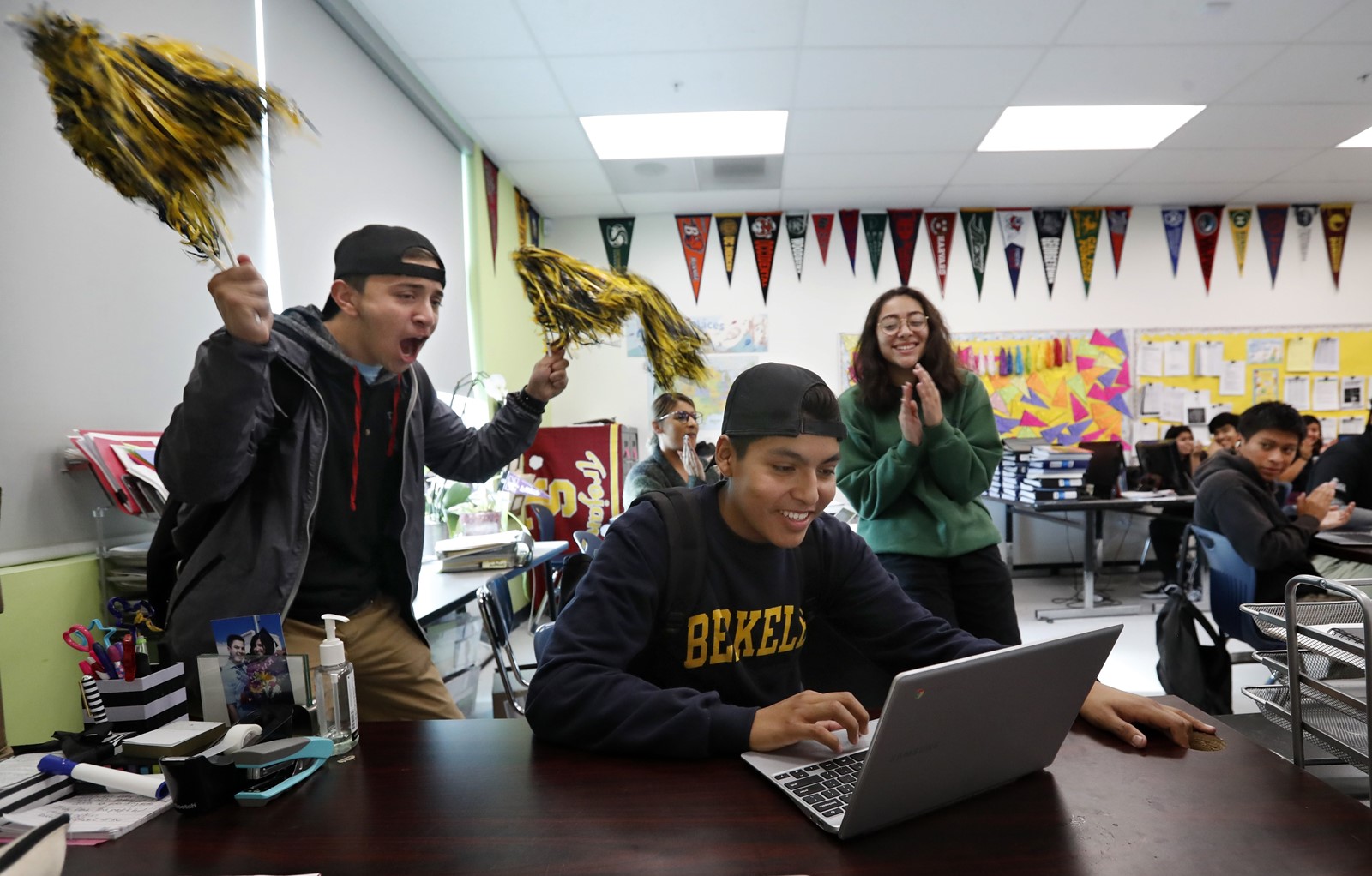 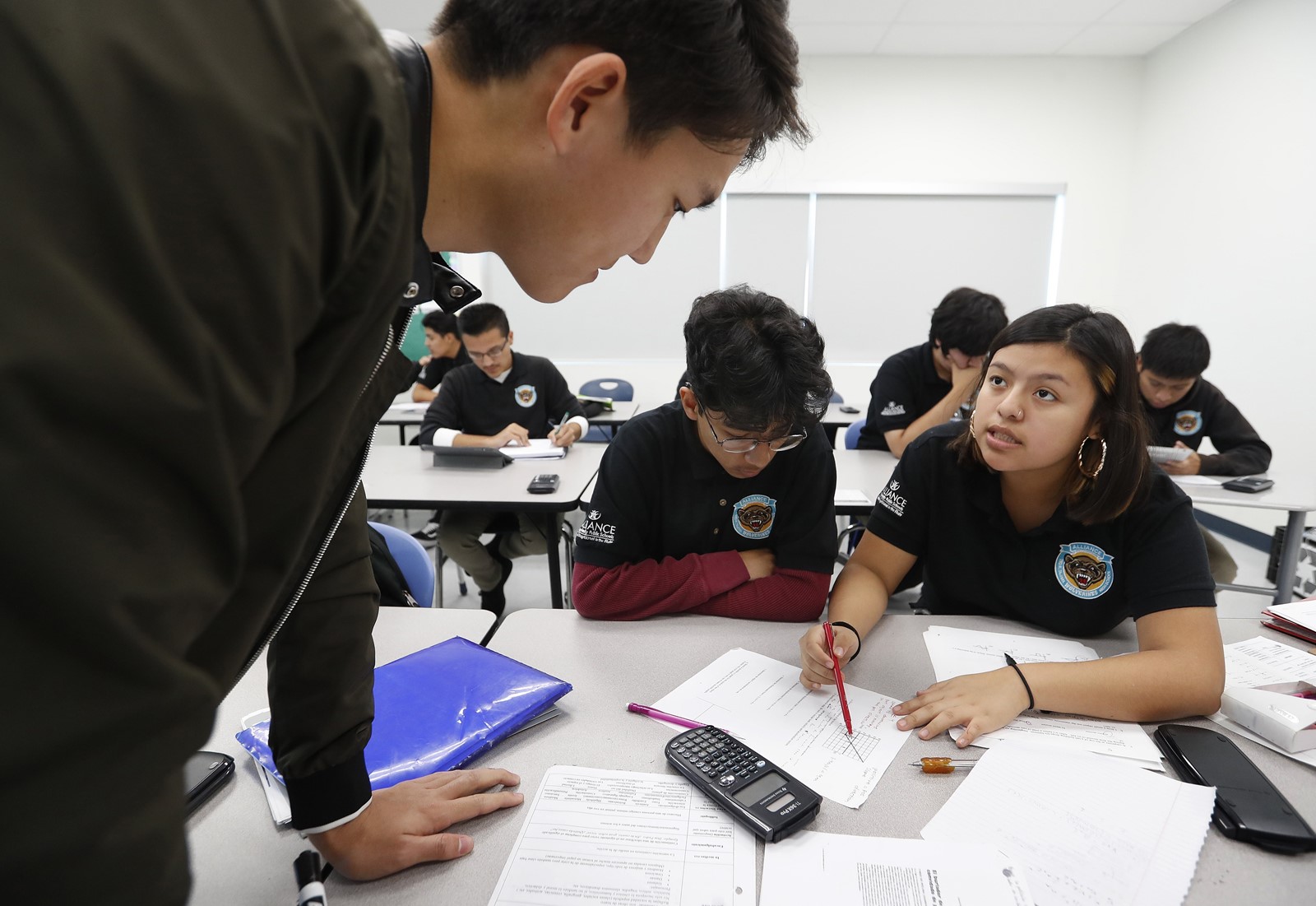 As a high school senior, Ruben Nevarez faced a difficult decision: attend Bucknell, a highly rated college in Pennsylvania, or stick close to home in Los Angeles and choose a more affordable option.

Bucknell University had offered Nevarez a generous scholarship, but he’d still have to take out substantial loans — and his family had little financial means to help.

Nevarez, who is now 20, stayed put, ultimately enrolling in Glendale Community College and continuing to live at home.

That decision may have made sense for him, but data assembled by Alliance College-Ready Public Schools, a local charter school group, suggest that many low-income minority students would do better opting for the more highly rated school — even at the price of taking on debt.

To give more guidance to families, Alliance has created a “Power 150” list of colleges most successful at helping students like Nevarez get to graduation. It has just begun making the list widely available. The list ranks colleges — from best to worst — based on the six-year graduation rate for black and Latino students.

The master list, which ranks about 2,500 U.S. colleges, becomes a jumping-off point for Alliance to create a personalized list for every junior and senior that includes reach schools — where students might not get in — and schools they are likely to get into as well as schools to which they are virtually certain to be admitted. In addition to graduation rates, the personalized list takes into account the availability of financial aid.

The typical student Alliance is trying to help would be the first in the family to graduate from college. Such students often have immigrant roots — and parents with a limited education and often with limited English-speaking skills.

In making the list, the team from Alliance, which operates 22 local secondary campuses, combed through federal data and doubled checked it against the experiences of their alumni.

Nevarez had stood out in 2016 as a senior at Alliance Tennenbaum Family Technology High School in Glassell Park, where he had a 3.98 grade-point average and impressive extracurriculars. Bucknell — where tuition is almost $56,000 a year — offered him a scholarship for his full tuition for four years.

But complete expenses run about $72,000 a year. Nevarez realized late in the application process that he still would need to take out tens of thousands of dollars in loans to cover travel to and from home and living expenses. He also didn’t know what he wanted to major in, which made him worry that he might need more than four years of study — and thus face added costs.

“Overall the financial burden with the loans, it didn’t seem realistic for me to pursue,” Nevarez said.

He also had been accepted by UC Irvine — but by the time he decided against Bucknell, it was too late to enroll at this well-regarded university and get financial aid that year.

While taking night classes at the community college, the 20-year-old works full time at a paving company for $15 an hour. “If there is work, I’m there,” he said. “Ten hours a day, 70 hours a week.”

The first is that the more selective colleges — that are harder to get into — seem to do the best, followed by other four-year colleges, followed by community colleges. (Community colleges are not on the “power” list, but data show that students who attend these two-year programs are less likely to have a college degree within six years of graduating high school.)

The second takeaway is that even within groups of similar colleges, there can be real differences in how students fare.

The third is that Alliance’s black and Latino students tend to graduate at about the same rate as do other such students at these colleges.

As a result, Alliance sees a tangible benefit in steering students toward schools with higher graduation rates and pushing hard to ensure they qualify for more selective programs.

The list’s top eight colleges in order are Brown, Pomona, Harvard, Notre Dame, Skidmore in upstate New York, Scripps, Davidson in western North Carolina and Emory in Atlanta. Each has a six-year graduation rate for blacks and Latinos of at least 95%.

All the schools in the Power 150 have six-year graduation rates for black and Latino students of at least 74%.

Below that top tier, the list gives each school a grade of B, C or D.

“The end goal is not just to get students to college but for them to graduate,” said Ivonne Polanco, the lead college counselor at Simon Technology High School in Watts.

The data can’t predict how any individual student will fare and one possible shortcoming of the list is that it could be giving some schools a higher or lower rank based on the student’s situation rather than the school’s performance.

After graduating from an Alliance school in 2016, Kimberly Jimenez, went to Dallas Baptist University, which has a D rating on the Alliance list, with a 41% graduation rate for black and Latino students.

She stuck it out a year before returning home, but she doesn’t fault the school, which she loved.

In her case, financial aid, a part-time job and help from a sister living in the area were not enough to make ends meet.

She returned home and got a job while attending community college night classes. Jimenez, 20, has since enrolled at California Baptist University in Riverside, where the overall cost is less.

Kimberly Bravo, 17, a senior at Alliance Ted K. Tajima High School, has used the Power 150 list as one important guide. Her first-choice college is Loyola Marymount in Westchester, with a 78% graduation rate for blacks and Latinos.

Her older siblings, who have not yet completed degrees, went to high schools that did not have to provide such a list of recommended colleges, but their experiences also are different.

For one thing, Kimberly’s parents — despite limited resources — hired a tutor when she began struggling academically. That did not happen with the siblings, who were in school when the family was going through harder times. Sister Stephanie and brother Anthony — and her Tajima counselor — are among those leaning on Kimberly to stay focused.

Brayan Justo, also a Tajima senior, faces additional challenges because, as a non-citizen, he doesn’t qualify for some scholarships. His mother, who works two jobs as a janitor, brought him to this country illegally from Mexico as a baby.

The Alliance team used the list to suggest colleges that seem a good fit with Justo’s stellar resume. One was UCLA, with an 84% graduation rate for black and Latino students. Another that caught his eye was UC Riverside, which he’d heard has strong support for undocumented students. Its rate is 68%.

“I want my college to be accepting of who I am and where I came from,” said Brayan, 17, who hopes to major in mechanical engineering or Chicano studies with a minor in math.

Nevarez graduated before Alliance was making customized college lists. The two schools he might have gone to, Bucknell and UC Irvine, each have a graduation rate of 82% for black and Latino students.

He wonders if things would have worked out differently if he’d made another choice.

“It’s always greener on the other side,” he said. “I do wish I’d gone to UC and had the experience of college life — meet the friends I would make for life and party every weekend.”

He commutes to work with his father, who also is in construction: “He is always telling me that I should earn a degree because he doesn’t want me to work as hard as he does.”

Nevarez remains determined to do so.

“I have a keen interest in engineering,” he said. “I hope to work in the field of electric cars. Even if it takes a little longer, I am 100% committed to getting this degree.”