Powerful storm helps fill badly depleted reservoirs in the north, though drought is far from over. 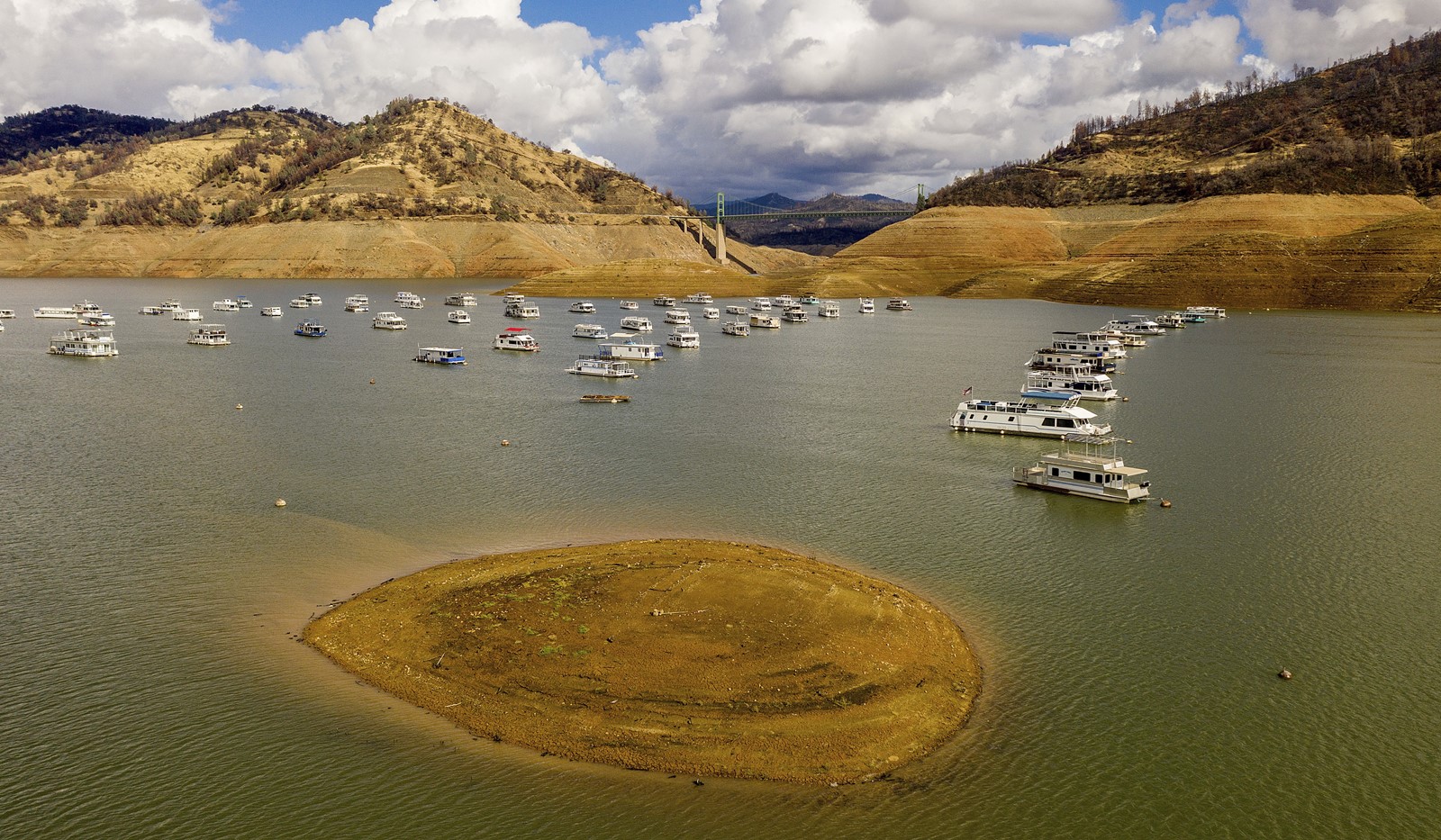 The drought-dried shores of Folsom Lake were damp this week after what officials called the first big storm of the season.

The water level at Lake Oroville, which receded so much this summer that officials had to close its hydroelectric power plant for the first time, rose by more than 16 feet.

And the Russian River — recently reduced to something more like a trickle — flowed with more ease after the atmospheric river dumped record-breaking amounts of rain across California, replenishing dwindled reservoirs and rehydrating cracked terrain.

Despite the mayhem the atmospheric river caused for some residents, the historic storm marked a welcome change for a parched California after a year of heat and drought with so little rain.

“If we could have designed a storm it would have been this one,” said Emma Detwiler, a spokeswoman for the Marin Municipal Water District, which saw its depleted reservoirs grow from 32% of capacity to 43% during the storm. “It’s a great step in the right direction.”

But while the massive plume of moisture helped, experts said it will take much more than one storm to make a dent in the drought. The 2021 winter outlook recently released by the National Oceanic and Atmospheric Administration found that dry conditions are likely to persist across much of the West through at least the start of next year.

“It’s been very, very dry for two years,” said Jay R. Lund, director of the UC Davis Center for Watershed Science. “One storm does not end that kind of a drought.”

The fast-moving storm shattered several records as it moved through the state Sunday and Monday. Downtown Sacramento saw a record 24-hour rainfall total of 5.44 inches, surpassing a mark set in 1880, the National Weather Service said.

City officials said the precipitation totals represented even more than a “200-year storm level,” which occurs at 4.6 inches and has only a 0.5% chance of occurring in any given year.

And in the San Francisco Bay Area, the 4.02 inches of rain that fell Sunday marked the wettest October day in downtown San Francisco, and the city’s fourth-wettest day in recorded history.

The storm was “unusual for this time of year in terms of its strength,” David Sweet, a meteorologist with the National Weather Service, said Monday. “It’s a very, very powerful storm.”

Before the storms, all three reservoirs were a quarter full or less.

“It definitely puts a new deposit into the bank account that was about to be overdrafted,” said Daniel Swain, a climate scientist at UCLA’s Institute of the Environment and Sustainability. “It really is going to help some of these smaller water districts along the coast that were really struggling, not tied into the state water system, and thinking about emergency contingency plans.”

One of those districts is Marin County, which has been faced with one of the state’s more challenging water crises because of its hyperlocal supply system. Most of Marin’s water comes from its reservoirs, and about 25% comes from the Russian River watershed via the Sonoma County Water Agency, Detwiler said.

The reservoirs received nearly 11 inches of rain during the storm — an “unheard of” amount so early in the season, she said. But it’s not enough to call the crisis averted, as 43% of capacity is still far from the 67% that is normal for this time of year.

“Even with this 10½ inches in 24 hours, we didn’t reach our average level of storage,” she said. “If we could have a couple more of these [storms], we could potentially see our reservoir storage back up to average.”

But big storms can also present challenges for residents as they move through the state — particularly in areas near recent burn scars, which are becoming more common as wildfires sear through more acres each year.

Residents near the recent Alisal fire in Santa Barbara County were ordered to shelter in place on Monday amid flash flood warnings as soil and debris — freshly untethered from burnt terrain — slipped and slid into roadways, jamming traffic and creating dangerous hazards.

Sunday night, many roads in Sacramento’s downtown area were inches deep in water, backing up traffic and leaving cars passing through water that reached halfway up their tires. Creeks overflowed near the American River, where many homeless camps are located, prompting officials to open shelters.

By Monday morning, about 125,000 residents across the state were without power, according to PG&E.

Power was also out on the Bay Bridge early in the day — only hours after video circulated of big rigs on the Richmond-San Rafael Bridge being blown over by the storm. Nearby crews and homeowners tended to downed branches in the streets, leaf-clogged street gutters and toppled basketball hoops.

But while cleanup crews may not appreciate the damage the most recent storm left behind, its net effect should be beneficial, Swain said. Not only did the deluge refill some reservoirs, but it also moistened the soil so that snow won’t be falling onto bone-dry earth.

“It’s a limited silver lining,” Swain said. “I’m optimistic that it takes some of the worst-case drought scenarios for next season off the table, but it by no means ends the drought.”

By most indications, the months to come will include more of that dryness — particularly in the southern part of the state. The NOAA outlook predicts below-normal precipitation and above-normal temperatures for Southern California through at least February.

South of the Bay Area, throughout Central and Southern California, “prospects for any drought improvement are slim,” said NOAA meteorologist Brad Pugh.

The northern part of the state may fare better, with Northern California likely to see some improvement in its drought conditions.

But California’s weather is often unpredictable, and the pendulum between extreme events seems to be swinging faster. Experts have said the whiplash between drought and rain — or fire and flood — is becoming more common as the effects of climate change take hold.

Sacramento, for example, broke its record for the greatest number of consecutive dry days in history just last week, the National Weather Service said — only to see its wettest-ever 24-hour period arrive by the weekend.