In the Year of the Pig, offering

some comfort to the doomed 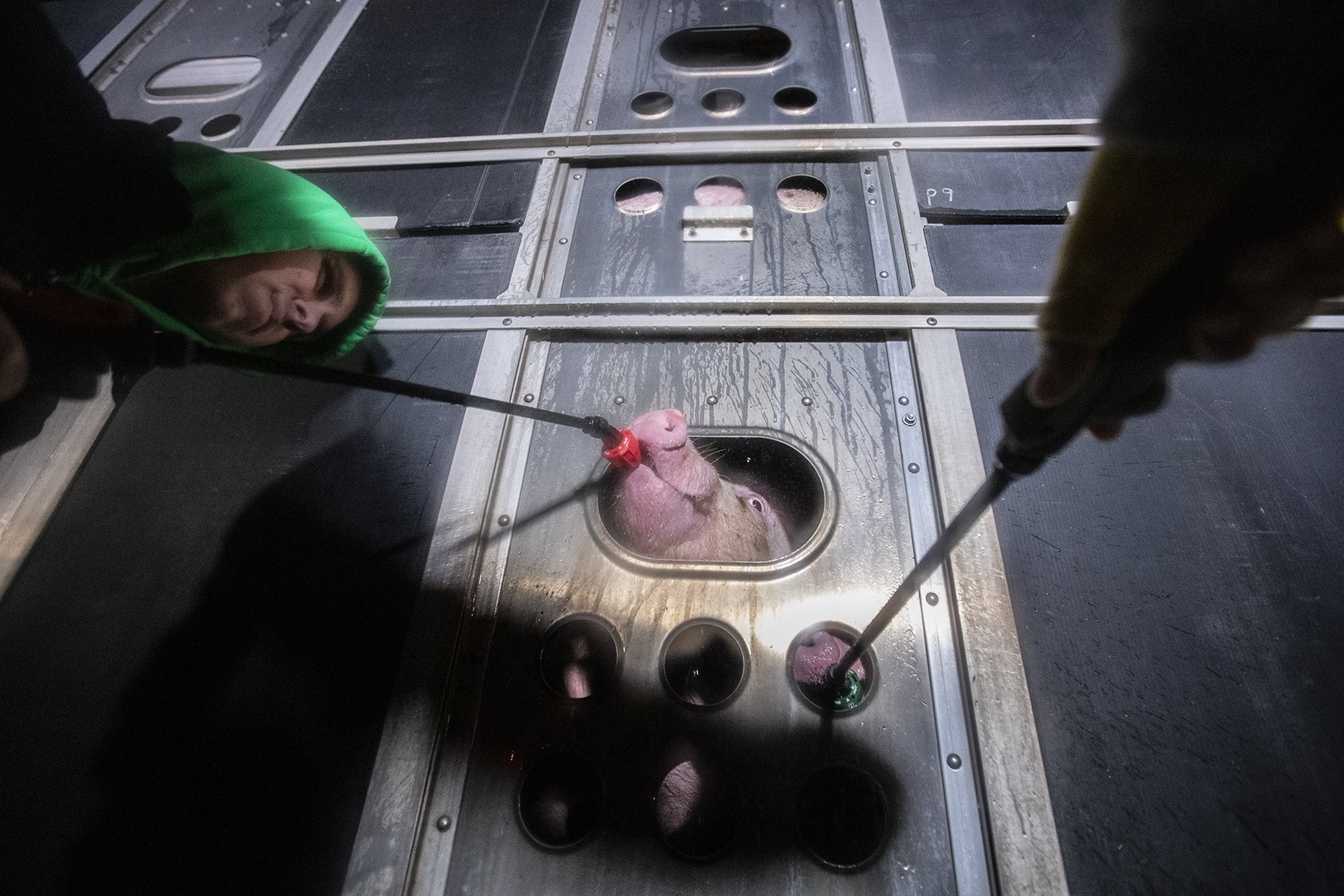 THIRSTY PIGS lap up water offered by activists outside the Farmer John slaughterhouse in Vernon. These “vigils,” as organizers call them, have occurred every Sunday and Wednesday night since early 2017. (Robert Gauthier Los Angeles Times)
PREVIOUS IMAGE

aya Benperlas stood in the middle of busy Vernon Avenue on a chilly Sunday night as a big rig hauling pigs slowed to a halt just outside the gates of Farmer John.

Her hand shot into the air and she flashed a peace sign.

The 18-wheeler’s driver listlessly stared ahead as about 60 animal rights activists, who had silently amassed across from the huge slaughterhouse, swarmed his double-decker livestock trailer.

Baby boomers and millennials, black-clad anarchists and Patagonia-sporting Westsiders pushed water bottles through the trailer’s grates to the startled hogs. People with pump-action sprayers splashed the upper deck. Two men lighted everyone with floodlights as others recorded the action, took photos or offered gentle massages to doomed 250-pound Yorkshires.

The pigs lapped up the water and offered satisfied grunts. “Good baby!” said a woman to one as it suckled on a bottle. “All for baby!”

For two minutes, the scene played out like a day at a petting zoo or county fair. Then Benperlas stepped away from the semi-truck, and Farmer John opened its gates.

The driver revved his engine as the activists sprayed some last mists of water at the pigs. The animals jostled to the rear of the trailer and stuck out their snouts. And then they were gone.

Inside, the trucker would unload his cargo, a small fraction of the 7,000-plus pigs Farmer John butchers every day. Outside, beyond the company’s colorfully pastoral mural of farm life and cavorting pigs, the activists waited for the next truck.

Sometimes the trucks come three at a time, sometimes every 20 minutes. Sometimes they don’t come for more than an hour. But they always arrive.

These protests — or “vigils,” as organizers call them — have occurred every Sunday and Wednesday night since early 2017. Advertised by word of mouth and on social media, they regularly draw 50 to 100 people: Californians from places such as Bell and Oxnard, others from as far as Japan.

Celebrities including Joaquin Phoenix and Rooney Mara have stopped by; a tearful Tony Kanal, bassist for No Doubt, once described the sight of pigs drinking water for the last time as “heartbreaking.”

Despite the strong feelings involved, the events defy the stereotype of uncompromising animal rights protests. They’re not overtly militant affairs, and there is no aggressive proselytizing. Just as strangely, perhaps, they have the blessing of the Vernon Police Department and Farmer John.

This equanimity hasn’t always been the case at the Vernon site.

In 2012, three women affiliated with People for the Ethical Treatment of Animals stripped down to their underwear and bound themselves in plastic wrap on human-size meat trays. Later that year, police arrested two activists who refused to stop blocking Farmer John’s gates.

None of that has happened during the vigils, and that has led to a peaceful detente so far.

“During any demonstration, [we] work with local law enforcement and protest leaders to ensure the safety of the protesters, our employees, our animals and the public,” Smithfield Foods, which acquired Farmer John in 2016, said in a statement. “Because of these coordinated efforts, the public demonstrations do not impact Farmer John’s production process or our ability to serve our customers and consumers.”

The demonstrations are organized by two nonprofit groups, the Animal Alliance Network and L.A. Animal Save. They’re associated with the Save Movement, a network of activists who promote veganism and “bear witness” outside slaughterhouses around the world to what they say is the innate cruelty of modern-day meat production.

“They’ve never experienced love,” said Emily Dent, who heads the Wednesday night vigils on behalf of Animal Alliance. “They were raised in warehouses and probably didn’t even get nursed. That little bit of water we give them — that’s probably the only love they’ll ever experience.”

L.A. Animal Save also has twice-a-month chicken and cow vigils outside processing plants in Vernon and Pico Rivera.

“You get 20 minutes to be with the chickens,” Dent said.

Amy Jean Davis, the founder of L.A. Animal Save, is credited with establishing the Farmer John demonstrations. She got the inspiration in 2015 when the flagship Save Movement chapter in Toronto invited Davis, a former “American Idol” contestant, to a “pig save.”

“I was around farm animals growing up,” said Davis, an Indiana native. “But I never saw them on a transport truck all crammed up like that. It was a surreal moment of me going to a car to get lunch afterward, and they were going to get gassed.”

Save Movement head Anita Krajnc — whom a Canadian judge found not guilty in 2017 of criminal mischief for giving water to pigs before they went into a slaughterhouse — asked Davis to head a group in Los Angeles. Davis said she wasn’t ready then. She signed on once attempts by others to start vigils at Farmer John failed at the end of 2016.

It was the perfect location for Davis: a well-known company; an urban area providing easy access for protesters; and a constant stench, somewhere between ammonia and sizzling , as a reminder of what goes on inside.

She began with one a month. “But it didn’t feel right,” she said. “Farmer John never stops.” So she started going once a week.

For Davis, such activism is more than just about the pigs.

“We’re against oppression, and animal agriculture is full of oppression,” she said. “Farmers are oppressed. Farmer John is next to low-income areas. And the smells. There’s just rampant oppression all around, and we’re not OK with any of it.”

As people at the vigils give the condemned pigs water, the connection they feel with the animals, often instantaneous, is understandable. From the revolutionaries-turned-authoritarians in “Animal Farm” to the soulful runts of “Babe” and “Charlotte’s Web” to Zhu Bajie, one of the heroes of the classic Chinese novel “Journey to the West,” no farm animal is given more life or character. (This Chinese Lunar New Year ushered in the Year of the Pig.)

But the dissonance between respect and repast in Southern California goes beyond Farmer John’s mural. Barbecue pits and taquerias frequently depict artwork of hogs cooking themselves, or fleeing from grinning cooks. Generations of Angelenos grew up on Vin Scully’s velvety voice extolling the virtues of Farmer John bacon, sausage and Dodger Dogs.

It’s a disconnect that vigilgoers frequently bring up.

“They’re three times smarter than dogs, and we worship dogs, “ says Rose Beemer of Calabasas, who attends only on holiday weekends. “But we kill pigs for food.”

The Sunday and Wednesday vigils are virtually identical except for length: The Sunday protest lasts two hours; Wednesday’s goes on for four. Organizers line electric tea candles on the sidewalk outside the gates and set up a table to sell T-shirts and bumper stickers.

A group of women threads fresh daisies and carnations through a chain-link fence where Farmer John employees park. Sometimes, people screen graphic slaughterhouse footage against the walls of the facility.

Around 7:30 p.m., the lead organizer for the night gets on a microphone and goes over the few rules: Obey all commands. No flash photography, because that’ll startle the pigs. Look both ways before crossing the street.

“Come up nicely, calmly,” said Benperlas during a recent action. “The pigs feel your energy, so be kind and show love. Try not to be too sad in front of them.”

The trucks’ routes are familiar: They always head east on Vernon Avenue after making a left from Soto Street, about a football field away from the plant’s gates. Their diesel engines, wide turns and tall, distinctive trailers announce their arrival.

Someone yells, “Truck!” and attendees quickly prep. Bottles are distributed; jugs are filled. The leader that night stands in the middle of Vernon; the officer on patrol directs bewildered drivers around the stopped rig.

Everyone else tends to the pigs.

Farmer John technically gives activists two minutes, roughly the time it takes for the drivers to check in with security. But the wait can be longer. The activists take advantage of every second.

One recent night, Roxanne Vasquez of Victorville brought her daughter, 23-year-old Angelica Gonzalez of Fontana, for the first time. As she and her mother took turns pumping a sprayer, Gonzalez said: “It’s a sad reality check. This is your bacon here, scared.”

“Seeing how thirsty they were crushed my heart,” said Theodore Diep of Santa Ana, another first-timer. “At least I could do something for them in the last bit of their life.”

Malibu psychotherapist Wayne Johnson, who has attended every Sunday night for over a year, walked around with a portable speaker that played soothing music better suited for a spa.

“It’s not like people have reached out to them before with any degree of compassion,” he said. “Even though we’re not going to save one single pig, what we can offer for just a second is basic decency for a living being.”

Eder Lopez of Pomona grew up in a Honduran household where “if I didn’t see any flesh, I was like, ‘Ew what is this? Vegetables?’ ”

Now, Lopez helps organize the Wednesday vigils and frequents the Sunday ones. He tries to put himself in the pigs’ place.

“When you see these trucks come in, just imagine yourself in them,” he said. “Would you want someone to comfort you, even if just two minutes?”